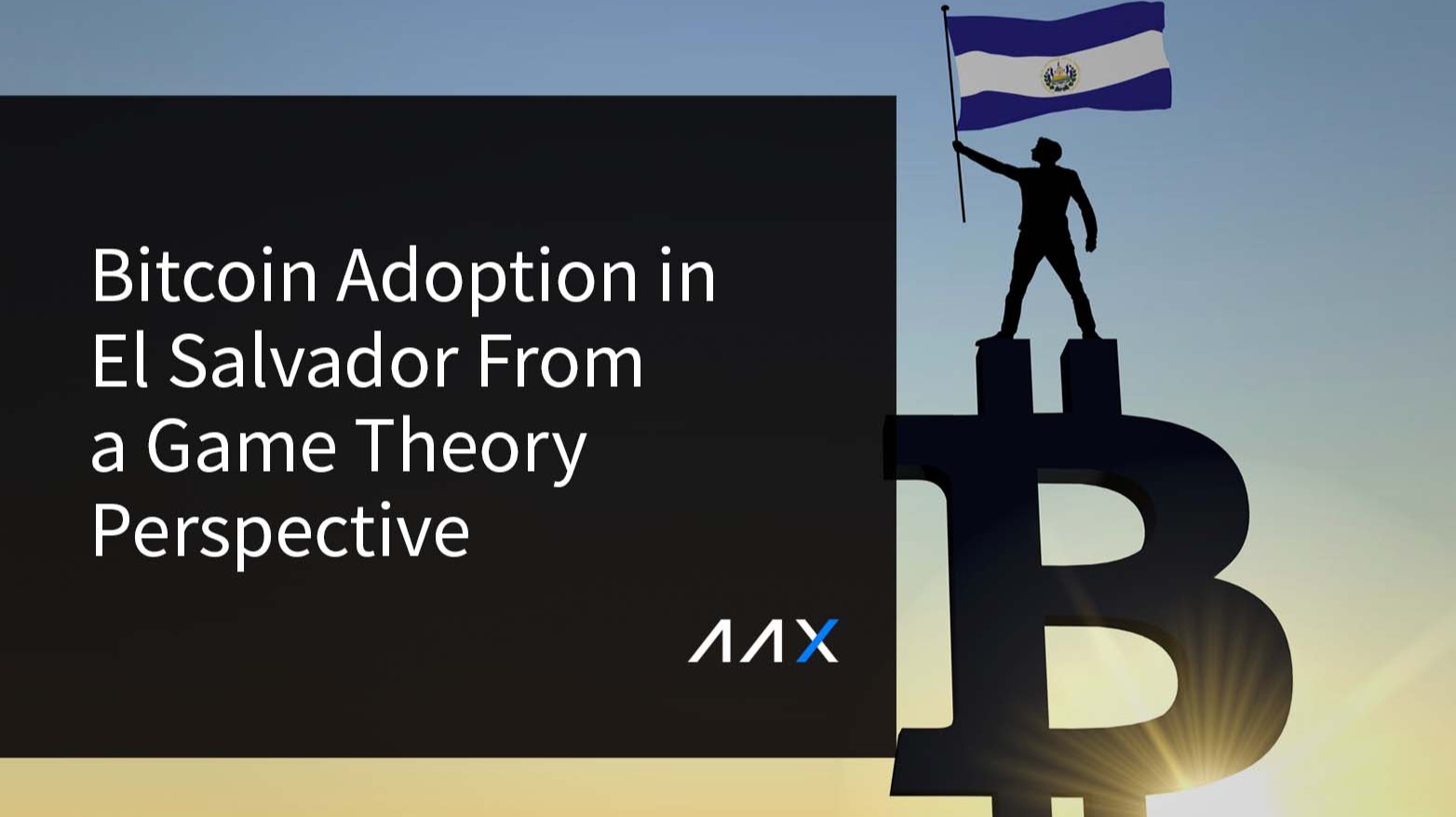 In 2021, many innovative ideas came to life in the crypto industry - the explosive boom of NFTs, the introduction of the metaverse, the emergence of DeFi 2.0., and the list goes on. Many may not realize this yet, but with the cryptocurrency industry at such a nascent stage, we are currently experiencing history in the making. One of the biggest leaps made last year was arguably El Salvador’s bold move of making Bitcoin the official legal tender of its country on September 7, 2021. From a game theory perspective, El Salvador’s adoption of Bitcoin as legal tender rocked the cryptocurrency world and the benefits of being a first-mover seemed to outweigh the consequences. This strategic and courageous step taken by El Salvador may perhaps be remembered down the cryptocurrency timeline as being a crucial catalyst for change. So will history repeat itself, with other countries following El Salvador’s footsteps? And if it was such an advantage to adopt Bitcoin as a legal currency, why have other countries not leaped at the opportunity to do so yet?

Simply put, game theory is the study of strategic decision-making by a group of individuals in an interactive environment. Your strategic move as well as that of the players around you have a direct impact on the outcome and how much you gain from it. In the case of El Salvador, the first country in the world to adopt Bitcoin as legal tender, the financial decision played in its favor because it served as a rebranding strategy and it drew global media attention. Additionally, unlike other countries, El Salvador did not have its own national currency at the time of adoption, relying instead on the US dollar for the vast majority of its transactions. This is why El Salvador is a perfect sandbox to evaluate whether Bitcoin can stand the test of time as a country’s official digital currency. However, many underestimate how difficult it is to transact fully digitally, and the irony lies in the fact that digitalization is widely promoted as being the future, to the extent where analysts have hypothesized that digital currencies may one day replace fiat in daily transactions. But will it really make everything better to annihilate fiat currency altogether?

Why make Bitcoin the national currency?

The decision to make Bitcoin the official digital currency of the country was set in motion by Nayib Bukele, El Salvador’s tech-savvy president. It served its rebranding purpose, drawing global attention from both crypto enthusiasts and from those indifferent to the potential of digital assets. Bukele hoped that this move would fuel the economy and encourage other countries to trade with El Salvador. Another reason motivating him to officialize Bitcoin as the national currency of El Salvador is the idea that Bitcoin will provide basic financial access to the unbanked, namely 70% of El Salvador’s population. It will also reduce the cost of sending and receiving remittances, which make up approximately 22% of El Salvador’s GDP. Needless to say, this move will serve as a big test for Bitcoin, to prove its value as a viable medium of exchange over time.

The benefits of officializing Bitcoin for El Salvador

Being the first to adopt Bitcoin as legal tender has its advantages. This is especially true if Bitcoin’s nascent nature is taken into consideration. The cryptocurrency has not yet reached its full price potential, according to many market experts. Furthermore, as it reaches maturity and appreciates in value, Bitcoin is expected to become less volatile in nature. This will play in its favor as most El Salvadorians are currently wary and skeptical about the cryptocurrency due to its fluctuating prices and what this volatility will do to their savings.

Additionally, adopting Bitcoin as legal tender comes with first-mover advantages for El Salvador. As a developing country, it suffers an even bigger risk than other countries of being left behind in this era of digital revolution. Countries like the United States of America and China, who figure among the most advanced economies in the world, already have a structured financial system set in place that leaves no obvious place for the adoption of a second national currency. Unlike the USA and China, El Salvador disbanded their own national currency and chose to adopt the US dollar as the official currency prior to crowning Bitcoin the country’s official legal tender. Currently, although Bitcoin is officially El Salvador’s official tender, many still prefer to use the US dollar for transacting and storing value. As for Bitcoin, it is mostly used to facilitate payments and transactions. This may however change over the coming years as people get more used to Bitcoin and the cryptocurrency experiences worldwide adoption.

Currently, most citizens have cited concerns over Bitcoin’s financial stability as a deterring factor. That coupled with the fact most Salvadorans have transacted with the US Dollar for so long is enough to sabotage Bitcoin's popularity within the region. The International Monetary Fund had even warned El Salvador of the risks of using Bitcoin as legal tender. In a statement shared by Reuters, the IMF elaborated on this and said, “Given Bitcoin's high price volatility, its use as a legal tender entails significant risks to consumer protection, financial integrity, and financial stability. Its use also gives rise to fiscal contingent liabilities." However, keep in mind that the IMF and other traditional financial institutions are more concerned with maintaining financial stability than they are with changing the status quo and the overall global financial landscape.

Why have other countries not followed El Salvador's footsteps yet?

As Bitcoin still consists of relatively uncharted territory globally - with the traditional financial market drawn as a comparison to illustrate this - it should be normal and even expected that it comes with trade-offs. Although the leading cryptocurrency may still be relatively volatile in nature and much of its characteristics have yet to be understood globally, El Salvador is getting ahead of the crowd and making strides with its early adoption of Bitcoin. One thing can be certain - that Bitcoin is here to stay. Looking forward, it will either be incorporated into traditional financial markets in the generations to come, stand on its own - in parallel with other financial systems- or replace existing economic structures. And with a bold and innovative leader like President Nayib Bukele, El Salvador may stand a chance in revolutionizing and restructuring its economy through Bitcoin. Despite criticisms, Bukele has advocated for Bitcoin, saying it will help refuel El Salvador’s economy. He has also argued that Bitcoin will facilitate transactions for millions of Salvadorans living abroad who send remittances back home on a regular basis. Finally, he hopes that the cryptocurrency will provide financial inclusion, investment opportunities, tourism, and economic development for El Salvador.

So why have other countries not yet jumped on the bandwagon and scrambled to adopt Bitcoin? To understand this, it might be wise to look at the dot-com bubble that took place in the late 1990s. During this time, the Internet as we know it today was still very much in its infancy, but mass adoption of the innovative digital network had already begun. During the dot-com bubble, a lot of speculation in relation to tech stocks and the Internet was made. An explosive appreciation followed by a downfall of numerous tech stocks were witnessed, and there were many who doubted the Internet’s potential during this period of uncertainty. However, fast forward thirty years, the Internet has become a staple component of our everyday lives. The same can be forecasted for Bitcoin. With the cryptocurrency still being in such a nascent stage, many have speculated on its worth and its value, such as traditional investors like Ray Dalio.

One thing is for certain: Being the first to adopt Bitcoin as legal tender may have its disadvantages, as this is still uncharted territory. Despite Bitcoin’s ease of access and convenience, many in El Salvador will also run the risk of not being able to take advantage of this digital currency. This can perhaps be due to their lack of knowledge when it comes to the realm of blockchain and cryptocurrencies. Although Bitcoin and altcoins have certainly gained the spotlight over the past few years, there still remains a need to educate the masses regarding their functions and characteristics. However, with as passionate a businessman and innovator as Bukele heading El Salvador, its population may perhaps grow to embrace Bitcoin in the generations to come. Creating an ecological ‘Bitcoin City’ backed by BTC bonds and fueled by the geothermal energy of an inactive volcano seems to be one of the first initiatives - with others to come - implemented by Bukele to revive El Salvador’s economy.

To stay up to date on announcements and new features, please follow AAX's social channels!

AAX Exchange is a crypto exchange that was founded in 2018. Favored by more than a million users globally, AAX prides itself in being the first exchange to make the switch to the Satoshi Standard (SATs). To gain insights into AAX, please follow this blog.

Emerging Markets in the Crypto Space

To learn more about how emerging markets have been driving the adoption of Bitcoin and cryptocurrencies forward, please keep reading.