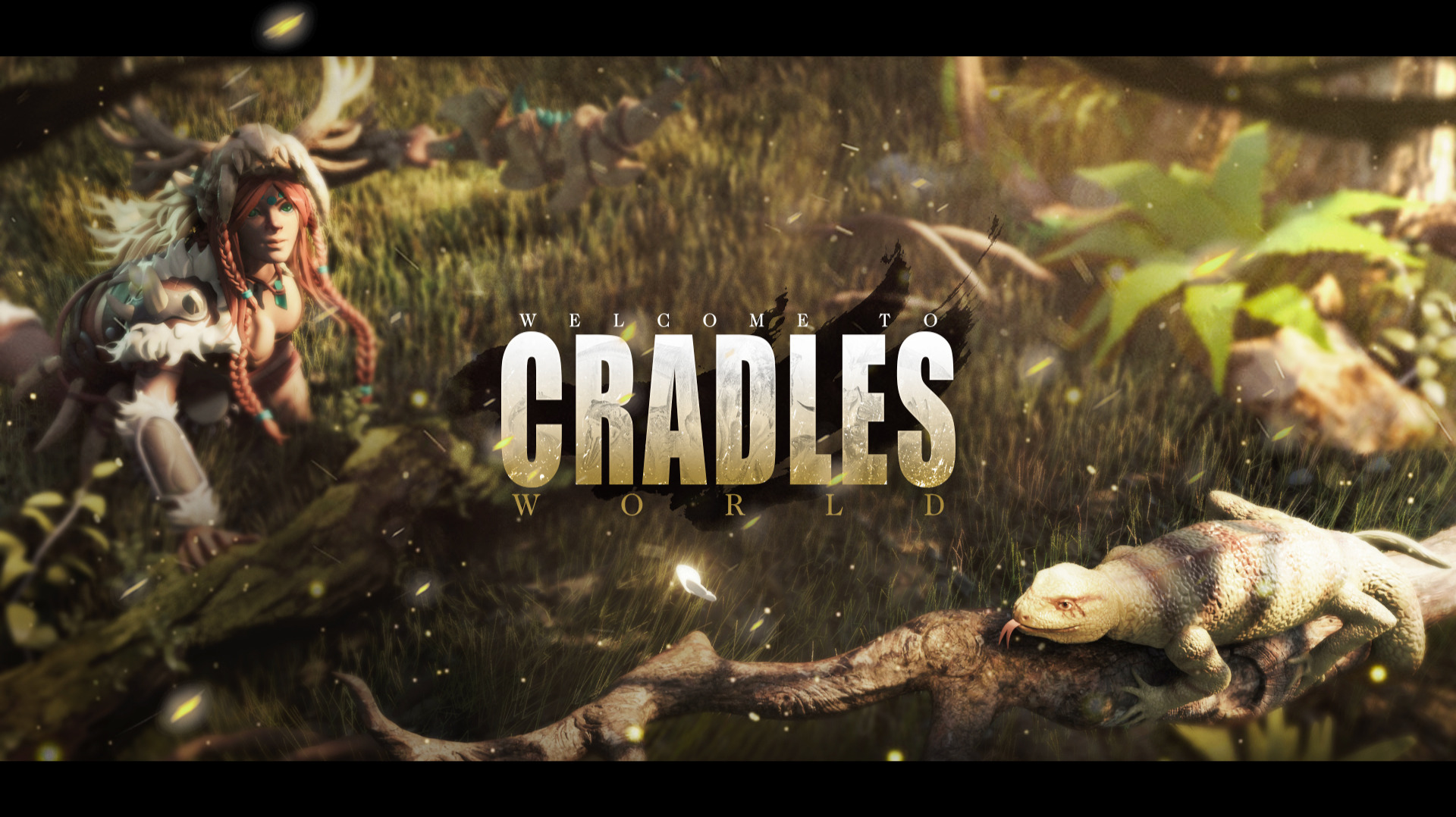 Cradles: Origin of Species is a new virtual reality game powered by blockchain that lets you use your VR device for an immersive experience, choosing from a wide range of species to play as and exploring the virtual world from your soul. In case you’re new to Cradles, start with this introductory post to learn more about the game.

Metaverse is typically pictured as a sort of digital “jacked-in” internet — an expression of the actual reality, but one based in a virtual world, such those portrayed in Ready Player One and The Matrix. It’s “the newest macro-goal for many of the world’s tech giants,” according to Matthew Ball, venture capitalist and former head of strategy at Amazon Studios.

The metaverse term was first introduced by science fiction writer Neal Stephenson in his 1992 sci-fi novel, Snow Crash, where users interacted with digital forms of themselves called “avatars”. In a nutshell, the metaverse is the digital world where anything we can imagine can exist parallel to our real world. It’s important to recognize that the metaverse is not a game; it’s a place in which users invest in and build proper ‘empires’. It is thought to be very likely that in the future, people will be connected to the metaverse most of the time, similar to the internet and mobile phones today. It will become a part of our everyday life. At DRepublic, we believe that the metaverse will encompass a virtual economy many times larger than our entire current global real world economy.

I know it sounds strange, right?

In reality we haven’t yet come to a consensus as to what an actual metaverse might look like and there’s no universally agreed-upon description, but there are at least some widely recognized characteristics that demonstrate one, so let’s see them:

But let’s not forget, you can’t have a truly open economy if there is a central actor controlling the assets or user capabilities. Only open, interoperable specifications and decentralized, permissionless, Turing-complete smart contract platforms (like the Ethereum Virtual Machine) are able to support the ownership economy needed for the metaverse to thrive. Today, we’re seeing just a small fraction of what the metaverse may soon become. This growth looks very similar to how the internet emerged from the 1990s.

Now that we have an idea of what the metaverse should look like, we consider the state of blockchain gaming, where the biggest issue is that most of the iterations today exist as a blockchainization of traditional games instead of being native blockchain games.

Attempting to change this narrative poses the question: how can we create native blockchain games, using certain characteristics of blockchain technology to unlock new gaming aspects that traditional games are incapable of?

In recent years, with the development of virtual reality (VR) games and tremendous progress on computer technologies, such as rendering engines, more and more players and investors have fantasized about the concept of metaverse. Today, gamers earn huge profits by playing games such as Axie Infinity and CryptoKitties, but these only scratch the surface of what might be possible with blockchain, focusing on the NFT aspect of it.

The fantasists of blockchain gamers dream about the arrival of the metaverse and look for these opportunities in existing games but they don’t do much from an economic perspective to hasten the arrival of the metaverse. The profiteers search for games with the most potential to earn, setting aside the desire for superior games. To solve this dilemma of divergence, we propose a metaverse theory that attempts, for the first time in gaming, to combine reality with ideals. Our theory presents a guideline for the basic form of metaverse which game designers can use to analyze and improve all blockchain games aiming for the metaverse goal.

After a scrutiny of the metaverse, traditional MMORPG games, and the real world, we propose three theorems that the metaverse must follow to meet the design of the hypothesis. Whether it is a game or a world, does not need establishing, but it must meet these conditions to become a metaverse.

Note: Check out our published paper by T.Y our founder, on the meta universe theory which was ranked first in the download volume of 10 disciplines (including philosophy, game science, sociology.) on SSRN e-journals.

An examination of traditional games finds that very few of them, if any, feature an ability to increase entropy. In fact, the concept of time in most games does not even exist, beyond perpetual cycles of game sessions. First of all, we need to find the constant law of the blockchain world, using block time to simulate real game time, which will be a brand-new way for all blockchain games to define time. Entropy increase is one of the most important laws in the universe. With a proper time mechanism, Cradles has become the first dynamic entropy-increasing game world.

The game is set in the Triassic age. This time period took place roughly 251 to 199 million years ago on Earth. The environment was one full of violent volcanic eruptions, a distinct event of climate change which is believed to have triggered the extinction of more than 90 percent of Earth’s species. This was also the time which saw the emergence of many new creatures, including rodent-size mammals and the first dinosaurs.

Players will start the game as a ‘NewMan’ born in the Triassic — hunting, living, and fighting against various bosses and “dark” creatures bent on destroying the world.

Cradles is the first blockchain game in a prehistoric setting using a dual token system to enable entropy increase or true time lapsing.

One of these tokens is called the DRPC platform token, which only exists outside of the game. Our platform token can be used to purchase tickets for Cradles games and other game launches. Only players with the admission ticket NFT can enter the game. We will run different auctions to crowdfund our platform token and build pools to distribute them to our users. Users holding our platform coins can choose to stake or provide liquidity to obtain more coins in the future.

Our in-game tokens are the CRYSTALS, which players will be able to consume directly within the game. As we do not want players to lose the right to enter the game due to the volatility of DRPC, we will provide a relatively stable exchange rate between DRPC and the in-game CRYSTALS. In other words, no matter how much DRPC rises, players can still enter the game cheaply. Our aim is to provide decentralized game services for all players, not just for wealthy ones.

We believe that CRADLES can create a better world for players with a living, breathing economy completely reliant on mass player interactions.

The value in reality needs to be tested by time, and the value in blockchain needs to be tested by blockchain time. Therefore, for the first time ever, ERC-3664 or Time-NFT, has the nature of changing its attributes with time, and can be modified or upgraded over time. Imagine, for instance, that after a very long blocktime, an iron sword may become a rusty iron sword, or an antique iron sword. This will conform to the laws of real-world physics — something unique that has never been attempted before in the gaming industry. We will also provide some special minerals, called TimeSpaceSand. Players can use these to travel to different magical worlds in the game, for instance, to the future or the past.

Civilization in the game will develop as soon as players reach a certain level of governance, such as building towns and gaining new technologies like mills, waterwheels, etc. Through player progressions in technology and governance, the game will advance through era progression, such as from the Triassic age to the Jurassic age.

Our target is to create a pure land for game lovers and game designers in the mixed blockchain game market today. Our studio is focusing on developing next-generation blockchain games which you haven’t seen or played before.

We are a community-driven project, run by our foundation and focusing on the innovation of game content and token mechanism. We won’t copy any traditional gameplay patterns, but utilize the power of AI and game engine advancement to provide fresh gameplay. Cradles: Origin of Species, will contain original titles that will deliver new narratives and meaningful experiences to gamers.

Join the conversation and get the latest updates!