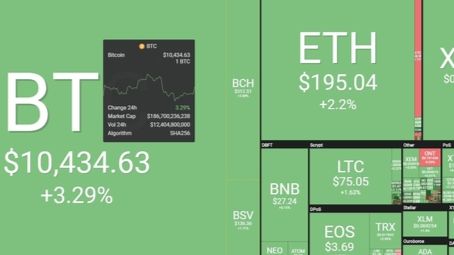 The Dow tumbled more than 130 points at the opening bell. | Source: Yahoo Finance

Stock futures recoiled in pre-market trading after China dropped a bomb on already-tense trade negotiations, setting the Dow up for a brutal end to an otherwise-excellent week.

Beijing revealed that it would impose new tariffs on $75 billion worth of US imports. The duties, which range from 5% to 10%, target US goods like soybeans, auto parts, and oil.

However, there is a gradual uptrend forming from the lows hit on August 22. At the same time, Bitcoin is supported by strong-term technicals. The Moving Average Convergence Divergence (MACD) has made a formidable stride into the positive region. In this case, traders need to be on the lookout for an impending positive divergence. The bullish divergence will signal stronger momentum with a potential to sustain gains above $10,200 ahead of the weekend sessions.

Bitcoin has managed to edged higher in today’s session, although its position has remained rather unstable. The coin rose to a high as $10,237.68 earlier today, but has since pulled back to slightly lower levels. At the time of writing, the Bitcoin price was hovering around $10,150 level, according to data from digital currency tracker Coinmarketcap.

Why Bitcoin Being Talked About by Money Managers Is a Good Sign [newsbtc.com]

In a recent podcast interview with Stephen Livera, PlanB, a prominent industry analyst that is domiciled on Twitter, explained that quantitative analysts have been following his work, as have institutional investors. He added that they have begun to express interest in potentially using PlanB’s model to map out investment strategies.

Would it be crazy to suggest that Twitter buzz about Bitcoin will increase demand? No, not really.

The market chop has continued and there is no sign of clear direction at the moment which makes the fear and panic totally superfluous. Yesterday the bitcoin fear and greed index dropped to its lowest level for over a year hitting 5, today it is back up to 33. Crypto warlord John McAfee called for a halt to this unnecessary panic:

Bloomberg Intelligence analyst Mike McGlone says mounting concerns about the global economy could boost Bitcoin in the long term. For now, McGlone told on Bloomberg TV he believes BTC is consolidating after its quick rise to nearly $14,000.

“I think it’s backing and filling its gains. It got up to around $14,000 recently and it’s pulled back to just above $9,000. It’s just basically retracing the big bear market from 2018. But it went too far too fast. It’s up about 200% on the year. The significance is the broader market like the Bloomberg Galaxy Crypto Index is up only 60%. So it’s Bitcoin breaking away from the pack and right now it’s just backing and filling.”

Despite BTC’s Price Rollercoaster, This New Astounding Report Suggests Its Dominance Is Actually Above 90% [zycrypto.com]

As stated in its blog post, Coinbase crypto exchange has launched a new feature to make life easier for its users.

With WalletLink, users of Coinbase Wallet will now be able to have access to their favorite decentralized applications on a vast array of desktop browsers by simply scanning a Wallet Link QR code with their Coinbase crypto wallet app.

The team says the WalletLink feature acts as a secure bridge between the Coinbase Wallet app and a desktop browser, enabling Coinbase customers to use dApps anywhere without exposing their hard-earned cryptoassets to external threats.

Speaking with the Financial Times, one partner said:

“I think it’s going to be difficult for partners who want to be seen as in compliance [with their own regulators] to be out there supporting [Libra].”

Another member said Facebook should have come to an agreement with regulators before launching the project.

“Some of those conversations [about regulation] should have taken place before the launch, to understand how regulators would think about this, so there wasn’t so much pushback.”

Winklevoss Twins on Bitcoin: ‘Wall Street Has Been Asleep at the Wheel’ [cointelegraph.com]

The Winklevoss twins — Bitcoin (BTC) bulls and founders of the Gemini crypto exchange — say its retail investors who are still largely reaping the benefits of the crypto market.

In an interview with CNN Business on Aug. 22, Tyler and Cameron Winklevoss gave their perspective on Bitcoin as an investment, industry risks and the traditional financial sector’s approach to the new asset class.

Miller Lite discusses the games in a blog post from June. It launched a 12-question trivia game, Great Taste Trivia, at the beginning of July and which is available on smartphones in over 230,000 bars and restaurants around the US. This latest iteration of the company’s trivia games is an extension of its “Know Your Beer” marketing efforts and runs through the end of September. Geofencing helps limit play to establishments that have an alcohol license and participants have the opportunity, if they win, to pick up $5 to use toward the purchase of one of the company’s beers.

Also, KuCoin reported issues with their services, and rushed to explain this situation to customers on its website:

“Due to the overheating of part of our chassis in the machine room we deployed in AWS, Tokyo, part of our services might become unavailable. The engineering operation team is currently deploying relevant resources of high availability across regions to deal with any possible emergencies that might happen. Some services might be effected during the deployment.”