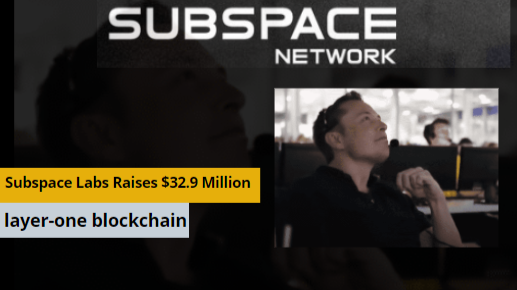 Project that opens the next wave of crypto adoption by supporting NFT, GameFi and Metaverse at the web scale. Don't miss out on the diamond!

What kind of diamond do we have in our review today -Subspace Network? Let's figure it out. 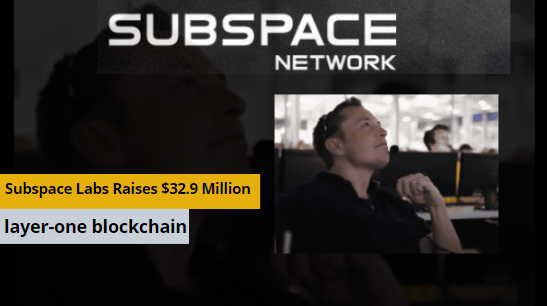 Blockchain Subspace wants to solve several fundamental problems in the cryptocurrency world. There are constant problems associated with: the environment, sustainability, increased centralization and lack of scalability for many projects. To solve these problems, the project offers proof-of-capacity (PoC). Analogues familiar to us on PoC: Chia, Spacemesh, Filecoin. Now these guys have a worthy competitor!

The big plus of the project is its integration with existing blockchains, second-level protocols and decentralized applications. 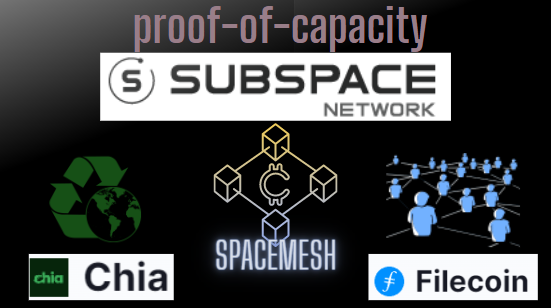 This is L1 blockchain with Polkadot & Kusama interoperability, in the future and L2 of ether, funded by grants from the US National Science Foundation and the Web3 Foundation.

Subspace Network - a network that will allow developers to quickly deploy decentralized Web3 applications that can automatically scale as needed.

Proof-of-capacity experiments have been done before, most notably with the #Chia blockchain of BitTorrent co-founder (Bram Cohen’s). But Subspace's CEO (Jeremiah Wagstaff) claims that their one-disk-one-vote consensus system is even more energy efficient and has other benefits, including file storage.

Wagstaff says that in addition to the consensus mechanism, Subspace allows data to be stored much cheaper than other blockchains, incentivizing users to run archive nodes that store historical data related to a particular blockchain. To store data in Subspace, “you just write the data into the history of the blockchain, but we kind of designed that from the beginning, so there is a pricing function for it. The more storage space on the network, the cheaper.”

As we know, it is impossible to store an infinite amount of data indefinitely. There will come a time when something will have to be sacrificed: decentralization or the “quality” of data. You can read about this issue in detail here: https://assets.website-files.com/61526a2af87a54e565b0ae92/617759c00edd0e3bd279aa29_Subspace_%20A%20solution%20to%20the%20farmer's%20dilemma.pdf

How does Subspace solve this problem?

Subspace operates on the basis of the proof-of-archive-storage (PoAS) consensus or “proof of storage of the archived history of the blockchain”.

Subspace farmers (not miners) store as many unique segments of blockchain history as their disk space allows. They store history collectively, which allows them to work as a single distributed archive node. A farmer does not need to maintain 2 tons of ssd to store the entire history of the blockchain. The farmer can only store the segment/s. The more spaces a farmer allocates, the more likely he is to be selected to create a block.

More farmers in the network - more expensive transaction - more profit for the farmer. This is due to the fact that new information must be stored on more disks. 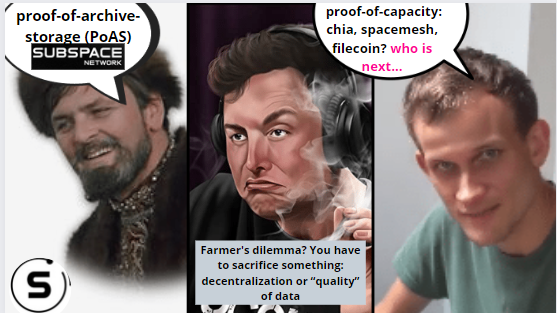 One of the terms coined by Vitalik Buterin is the blockchain trilemma! Which means that:

to describe the challenge of creating a scalable, decentralized, and secure blockchain, stating that only two of these three functions can be implemented at the same time.

The farmer collects potentially valid transactions in a bouquet and sends them to the executor for verification and completion. Executors are a separate class of nodes that maintain the full state of the blockchain. The farmer and the performer share the reward for processing the transaction.

The performer is selected based on his stake:

more steak -more likely to be elected to complete the block -more reward!

Everyone can become a farmer and collect blocks by providing their free disk space. But in order to sign and complete them, you need to be the chosen artist.

The Aries public testnet is underway. After it starts Insetwise - Gemini, where performers will be added.

The team announced that they will reward early testnet participants and provide an opportunity to participate in the public sale of their token.

You can put a node according to the guide: https://nodes.guru/subspace/setup-guide/en

You can upvote node according to the guide https://github.com/subspace/subspace/blob/main/docs/farming.md

p.s Subspace - "the first fourth-generation blockchain" created for cryptocurrency creators and designed to balance scalability, security and stability. Subspace will enable developers to unlock the next wave of crypto adoption by supporting NFT, GameFi and Metaverse at the web scale! All information is taken from public sources! I tried only to structure the information and convey to you the main aspects! Conduct further research yourself and study the project website! More information can be found in the discord of the project! Good luck to everyone and thank you for your attention!