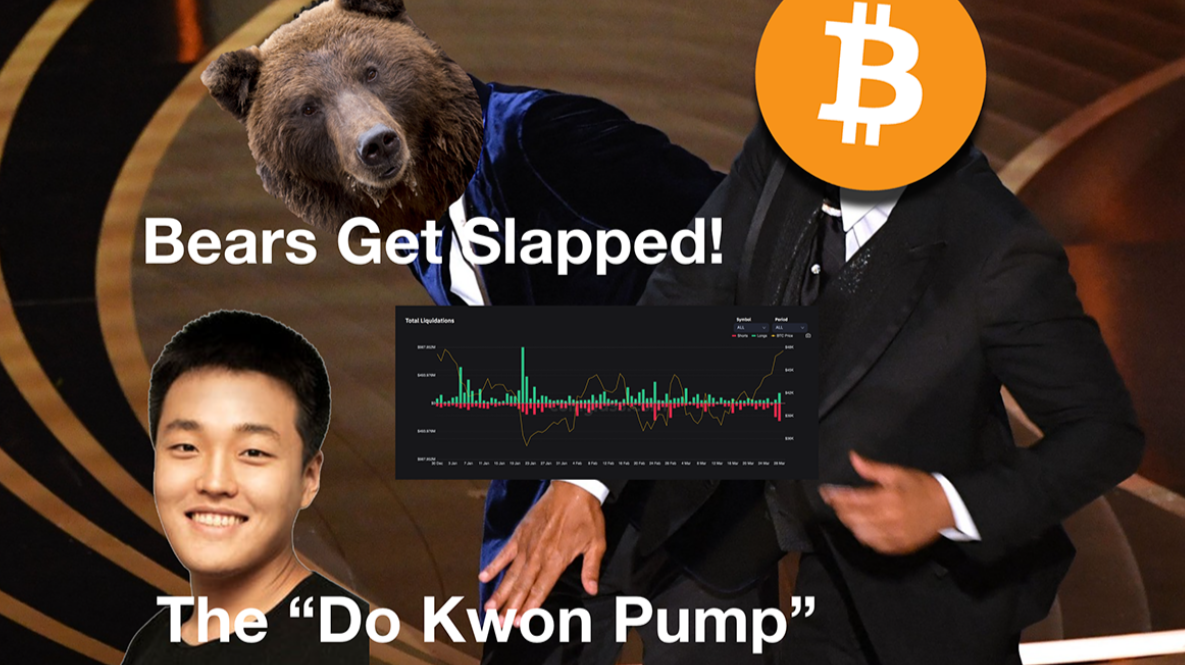 The Bulls Are Running Again And The "Do Kwon Pump"

Bitcoin (BTC) is up about 1.9% for the year (as of March 27), compared with a 4.7% decline for the S&P 500. A fresh rally has seen the price of Bitcoin move from the $38K level to $47K. Bitcoin has passed two levels of resistance leading to a rally, heading toward the end of March (2022). The first resistance level broken was at $42K, and now at $45K (depending on your own technical analysis charts). BTC has passed those levels and holding at $47K (as of March 28). What is signaling the pump? Has the market recovered and flipped bullish again? That seems to be the case.

There is price movement due to the number of shorts that are being liquidated. According to Glassnode's analytics, " ...short sellers, or those who were betting on the sustained drop of Bitcoin’s price, were responsible for carving out a bottom for BTC."  The analysis indicates that this started around February 24, when short liquidations surged as BTC traded at the  $37K mark. Instead of BTC price falling, an increased demand led to more buying that squeezed out the shorts. This is perhaps due to certain factors like the war in Ukraine, the US Federal Reserves increasing interest rates and rising inflation around the world. People are treating BTC and other cryptocurrency as a hedge, though that is more an observation rather than a confirmation.

Charts indicate the shorts are getting liquidated more than long positions (Source: Coinglass)

The next resistance level is at $52K, and should continued buying pressure increase, the asset's price could finally reach the $60K level once again. The uncertainty from increased rate hikes (at 25 bps) was expected to tank the market. Instead we are not seeing that effect, but the rate increases were not as high. What we are seeing is Bitcoin becoming somewhat of a safe haven asset, much like gold or other hard assets. Whether this continues to play out remains to be seen.

More bullish Bitcoin news is coming from the announcement by Terra, regarding the purchase of $10 Billion of BTC (i.e. "Do Kwon Pump"). They will not spend it all at once, but spread out the purchases in a span of a few months or so. Terra co-founder Do Kwon has made the announcement via his Twitter account. Terra is making the purchases to use Bitcoin as an asset to back its stablecoin called UST.  UST is an algorithmic stablecoin that is pegged to the US Dollar, but will now have BTC as a reserve currency.

Overall this has boosted investor confidence. According to the Fear and Greed Index, we are back to 'Greed' at an index value of 56. Just a month ago there was still extreme fear in the market, and the value of the index was at 20. A new level of FOMO is hitting the market. Bitcoin is getting an organic pump from many sources, including donations to the conflict in Ukraine and a surge in exchanges from the Ruble.

At this point Bitcoin is doing what it is supposed to do. Hedge against financial uncertainties, provide an apolitical way to transfer wealth during conflicts and crisis, and you can also add a way to provide an alternative means of financing (as seen from donations pouring into Ukraine). More people are also holding onto Bitcoin, as seen from outflows coming from exchanges and into digital wallets (i.e. illiquid supply of Bitcoin). Bitcoin is showing what it is capable of besides being a speculative currency.

Disclosure: This is not in any way financial advice, but for educational purposes only. DYOR always to verify information.