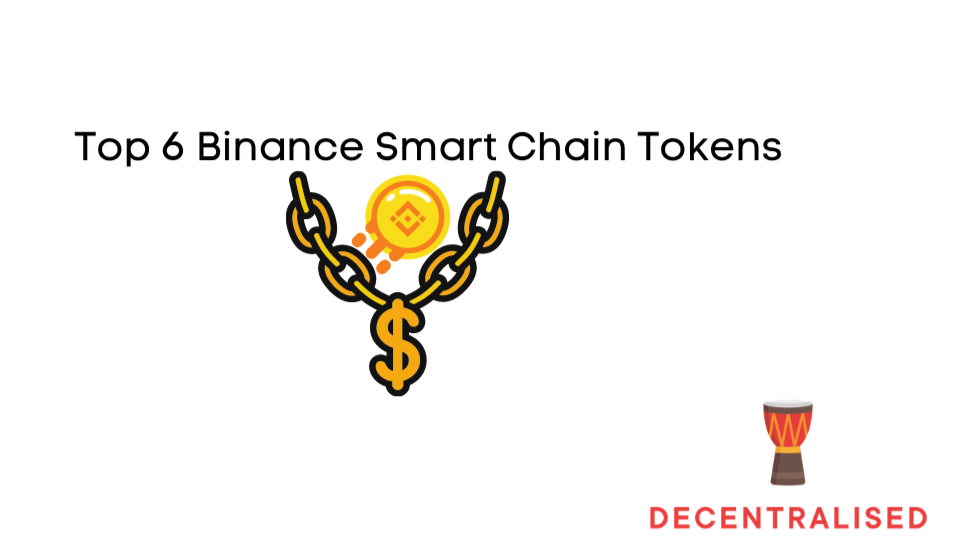 Binance Coin (BNB) is a token that was launched in 2017 through an initial coin offering, less than a fortnight before the Binance digital currency exchange platform went live.

Unlike a Proof of Work (PoW) cryptocurrency such as Bitcoin, you cannot mine BNB tokens since the Binance blockchain utilises the Byzantine Fault Tolerance (BFT) consensus mechanism which means validators earn tokens from validating blocks and securing the network. The BNB token was initially issued as an ERC-20 token running on the Ethereum network.

The total supply at launch was capped at 200 million coins, with 100 million BNBs offered in the ICO. In April 2019, the ERC-20 BNB coins were swapped with BEP2 BNB on a 1:1 ratio. This coincided with the launch of the Binance Chain mainnet. BNB tokens are no longer hosted on Ethereum.

The main use of BNB is as a utility token to pay for fees on the Binance exchange or for participation in token sales on the Binance launchpad. BNB also powers the Binance DEX (decentralized exchange). Binance Chain however was seen as less flexible than other blockchains from a programmability standpoint, hence Binance created Binance Smart Chain (BSC) – a new blockchain with a full-fledged environment for developing high-performance decentralized applications.

BSC was built for cross-chain compatibility with Binance Chain to ensure that users get the best of both worlds. It offers smart contract functionality and compatibility with the Ethereum Virtual Machine (EVM). BSC is not a layer 2 or off-chain solution like Lightning Network on Bitcoin. It is essentially an independent blockchain that can still operate even if Binance Chain went offline.

So where does BNB fit in this new Binance blockchain ecosystem. Well, according to Binance, BSC can achieve ~3 second block times with a Proof-of-Stake consensus algorithm. It uses Proof of Staked Authority (or PoSA), where participants stake BNB to become validators. If they propose a valid block, they’ll receive transaction fees from the transactions included in it. It’s important to note however, that unlike many protocols, there is no block subsidy of freshly-minted BNB, as BNB is not inflationary. Quite the opposite in fact since the supply of BNB tends to decrease over time because team at Binance conducts coin burns.

Binance USD (BUSD) was launched on 5 Sep 2019 as a 1:1 USD-backed stable coin issued by Binance (in partnership with Paxos) and approved and regulated by the New York State Department of Financial Services (NYDFS). BUSD is a digital fiat currency, issued as ERC-20 and supports BEP-2.

Binance and Paxos don’t charge a fee for the purchase or redemption of BUSD, however, bank charges/wire fees may apply.

As a stablecoin, BUSD has several use cases including value transfer, trading on various exchanges, hedging against crypto market volatility, earning interest through DeFi, etc.

PancakeSwap launched by anonymous developers in September 2020 as a decentralized exchange for swapping BEP20 tokens on the Binance Smart Chain. PancakeSwap is an automated market maker which is essentially part of the decentralized finance (DeFi) ecosystem allowing digital assets to be traded in a permissionless and automatic way through the use of liquidity pools rather than a traditional market of buyers and sellers.

These pools consist of users depositing funds into the pool to receive liquidity provider (LP) tokens as rewards for taking risk. In short, automated market makers allow users to exchange tokens, thereby providing liquidity through yield farming and earning fees in return. These tokens can later be used to reclaim a share of the pool or a portion of the trading fees. These LP tokens are known as FLIP. PancakeSwap also allows users to farm additional tokens such as CAKE and SYRUP. On the farm, users can deposit LP tokens and get rewarded with CAKE.

PancakeSwap can be securely stored on supported wallets that are connected to the Binance Smart Chain. These include MetaMask, TrustWallet, TokenPocket and WalletConnect.

An indexing protocol for querying data for networks such as Ethereum and IPFS, The Graph powers many applications in both DeFi and the Web3 ecosystem in general. The Graph currently supports indexing data from Ethereum, IPFS and POA. Over 3,000 subgraphs have been deployed by developers, for DApps including Uniswap, Synthetix, AAVE, Balancer, and many more.

The Graph is working to bring reliable decentralized public infrastructure to the mainstream market. Participants in the Graph Network use Graph Token (GRT) to ensure economic security and integrity of data. GRT is a work token that is locked-up by Indexers, Curators and Delegators in order to provide indexing and curating services to the network. 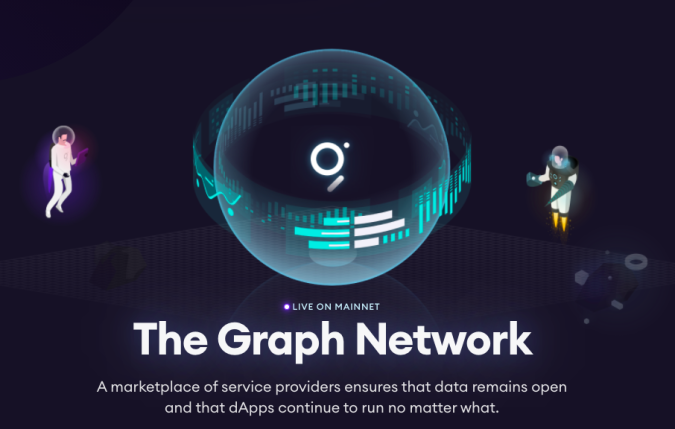 GRT is an ERC-20 token on the Ethereum blockchain, used to allocate resources in the network. Active Indexers, Curators and Delegators can earn income from the network proportional to the amount of work they perform and their GRT stake. Indexers earn indexing rewards (new issuance) and query fees, while Curators earn a portion of query fees for the subgraphs they signal on. Delegators earn a portion of income earned by the Indexer they delegate to.

Earlier this year, it was announced that the Graph has added support for Binance Smart Chain. BSC integration makes it possible for developers to create Application Programming Interfaces (APIs). BSC-based blockchains have joined The Graph’s current support for Ethereum, POA, Polygon, and Fantom. The Graph also has an impressive list of backers.

According to Binance, The Graph will empower developers on BSC to build all kinds of dApps for DeFi, NFTs, gaming, marketplaces, and more. It means that developers are also able to explore building interoperable applications by consuming subgraphs across chains and dive into the subgraph network via Graph Explorer. In a blog post, Binance even mentioned that PancakeSwap, one of the leading DEXs on BSC, had requested the integration of The Graph on BSC.

Launched exclusively on Binance Smart Chain (BSC), Venus is an algorithmic money market and synthetic stablecoin protocol for lenders and borrowers developed by Swipe, whose wallet enables users to have a multi-asset digital application and access to over 50 cryptocurrencies, stable coins and fiat currencies. With Swipe users can buy and sell crypto with a linked debit card, credit card or bank account with ACH, SEPA and Swift wire transfers. 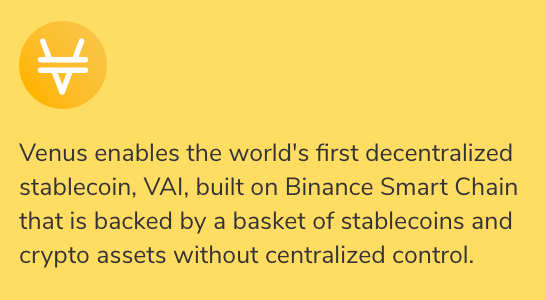 According to the Venus project, funds held within the protocol are able to earn APY on the basis of market demand. Interest is earned by the block and can be used as collateral to borrow assets or to mint stablecoins.

The protocol enables users to directly borrow against collateral in a fast, low-fee way. Venus also allows users to mint VAI stablecoins on-demand within seconds by posting at least 200% collateral to the Venus smart contract. VAI tokens are synthetic BEP-20 token assets that are pegged to the value of one U.S. dollar (USD). XVS tokens on the other hand, although also BEP-20-based, are used for governance of the Venus protocol. They can also be used to vote on adjustments – including adding new collateral types, changing parameters and organizing product improvements. Binance Smart Chain makes it possible for Venus to offer high speed and very low transaction costs.

Venus is said to be a pioneer as far as enabling users to access lending markets for Bitcoin, XRP, Litecoin and other digital currencies and source liquidity in real-time. Customers sourcing liquidity using the Venus Protocol do not have to pass a credit check and can quickly take out a loan by interacting with the Venus decentralized application (DApp). Users aren’t subject to geographic restrictions because there are no centralized authorities in place. Consequently, credit scores aren’t a requirement since a participant is able to source liquidity by posting sufficient collateral.

These loans are provided from a pool contributed by Venus users, who receive a variable APY for their contribution. These loans are secured by the over-collateralized deposits made by borrowers on the platform.

To avoid market manipulation attacks, the Venus Protocol utilizes price feed oracles, including those from Chainlink to provide accurate pricing data that cannot be tampered with. For many the value proposition is that with the Binance Smart Chain, Venus can access the price feeds at a lower cost and with better efficiency, reducing the overall cost footprint of the system.

Ontology dubs itself an exclusive partner of decentralized identity solutions & KYC for the Binance Smart Chain. According to Ontology, their value proposition is that their one-of-a-kind infrastructure will be the bedrock supporting efficient cross-chain collaboration and layer-2 scalability in order to offer businesses the flexibility to custom build blockchains on top of Ontology blockchain for specific use cases or applications.