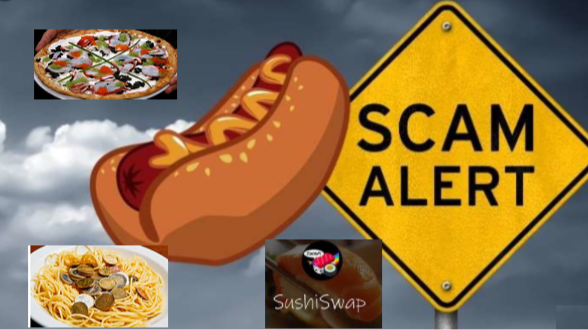 The situation with the markets in the deep red seems to be getting slightly out of hand with "Y family token", scams and very high gas fees.
Obviously, we see absurd stuff like tokens that are born and make exit scams after a few days.
The last two DeFi protocols for pumping and discharging worthless tokens were Hotdog and Pizza (there's also Spaghetti-Pasta). They are essentially clones of other DeFi platforms, some of which are clones themselves.
Hotdog for example is a Uniswap clone, just like SushiSwap, it has promised better APYs and shares governance tokens. Farmers obviously flocked to the platform in hopes of similar earnings from SushiSwap.
Hotdog tokens jumped to $ 6,000 in just a few hours, according to Uniswap.info rankings. It appears that large whales then sold off, bringing the token back to one dollar in just an hour.
Over the course of 5 minutes, Hotdog tokens went from $ 4000 to $ 1.
At the time of writing, Hotdog tokens were trading at $ 0.0002 $ with a definitive collapse. 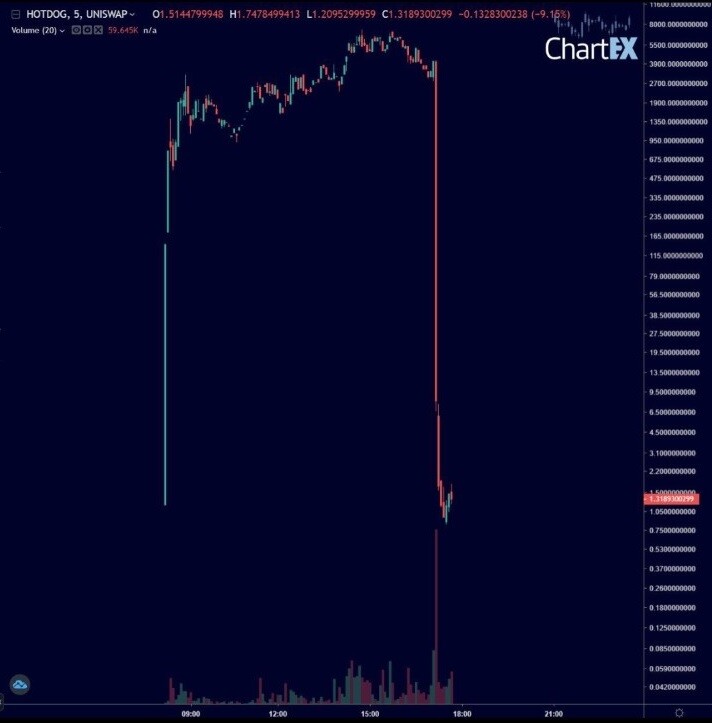 The scam is made possible by the nature of decentralized exchanges that allow anyone to create any token (and clone other existing ones). Once some liquidity is provided with ETH, owners can artificially inflate the price of the token by controlling ETH.
Once the gullible farmers have poured into the platform and deposited cash, the tokens are sold, with prices collapsing.

Another cloned DeFi platform called Pizza Finance also offered six-figure returns for its liquidity providers. The same thing happened with this token: in just two hours, Pizza jumped to $ 370 before falling back to 0.

SushiSwap is a DeFi liquidity provision platform that aims to be an evolution of Uniswap. An analysis of SushiSwap's smart contracts revealed that an admin wallet contains native tokens worth $ 27 million that could be sold at any time without warning. After a series of criticisms for security issues (bugs) got a bit of a boost from a recent Quantstamp security review following questions about its code and time locks on the administrator's wallet.
SUSHI tokens rose to $ 8.65 but it should be noted that smart contracts have yet to be fully verified. Then with the collapse of the markets, Sushi also dropped to just over $ 2. Sushi was also listed on Binance, maybe it's not a scam like Hotdog and Pizza...but I'd stay very far from it. 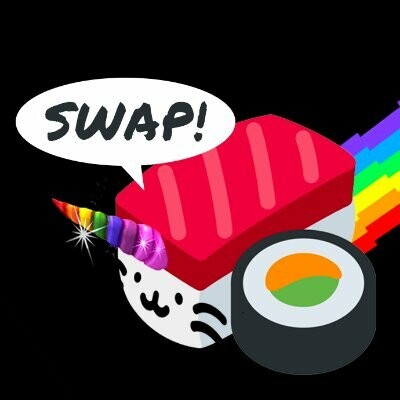 Chef Nomi, anonymous founder of SushiSwap, according to unconfirmed rumors on Reddit seems to have links with Band Protocol.
The well-known oracle immediately held us to deny the news (the curious thing is that the comments have been blocked).