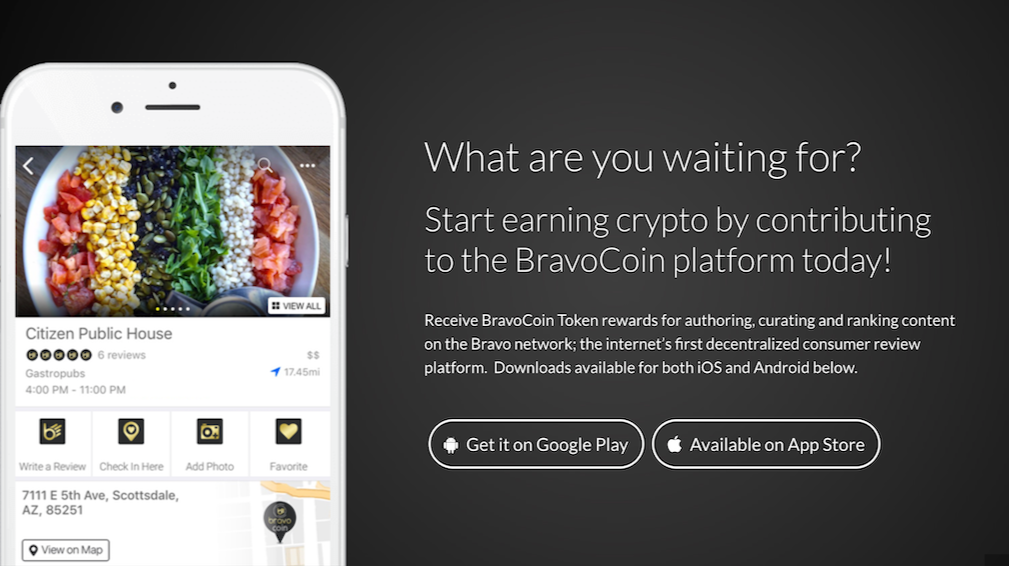 Getting Crypto to Write Reviews - BravoCoin

By providing an immutable, trustless, and decentralized blockchain based review platform, we can completely eliminate centralization and censorship, and vastly improve against bias and manipulation via communal efforts and rewards.

It’s simple to track your transactions via the BravoCoin wallet. All of your BRAVO earnings from authoring reviews, curating and ranking content, as well as other transactions sent or received are readily viewable and rewards are dependent upon the number of likes their reviews receive.

It’s quick and painless to send BravoCoin to another user or future merchants. Simply navigate to your wallet, click the send button, and scan the QR code of the user or merchant you would like to send payment to. The transaction will take less than 3 seconds to confirm and the BravoCoin is immediately available for use in the recipient’s wallet.

They have integrated the use of biometric security including FaceID on latest iPhones, for account login's which makes the UI super intuitive and easy so no need to remember yet another password. Furthermore BravoCoin is built upon graphene technology, capable of handling up to 100,000 transactions per second (tps). This allows BravoCoin to be used not only as a token for rewards via content authoring and curation, but also as a viable payment solution for merchants who choose to accept BravoCoin.

Having used the iOS app (Android also available) the setup and navigation was seamless. The location finder was very fast and showed a variety of restaurants and other reviewable content with great accuracy. Writing a review and adding pictures was also very easy to do and community engagement is also very active. Users can make friends with other users, send messages and like their reviews also. As the user increases activity in the App, with other reviewers they receive voting power % which enables the ability to vote for other content.

BravoCoin cli wallet, blockchain, and backend are open source software released under the MIT license which allows anyone to use, copy, modify, merge, publish, distribute, sublicense, and/or sell copies of the software. All open source software components are maintained and managed through the BravoCoin Foundation. BravoCoin earned is credited to the wallet every 7 days, for up to 60 days per review.

BravoCoin utilizes a delegated proof of stake (DPoS) consensus model. Each BravoCoin account is entitled to vote for "Witnesses". Witnesses are users who function as delegates and are responsible for securing the blockchain and network. Witnesses are compensated in BRAVO for performing these duties.

An exciting innovation from the team at Bravo is their new hardware "Bravo Beacon" (with Proof of Location tech) for any company, festival, retail environment or venue wanting to reward their consumers with tokens. The Beacon connects via BlueTooth, the user receives a "call to action" notification even if they don't have the App, and can redeem the reward in real time, once they have activated their profile in the App. The applications for this physical hardware device are endless, in many consumer facing environments as they are constantly looking for ways to reward brand loyalty.

So get your reviews on with BRAVO today and discover new experiences!

A series of posts about tech companies and startups that are disrupting a multitude of industries from cars to lifestyle, and everything in between, we will cover many different aspects of new and innovative projects that are giving us a glimpse into the future.