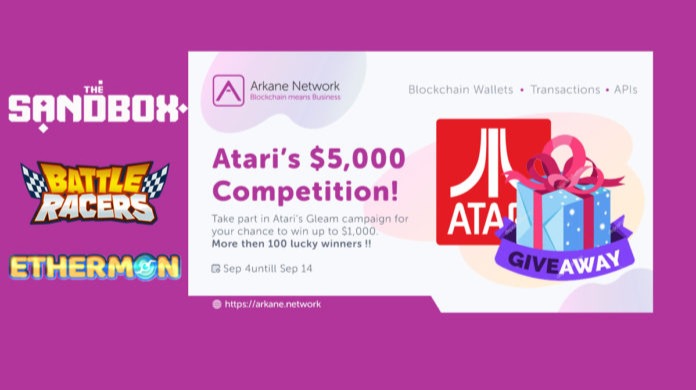 In celebration of the recent partnership and the upcoming Atari token launch, Atari and Arkane Network, along with three well-known games in the blockchain gaming space, are hosting a competition with $5,000 in various tokens and dozens of in-game NFTs to more than 100 lucky winners. The event will last until September 18th!

Participants will claim $5,000 in Atari Tokens and rewards from three popular blockchain games, The Sandbox, Battle Racers, and Etheremon. Additional prizes include SAND Tokens (which recently Launched an IEO on Binance) and in-game NFT’s, Emont Tokens and NFT’s, and Battle Racers golden crates.

The process to join is extremely easy, you are required to do some simple social media tasks and for those who want to do the extra mile, show-off your mons or even create a video for the Sandbox game. Follow the instruction on the gleam platform and get started.

The Atari and Arkane Network Partnership

Arkane network is a multichain blockchain SDK and API provider for Decentralized applications and games that empower the next generation of entertainment. By integrating the Atari Token, Arkane Network will offer support to their project and boost their vision on blockchain gaming.

Atari, the previous month with a press release, announced that the upcoming VC console would be the first to support blockchain games.

“Our partnership with Arkane is another significant step toward broad adoption of blockchain initiatives across interactive entertainment, and specifically our Atari Token cryptocurrency as a secure means to buy, sell, and trade digital assets.”