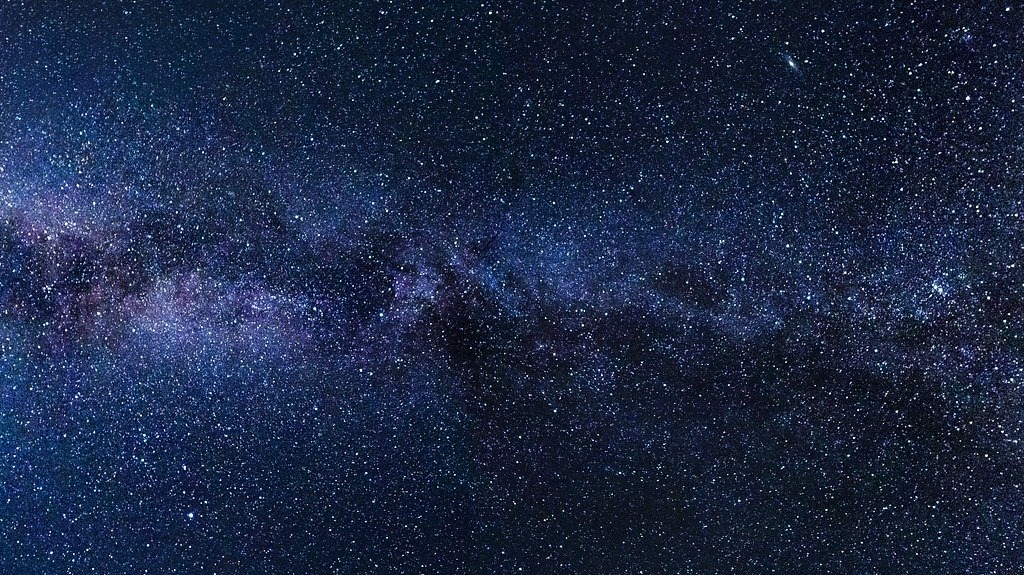 In this post I focus my attention on a relatively new coin: orchid (oxt). After it has been listed in coinbase there have been some discussion and skepticism. I feel that it is missing a systematic and objective analysis and I will try to fill that gap.

In my previous post Blockchain assessment template applied to stellar

This time we focus just on a coin: oxt.  It can be useful to read the first two sections of the article linked above to understand the procedure I will follow, assess the consistency of my analyse and realize how different is to assess a full blockchain implementation than a token issued on a chain as the case of this paper. This doesn’t mean that the assessment of a token is easy.

What we will do is:

Let’s start observing that OXT is an ERC-20 token issued on the ethereum blockchain.

Implication of running in ethereum

The following schema is valid for each ERC-20 token:

Time to know what is offering orchid: the business case. Orchid is a decentralized VPN.

It comes to fill a gap which is clearly stated in the whitepaper whitepaper:

Orchid’s mission is to empower people to understand and control the network activity of their own computers without fear of censorship, surveillance, or intermediation. In service of that mission we are building solutions for a wide audience using open source software to create a decentralized VPN market powered by probabilistic nano-payments over the Ethereum blockchain. Our design emphasizes scalability, decentralization, usability, simplicity and extensibility. Orchid inherits some current limitations from Ethereum in terms of payment anonymity, scalability, and censorship resistance. Additionally our initial focus on affordable high bandwidth, low latency routing currently limits Orchid’s ability to defend against the most sophisticated theoretical traffic analysis attacks. These limitations are not obstacles for most of our main envisioned mass consumer use cases (section 6).

The whitepaper develops also the case of tor project and how it has tried to address the problem of non collaborative nodes in its onion vpn  through an incentive mechanism. Such a mechanism couldn’t be developed in an ideal way as it would have exposed to more potential attacks of malicious nodes.

I suggest to take the time to go through the whitepaper I have linked as very interesting. It explains the mechanism setup to obtain statistically a behavior from nodes which lead to desincentivation of malicious ones.

For this paper the relevant point is that a possible main competitor, tor, presents some limitations when compared with orchid.

In orchid the bandwidth is sold by various nodes to the clients: sellers are rewarded based on usage and the usage is determined probabilistically by a function of the offered bandwidth and oxt staked. This means that the network will tend to expand through many nodes as for sellers having a proxy node with many stakers would not be efficient (not enough bandwidth to support traffic attracted from the staked oxt: such oxt would end up not generating any revenue). The development of a nano-payment system is the key to achieve this rewarding system (I omit the technical details of the transaction handling on ethereum: the development team had to address this via software).

From the website and technical paper we can say the following about oxt:

I am skeptical about not capped coins, and staking systems which are rewarding based on an inflation mechanism favouring high concentration in few nodes and dilution. With Orchid vpn the system is not based on inflation but on paying with orchids depending on the quantity of bandwidth given and amount of orchid staked by  a node. This from a microeconomic perspective is positive

Having a decentralized VPN connected with ethereum we can check the ethereum contract on etherscan to confirm all the informations. 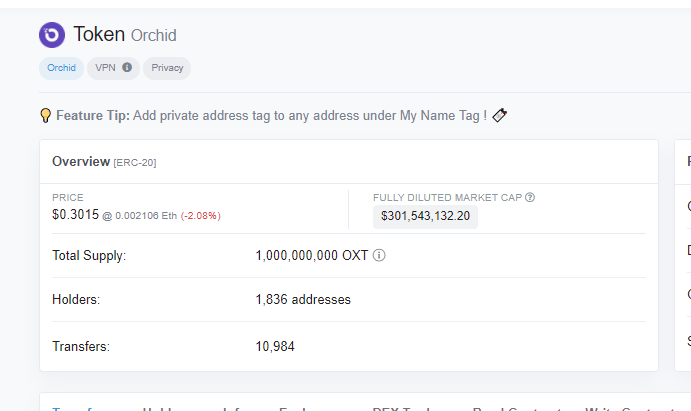 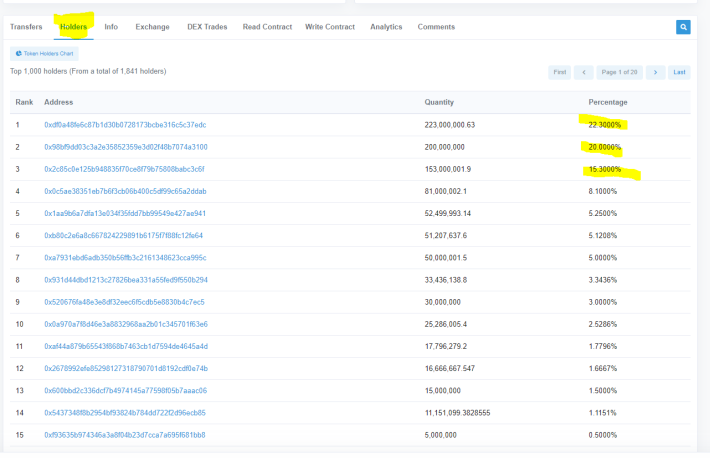 As already said there is no inflation. It is a closed system where clients and servers are holding the token (plus investors and speculators not necessary staking them). The token of the consumers are redistribuited among the server nodes as function of bandwith and staked oxt. This brings naturally to a system with many nodes and a natural circulation of oxt.

The current float can only be estimated: oxt has been traded in few exchanges and in coinbase the daily volume data let us think about a relatively little float of . From coinmarketcap the volume is of around 1mn. After the first period in which was even double it seems to have stabilized probably waiting for news about next steps and roadmap and reactions from the first adopters in the various roles.

Here I just report a discorsive and useful part of the whitepaper:

The Orchid nanopayment system scales to a few million users sending probabilistic transactions once per second on the current Ethereum blockchain (section 5.9), and could potentially scale to billions of transactions per second using sharding with Ethereum 2.0. The node selection process (section 4.3) allows clients to outsource node selection to server nodes in a trustless manner, allowing for lightweight Orchid client implementations.

All components of our design, from nanopayments to node directory and discovery, are decentralized. The Ethereum blockchain is used to enforce a minimal set of contractual settlements required by a functional market. There is no special trusted party with outsize influence or control in Orchid, assuming OXT stake is well distributed.

Usability is key to wide adoption, and the anonymity the system provides per user increases with the size of the user base. Our default client implementation ‘just works’ without requiring unnecessary user decisions for configuration or route management (although detailed configuration options are available for those who want them). The client also helps automate some tedious details such as budgeting and node selection. For most users, using Orchid to protect their network connection is almost as simple as pressing a button. Simplicity The protocol is simple to ease comprehension, implementation, and security analysis. We use seller determined bandwidth prices and client price filters instead of more complex auction mechanisms. The stochastic payment protocol is also comparatively simple: the smart contract consists of around 200 lines of Solidity code.

Our core mechanisms are separable and orthogonal to the extent possible to permit easier future extension and replacement. The nanopayment protocol and smart contract do not directly interact with the other systems. The node directory likewise is isolated and separated from the node metadata registries and other components. Key system design hyperparameters, such as the withdrawal delay, were made contractual parameters where possible for ease of adaptation. The WebRTC based transport protocol is likewise orthogonal and extensible. The nanopayment system, while built for the Orchid bandwidth market, is generic and has potential for broader uses.

Time will tell if the narrative will be supported by facts.

What we know is that the company is extremely well financed as we can see in the article from coindesk:  125-million-orchid-raising-one-2018s-biggest-token-sales

The little airdrop and listing

As often happens in coinbase, before listing a new coin/token the exchange is making little ‘airdrops’ giving the chance to earn some little amounts of the coin by watching tutorial videos.

A suggestion now is to move the few oxt gained to the coinbase-wallet connect an android phone and test the app. In case of an iphone the application is still requiring some additional steps as it is provided in beta mode.

In this phase the actors: company, vpn client, servers (few selected providers) are making the workflow frictionless polishing the end solution in accordance to what seen in the section above.

The company is present on reddit and telegram, the last quite intensively to address user questions. They don’t look interested in address currency investors but more tester of the application.

The code is open sourced on github code. What we can deduct: 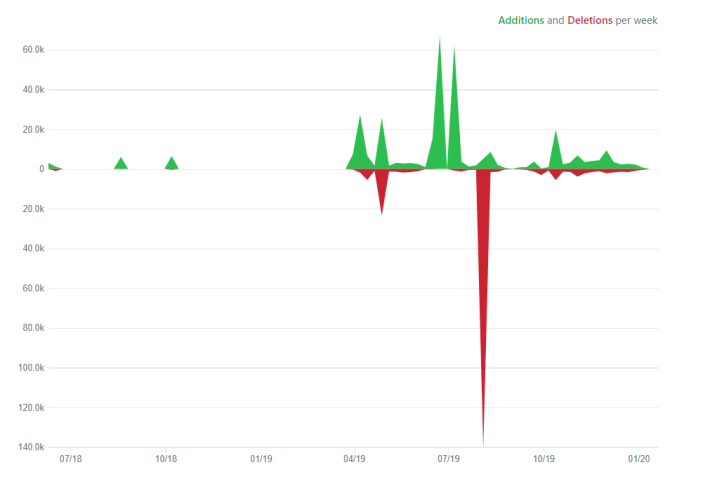 First of all let’s take a look to the picture below on the size of VPN market from Statista: 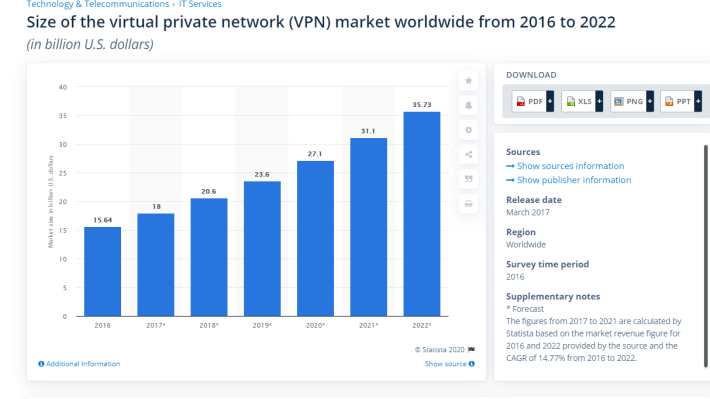 Orchid addresses many problems of the VPNs and seems superior to a possible competitor like tor. Solutions like protonVPN (provider also on protonMail) are competitive and expensive though not decentralized and, for sure different: all in all they could address different niches or areas of a big market. The market is anyway huge if having just a .5% of it by 2022 would mean revenues around 200mn per year. We can then try to calculate with numbers like those what could be the capitalization of the float.

Imagine that clients pay 200mn per year: stakers will incur in management costs and ethereum gas cost has also to be deducted. Let’s approximate to 10 mn the value which could be divided per earnings. Staking 200mn would mean a 5% per year. Obviously if the ideal system would give 20mn earnings to divide the same revenue could come staking 400mnUSD.

Let’s stay conservative and keep the 200mn payed per year and 200 mn staked.

It could happen, and should happen to me, that clients don’t need a wallet with OXT, but can pay by cards and the transformation happen behind the scene, but let’s assume that users have their own wallets. Every person will tend to buy oxt when they will appear apparently cheap mapping the price of the connection to the cost in USD (which we take here as the reference for easiness). I think that a natural behavior of a OrchidVPN user would be to keep a certain amount of OXT, let’s say 3 months. This means that the 200mn client side become 50mn in computation of the float in USD. We are not considering people buying the OXT just for speculating on growth.

At the moment the float could have a market cap of 250mn with an ultraconservative approach. Let’s consider a reasonable float in 2022 of 200-250mn OXT and the price would already be of 1USD with a clear expansion model in front of the company. The readers can play with scenarios and figure out other possible fair values for oxt.

We have presented orchid VPN business case, described it in the ethereum ecosystem trying to assess the credibility of the company narrative. We have then discussed the enormous growth of the VPN business and presented a very conservative case in which, assuming that orchid VPN will be able to deliver a good client product and will have acceptance, the coin can very easily stay around 1 USD. I think that, at the contrary of the initial skepticism oxt can be a good investment but I invite the reader interested to invest to test the mobile app with the airdrop before risking his own money.

Suggestion for the readers

A nice how to by an android users which shows us the application on his device. Should not be beta there, therefore the usability test could interest the community and add value. 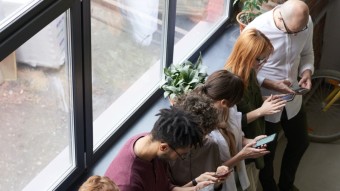