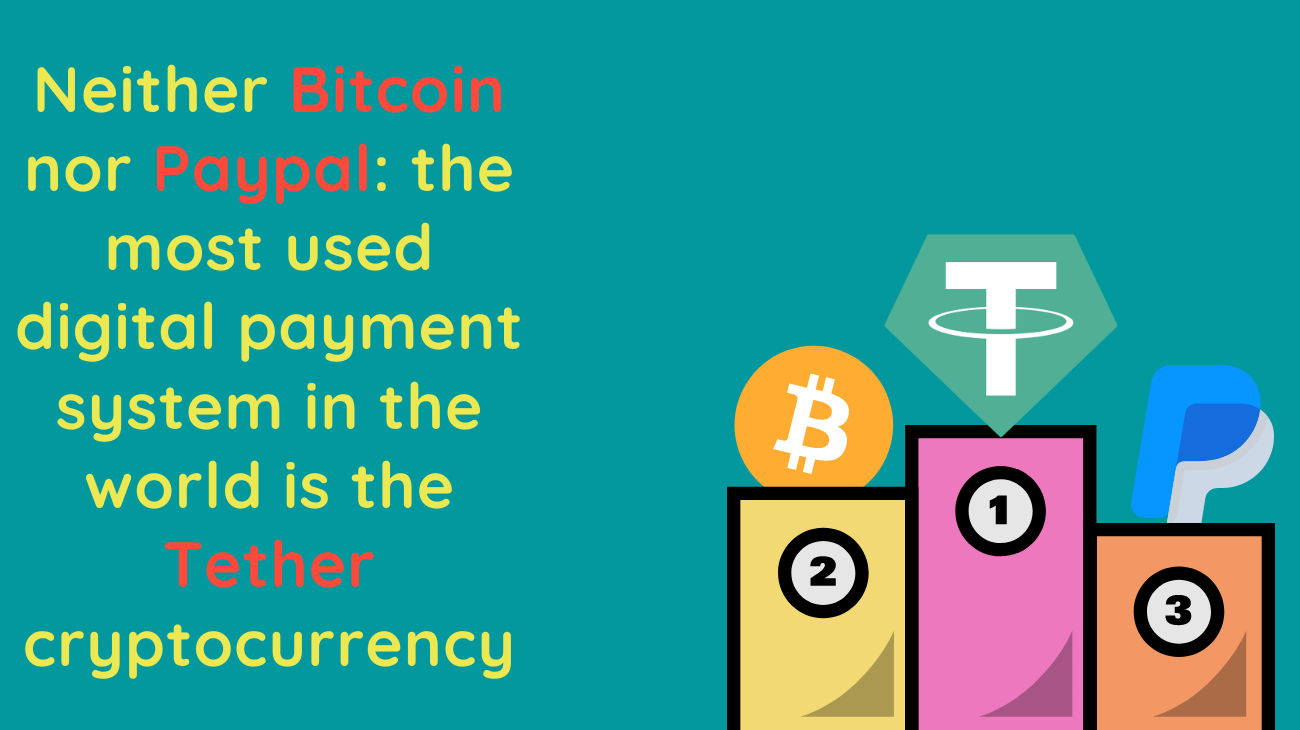 What is the most used digital payment method? (Spoiler: Neither BTC nor PayPal)

If you are passionate about cryptocurrencies, you have surely heard the name Tether by now. A few days ago the daily value of the exchanges of this cryptocurrency born in 2014, from the intuition of the Italian Giancarlo Devasini, would have overtaken Bitcoin and PayPal, thus becoming the most used digital payment system in the world.

The record is confirmed by a report by the company Coinmetrics, according to which on 20 August the weighted average 7-day trading on Tether would have reached 3.55 billion dollars, about 20% more than Bitcoin (which is around 2.94 billion). On the same day on Twitter, economist John Paul Koning pointed out that PayPal, in its report for the second quarter of 2020, had declared an average value of daily transfers of 2.94 billion, also therefore lower than the value of Tether exchanges.

In a tweet, the company behind Tether attributed its growth to the current economic situation, which would push users to abandon traditional payment methods:

"In uncertain times, the ease of use, security and availability of digital currencies stand out. People are looking for alternatives to antiquated banking and payment systems ”.

But is it really so? And, above all, how is it possible that you haven't heard of it?

To answer these questions we need to take a step back. Tether is a stablecoin, that is a cryptocurrency whose value remains anchored to the dollar, effectively proposing a sort of alternative to "cash". If the Bitcoin is subject to market fluctuations, the Tether instead keeps its value unchanged.

This feature means that it is widely used in markets where cryptocurrencies are exchanged, especially in Asia. Investors and traders, instead of changing their assets into dollars, euros, yuan, which they should deposit in the bank, transform them into Tethers, which they can keep in their virtual wallets, and then change them back into cryptocurrencies at the appropriate time.

The most seasoned investors use it to switch from one cryptocurrency to another in times of high tension, without having to convert into official currencies. Or to freeze profits in times of high volatility or to transfer funds from one platform to another, which often do not deal with the same cryptocurrencies. But even the platforms themselves use it as stability anchors. Some use it instead of the dollar for customer accounts, but also to trade cryptocurrencies with other platforms without having to hold dollar accounts. In the end, it therefore established itself as a "pass-through currency" accepted unconditionally in the cryptoworld.

So we are talking about a payment system, used above all in cryptomarkets.

From China with fury

According to a report published a few days by the blockchain analysis company Chainalysis, this efficiency of Tether would also facilitate the transfer of capital abroad, even if not necessarily of illicit origin: apparently, in China, it is almost customary to convert mined cryptocurrencies into Tether.

Who is behind Tether

A few months after its birth, it was discovered that Tether was the product of a cryptocurrency exchange, Bitfinex, whose CFO is the Italian Giancarlo Devasini.

Considered to be the largest bitcoin trading platform in the world, Bitfinex has a decidedly offshore corporate structure ranging from the Virgin Islands to Hong Kong.

Financial information site Bloomberg has called the way Tether is managed and governed "a black box". “While Bitcoin does not belong to anyone - reads an article published last October - Tether is issued by a private company based in Hong Kong whose owners also own the Bitfinex crypto exchange.

The exact mechanism by which Tether's supply is increased and decreased is unclear. The exact amount of the offer is also covered by legal reservations is in question, as Tether is not independently verified. In April, Tether revealed that 74% of the Tethers are backed by cash and short-term securities, whereas previously it had claimed to have 100% reserve.

But that is not all. In April 2019, the New York Attorney General accused Bitfinex of having used Tether funds to cover losses of 850 million dollars: if the sentence (expected in a few months) confirmed it, Tether would lose its raison d'etre, as stablecoins to be reliable must have reserves of the same value as their capitalization in fiat currency, in order to guarantee investors. While according to a study by two researchers from the University of Austin, Texas, stablecoin in the past was used to manipulate the price of other cryptocurrencies such as bitcoin and significantly increase their volatility. But even then it's "might".

To date, the controversies do not seem to have stopped Tether's race, which underneath aspires to become the digital currency of the world. To say it is always Bloomberg who wrote in April:

“With most of the asset classes damaged during the coronavirus pandemic, one cryptocurrency has emerged as the winner in that sector: the token known as Tether. While Bitcoin's market capitalization has fallen 37% since mid-February, Tether has increased 38%, or nearly $ 2 billion ...

For years, the best-known version of Tether has been promoted as pegged to the US dollar and as a conduit for transactions with little price volatility. That money-like equivalence of the so-called stablecoin became even more evident for cryptocurrency investors when the value of most other digital currencies plummeted. "

And who knows that in the next few years this cryptocurrency that has made stability its strong point will not try to establish itself as a digital payment method even in sectors that until now have been allergic to it.

It would not be so absurd: stablecoins are increasingly popular in countries where the economy is in danger; in Venezuela for example, where the Bolivar, the national currency, is subject to double-digit devaluation, there are those who choose to change their savings into cryptocurrencies, such as Bitcoin and Tether, to use them at the right time without their capital devalue, because the government effectively prevents them from buying dollars. So the race continues. Unless some external factor intervenes: other stablecoins.

What do you think of it? Are you surprised to know that Tether surpasses Paypal and Bitcoin as the most used digital payment system or not?

Let me know yours in the comments, and as always thank you for making it this far! Until next time