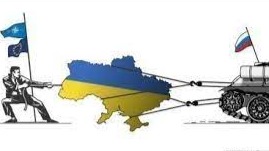 Edit: Testing the audience, I'm relieved to see my previous troll bait headline didn't work. Thinking it might draw eyes, it actually diverted them. That is a serious sign of hope among our ranks within Cryptonation. I'm used to the algorithmatized hashtag functions and being swarmed with legions of ironic trolls on other platforms. That said, maybe there's a chance for some eyes to see the real message of this post instead of the provocative substance of the previous headline. Thank you, the few of you that did read and upvote and tip before. Maybe there's still a chance for troll legions yet.

Having crypto as a lens can sometimes offer insights angles of approach to traditional problems. That will be a wave of the future as the technology and its implications find applications. Anonymous helped inspire this thought, as they declared a decentralized cyber war on Russia.

A problem with Nato right now is it's a hulking and somewhat obsolete framework overgrown from the 20th century when it was arguably once necessary and imperative. Not to say that it is of no use, but in this particular moment, its formalities and bureaucratic nature have rendered it ineffective for one of its hypothetical missions, that being maintaining international stability and peace (in theory...). I understand it is an alliance of a defensive nature, but it's pretty easy to question whether its Cold War origins are somewhat out of context now that we are in the post Cold War era.

Nato, and consequently Europe, the US, and other countries (the West, if you must invoke that neo-classical and romanticist mythic falsehood), have to some degree been paralyzed into inaction. The formalities of declaring war are the very things that endanger us. A military alliance that can't declare war, hmm (what are we paying for exactly?) Granted, one of the intents of the organization, in theory, is to help prevent WW1 type scenarios of unitended and run away escalations. It's understandable that nuclear warheads, as nato, serve as deterrents and serve most of their function by not being used. But that's a conundrum for addressing dictators, wars outside of the alliance, and interventions that could very well be justified.

Putin arguably began all this in 2014 with unmarked "little green men" that mobilized into Crimea and claimed they were "local military enthusiasts." It seemed so odd and almost plausible at the time for some. But their identity distracted from their purpose, lots of misdirections. You can't play games by the rules if your opponent doesn't play by them, they are playing a different game. Putin today is playing chicken with Nato and could potentially escalate and intimidate Nato and Europe into division and into concession treaties, that could take the form of solidifying Nato, dissolving it, or removing missiles and defenses from places like Germany or Turkey. Some paraphrasing from Fiona Hill in an interview yesterday, as of time of posting this.

You have to ask yourself in this moment: what happens if Putin stares down Nato and sends off a nuke or multiple nukes somewhere, anywhere, even as a gesture? Do you really think we're going to respond in kind like the Cold War doctrines might have dictated? Or what about a similar scenario with a secondary conventional invasion into a nearby Nato country like Poland, or in the Baltics? Will we only send thoughts, prayers, money, equipment, and forces to watch the borders and the next onslaught as we are rendered unable to truly respond for fear of even worse escalations and retaliations?

What if the West had its own little green men? A voluntary force almost like the old days of pre-modern wars with mercinaries? We could have our battalions break ranks with permission to leave, drop them off at the borders, and then send them in with taxis and Ubers, budget style, or with Toyota's, like Jihadis. And when they get there they'd have ample Western material support and could then help things on the ground. A decentralized military without the formal boundaries and anathema of officially declaring war (Putin btw, technically has not, sigh). The point in bringing this up is that it's clear that in our multi-bajillion dollar security apparatus and strategy, something like this is apparently no where in sight, at least not anymore. Most of the Cold-Warriors are retired, but they did things like send in the CIA into Afghanistan with stingers to shoot down Soviet helicopters (which later turned into Al-Queda, but that's another story).

Was "the West" really so blind as to see Putin's build up for a year, and especially these last months, and literally not respond in anyway other than to raise alarm? That in itself is alarming. Or is this part of the plan, of never having had the intention or will of actually doing something substantial to help Ukraine, or more importantly, black-eye Putin? Meanwhile Europe is dallying on one of the most important parts of the sanctions packages, the Swift international payment system, which, one of the things it's used for is for buying gas from Russia. We can't even put our money where our mouths are? I get that it's cold and gas prices are stupid and going to get stupider, but should our resolve be stupid and stupider?

How many active military units or civilians with training would be willing to go shoot at Russian military in Ukraine right now if given the opportunity? No formal war declarations required. And we could do like Putin and deny. Oh, there's Americans, and French, and Germans there? Weird, no idea Putin, is your head okay? You don't sound okay? Is this one of your funhouse lies again? How can we recall forces we didn't deploy? Oh, you're taking casualties and having a hard time cracking the Ukrainian nut? Well you should've thought about that a little longer, considering you've apparently been thinking about all this since at least 2008.

Anyway, just a satoshi for the wishing well. Maybe we'll figure things out, or maybe this is a big historical shift and "The West" really is decadent and weak like Putin's been saying. To be honest though, nothing he says is true, not in the way he means it at least. You shouldn't have to prove you're strong by taking a nuke to the face, you end up dead and worse off than weak. That said, there are allegedly 17k volunteers from as many as 26 nations, including Western ones, like Americans, French, Germans. Wouldn't it be neat if we could've had a contingency for that and enabled more volunteers to go months ago? Bolstered that to 170k and given Putin a run for his money?

Maybe decentralization is the future. Maybe war is the future. Maybe peace is the future. I guess we'll just have to find out. Stand up for what's right. No, for real, not just what seems right, you have to stand for what's really right. It's a lot harder than packing up a tailgate party to your nation's capital. You stand for it by sitting down and listening. Not this milquetoast fear of vaccination, fear of government. We're over here in the West afraid of paperwork; afraid of being asked nicely to put our masks on; afraid of regarding our fellow citizens of different colors and origins of other nations as equals; afraid to get another job or do what we have to to survive, or to have a sense of duty. There's a difference between freedom and liberty and we've forgotten that to our peril. Freedom is no consequences, liberty is responsible, for one thing. The difference between normality and an emergency.

The greatest threat democracy faces is actually from within, from cynicism; things that happen within each of us if we are not careful, like loss of hope, loss of our own self respect, loss of our hearts, minds, souls, loss of our way, our true civil higher calling as people of liberty, of equality, of the rule of law. Lights that have guided Americans and other nations for decades and centuries have been dimming lately. These are the lights in our eyes, the lights in our hearts, the enlightenments in our minds, the lights of the world. Its fate is within each of us. We've been retreating into cowardly anarchism for decades. In being too afraid to control the necessary markets, the uncontrolled markets turned around and controlled us.

So many other things could be said. But I just want to say that we have to have hope. Hope is brightest when things are at their darkest, just like how bitcoin is the best buying opportunity when its the lowest. And we have to resist these natural tendencies towards tyranny within ourselves, don't worry about the authoritarian leaning person out in the street so much, or confusing their anger and pain for it, what does your anger and pain mean to you? What are you going to do about it, with it? Are you going to be constructive about it, or destructive? Positive or negative? Are you going to internalize the hopelessness into nihilist words and action in the world, or are you going to believe in the truth within yourself you're too afraid too admit? We are democracy. If we give that up, boy howdy. We give up a lot. Sure, there's other ways of doing things, but if history has anything to say about it, "democracy is the worst form of government, except for all the others."

We've got a long road ahead of us. We've got a long way down, but the ground is right there, we can see it, we know what it is, someday we'll all pretty much be buried in it or become part of it again. But think of how much higher we could go, to the moon and beyond, ascending into the heavens. Choice is yours, real patriotism, or internalizing the lies that are everywhere and turning yourself and your heart to stone. There is no perfect nation or policy or human being, or silver bullets. It's fine to talk about different things, but different things shouldn't be brought in to muddy discussions about what's happening in Ukraine, or distract from them. No one's perfect, but it doesn't mean that we can't still stand up for what's right at any given moment just because we failed to last time we had the chance. Don't believe a word Putin says. Lies are cheap, truth is expensive. Not caring is easy and lazy, being a better person, that's hard, and democracy takes effort.