While October 31, 2008 was hailed as a pivotal moment in monetary history, at that time, very few people paid attention to the launch of Bitcoin whitepaper. And like all other revolutions, this revolution will take some time to develop

It is difficult to determine when Bitcoin has turned from an idea to a movement. Was that when Satoshi Nakamoto tapped the genesis block on January 3, 2009? Or when he sent his first transaction to Hal Finney a few days later? Or did it happen throughout the year that people couldn't notice, when the conversation moved from the mailing list, where it started, to Sourceforge, where the first Bitcoin forum was founded?

That is one of the theories that people are contemplating. The only thing that should not be discussed is that on November 22, 2009, when Satoshi welcomed members of the new Bitcoin forum, held at bitcointalk.org, his idea was "rooted" and already a small group of believers contribute to "nurturing" that idea. "Hello Satoshi, all forum members and Bitcoin! Users," from Satoshi's first post comment on Bitcointalk. “Thank you for developing Bitcoin. A long-awaited anonymous cryptocurrency / cryptocurrency P2P. I am very impressed and this project has great potential. ”

Things could have gone differently

When writing about history, it's easy to assign the "inevitable" to events; It's easy to assume that everything has happened in a certain way, because that's how they are intended to happen. The truth is that Bitcoin, like all seismic movements, was not expected to happen that way. If not for the tenacity of those who accepted from the very beginning, those who kept the spiritual son Satoshi alive in his weakest moments, along with the randomness and fortification of geopolitical events, Bitcoin will not be able to revive as it is today. Its existence and strength today can be attributed to the power of the Satoshi idea, along with the efforts of hobbyists who work through the night to correct serious errors, and "nurture" them. Bitcoin until the fledgling network is strong enough to survive. 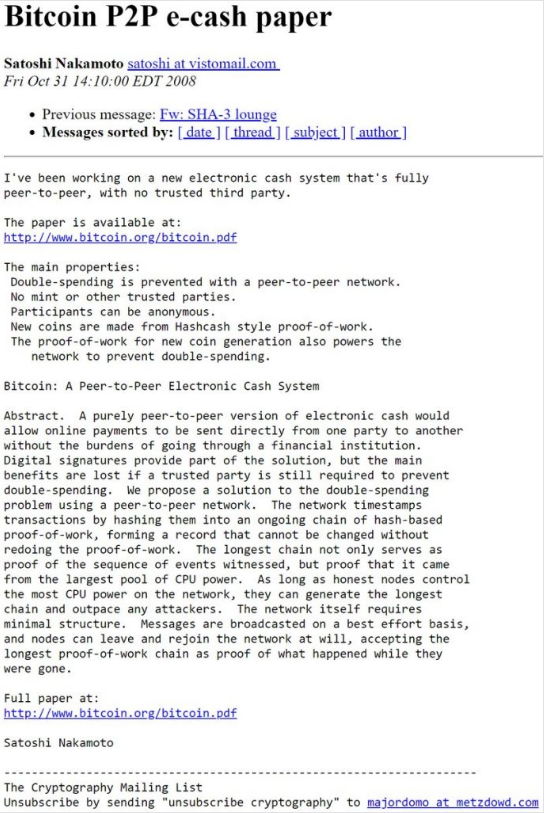 In the Bitcoin History series, I will bring you a series of articles, focusing on the events of the beginning of Bitcoin's journey and history from the very first days, on the forum where Satoshi started. Although Bitcointalk is not the only store of ideas, it has formed a hub, in the days before Medium and the early stages of Twitter, where key contributors were convened to share ideas. thought. There was a lot of controversy at the time, and so is it today, but there is less "tribalism" and "virtue signal." With no land to fight, the first task for Bitcoin's first users was to build a world in which the ideas contained in the whitepaper could be realized.

"A problem that comes up right away for any new currency, that's how it is priced," Hal Finney said on January 11, 2009. "Even ignoring the fact that Initially, almost nobody accepted it, but there was still a difficulty in making a reasonable argument to support a value other than zero for the coins. ”He concluded:

“As an interesting test, imagine that Bitcoin succeeds and becomes the dominant payment system used worldwide. The ability to create coins today with a few cents of calculation time can be a pretty good bet, with a payout of 100 million to 1! Even if Bitcoin's success rate at this level is low, are they really 100 million to combat? Worth considering… ”