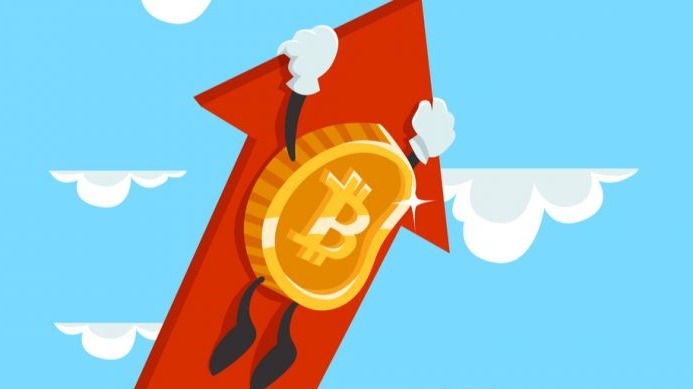 This article aims to make a long and detailed analysis of bitcoin, going through several relevant points that give us a macro view of the asset. I will return to some points mentioned or explained in previous publications to exemplify and bring more content not covered there. 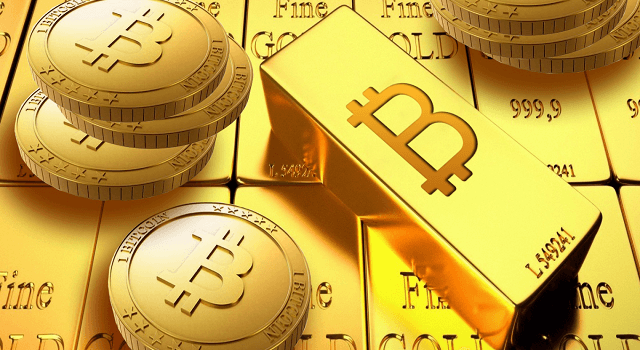 I think Gold and Bitcoin are really a little complementary - that one person's strengths are the other's weaknesses and vice versa. This suggests that gold and Bitcoin together may play some role in our future. It is common to see Bitcoin even visually represented as a kind of "golden coin". Gold forces include its history of serving as a stable store of value, and the popular use of bitcoin has been for long-distance transactions, such as remittances of migrant workers back to their families at home in other countries using existing systems. Traditional bankers see very long, expensive and time consuming transactions.

A major problem with using bitcoin as a fiat currency is price instability (unlike gold), although it can easily be divided into extremely low values ​​and used in small transactions the risk reward would not be easily taken into account by merchants. Therefore, we cannot effectively use it as a basis for price or for long term contracts.

Another big reason bitcoin is compared to gold is the graph. They have numerous similarities but there is the difference that bitcoin has the instability and speed that gold does not have. Here we see the comparison and we already played the idea that makes countless bitcoin enthusiasts excited.

An Exchange-Traded Fund or ETF is a fund that is traded in a stock market. They act as mutual funds that allow everyone access to an index or commodity while giving investors the same profit. This would bring greater security for the general public to invest in bitcoin, bringing a reliability that is not seen so far and, consequently, increasing bitcoin adhesion would have a price boom, as with gold in March 2003

Unfortunately the bitcoin ETF was recently denied, but we must consider it a victory that it came into the picture since years ago the name "bitcoin" was always taken for granted, taken as a joke. 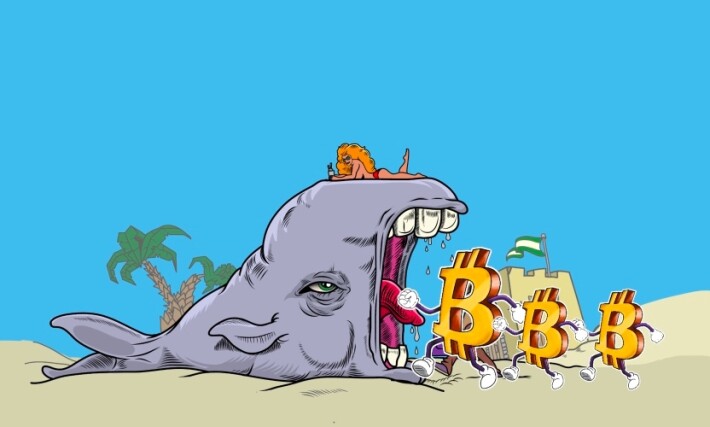 The term "whales" is used this way because whales are the largest creatures in the ocean and can dominate smaller fish with their large size. Bitcoin whales are viewed in a similar way because their extensive holdings can affect decisions by smaller traders with just a few successful trading methods. In addition, the smaller the market and the lower the liquidity, the whales can devastate altcoin markets much easier than bitcoin. 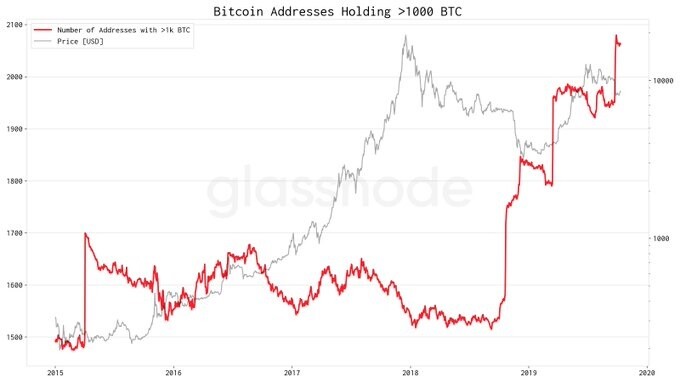 Here we have the ratio of bitcoin wallet addresses with more than 1000 bitcoin to the price of the asset, note that whenever the price drops the number of wallets triggers in a parabolic manner, this is a form of manipulation. Right now we have exactly this parabolic increase, giving us the view that the price will continue to rise as whales continue to fill their pockets with bitcoin.

The manipulation is linked to whales (investors with portfolios with more than 1,000 bitcoin) and futures contracts, especially those on the CME stock exchange. In short, futures contracts are a way of speculating the price of bitcoin in a given time (say 2 weeks) and from that, if a whale has a futures contract saying that the price will be lower than when it bought Before the maturity of the futures contracts she can sell part of her capital (say 500 bitcoins) to a large broker, from which a herd effect will occur with all bots and traders activating sell orders that will bring down the price to that on the day of the futures contract this whale gets beyond the contract profits to buy back bitcoins at a cheaper price. The only people who lose out in this situation are unsuspecting traders or new to the market.

As an example, we have the following: 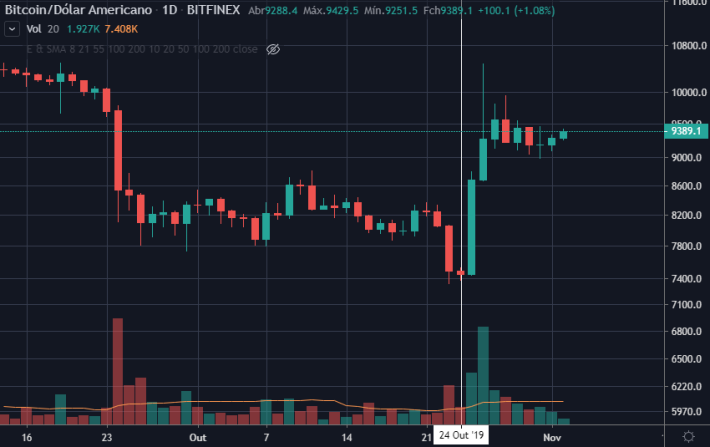 This white line divides a 7% drop from a 24% boom (if we consider the shadow we have 40%), the white line also divides the maturity of CME futures contracts and shortly before that it could be observed in several brokerage houses sell orders absurdly high bitcoins. This can clearly be explained by the following technical analysis: 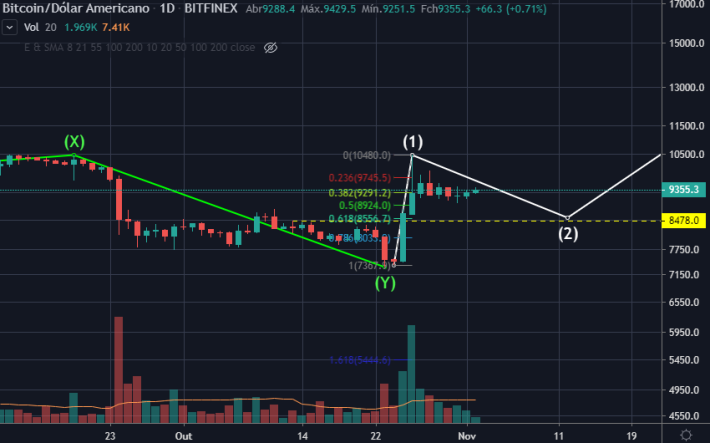 All this correction until just before the crash was a WXY and now we finally get into wave 3 valuation, the bull run around, which everyone was talking about. From this point on, considering that this parabolic movement was a wave 1 we will then have a downwardly trending price until it reaches the expected retracement level of 0.618 which coincides with the value of $ 8556. 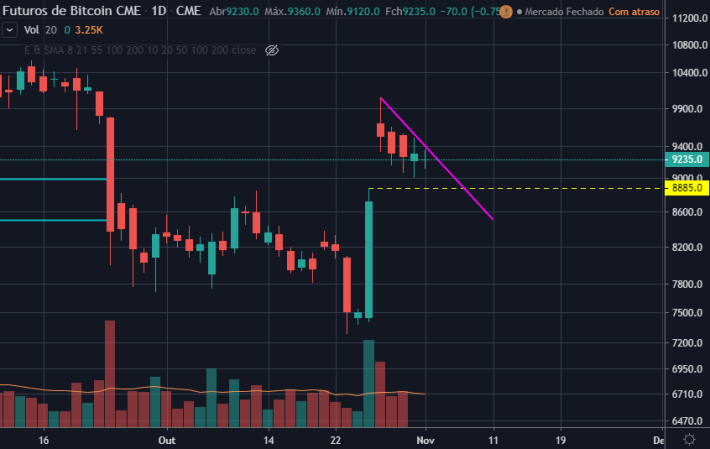 In the CME futures chart we have another confirmation of this price retracement, a $ 8885 GAP has been formed which is serving as a magnet for the bitcoin price, so it is very likely that the price will come down over the next few days or weeks so that have the strength to return to rise. 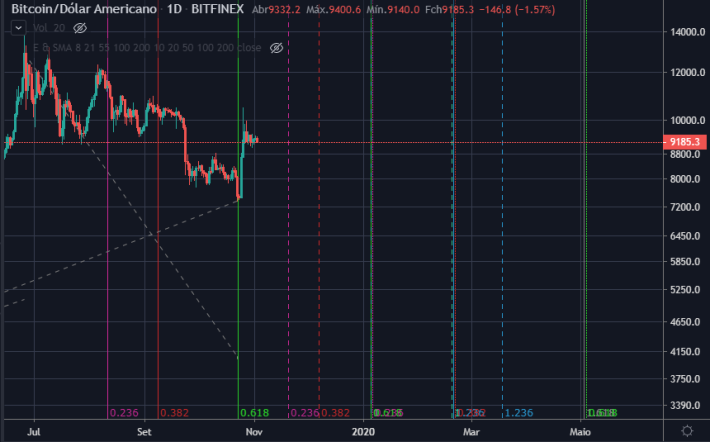 In this chart I apply the most important time pivots, if you do not understand what a time pivot is here is a brief explanation: the graphs usually have two axes (x and y) the x axis is the time axis and the y is the price axis. Generally when you learn technical analysis you only see the price y axis and disregard the x axis of time, as the graph is a composition of the two both have fundamental importance in reading. Well, the time pivots are there to show us where the price is most likely to react differently from what it was doing so far (this may be a temporary trend reversal or not) and when you put two different pivots on and off. they mark the same days or near days or days you have a confluence of time pivots giving you a certain assurance that the price will react on that date. As an example of this we have point 0.618 there which gave us exactly the point where the price formed a bottom and then a pullback. There are few works talking about time pivots at the moment, I have a specific reading technique that I'm developing.

Applying the most important time pivots so far, we have a lot of confluence between January 5th and 6th, February 19th and 21st, and May 5-7th. 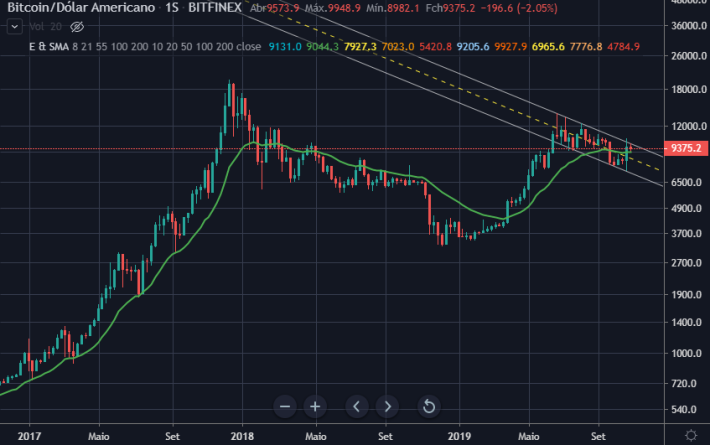 In the weekly chart we have the continuation of the bearish channel with the attempted failure of breaking one of the candles. Moreover again the price being sustained by the 21 period exponential moving average which represents a very important indicator of uptrend, as can be seen in the last bull run the price never closed below that moving average for more than a week and going back above it shows that now the force is again with the bulls. 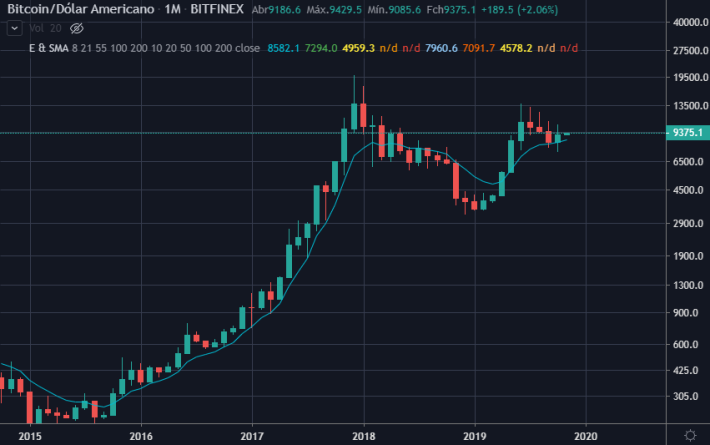 In the monthly chart we have another strong bullish indicator which is the exponential moving average of 8 periods which in bull run periods tends to support the price as can be seen in this chart and it is very important to note that in this correction seen previously we did not have the price closing below her. It is also important to note that the longer we read the chart, the less noise and interference we have, so this is a very strong signal that the uptrend continues. 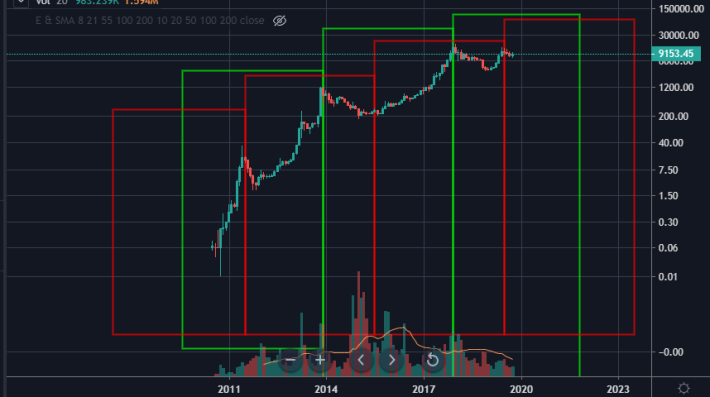 The first (and perhaps most important) thing you need to know about bitcoin is that it moves based on cycles, bearish cycles, and bullish cycles. In green we have the four year cycle of bitcoin note that the four years mark exactly the tops or beginning of the fall and in red we first have the genesis block to a top and right after that a bottom (there was an inversion) and now we fall exactly into the middle of the climb. 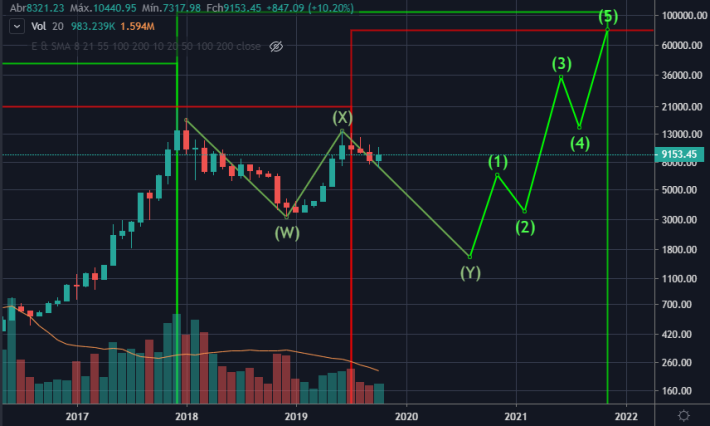 Many people still think this may be part of the corrective process that has been going on since the beginning of 2018, but if you look closely, the time that bitcoin would have to follow the pre-established pattern if this were a continuation of the correction would be too little. It's been 6 years since the monthly chart has been bitcoin-free, and that's exactly what it should do to continue with the four-year pattern. So it makes no sense to continue with this long-term bearish view. In addition, there is no indication that bitcoin has such long corrections. 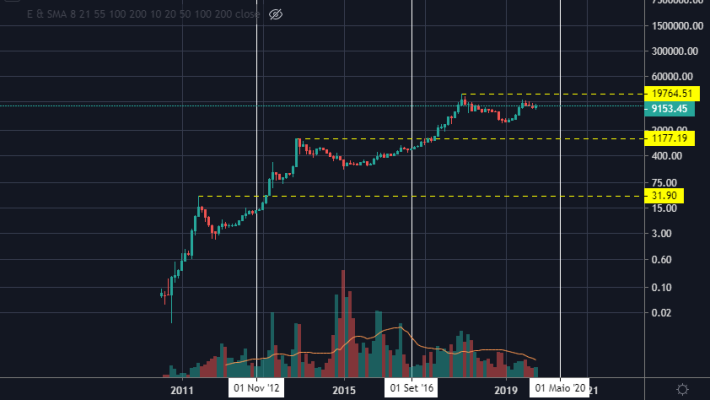 Historically speaking, bitcoin has never been able to exceed its highs before halving. This can be explained by taking as an example a traditional economy, the central bank is constantly pumping money into the economy which generates inflation; with this the value of the currency is devalued and with bitcoin the opposite. Whenever halving happens, fewer coins are generated and consequently the demand becomes higher. and from this there is valorization, which gives the necessary impetus for bitcoin to generate a new historical maxim. 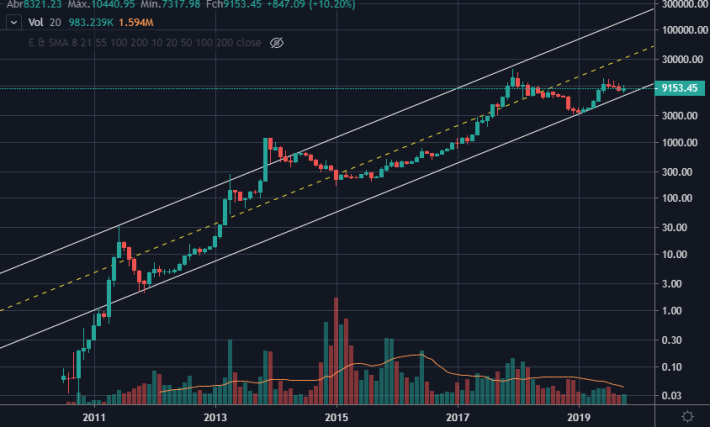 Bitcoin is in constant bull run for several reasons, including a maximum number of bitcoins to be created that generates deflation (explained earlier) and the technology disseminated through it. It is possible to draw a parallel channel in bitcoin that perfectly shows these valuations and the path to be taken by bitcoin.

In this article I have tried to address various issues about bitcoin so that reading is not tiring. Bitcoin is a fairly new asset and has a number of revolutionary features (such as blockchain) that are quite unstable but attractive. We can also observe that, because it is new, it is susceptible to manipulation, whether by whales, miners (which I did not enter in this article but it is possible) or governments that do not see the potential that this brings to social welfare.