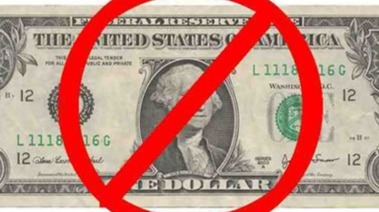 Is the end of the dollar coming?

Direct and serious monetary result of the outcome and the development of World War II, the dominance of the dollar as a world currency had a huge geopolitical significance. It established the United States as the dominant power in the free world, that is, where the market, statehood, and parliamentary democracy went hand in hand, producing economic growth and social prosperity.

At the same time, the dominance of the dollar meant the collapse of colonialism and thus the end of empires, which had already begun to falter since the beginning of the 20th century.

After 75 years of dollar domination, the question is whether it can continue, at a time when the world economy is changing, and so is American society.

In the 1960s, the French finance minister, Valery Giscard d'Estaing, complained that the dominance of the US dollar had given the United States the "excessive advantage" of borrowing cheaply from the rest of the world and living beyond its means. Since then, US allies and opponents have often echoed this grievance. But too much advantage also entails excessive burdens on US competitiveness and employment, which may become even heavier and more destabilizing as the United States's share of the global economy shrinks. The benefits of the dollar dominance come mainly from financial institutions and large corporations, but the costs are generally borne by employees. "…For this reason,

In this global monetary environment, the dominance of the dollar stems from the demand for it around the world. Foreign capital flows into the United States because it is a safe place to invest money and because there are few other alternatives. These capital inflows are many times higher than those needed to finance trade, and make the United States maintain a large current account deficit. In other words, the United States does not live beyond its means, but hosts the world's surplus capital.

The hegemony of the dollar also has a divisive domestic effect - that is, it creates winners and losers in the United States. The main winners are the banks that act as intermediaries and recipients of capital inflows and exert too much influence on US economic policy. The losers are the manufacturers and the workers they employ. Demand for the dollar raises its value, which makes US exports more expensive and reduces demand for them from abroad, leading to lost profits and jobs in manufacturing.

The costs are disproportionately borne by the (politically) volatile states in areas such as the Rust Belt - a consequence that in turn has exacerbated socio-economic divisions and fueled political polarization. Manufacturing jobs, once central to the economies of these regions, have moved across the seas, leaving poverty and discontent in the aftermath. Unsurprisingly, many of the hardest hit states voted for Trump in 2016.

The cost of servicing large capital flows is likely to increase and become more destabilizing for the United States in the future. As China and other emerging economies continue to grow and the United States' share of the global economy continues to shrink, capital inflows to the United States will increase relative to the size of the US economy. This will reinforce the destructive effects of dollar hegemony, further benefiting US financial intermediaries to the detriment of the country's industrial base.

Given these growing economic and political pressures, it will become increasingly difficult for the United States to create more balanced and equitable growth, while remaining the destination of choice for the world's surplus capital, with this overvalued currency and deindustrialisation. means.

It is very likely that, on the occasion of the Covid-19 pandemic and its dramatic effects on the US economy, we will soon witness a new global monetary turmoil, which is already predetermined by the course of the international gold price.

Bitcoin Mining Play from your smartphone use this code 10380185