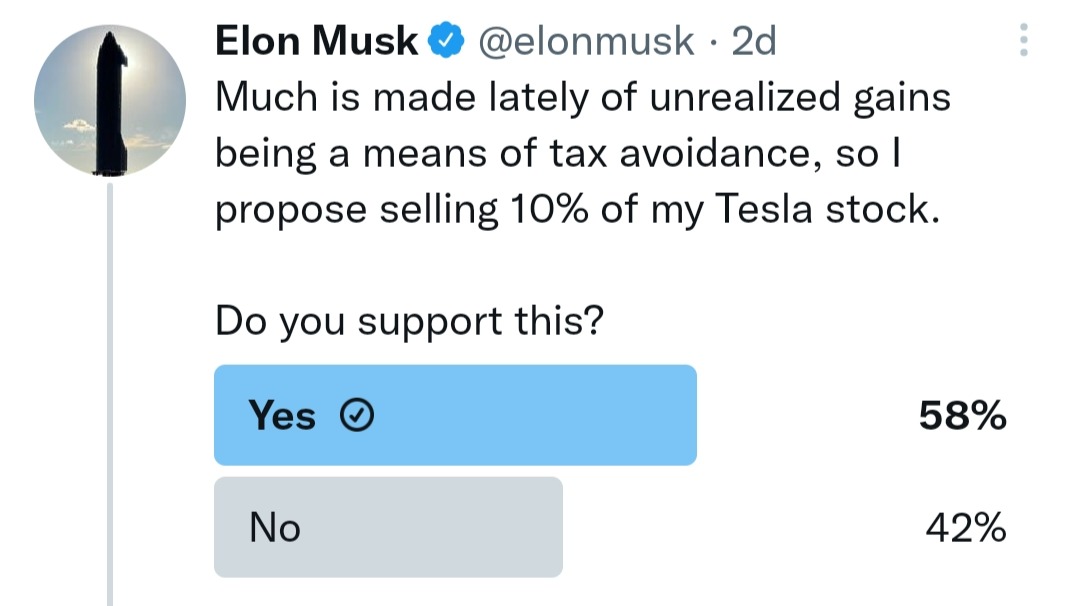 How world's richest man has put up the fate of 10% of his stocks to a Twitter poll?

We all have seen this news over the weekend -

Now there are multiple PoV to this event - whether its right or wrong, threatening the shareholder interest, Billionaire taxation, etc.

But there's another aspect to this , "Lorde Edge" tweet.

In another 5-10 years, this unrelated event will emerge as a foundation stone for Sports Industry!

Last year, a company called Socios came up with an idea that "Sports Fans are an integral part of the Franchise/Team". They started something called Fan Tokens on their own Blockchain called CHILIZ( $CHZ). These Fan Tokens are meant to be for Sports Utility Crypto.

"Fan tokens are a form of cryptocurrency that gives holders access to a variety of fan-related membership perks like voting on club decisions, rewards, etc"

The fan tokens are OFFICIAL currency which is done in collaboration with club/teams. Some prominent teams are :

So in future be we can see these options:

- Vote for 'Player of the season'

In turn, this will be source of non-sport revenue for the management. They'll finalize the top 3 contenders, and fans get to vote and choose.

Eventually, with appropriate regulations & legal frameworks in place the fan tokens would also be a way to redistribute profits in form of Airdrops.

Look at this unrelated idea from the lens of Corporate Actions in which shareholders have to put their say in important decisions - Appointment of Executives, M&A , Dividend Payment, etc.

Hello Everyone! I am FabPure I am a masters graduate in Marketing. I love personal Finance and everyday I try making less mistakes in taming this animal called - Blockchain. Learning from my mistakes I try to impart that experience in my circle. ^_^

Hello everyone, The aim of this blog would be to make everyone aware about the basics. In minimal words. I am a firm believer that Simple is The BEST Solution. Let's Make Blockchain simpler :)