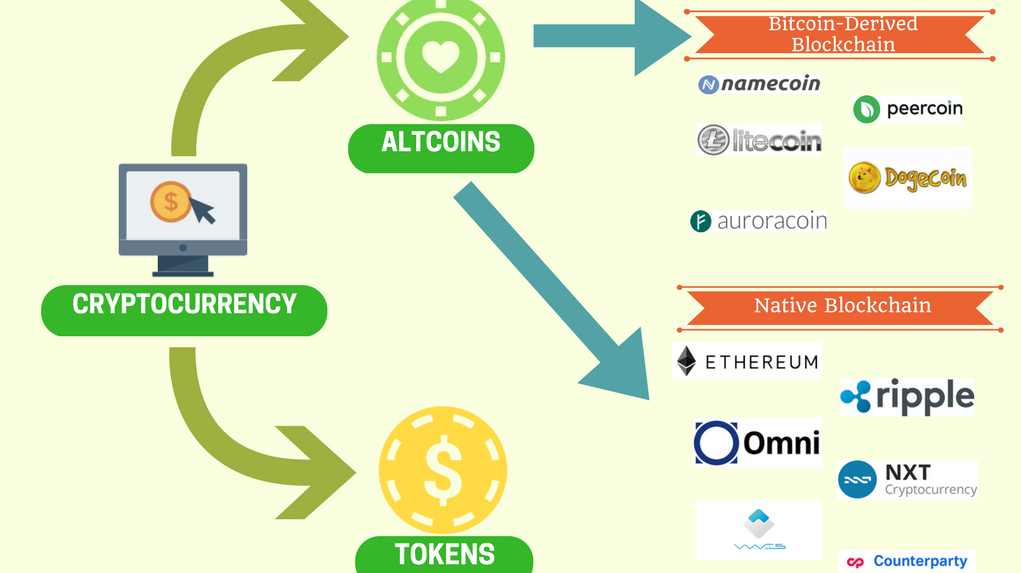 Coins, Altcoins and tokens, what's what?

Let's start by understanding the definition of cryptocurrency. Cryptocurrencies are digital or virtual currencies that are encrypted (secured) using cryptography. Cryptography refers to the use of encryption techniques to secure and verify the transfer of transactions. Bitcoin represents the first decentralized cryptocurrency, which is powered by a general ledger that records and validates all transactions chronologically, called the Blockchain.

Alternative cryptocurrency-coins are also called altcoins or simply "coins". They are often used interchangeably but are not entirely correct. Altcoins simply refers to coins that are an alternative to Bitcoin. The majority of the altcoins are a variant (fork) of Bitcoin. Built using Bitcoin's original open protocol with changes in the underlying codes, creating a whole new coint with a different set of functions.

There are altcoins that are not derived from Bitcoin's open source protocol. Instead, they have created their own Blockchain and protocol that supports their own currency. Examples of this coin are Ethereum, Ripple, Omni, Nxt, Waves.

Tokens are made on existing blockchains. By setting up and facilitating smart contracts, Ethereum is the most widely used blockchain token platform. Tokens built on the Ethereum platform are called ERC-20 tokens. However, there are other platforms such as NEO, Waves, Lisk and Stratis. While, as mentioned above, tokens on the Ethereum platform are known as ERC-20 tokens, NEO uses tokens known as NEP-5 tokens.

Because the developers of a dApp don't have to create their own blockchain, it saves them time and resources. They can use the functions of cryptocurrency with their application while benefiting from the security of the native blockchain.

Time isn't the only thing that saves them - if they were to create their own blockchain and coin instead of a dApp and token, they would also need to find miners to verify their transactions. It makes much more sense to connect many computers to a blockchain on which different applications can run instead of thousands of weak, mostly centralized blockchains.

Security tokens - most tokens issued by ICO are security tokens. The person who buys them invests their money in the ICO with the expectation of profit. Under Swiss law, these are treated in the same way as traditional securities.

Equity Tokens - if a token represents shares or shares in the company that it issues, it is an equity token. However, few companies have tried such an ICO because there are not many legal guidelines for what is legal and what is not.

Utility Tokens - also called application. They are used to give people access to a product or service.

Payment Tokens - have no other purpose than to pay for goods and services.

Tokens are created and distributed to the public through an Initial Coin Offering (ICO), a crowdfunding tool. It is similar to an Initial Public Offering (IPO) for shares. Many people love ICOs because they are a great way to identify interesting projects.

However, ICOs are also used for scam practices. They invest in a project after which the team disappears from the face of the earth.

The main difference between altcoins and tokens is in their structure; altcoins are separate currencies with their own separate blockchains. Tokens work on a blockchain that enables the creation of decentralized applications.