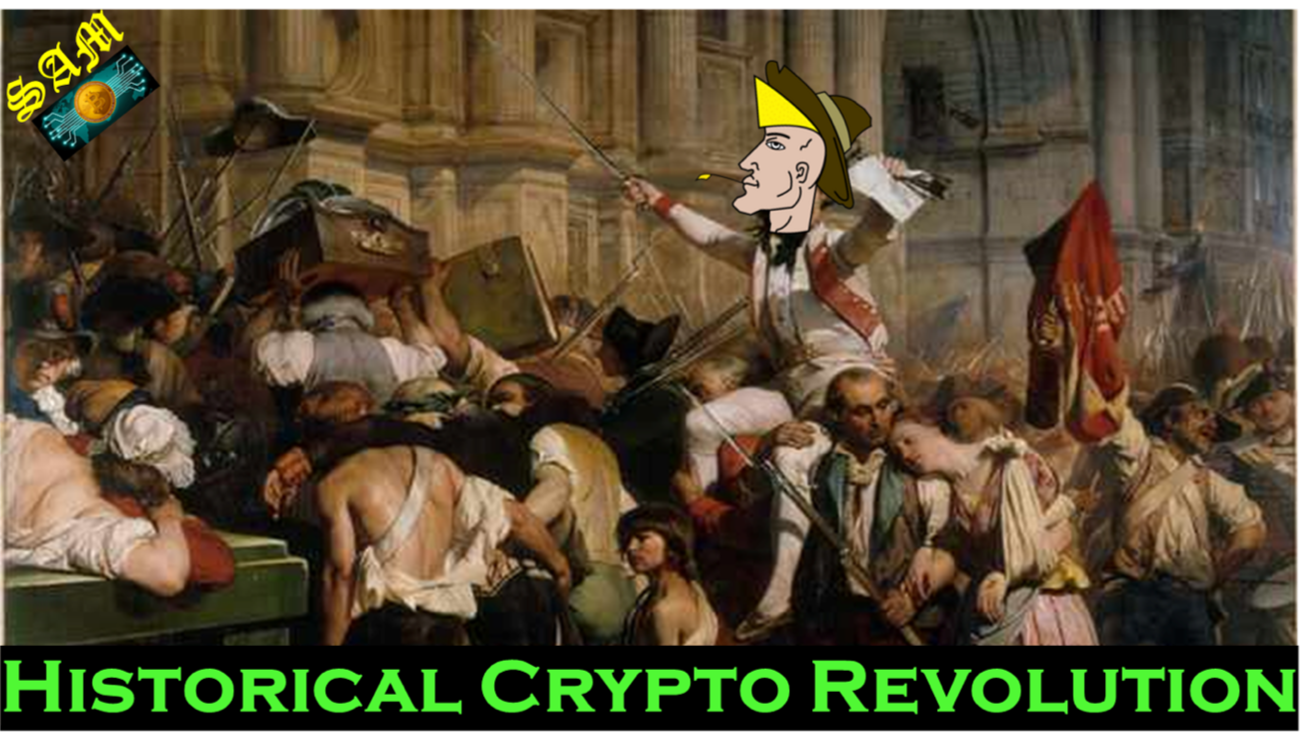 Disclaimer- This story is completely fictional and any resemblance to anyone living, dead or virtual is purely coincidental.

This story takes place in the ancient era of 21st Century where the world was tormented by one economic disaster after another and the situation reached a critical point when the world was inflicted by a highly infectious disease that spread faster than wildfire and caused majority of the industries to shut down.

This is the tale of heroics of our central character Chad the First, Farmer Extraordinaire who saved the masses from their imminent doom by his ingenious plan. 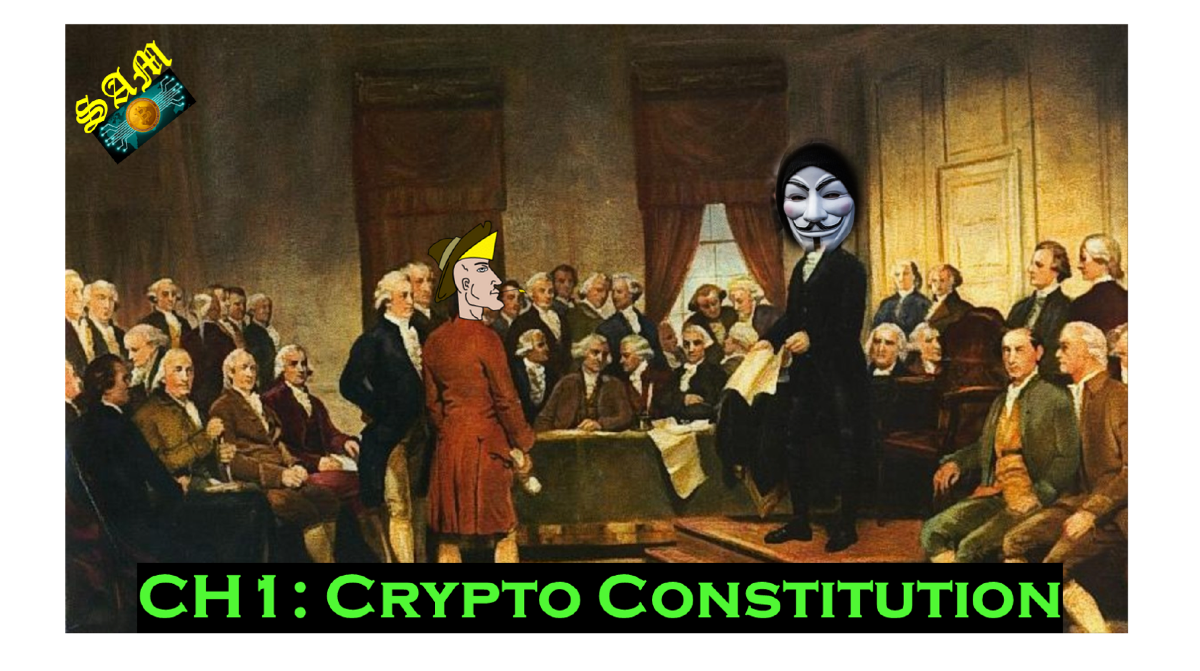 During the early years of 21st century the wise Satoshi the Elder created the Crypto Constitution laying emphasis that crypto was Of the People, By the People and For the People.

Satoshi was sick of the greedy landlords and barons who had amassed huge wealth through financial trickery and left the poor masses without even the basic necessities. Satoshi designed a flawless blockchain based constitution which will ensure everyone has equal access to money. All financial transactions will be duly recorded and be publicly available and transparent for scrutiny. This will stop the frauds being openly committed by the greedy moneylenders.

Handing over this constitution to the chosen Wisemen he disappeared into the woods never to return. He was a monk after all and had nothing to do with the monetary and worldly affairs.

The people rejoiced that finally there was a foolproof document that would ensure fair distribution on money and wealth across everyone. They would also not be dependent on any landlord or be forced to use the specific coins minted by them with their faces stamped on them.

This caused great worry amongst the rich nobility as they were aghast at the thought that the poor farmers who were basically their slaves would now have a chance to become their equals. They brainstormed about what evil ways can derail this project. The next day they appeared before the council of wisemen and demanded that they were not happy with the constitution and wanted to Fork Out. The wisemen unanimously replied “Fork Off”. 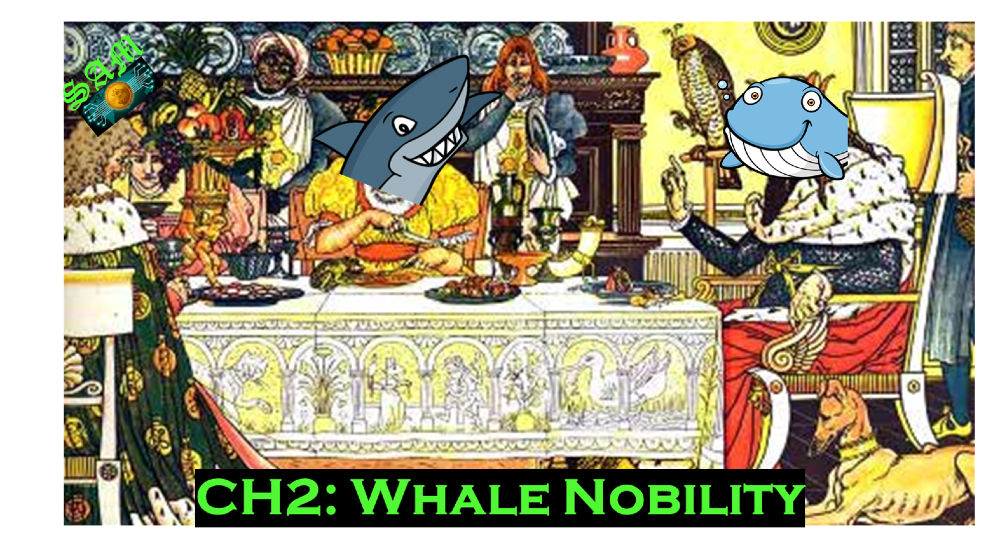 The money lenders went straight to the Whale Nobility castle where the Shark Aristocracy was also present. They explained everything that had happened at Wisemen council and the Blockchain constitution that Satoshi the Elder had presented.

The Nobility were really disturbed as this would mean an end to their kingdom. Nobody will care about their royal coins if they will use their own currency. They said they need to stop this right now and they should use the following tactics to ensure that the farmers don’t start using people’s crypto:

· Pass anti-Crypto Laws: All the rulers and landlords passed laws in their provinces that crypto was illegal currency and they can only use the gold coins issued by the kings.

· Spread Fake News: They asked the Town Crier to go from village to village spreading tales that crypto was a scam and would fail very soon

· Create Doubt: As the Farmers did not have much knowledge of the blockchain constitution the king sent his informers to spread stories that crypto was a fraud and they should never trust a currency they can not hold in their hands and they should only trust gold which they can see and hold.

CHAPTER 3- Greed of the Whales! 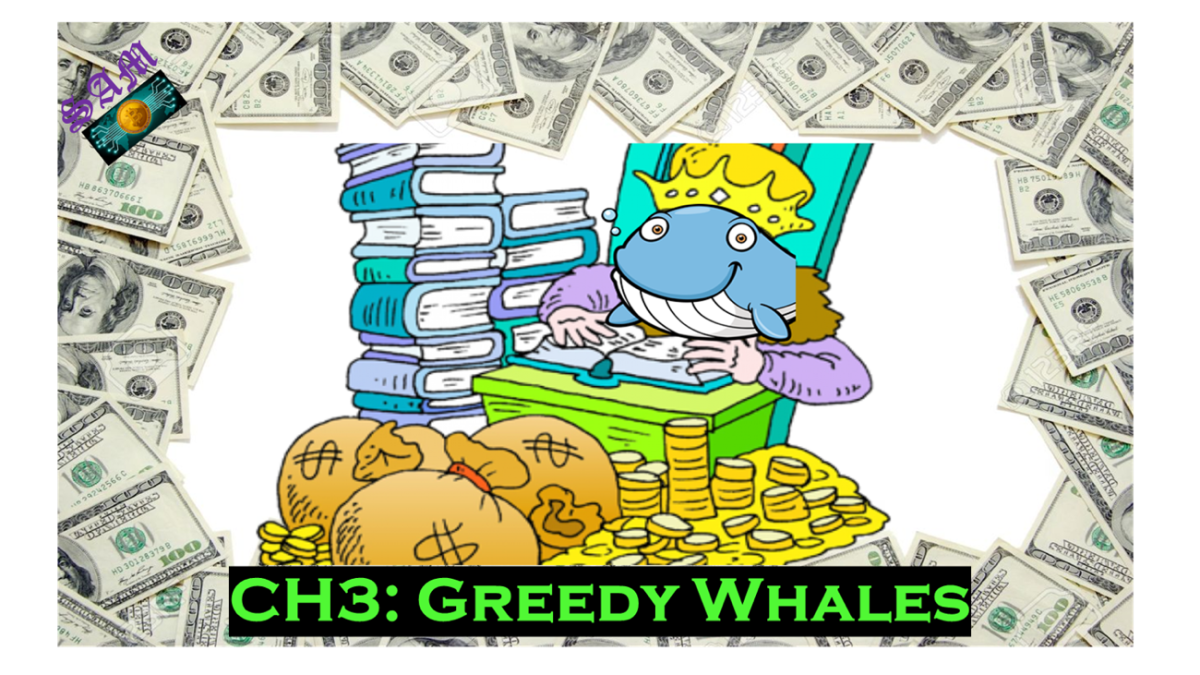 Now the farmers were scared of using crypto thanks to the propaganda created by the Whale kings. Chad the First, Farmer Extraordinaire had read Satoshi’s constitution completely and he understood how important it was. He realized that if the farmers don’t understand crypto they would never be free of being exploited by the Whales.

He took it upon himself and went from village to village explaining the core principles highlighted by the Crypto Constitution and Principles of the Wisemen:

· Not Your Key Not Your Coins: Don’t use the corrupt moneylenders as he does not give you the key, Store crypto in your warehouses and control your keys.

· Decentralization will set you Free: Don’t trust the balance sheets of the money lenders. They manipulate it and rip you off. Use Satoshi’s blockchain where all transactions are stored and can not be manipulated.

· HODL On: Store your coins safely for long term use as it is clear from the weather forecast that “Winter is Coming”. 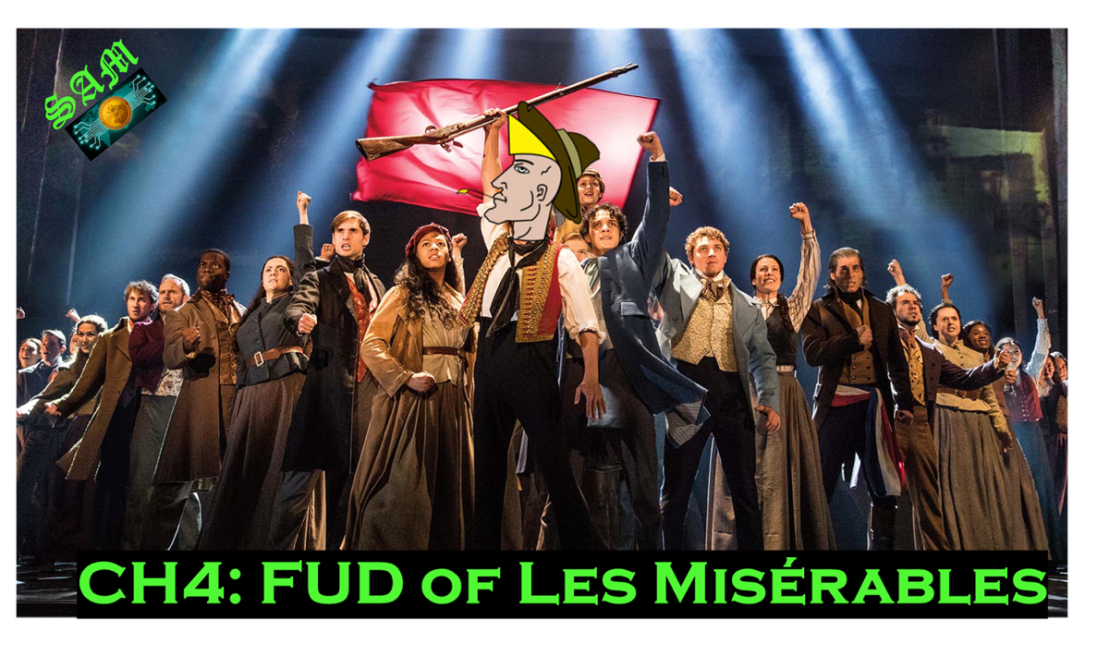 Despite the best efforts of Chad the First, his fellow farmers were overcome by FUD (Fear, Uncertainty and Doubt). They were scared by the falling prices of crypto and started selling all their coins in panic.

As Chad suspected the Wales and Sharks were buying up all the coins that the poor farmers were selling. Soon they controlled majority of the coins and farmers were left with hardly any coins.

The situation got worse when the Whales started their own corporations called WeFI (Wealthy Finance) and made their own governance coins which gave them rights to make whatever laws on the blockchain as they please. The poor farmers who had few coins had no voting power.

Things reached unbearable levels when the Moneylenders started a project called SushiWushi promising 100,000% APY to people who will deposit their coins. As soon as the poor farmers lured by the unbelievable APY deposited their coins the greedy Moneylender took out all the coins and said the APY was now 1%.

Chad could not bear it anymore and collected all the farmers and started marching towards the Whale King’s castle. 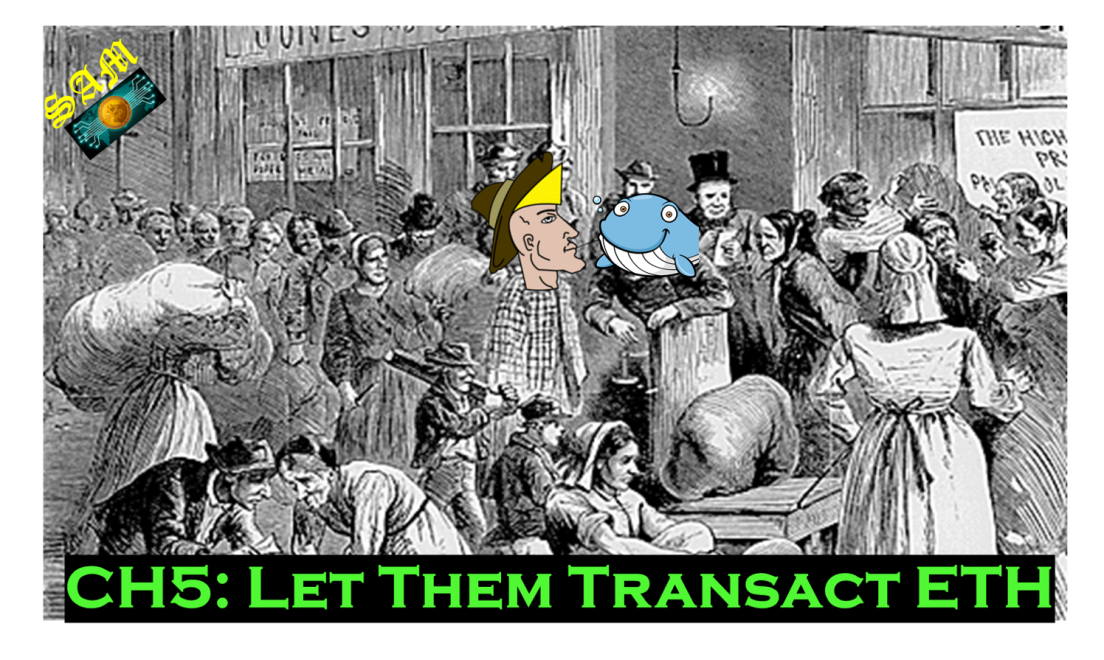 Chad smashed open the gates of the castle and surrounded the Whale king with his group of farmers. He told him that they are well aware of the scams he is performing. He knew that he tricked the poor farmers out of their hard-earned coins and made a complete mockery of the Blockchain Constitution created by Satoshi the Elder. Everyone knows that the WeFI schemes launched by Whale King were a complete scam and the 100,000% APY promised was totally fake. Chad said the farmers are in a very grim situation with not even sufficient money to buy bread to survive.

The Whale King replied that he did not see any problem. If the poor wanted to take out money they should just go to this WeFI platform and “Let them Transact ETH”.

Chad the First, Farmer Extraordinaire was infuriated on hearing this reply. He shouted at the whale saying that his reply showed how indifferent he was to the plight of farmers. Whale did not even realize that farmers do not have any money to pay for the ETH fees which had skyrocketed thanks to the market manipulations of Whale and his moneylenders. His SushiWushi scheme had flooded the blockchain and made ETH transactions impossible for the farmers.

Chad said the time to negotiate is over and he declared revolt against the Whales and Sharks. 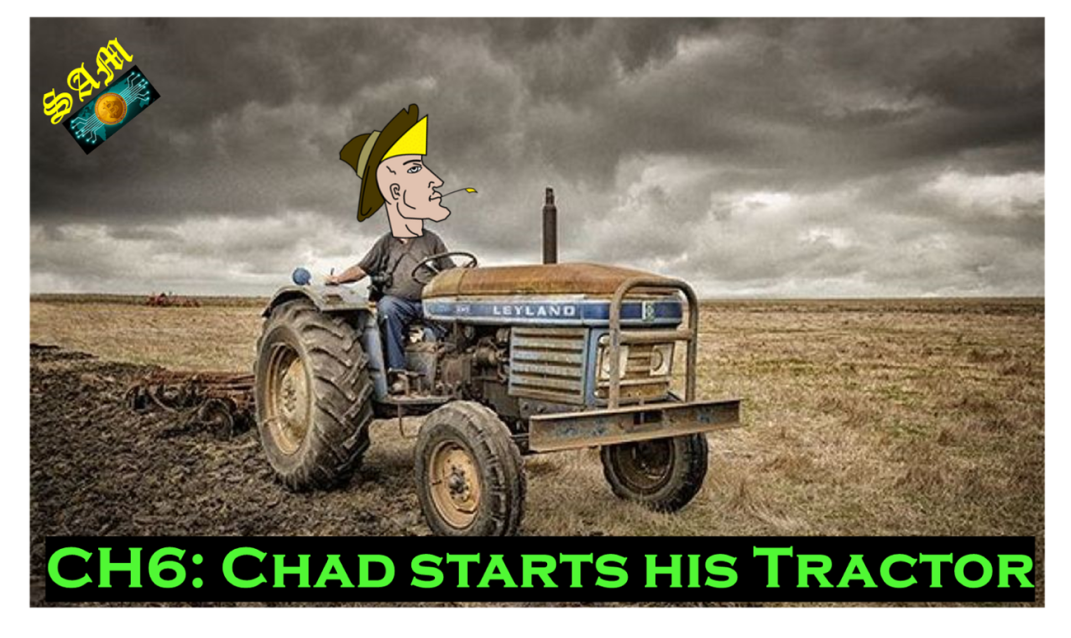 Chad grouped all the farmers and said that as long as we keep depending on the WeFI schemes of the Whales we will always remain poor as they are manipulating their schemes and not giving us any returns. They have also artificially inflated the APY and tricked us out of our savings. They have made the ETH fees so high that it is impossible for us to claim our returns.

There is only one option left we need to start our own scheme will be FaFI (Farmers Finance). We will collect all the coins we will have and create our own coin and call it FARM which will help all farmers get bread. We will manage a stable APY which will provide wealth and stability to the hard working farmers.

CHAPTER 7- Bread for all the Crypto Clans! 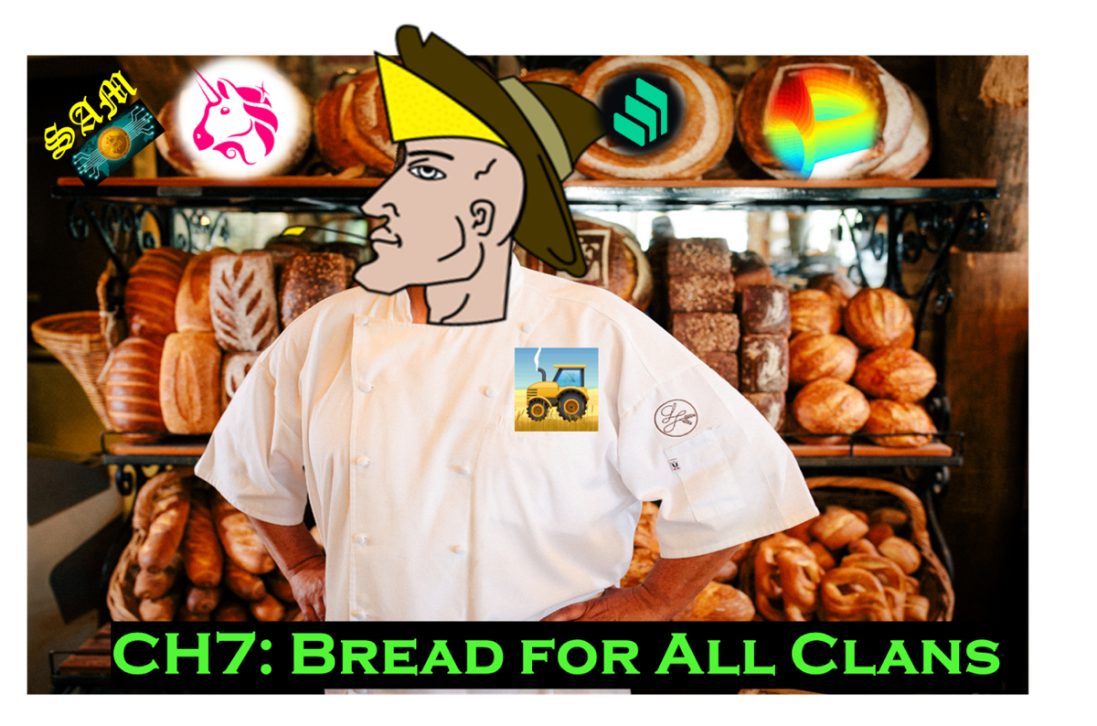 The farmers agreed that this was a wonderful idea and they were all in favor of their own farm with their own token. They still had one challenge though most of the farmers still had money stuck with WiFI scheme of SushiMushi and they were all using different coins some had ETH, some DAI, some USDT. How possibly can everything be managed in a single platform. Chad the First, Farmer Extraordinaire said they need not worry as he has thought of everything. Their farm will provide stable APY rates for popular coins and will make common pools to make transactions in the liquidity pools of Curve, Uniswap, Compound and even SushiWushi so they don’t have to worry about paying the transaction costs individually.

They raised Chad on their arms and started celebrating and moved towards the Whale’s castle as there was one last thing to be done. 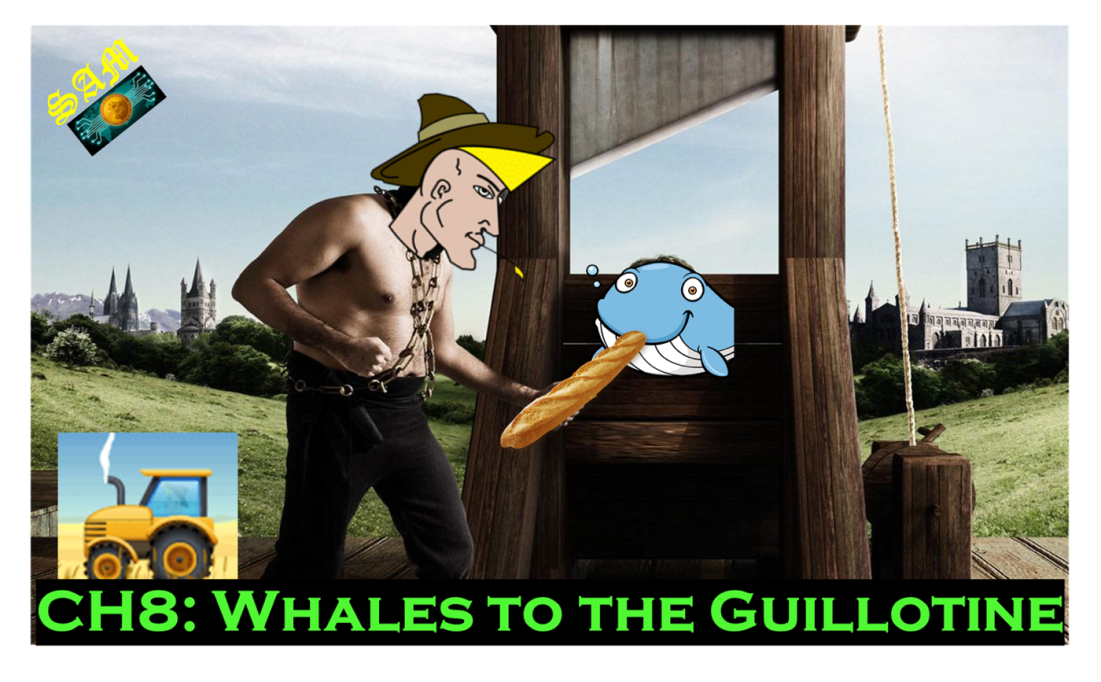 Warning- This section is highly and unnecessarily violent, therefore young and squeamish listeners are advised to stop listening the tale that follows.

Chad smashed into Whale’s castle and told him that his game was up, farmers had created their own liquidity farm and they had no need for the scammy schemes of the whale. They were now going to suck out all his liquidity and distribute it fairly amongst the hard working farmers. Whale was dragged to the guillotine and Chad asked him if he had any last wish. Whale said he had heard a lot about Chad’s delicious bread and wanted to taste it once before being guillotined.

Chad gladly obliged and this marked the end of tyranny of the whales and sharks.

Once Chad the First, Farmer Extraordinaire returned to the farm with his fellow villagers where they worked hard with all their coins and all their pools and enjoyed the fruits equally amongst them. Looking down on them Satoshi the Elder smiled contently that his wish was finally true.

Join me on Medium - https://medium.com/@spradhan.dce