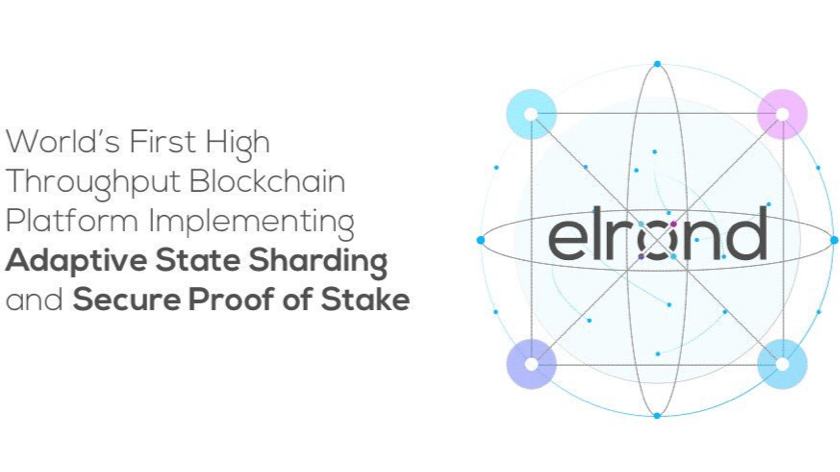 What is Elrond network?

Elrond is a scalable value transfer protocol for the digital economy and the first dApp to run on a truly state sharded architecture with Aiming 10k tx/sec, minimal latency and negligible fees.

You can check their whitepaper here.

Elrond is a user-friendly blockchain for deploying a programmable money and unstoppable applications.

Everything changed when the internet transitioned from dialup to broadband. Elrond brings broadband performance to blockchain. 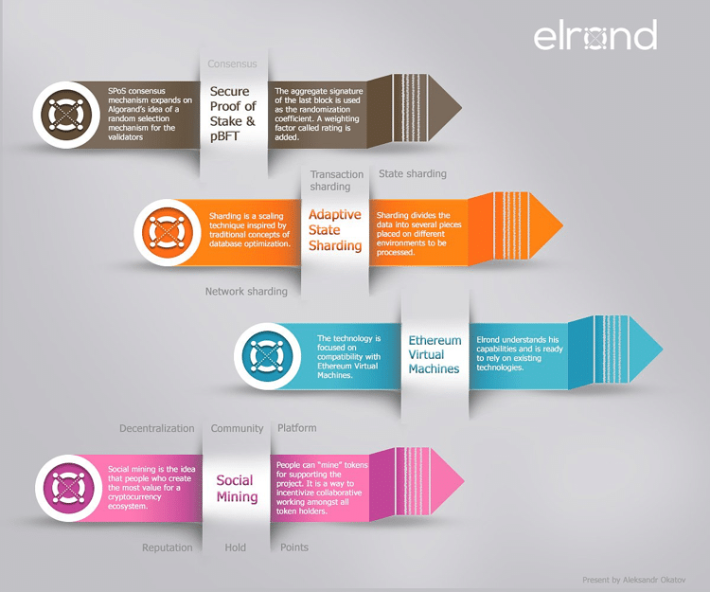 Proof of stake is a margin and alternative of a proof of work, why? because its provide a key benefits compared of proof of work.

1. such as energy and computational savings
2. Increase decentralization
3. Potentially safe by the network and considering the cause of 51% attack

If you compared Elron to Ethereum. Elrond can eliminates both energy and computational waste from PoW algorithms by implementing a SPoS consensus while using transaction processing parallelism through sharding. 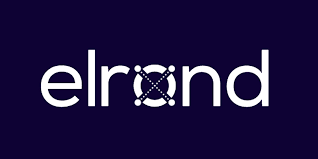 A Network of Proof-of-Stake Blockchains
Elrond’s results so far are impressive, but even they will admit there is no ‘one protocol to rule them all.’ The broader notion within the industry is that, eventually, a network of interoperable blockchains will communicate and transfer data/value with each other in a mutually beneficial dynamic.

An important caveat of interoperability, however, is that many blockchains bootstrapping as PoS are only compatible with ‘fast-finality’ consensus blockchains — aka other PoS blockchains. For example, Cosmos requires a custom bridge to Ethereum in its current proof-of-work format, called Ethermint. Elrond will work in a similar format where bridges between disparate chains require specialized adapters if they are not compatible with Ethereum’s EVM — which Elrond will connect to with a bridge.

The larger takeaway though is that an ecosystem of PoS blockchains with an emphasis on scalability and communicating with each other is on the cusp of materializing. The market will eventually determine which blockchains prevail for specific use cases, and Elrond is positioning their platform as the ‘user-friendly blockchain for deploying programmable money and unstoppable applications.’

A high-performance infrastructure blockchain congruent with the exacting demands of modern applications should prove a significant draw for many developers, and eventually, more users. Public blockchains have come a long way since Bitcoin’s inception, but they still struggle to attract mainstream users. Perhaps an ecosystem of scalable, interoperable blockchains can shift that narrative. 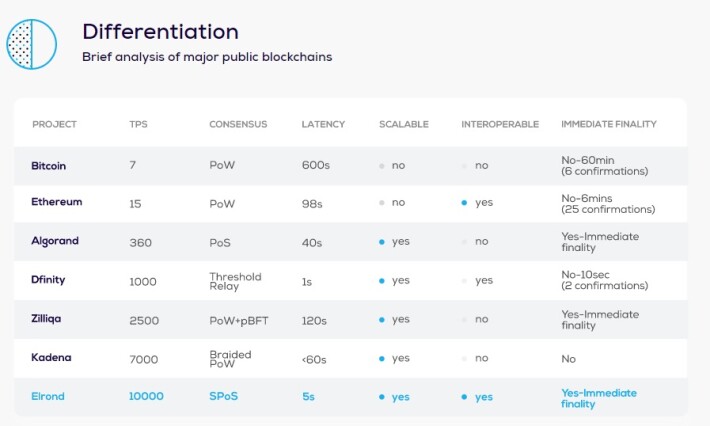 1. High Scalability - Comparable in throughput as to centralized counterparts.

"Comparable in throughput as to centralized counterparts"

Allowing the number of shards to change dynamically according to the available resources (validator nodes) and network usage has a huge impact not only on the throughput, but also on efficiency. Our adaptive state sharding mechanism is based on a binary tree structure, once the number of shards has been computed; this number is used for a deterministic mapping of account addresses to shards. Transaction dispatching in shards is done also deterministically through the mapping of the sender and receiver account addresses to the designated shards. The almost linear scalability of our solution provides the backbone for surpassing the throughput of centralized counterparts

"Making PoS secure and compelling"
Elrond has proposed a novel approach to consensus called “Secure Proof of Stake” combining eligibility through stake and rating, random validator selection and an optimal dimension for the consensus group.

The consensus protocol starts by randomly sampling a smaller consensus group out of all eligible validators in the shard (for reduced communication) using a randomness source derived from the previous block’s signature. The randomness source is unpredictable before the signing of the previous block. The sampling is deterministic, meaning that every node can compute the list of validators in the consensus group and the first node to be selected is the block proposer.

The block proposer aggregates transactions into a new block and sends this block to the validators in the consensus group for verification. Each validator will verify the validity of the block, process the transactions and if everything checks out will participate in the pBFT consensus. The voting in the pBFT is done for every validator by sending a signature for a multisignature scheme. If the proposer collects more than 2/3 + 1 signatures from the consensus group members, the block is considered validated, the aggregated signature can be added to the block and the block disseminated in the entire shard. The next consensus group will be randomly sampled using the new signature.

"Decentralizing cross-blockchain operations"
The idea of decentralization and genuine blockchain interoperability are very close related to each other. Currently most of the interconnection and interoperability between different blockchains are conducted through exchanges and third party trading platforms. This defeats the purpose of blockchains not having third parties, while deteriorating the seamless and secured course of transactions’ processing. There is no “one protocol to rule them all” that will be adopted by all other blockchains, but Elrond’s approach will narrow the gap between most important blockchains.

In the first step, we target Ethereum Virtual Machine compliance: the ability to run smart contracts written in Solidity for Ethereum with little or no modifications, on the Elrond Virtual Machine. Our VM’s implementation will hide the underlying architecture isolating the developers of smart contracts from system internals ensuring a proper abstraction layer.

In the second step, we target Ethereum interoperability: the ability to exchange seamlessly Ethereum and Elrond without a trusted third-party. This way, transactions between Elrond, Ethereum and ERC20 tokens could be processed securely without a centralized exchange, where the user must have an account, does not hold the private key for his account and also maybe go through a KYC process where the anonymity is lost.

Important aspects that we will take into consideration when building our “bridges” are privacy and security. Processing transactions that go through our bridges will be intrinsically secured by multi party computations of the private keys associated to the temporary bridge accounts.

In the third step, we would go further with the interconnection and interoperability, targeting other important blockchains, both public and private, by expanding our bridges. This approach requires specialized adapters for each chain that is non EVM compatible and wants to operate with Elrond.

"Validating State Sharding Architecture"
In it we’ve basically built technical backbone containing a communication p2p module for direct messaging, information broadcast and channel communication; cryptographic module dealing with signing and verification for transactions with Schnorr scheme and Bellare and Neven’s multi-signature method for blocks; data module to define and describe how the different data types (blocks, transactions, accounts, etc) are connected to each other and stored in the system; execution engine used to process transactions and assemble blocks while replicating the state across the network to ensure consistency and security; chronology module used for synchronization and time-passing perspective, ensuring a well structured bootstrapping process and proper timeouts; consensus module using a rudimentary consensus in a round-robin setting, allowing everyone to take turns in proposing and validating blocks, running independent consensus groups in each shard; sharding module using communication topics and enabling both intra-shard and cross-shard.

Please see their roadmap below.