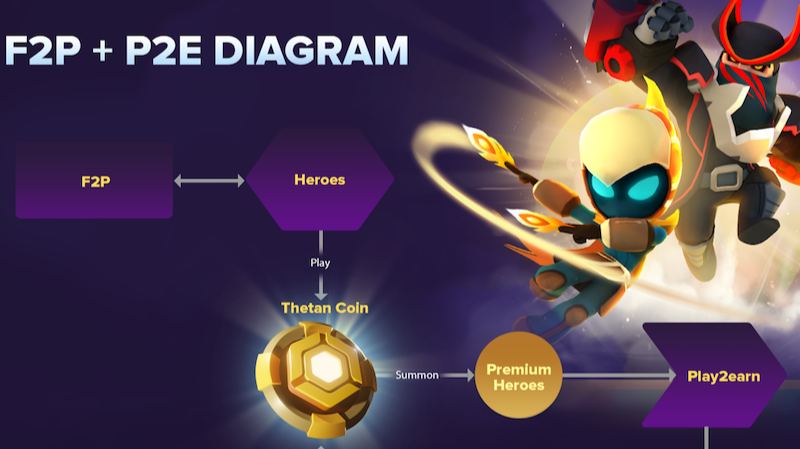 Blockchain gaming is taking over the gaming world with the new play-to-earn format. There is a plethora of new games out to try and it’s hard figuring out where to invest your time or if it’s worth getting through the steep paywalls. That’s what these reviews are intended for - to give you a little insight into the games and maybe a little strategy to help capitalize on potential earnings. If you haven’t already read it, you can check out my review for the Geo-Location game Coin Hunt World here.

What is Thetan Arena?

Thetan Arena is a popular team MOBA (multiplayer online battle arena) game that promises to pay Crypto for playing. It is a team based shooter where teams have to kill the enemy team whilst completing objectives, with each win you have the chance to win some Crypto (but there are caveats).

But can you really make any significant amount without having to buy in like most P2E (play-to-earn) games? Let’s find out.

When it comes to checking and reviewing any type of games, even play-to-earn games, I can be pretty critical from the get go. Rightfully so too, there is an infinite number of great games to be entertained by. The entertainment factor should always outweigh the earning potential.

With all that being said the first question we should answer is:

The short answer is; yes, absolutely. This is a really enjoyable team based shooter that features a rotating playlist of objectives such as classic deathmatch, battle royale, tower siege or superstar. Plenty of variety to keep the game fun and not too tedious. I tend not to play more than 20-30 minutes at a time and have put roughly 8 hours into the game now. If you’re into lightIt’s fun enough to keep me around for now.

Now, the second question is;

Can you earn without buying into the game?

Not really, this game is a real grind. If you google any search terms to do with earning on Thetan Arena you’ll be bombarded with sensational Youtube thumbnails of ridiculous quotes like “EARN $600 A DAY ON THETAN ARENA?!” (I’m not exaggerating, that is a direct quote from a youtube video title).

The reality is you’re not going to make anything close to that without buying into the game with a premium character. To purchase such characters you can use the in game currency $THC (Thetan Coin). The cheapest box you can purchase is a common box and that’ll set you back a minimum of $69.95. You can also purchase characters other players are selling in the marketplace and may be able to pick up a Premium character cheaper but bare in mind, they only have a certain amount of games they can earn from, they will already have been used a few times and you can only earn from winning. One of the few hoops they make you jump through to earn from the game.

You can purchase these items with the THC you earn in-game, but you’re going to need to accumulate at least 1000 coins and let me tell you right now, that is going to be an unbelievable grind.

Unfortunately it doesn’t matter how good you are at the game, you can’t earn points to rank up without a winning game, and if you lose the next game you’ll lose all the points you gained from your last win. If you have a few friends you can get to play with you and you communicate as a group, you’ll have a lot more success. But the honest truth is I think the matchmaking in this game is deliberately randomized to reduce everyone's chances of getting wins. You don’t get matched with people in your rank, you could get matched with elite players and total noobs. I’ve had win streaks of 5 games and then lost 7. I wouldn’t say the game is rigged, but they put obstacles in the way of getting wins and earning.

Here is a screenshot of my current ranking:

As you can see I had already reached Recruit 3 division, got close to the next one that hit a losing streak and it took me below Recruit 3.

A fair matchmaking system would actually make me want to invest in a premium character and play more of the game, but in its current state all you’re essentially doing is gambling with your finances that you’ll A: get a character you actually want to play with and B: be matched fairly against other players and get wins based on skill and teamwork, not whatever overpowered characters & highly experienced players you are competing against.

Below is another screenshot, this time of my games played to give you a sense of how much it takes to progress in this game:

Cashing Out Your $THC Coin

Another major flaw with the Thetan Arena P2E system is that it takes a ridiculous amount of game time to accumulate enough to cash out.

Let's say you’re just enjoying playing the game but you would like to cash out your THC coins you’ve earned.To get to the minimum payout for Non-NFT Heroes & free characters you need to have a minimum of 30 gTHC coins & have reached Bronze 1 division. I know what you’re thinking, how hard can it be to get to Bronze?

That depends on a few things, skill definitely being one of them. But the other one is just pure luck. As it’s a team based shooter with different objectives for each game type, teamplay makes all the difference. If you can get a few pals together, really learn the game and objectives, strategise and communicate, you’ll have far more success and quicker progression. You get more experience for wins than losses, obviously. So you’re going to want every win you can get if you’re playing with a free character. 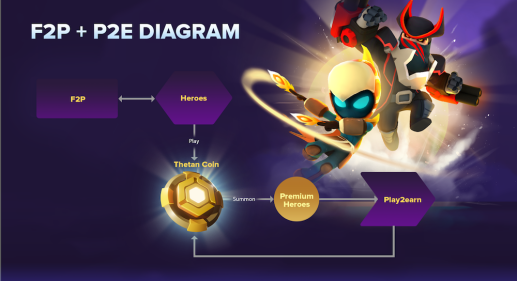 One part of this model that’s missing is that while this game is technically a ‘play-to-earn’ game it is also a Pay-to-Win game. You can absolutely earn from this model they’re showing here.. But does anyone honestly have that much time to spare? Granted there are a couple of extra ways to earn in game such as playing in special events. If you want to earn from Thetan Arena you need to win, and to win you’re going to need a great character because the default ones are severely underpowered compared to premium characters.

If earning Crypto from mobile gaming is your goal, your time would be better spent trying genuine free-to-play and play-to-win titles such as Coin Hunt World that has an immediate payoff.

However if you’re not at all fussed about the earning aspect of Thetan Arena and just want a fun new game to play, then absolutely try this out. All my scrutiny of their play-to-earn model aside, the game is genuinely fun. There are non-premium heroes you can purchase to use in game if you would like more variety, but you won’t be able to earn from them.

All in all, as a game for pure entertainment purposes Thetan Arena is cool! I’m still playing it for now. As a P2E game I don’t rate it very highly, it’s a poor investment of your time if you are looking to make some money. If you broke down your hours in the game to your first payout you’d probably cry. But if you have the money to invest in a premium character and try that out you’d potentially make some profit. But even then I would recommend practicing the game for a few hours first, and if you can then get a decent team together.

Thetan Arena is available from the iOS & Android store for free right now!

Have you played Thetan Are or plan to? Let me know what you think of it in the comments below.

Photographer, Writer, Gamer & Crypto-noob. Learning all about Crypto & the many ways to earn it. In turn, sharing what I learn with you!