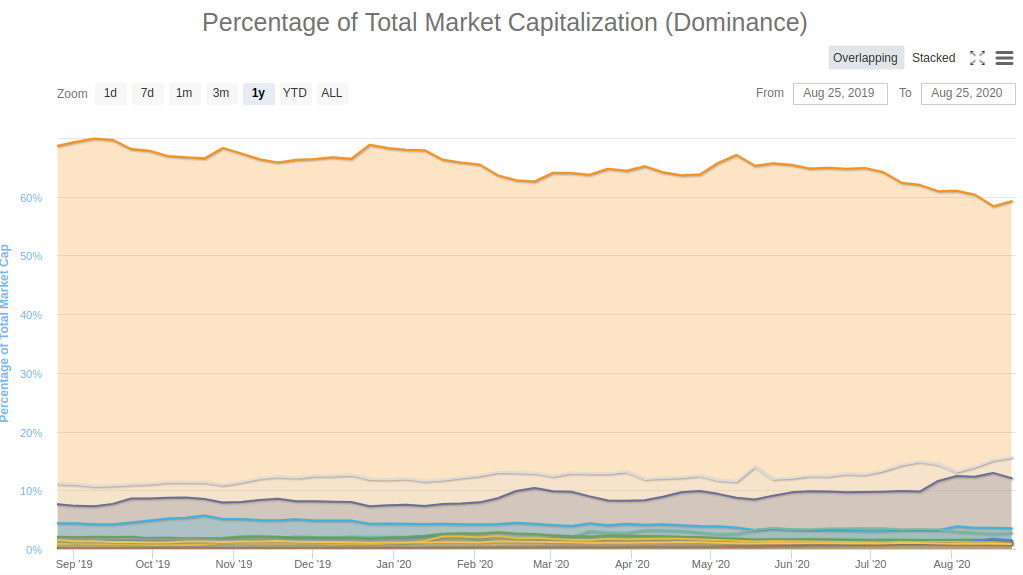 Why Diversification is Key in Today's Crypto Market

Over the past year, Bitcoin's dominance in the cryptocurrency market has steadily declined from a peak of 70% to just under 60%. Over that time period, many low-cap gems have increased substantially in marketcap. It makes sense, as more people come to realize the innovation and potential of these other projects that are building upon the original concepts introduced by Bitcoin and Ethereum.

In my mind, the Bitcoin maximalists will no doubt be proven wrong in the future. There are just too many bright minds working on so many projects for all the wealth to flow into a single coin. Maximalists will often compare the market cap of Bitcoin (208 billion) to that of gold (9 trillion) and comment on how much room for growth Bitcoin has. We must also consider how the so called "alt-coins" have much greater room for growth compared to Bitcoin. The vast majority of innovation is happening in the lower valued projects, and I believe innovative projects will win out in the end.

When it comes to investing in cryptocurrency, diversification is key. At this stage of the game, it's impossible to predict which of these projects will ultimately succeed in the future. Therefore, it's a good idea to spread your wealth amongst several projects that have potential. We are talking about low market cap gems with a market capitalization of anywhere from 1M-10M that could potentially reach billions or hundreds of billions of dollars one day.

Especially when taking into account the current worldwide monetary policy of endless stimulus, a significant sum of the printed money will end up in the cryptocurrency market, and eventually that capital will be directed to the most useful, user-friendly, and affordable projects that ordinary every-day people actually want to use.

What is the best way to find promising projects with significant potential? It requires having an open mind, doing some research, and having some critical thinking skills.

Subscribe to crypto YouTube influencers such as Blockchain Brad, The Crypto Lark, and Ivan On Tech. Be sure to pay attention when they announce projects that you've never heard of before. Visit the project's website, search them up on YouTube, scan over their Twitter account, join their Telegram channel and find out what it's all about.

Follow these projects on Twitter, add them to a list, and keep up with them on a daily basis if possible. Oftentimes platforms will announce the launch of a new token that you can allocate a small amount of capital too. Also, sometimes people will show up in the Telegram channel to ask questions about competing platforms that are ranked quite low on Coinmarketcap and CoinGecko.

You don't need to invest a significant sum of money considering the potential behind many of the projects. If you pick only one winner, the payoff could be quite substantial.

Of course, it's impossible to research every single project out there, as there is an infinite amount of them. But over time, you will learn which influencers are trustworthy and use your judgement to decide which projects are worth researching. You won't be able to catch all the winners, but you will certainly discover some of them before the masses pile in.

As with any skill, the more experience you acquire the better you will be. Crypto is still a relatively young industry and most people don't have that much experience, so they must fumble around at the beginning. Take comfort in knowing that while you will make some mistakes, overall this industry is setup for massive growth in the short and long-term. Be consistent in your research, follow projects and influencers for updates, and overtime you will become better at investing. Don't be afraid to take some risks! It's the best way to learn.