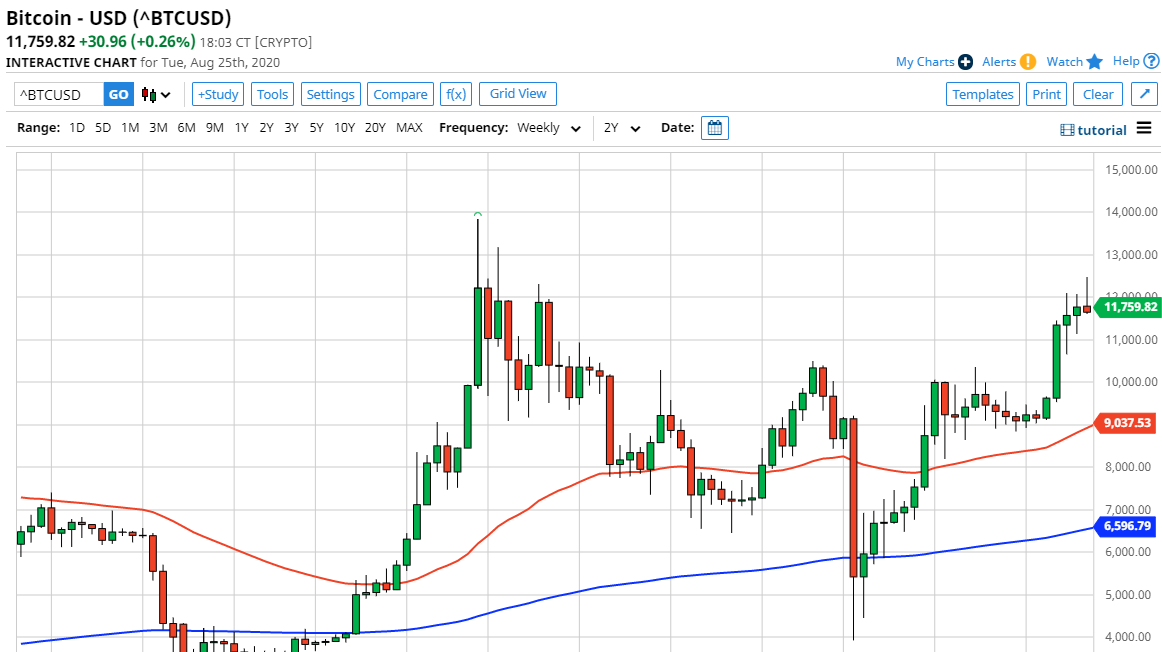 Bitcoin Weekly Price Forecast (8/30/20) - Loading Up for a Bigger Breakout?

Bitcoin initially rallied last week, rising almost $1,000 to the ~$12,500 level before eventually giving back most of the gains and forming a inverted hammer. This is a bearish candlestick on its own, but when you consider where it is in this chart, this is after four bullish candles in which Bitcoin rose over 25% from the $9,000 level to over $12,000. Given the recent price action and convincing rally, Bitcoin probably needs to cool off for a bit and digest the gains from the past month or so and build up more momentum for the next leg higher. 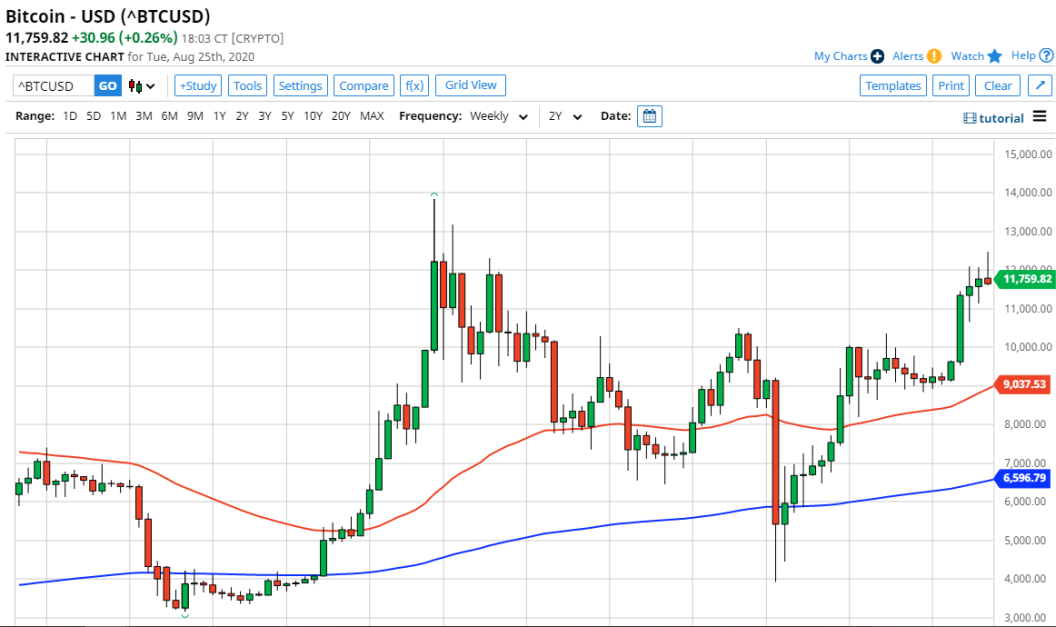 Bitcoin continued its streak of forming higher highs for the fifth consecutive week, despite surrendering most of the weekly session's gains and forming an inverted hammer. If you look at the chart above, you'll notice Bitcoin has found quite a bit of resistance between $12,000 and $14,000 in the past, as recently as last June. This is no surprise, and given the macro economic fundamentals and technicals below, I see no cause for concern.  In fact, this is probably a necessary progression and indicative of a healthier bull market than 2017's parabolic run, much like today's stock market.

Bitcoin is currently trading above the 50 and 200 Week EMA's, which should act as significant long-term support below at ~$9,037 and $6,600, respectively. If Bitcoin were to fall off a cliff and somehow drop below the $10,000 level, where there is massive support and the 50 Week EMA at ~$9,000, look for buyers to step in around the 200 Week EMA around $6,600. If Bitcoin falls below that, the new Bitcoin uptrend is in jeopardy. We suspect this is only possible with a significant liquidity event, such as another COVID-related March-caliber sell-off; even then, we see such an event as short-term weakness and a medium-long term accumulation zone. In any event, it's looking more and more likely that a modified 'W' economic recovery is the most likely market scenario, and Bitcoin is not entirely uncorrelated to liquidity events in legacy financial markets, even if for only a few days. Interestingly enough, if you look over time, Bitcoin has become increasingly uncorrelated to traditional markets, only trading with equities for major downturns on days of high volume; but 30 days later, regains its status as almost completely uncorrelated.

My personal educated view, based on the underlying bullish fundamentals and supportive price action above and on the daily chart, is that Bitcoin is going to consolidate the most recent gains and higher high, as it did for 3 months from May - July this year. Markets need buyers and price discovery, and as governments continue to recklessly print billions of fiat without recourse, Bitcoin's Stock to Flow ratio overshadows gold, and new investors buy their first (or more) Bitcoin every day, Bitcoin's outlook has never looked stronger. While it remains to be seen whether Bitcoin's price can soar as high as six figures, it seems everything is aligning for Bitcoin's market cap to be in the trillions, not billions.

Looking ahead, Bitcoin is a buy on the dips scenario, with medium- and longer-term investors looking to add on pullbacks, particularly the $10,000 and ultimately $9,000 levels below, which should be ironclad support. Next immediate resistance overhead is the July 2019 highs around $14,000. The good news is that $14,000 is probably the last stop before Bitcoin runs up to new all-time highs around $20,000, as there should not be many sellers between $14,000 and the previous all-time highs around $20,000 US. Longer-term, the sky is the limit for BTC, especially if the Lightning Network Upgrade is implemented in the next 12 months to accommodate new money entering the market and mitigating high transaction fees.