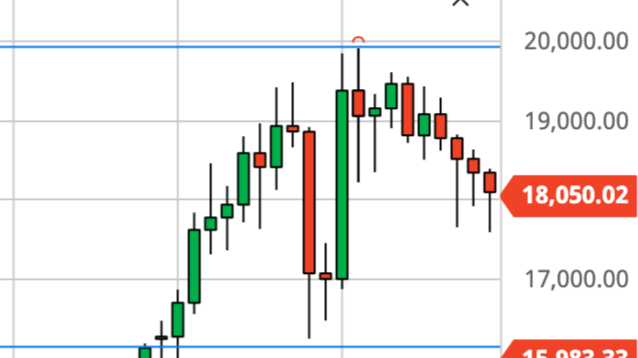 Bitcoin fell again on Friday, closing lower for the fourth consecutive trading session to end the week on a nasty bear streak. Bitcoin has drifted lower during the week, surrendering about $1,000 as it caved through $19,000 and is now flirting with entering the $17,000s once again. I have been saying for a couple weeks now that Bitcoin was overextended and is likely to pull back to consolidate and digest the gains of the Oct-Nov rally, and that is precisely what's started to occur as of late. I'm looking for Bitcoin to retrace to around the $16,000 level, which is both a round number, about the 50 Day EMA, and the 23.6% Fibonacci retracement level. From there, we'll evaluate the price action and determine if it looks like Bitcoin is exhibiting activity supportive of a rally or if there's further downside. 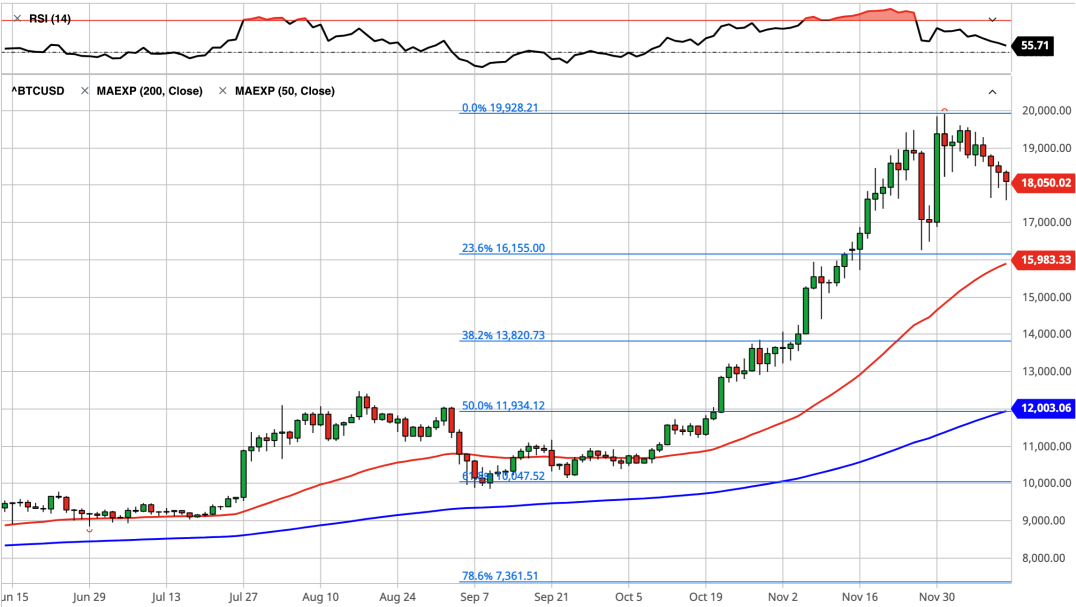 Not a ton to add as this is just our forecast playing out. As we get closer to a support level or dramatic price action happens, I'll advise further what's going on, but for now I'm just buying on dips.

Going forward, I think this is just a dip to buy. In the grand scheme of things, Bitcoin is going higher in 2021+. It only took a few years for the space to rapidly mature and institutions to start opening their wallets and investing eight and nine-figure dollars amounts into BTC, and now that they are, a $20K ATH doesn't seem too mountainous anymore. In fact, given the added price appreciation from trillions of dollars of federal QE, I think $100K is a little conservative over the next few years now. Only time will tell, but if Bitcoin mirrors any sort of rally it did this year with only morsels of Wall Street money and the first round of QE, imagine what it will do over the next few years with exponentially more institutional money and continued record-breaking QE.

Support: I'm looking for continuation on this short-term pullback, most likely retesting the $16,000 level as support. Below that, $15K and $13k - 14K should provide strong support levels for a powerful bounce higher to resume the uptrend. Bitcoin's in a defined uptrend; I'm not challenging that, nor selling Bitcoin; I'm looking to add value on pullbacks.