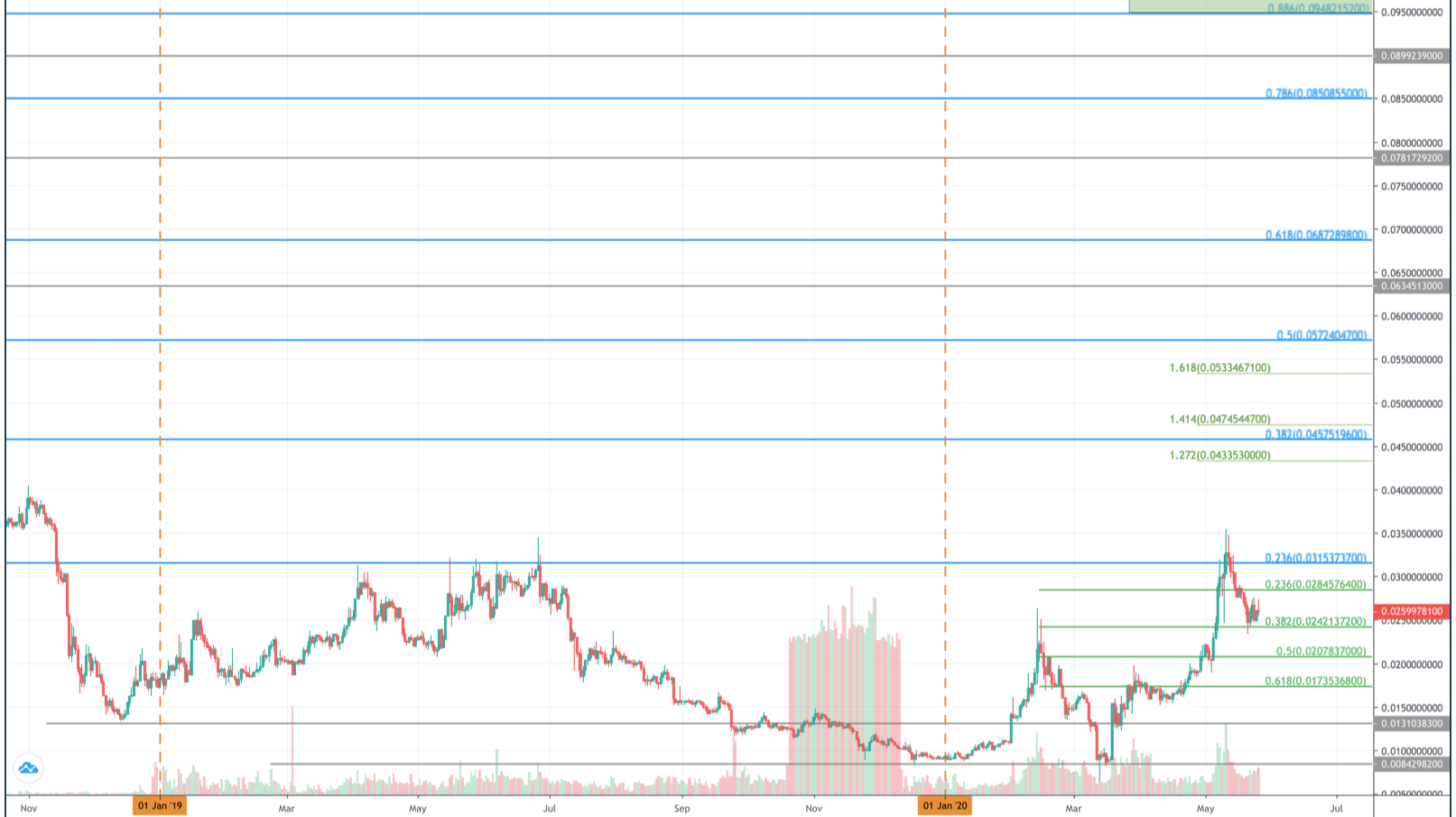 Today I would like to cover a fascinating mobile-based blockchain project that is designed to open up the gateway to Web3.0 and provide a secure and private way of sending messages to each other. Furthermore, this project has already erased all of the losses that were seen during the March market crash.

This project is called Status.

Firstly, let us take a look at the performance of Status (SNT) below from December 2018 until today: 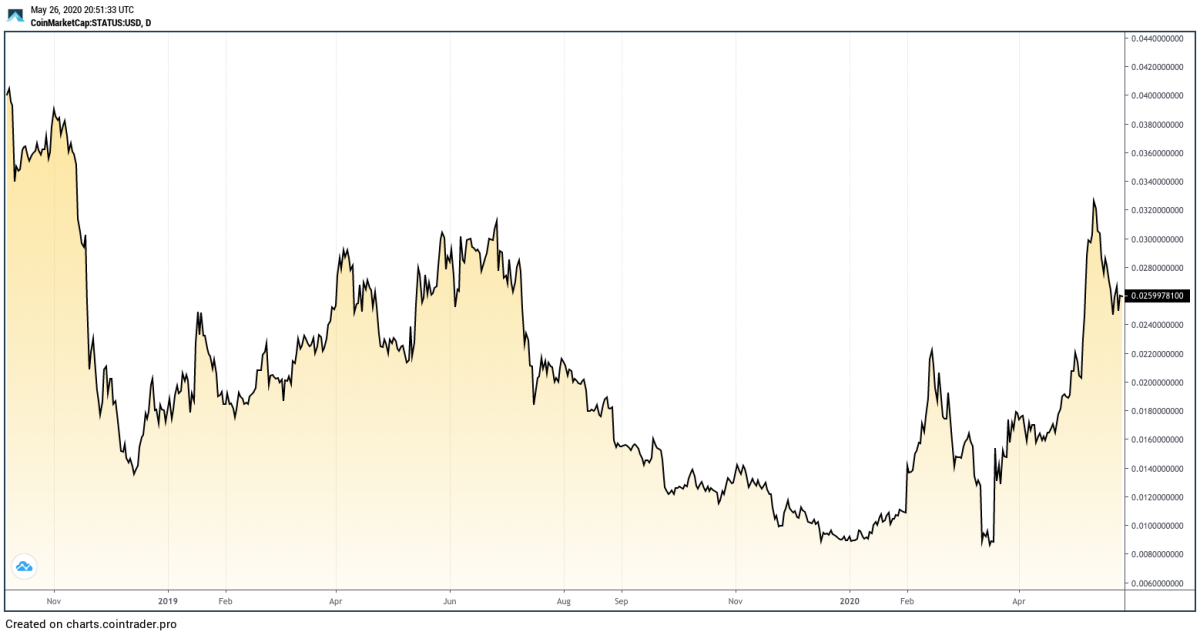 Looking at the chart above we can see that SNT witnessed a great first half to the year of 2019 after climbing by a total of around 80% to reach a high of $0.031. However, the cryptocurrency then went on to drop by a total of 71% throughout the second half of 2019 as it fell to close the year at a price of around $0.00.

This is where things got interesting for SNT.

Status continued higher from here over the following months. We can see that in April it went on to reach a high of around $0.022 and this bullish pressure continued through May as Status exploded by a total of around 61% in the month to reach a high of $0.33. The coin has since dropped slightly to trade at $0.026.

Status is a project that could actually help to drive mainstream adoption of cryptocurrency. In a world in which communications are constantly monitored and privacy is continuing to slip away, people are always looking for methods to maintain their privacy whilst using the internet.

An example of a great privacy-preserving cryptocurrency project is Brave (Basic Attention Token (BAT)). Brave allows users to maintain their privacy by providing a browser that is privacy orientated by default as it blocks all 3rd party trackers and cookies as well as keeping outside advertisements away from its users.

Well, in my opinion, Status is in the same league as Brave but it has not quite reached this ‘status’ amongst the cryptocurrency community itself. This can be considered a good thing for us as investors as it allows us to get in on the action before everybody else does.

Status strives to provide private communication tools for the world in a decentralized and trustless manner. Any messages sent through Status never go through a centralized server like the messages you may send on WhatsApp and Telegram (more on this later). 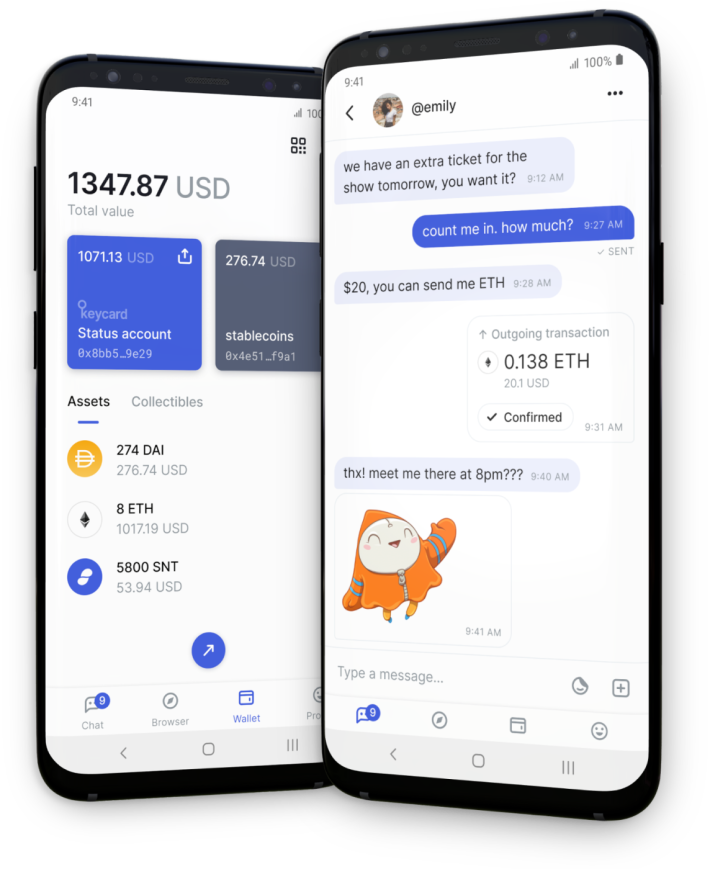 Furthermore, Status also comes with its own built-in Web3.0 browser that allows users to access and use the plethora of decentralized applications that are built on Ethereum - all though their own mobile devices!

You can start to see how Status could potentially be a huge driving force for the mainstream adoption of cryptocurrency. The fact that it provides secure, trustless, and private messaging is one thing but then adding a gateway to the entire Ethereum dApp catalog for your mobile phone is taking things one step further.

Oh, and I forgot to mention, Status also allows you to securely store your ERC-20 cryptocurrencies! What a multi-faceted project, eh?!

For the reasons stated above, and more discussed below, I believe that STN has the potential to surge by a total of 285% from the current trading price ($0.026) to reach my 2020 price prediction of $0.1.

In this article, I’ll firstly cover a range of topics that I believe will influence STN in reaching my $0.1 target during 2020 and then analyze STN on the daily chart to highlight some areas of resistance on the way toward the target.

What Is Status (SNT)?

In a nutshell, Status is a multi-purpose blockchain project for mobile users.

First and foremost, it is an open-source messaging platform that is mobile-based and allows users to securely send messages to each other. The team at status have the ethos to provide a secure communication tool aimed to uphold human rights to help in the fight to preserve privacy.

Additionally, Status is also a cryptocurrency wallet that allows users to store ERC 20 tokens and a web3.0 browser that acts as a dApp interface that acts as a network node to access dapps on ETH.

You can see how it is a multi-purpose project. The Status application can be downloaded from both the iOS and Google Play stores today. This shows the dedication of the Status team as they have delivered a working product whilst the majority of other cryptocurrency projects are still in the sage of their whitepaper 'promises'.

The entire purpose of this project is to provide a secure and complete gateway into the Web3.0 and allow users to start accessing the decentralized ecosystem that is created by the 1000s of decentralized applications that are released on the Ethereum blockchain.

It was introduced to the world in 2016 when the founders, Carls Bennetts and Jarrad Hope, gave a presentation on their new secure messaging platform and Web 3.0 browser at DevCon2. They then went on to raise a total of $99 million in the June 2017 ICO.

You can pretty much think of Status as a kind of WhatsApp-like application with its own Google Play Store built inside it. The difference is that Status is completely private and secure and is run on top of blockchain technology.

SNT, the cryptocurrency token for Status, is needed for voting on governmental proposals and for reserving things such as a user name and navigating the dApp store.

To find out about the Status application itself in more detail, take a look into this great write up.

Status has been in the beta stage for over a year now as the team continued to focus on developing and improving the features of their project.

Well, in February 2020, the team officially announced the release of Status Version 1.0 that comes with all of the features from the beta version with additional utility features such as the decentralized dApp directory and a sticker market place!

Let us look at the 3-major components of the Status platform itself; 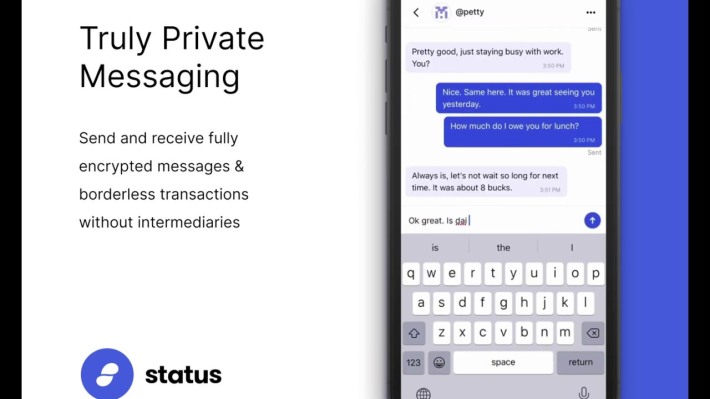 The messenger is a peer-to-peer privacy-focused messenger that uses the Whisper protocol, end-to-end encryption, and the Double Ratchet algorithm to make it secure. The Whisper protocol is what provides privacy-preserving routing and messaging on top of the devP2P wire protocol.

The security of how the messages are sent and stored is pretty elaborate. It is important to know that it is entirely peer-to-peer. This means that it never goes through a central server like the messages that you send on WhatsApp or Telegram. Sure enough, the messages sent on popular platforms are end-to-end encrypted, but they pass through a centralized server which is where there is a weak link within the chain. 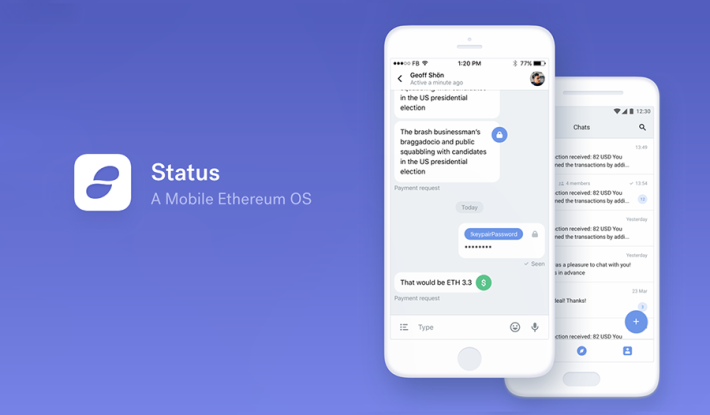 The Status messenger does not utilize a server. Instead, it uses something called a Mailserver which is just basically another node in the Status network that routes and stores messages for up to 30-days.

Status messages also utilize dark routing that means messages cannot be tracked or inspected and do not leak any metadata.

To find out more about how this all works and get into the nitty-gritty of the privacy and security mechanisms, I recommend you take a look into this article.

The Status messenger has all of the features you would expect from a messaging application such as private chats and group chats. 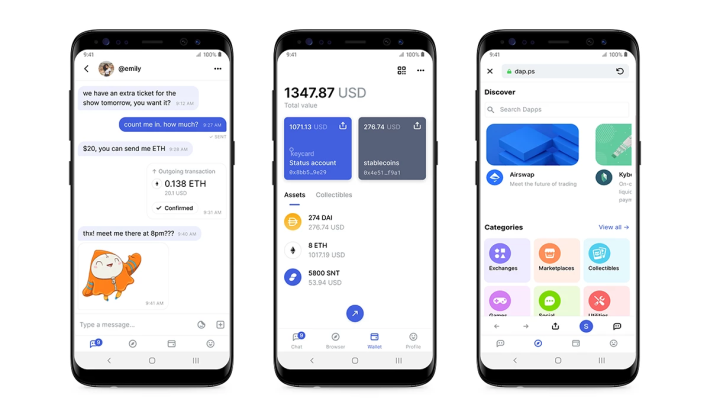 It also allows users to send each other cryptocurrency payments directly within chats.

The dApp store is accessed through the Web3 browser that allows the user to access the entire Ethereum dApp ecosystem straight from their smartphones. Users can access DEX’s, marketplaces, games, social networks and anything that has been created as a dApp on top of Ethereum. 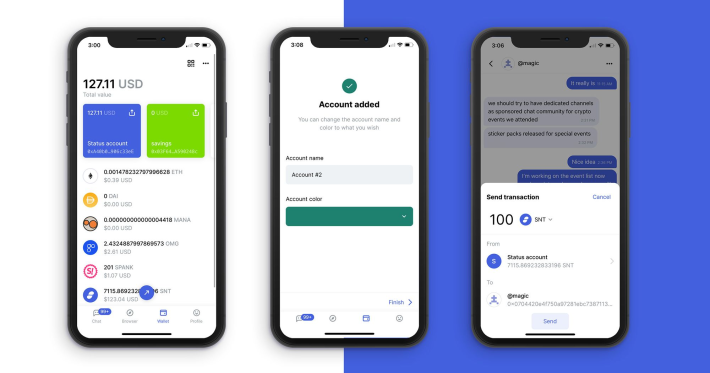 The Status application also comes with its own secure cryptocurrency wallet that allows users to hold any ERC-20 token. It also supports ERC-721 tokens which are designed for collectible tokens and non-fungible tokens (NFTs).

The wallet is non-custodial and private keys are encrypted and stored on the user’s own device without the need to use a central server. This means that your money is under your control and can never be accessed by anybody without the private key.

Once your private key is generated, the BIP44 key is saved in a Keystore JSON file locally on your device which is encrypted and saved by a password. Furthermore, it is only accessible by the Status app itself.

To find out more about the crypto wallet itself, take a look at this article. 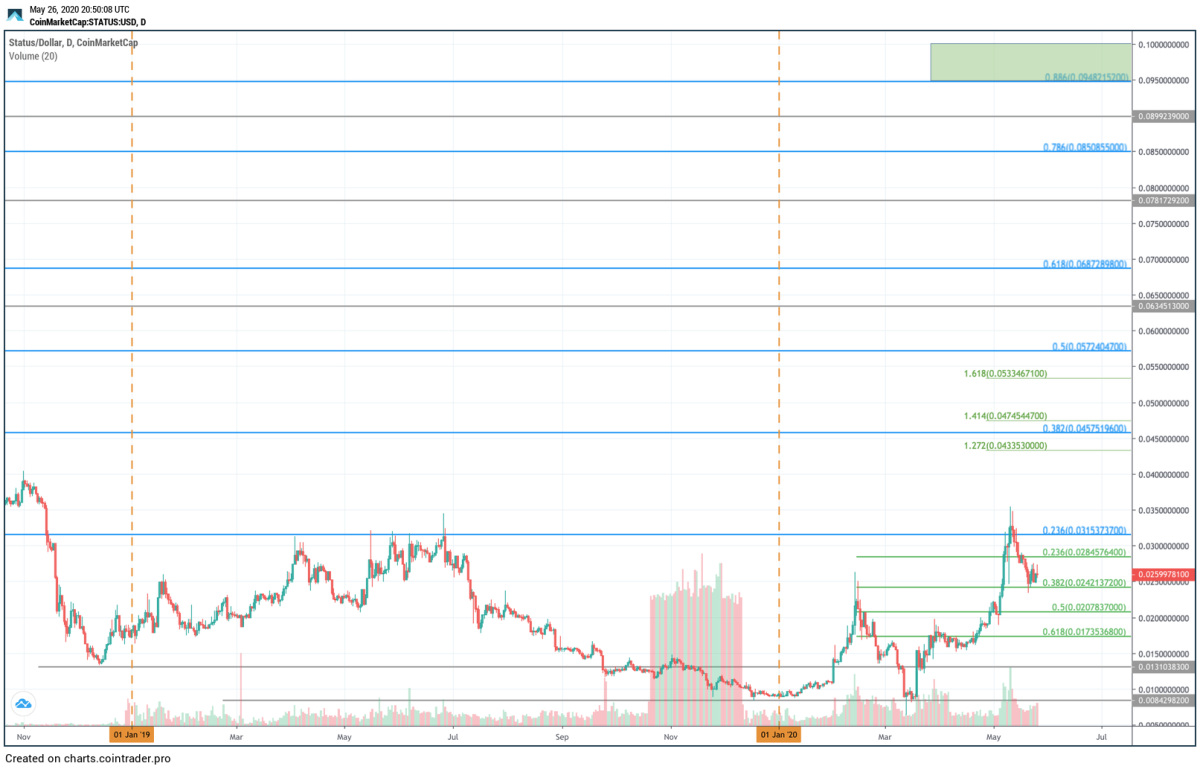 Taking a look at the chart above, we can see the residue of the pretty nasty decline seen in 2018 - however, this is apparent for every cryptocurrency on the market. During the first half of 2019 we can see the slow grind higher for SNT as it makes its way up toward the yearly high of around $0.033.

During 2020, SNT started the new decade off on the bullish footing as it reached as high as $0.026 before rolling over and dropping. During the March market capitulation, SNT went on to drops as low as $0.0085 but has since managed to rebound and regained any losses seen during this period.

As SNT has managed to rebound and reclaim all of the losses seen during the March market collapse, we can pretty much say that we are bullish. This was further confirmed by the fact that Status took out the $0.025 level to create fresh 2020 highs at around $0.030.

In conclusion, SNT certainly does have the potential to increase toward my 2020 price prediction, especially when we consider the fact that Vitalik Buterin himself is beginning to recognize the impact that Status will have on the entire Ethereum ecosystem as a whole.

The fact that Status provides a gateway into the entire decentralized application ecosystem on your mobile phone is not to be taken lightly - and this is probably the main reason as to why Vitalik has been singing his praises about the project.

Additionally, in an age in which privacy is slowly being degraded, users will continue to look for privacy-preserving protocols and Status certainly has the potential to be one of the outstanding projects that can provide this. Even Elon Musk himself is extremely concerned about privacy in this day and age; 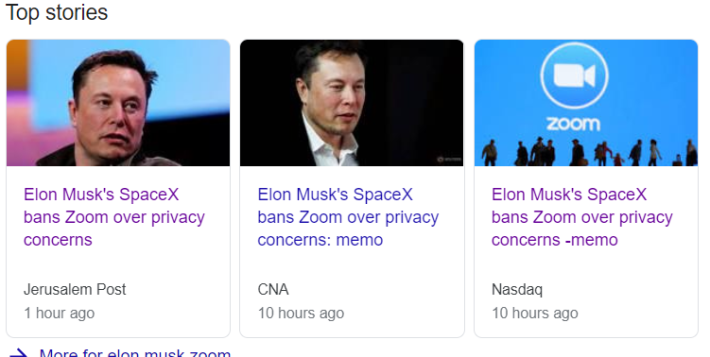 Given all that, my long term prediction is bullish, and if we hit the targeted price increase of 285% we can see the price $0.1.