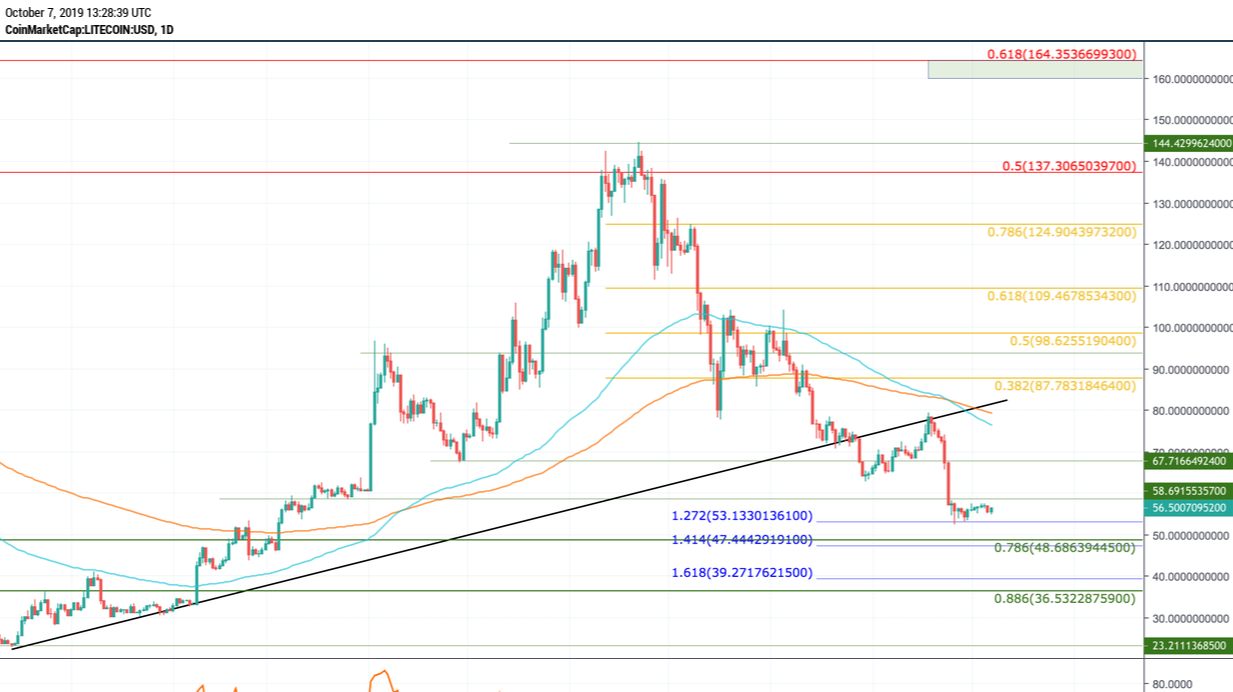 Litecoin has seen a rollercoaster of a year thus far (as of 07/10/19), after the cryptocurrency managed to surge by a total of 345% from the yearly open to the 2019 high - a move which had seen Litecoin rise as high as $146 during June 2019. This phenomenal 2019 price surge was largely attributed to the demand generated in the run-up toward the LTC Block Halving. However, since reaching the 2019 high, Litecoin has rolled over to fall by over 60% to reach the early-October trading price of $57.

Although Litecoin has fallen a steep 60% from the 2019 high, I still believe there is a strong potential for Litecoin to turn things around and begin to climb toward the $160 level at some point during 2020. For Litecoin to reach the $160 level, it would need to increase by a total of 181% from today’s price.

Litecoin truly does have the potential to turn things around during 2020, especially if they manage to incorporate the privacy features that they are planning to integrate. Furthermore, with the increased attention the coin is garnering via partnerships, this will certainly help the cause for Litecoin to rise to new heights in 2020.

In this article, I’ll firstly cover a range of topics that I believe will influence Litecoin in reaching my $160 target during 2020 and then analyze LTC on the long term daily charts to highlight some areas of resistance on the way toward the target.

Toward the tail end of 2018, Litecoin officially became the first-ever cryptocurrency sponsor at a UFC event. The event was UFC 232, a highly anticipated light heavyweight world title championship rematch between Jon Jones and Daniel Cormier in California. This was, in fact, the biggest fight of 2018 as the bad blood continued to develop between the two fighters creating an epic end-of-year showdown between the two veterans.

The Litecoin Foundation had announced their partnership a few days before the event was scheduled to go live. At the time, this was hard to believe considering the fact that the UFC was a huge organization that had previously sold for $4 billion. However, all doubts were put to rest as soon as the legendary voice of the Octagon, Bruce Buffer, roared to the arena “Take control of your money and pay with Litecoin!”. It was a seminal moment for cryptocurrency as Litecoin entered a mainstream avenue of marketing. Check out the moment below;

This is an extremely important milestone for Litecoin as it had the opportunity to sit next to huge brands such as Metro PCS and Monster;

The response from this marketing strategy was nothing short of incredible. Between December 26, 2018, and January 4, 2019, the search term “Litecoin UFC” had generated over 40 million impressions around the world - an incredible achievement. Furthermore, the search had reached over 16 million unique users!

When the Litecoin Foundation had announced the partnership many were suggesting that this was squandered money. However, in hindsight, the figures speak for themselves and this shows that these types of high-level advertising partnerships really do create brand awareness to a mainstream audience type. 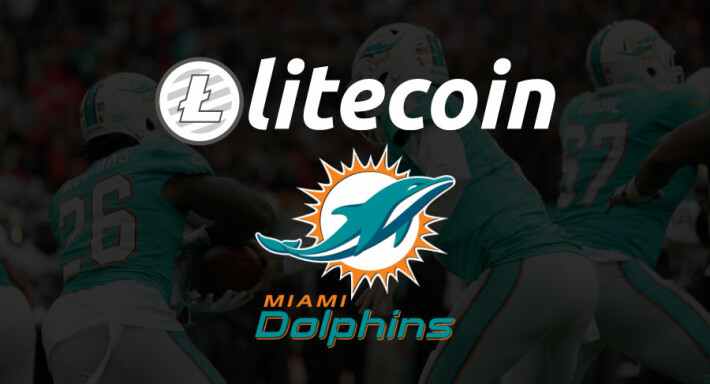 Litecoin is now officially the cryptocurrency partner of the Miami Dolphins. The announcement was made during July this year and has already been launched for the 2019 NFL season. The partnership will now bring LTC adoption to the NFL fanbase as users will now be able to pay for the Dolphin’s 50/50 raffle ticket draw at their home games with Litecoin. The 50/50 raffle is the Miami Dolphins official raffle draw in which 50% of the revenue goes straight to charity.

The partnership includes Aliant Payments to bring the payment service that will allow users to buy the raffle tickets online or at one of the 14 kiosks scattered around the Miami Dolphins Hard Rock stadium. Along with Litecoin, users can also pay for tickets in BTC. Charlie Lee, the founder of Litecoin, had the following to say about the partnership;

“This collaboration propels Litecoin in front of an audience of millions of people around the world at a time where adoption of cryptocurrencies continues to gain momentum and the ecosystem is able to support real-world use cases in ways previously not possible. We see this as a powerful way to raise awareness and educate people about Litecoin and cryptocurrencies on a tremendous scale.”

Development progress has been a hotly debated topic within the Litecoin community. There had been some fear, uncertainty, and doubt spreading during regarding the development of Litecoin when an internal chat between the Litecoin team was leaked on Reddit. The leaked chat included Charlie Lee and Franklyn Richards, the Litecoin Foundation Director, discussing the stagnation of Litecoin development. Litecoin holders were shocked to read the following statement from Richards;

“I was extremely disappointed to discover that no progress had been made on CT (confidential transactions) since the announcement, especially when I stand on stage telling everyone it’s happening and we are actively working on it.”

Charlie Lee came back to respond with a 16 part Twitter RANT explaining a host of reasons as to why the GitHub for Litecoin development may seem a little on the “light side” this year;

One of the main reasons stated was due to the fact that Litecoin releases often lag behind Bitcoin releases by a few months. Litecoin always implements any upgrades that Bitcoin Core implement, however, there is a lag period between the implementation time. Furthermore, GitHub structures its commits in a way that the original “committer” always claims the credit to the commit. In this case, the original commit is made by a BTC developer and, therefore, they receive the committed credit. Most importantly, the date remains the same as the original commit date - leading to the Litecoin GitHub to having little commits during 2019 as they are dated back to 2018. This is the reason why many people believe that the developers seem to be “taking time off” in Litecoin development.

Taking his argument further, Charlie Lee continued to state that during the past year he believed that adoption and awareness were more important than development. When we consider the number of impressions the UFC partnership generated, he could be right! However, Lee went on to state that he believes they are both as equally as important as each other over the long run.

For a more detailed rebuttal about the apparent lack of development for Litecoin take a look at this response from the Litecoin Foundation.

This lack of development is shown by data from Santiment which suggests that Litecoin development has flat-lined to zero! This may be slightly worrying for any Litecoin holders, however, the cryptocurrency is pretty much already established to a very thorough level and would not need too much development input until they decide to evolve Litecoin.

Bringing Fungibility and Privacy To Litecoin With Confidential Transactions

The intended implementation of Confidential Transactions was announced in January 2019 when Charlie Lee tweeted the following;

The move to add Confidential Transactions is to make Litecoin more fungible and private. The fungibility of an asset basically means that the asset can be interchanged with other assets of the same type on a one-to-one basis. However, in cryptocurrency, a coin may become “tainted” if it has been used in any illicit activity - reducing the fungibility. Confidential Transactions, developed by BTC Core developer Gregory Maxwell, helps to obfuscate both the sender and receivers addresses in the help to remain private. It is the obfuscated transactions that result in greater fungibility as the inputs and output values are encrypted. 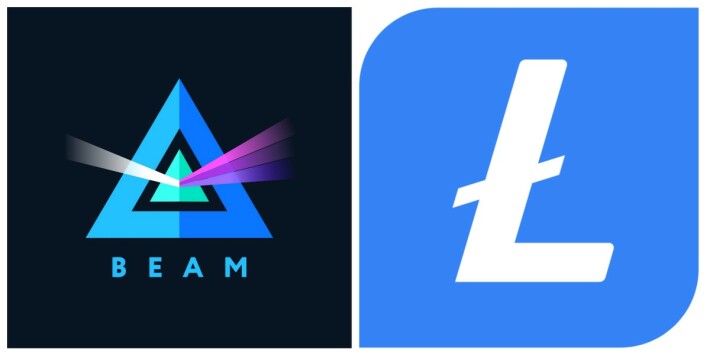 The Litecoin Foundation and Beam, creators of MimbleWimble, had announced their cooperation in Feb 2017. Things had been pretty quiet about the development since the announcement, however, during August 2019 Lee presented some updates on progress when he stated that the Grin++ lead developer, David Burkett, is working on the design to implement MimbleWimble into Litecoin. 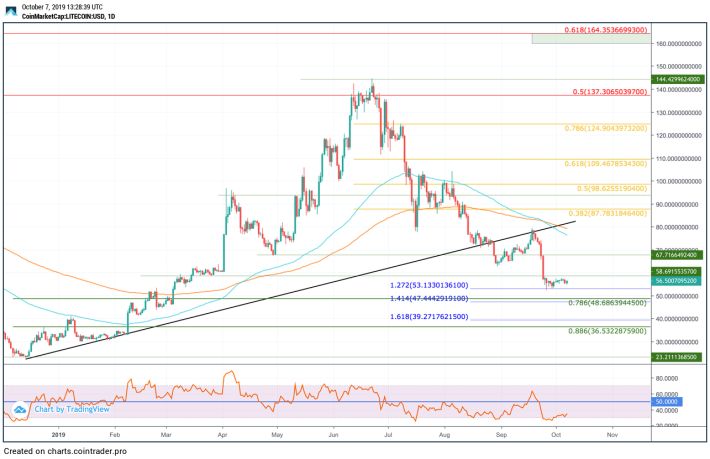 Looking at the long term daily chart above, we can clearly see the 346% price increase that was seen during the first half of the year with Litecoin rising toward the $144 level. After reaching this level, Litecoin was met with resistance provided by a long term bearish .5 Fibonacci Retracement level, causing the cryptocurrency to roll-over and reverse.

Litecoin went on to fall considerably over the next few months, dropping beneath both the 100-days EMA and 200-days EMA, and eventually dropping beneath the long term rising support trend line. The cryptocurrency has recently met support at a downside 1.272 Fibonacci Extension level priced at $53.13.

The RSI has recently rebounded from extreme oversold conditions which could suggest that we may have suffered the worst of this present downturn. However, there is still space to head lower if Bitcoin continues to head further lower beneath $8,000. For this market to be considered bullish, we would need to see price action rise above $80 and break above the resistance at the 200-days EMA.

If the selling continues in the short term and Litecoin falls beneath the support at $53.13, we can expect immediate support to be located at $50, $48, and $47.44 (downside 1.414 Fibonacci Extension level). Beneath this, support can be found at $45, $39.27 (downside 1.618 Fibonacci Extension level), and $36.53 (.886 Fibonacci Retracement level). I do not expect Litecoin to head this low, but if it does, this support should prevent the market from heading further lower.

Litecoin certainly has the potential to rise by a total of 181% from the current price and reach the target price of $160 at some point during 2020. I believe that the main driving forces behind this prediction will largely be based upon a combination of major partnerships and further development.

Litecoin has created some great partnerships with major sports franchises that help to present Litecoin to the mainstream audience. If they can continue to partner with these high-value sports franchises it wel help to drive adoption. Furthermore, Litecoin development continues behind the scenes (even if it doesn’t look like it on GitHub). Once the team implements Confidential Transactions via MimbleWimble, they will introduce fungibility and privacy to Litecoin.