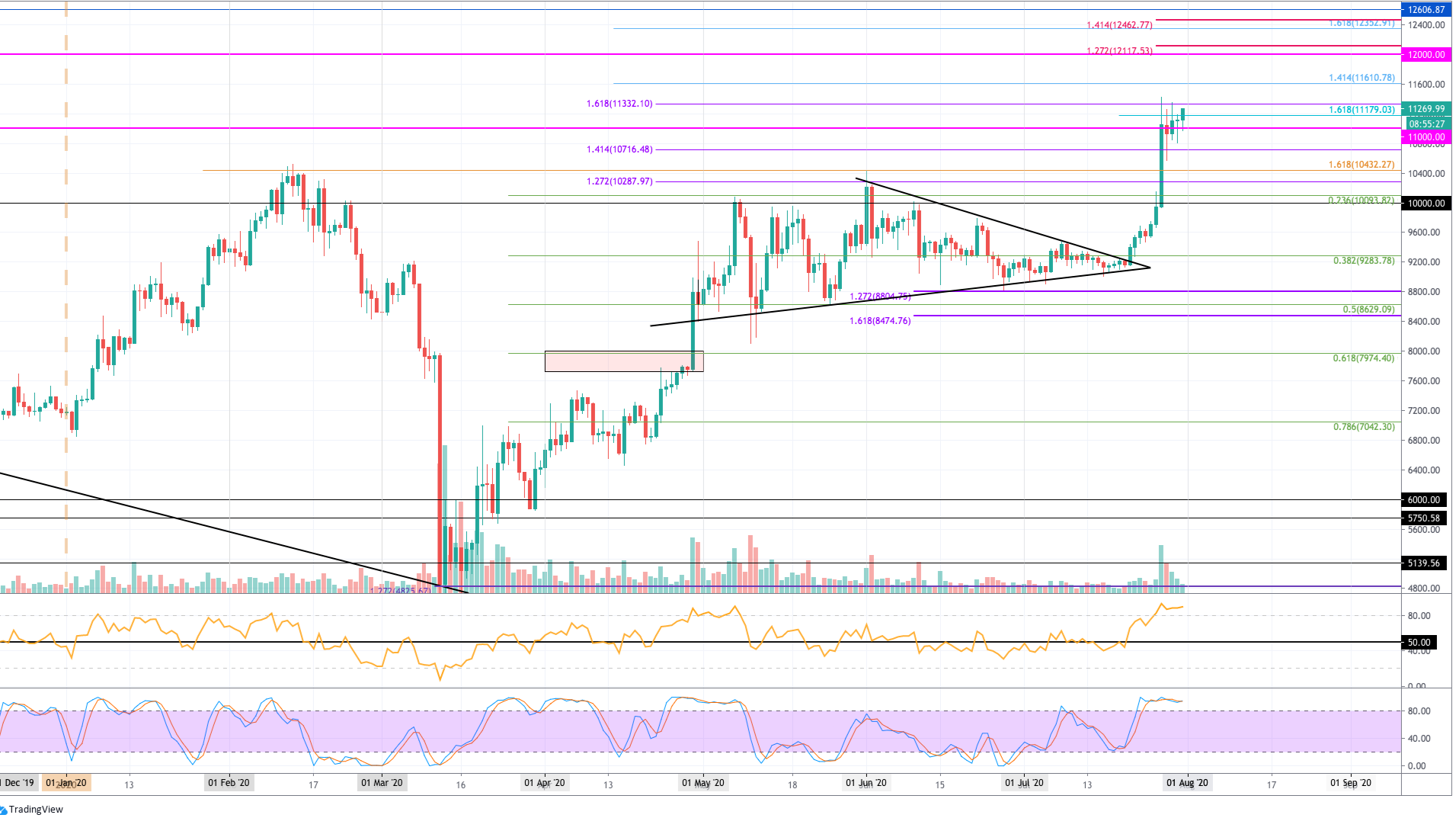 BTC, ETH & BNB - Where Are The Next Bullish Stops?

The price for Bitcoin has exploded in July 2020 as the cryptocurrency managed to surge by around 22.60% to reach the current trading price of around $11,200. This has been an extraordinary month for Bitcoin as we finally saw the cryptocurrency breaking out from a 2-month long consolidation phase and turn back to a bullish trading condition.

In fact, July’s price increase has now allowed Bitcoin to push into a fresh 11-month high price and this is could actually be the best performing July in 8-years;

It seems that the surge has also started to wake up the Bitcoin whales. According to data from Glassnode, apparently the recent price increase has not been accompanied by whales selling off their holdings. In fact, quite the opposite is true. The following chart shows the “Bitcoin Hodler Net Position Change” and it shows that the metric has remained positive since the end of March as Bitcoin hodlers accumulate more than 50,000 BTC per month. 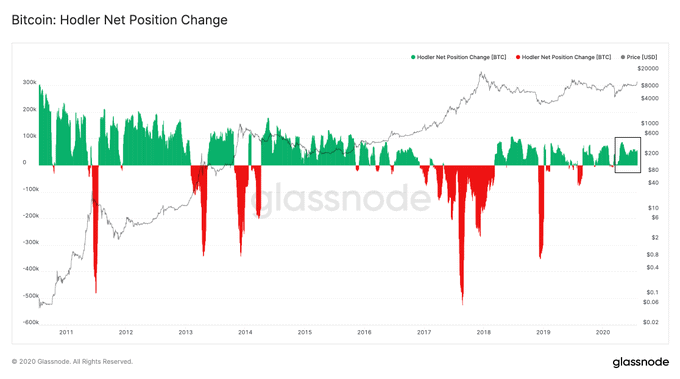 Another interesting statistic to quickly run by you is the fact that the CME Bitcoin Futures open interest level has shot up which has caused the premiums required to roll over contracts into August to surge to over $180; 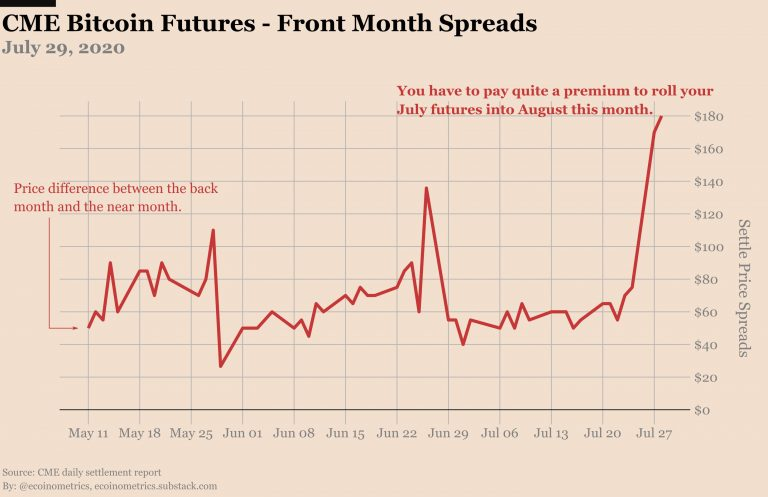 This means that traders that wish to keep their futures position open in August will have to pay a much higher premium than in the previous month. Although this might be true, it is unlikely that this will cause a mass closing on futures contracts when we consider that Bitcoin would have provided quite a substantial profit for these open futures trades already.

Despite the bullishness in the market, there are some indicators that suggest the market may be about to experience a little pullback. One of these such indicators is the Crypto Fear and Greed Index which shows that it has reached a fresh peak in July; 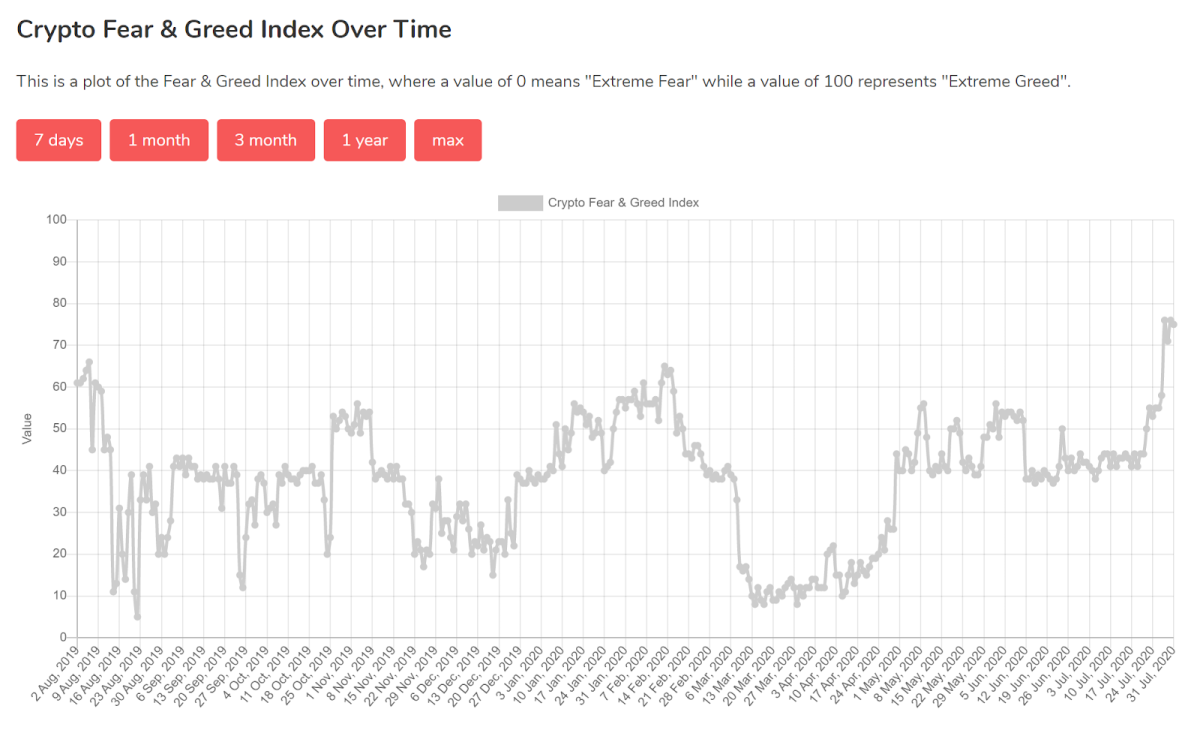 Fear and Greed Index From Alternative.me

Each time this index reaches a peak, it is accompanied by a correction within the markets. For example, we can see that there was a peak during mid-Feb 2020 when Bitcoin reached as high as $10,430. From thee, Bitcoin went on to drop as low as $5,200 through March 2020.

Whilst Bitcoin has been on a significant rampage, Ethereum has also seen a stronger burst of excitement as it manages to increase by a total of 53% this month. The coin was trading within an ascending triangle pattern for the past 2-months with the roof of the triangle at $250. Ethereum managed to break this resistance over the past fortnight which saw the coin reaching as high as $347 today.

There have been two clear driving forces that have caused Ethereum to explode during July. The first, and most prominent, catalyst for the surge this month is the extraordinary rise of DeFi. The DeFi industry has exploded this month and managed to reach as high as $4 billion in USD value locked within DeFi smart contracts;

It all started at the beginning of July when the Compound Finance platform decided to distribute its governance token $COMP to users of the platform. This caused a serious frenzy amongst the DeFi industry as users started to flock towards these platforms to deposit their money in the hopes to gain a profit.

In fact, this rise in DeFi is actually attracting Bitcoin to enter the Ethereum network itself - drawing liquidity from the number 1 ranked cryptocurrency. You see, the entire DeFi industry is built off of Ethereum blockchain and to interact with DeFi dApps, the cryptocurrency will need to be ERC-20 compliant.

Interestingly, because Ethereum was created before the ERC-20 standard - it is not ERC-20 compliant. This means that to use ETH in the DeFi network, it needs to be converted into an ERC-20 token. This is handled through a process known as ‘wrapping’ in which 1 ETH is deposited into a smart contract and 1 “wrapped” ETH (WETH) is provided to use as an ERC-20 token in DeFi.

This exact same principle applies to Bitcoin. Bitcoin is not an ERC-20 compliant token and, therefore, users have to wrap their BTC into wBTC to use them in DeFi dApps. Well, with the significant surge in DeFi it seems that BTC is flowing into the ETH network through WBTC.  In fact, there are over 20,000 BTC that are locked into the Ethereum network which equates to almost $227 million;

BTC on ETH from https://btconethereum.com/

This is quite extraordinary and equates to around 0.1% of the total BTC supply. If this type of exponential growth continues, we can expect the total percentage of BTC on ETH to rise to around 1% by the end of the year.

The second reason as to why Ethereum has been flying as of recently is the much-anticipated upgrade for Ethereum to ETH 2.0. This upgrade will shift the consensus mechanism from PoW to PoS - eliminating all miners from the network. As a result, the network should become more stable, reliable, and faster. It should enable a higher throughput for the network and allow for more than the current 25 transactions per second to be processed on the Ethereum blockchain.

ETH 2.0 will be hitting the testnet soon and should be launched by November 2020.

Right, let us get into the analysis! 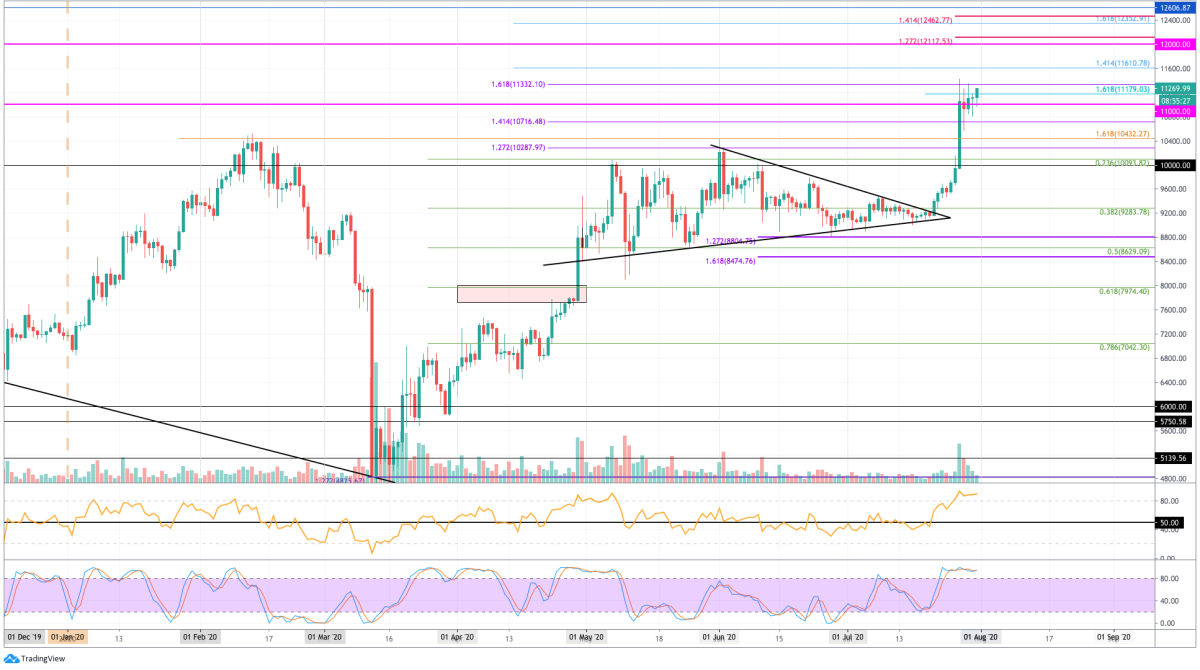 Taking a look at the daily chart above, we can clearly see how Bitcoin was trapped within a phase of consolidation over the past 2 months of trading. It was trading within the confines of a symmetrical triangle pattern as the coin moved sideways for the majority of this period.

This past fortnight, we can see that Bitcoin managed to push higher above this triangle as it started to maraud higher. It quickly reached the $10,000 level and went on to break above here as it created a fresh 2020 high price above $10,430 as it reached as high as $11,332.

We can see that Bitcoin continues to challenge this resistance level and we can expect it to be broken fairly soon.

Right now, we are most certainly bullish, especially when we consider the fact that we broke up from consolidation and created a fresh 2020 high. The coin would need to drop back beneath $10,000 before being in danger of turning neutral and further beneath $8,630 (.5 Fib Retracement) to turn bearish. 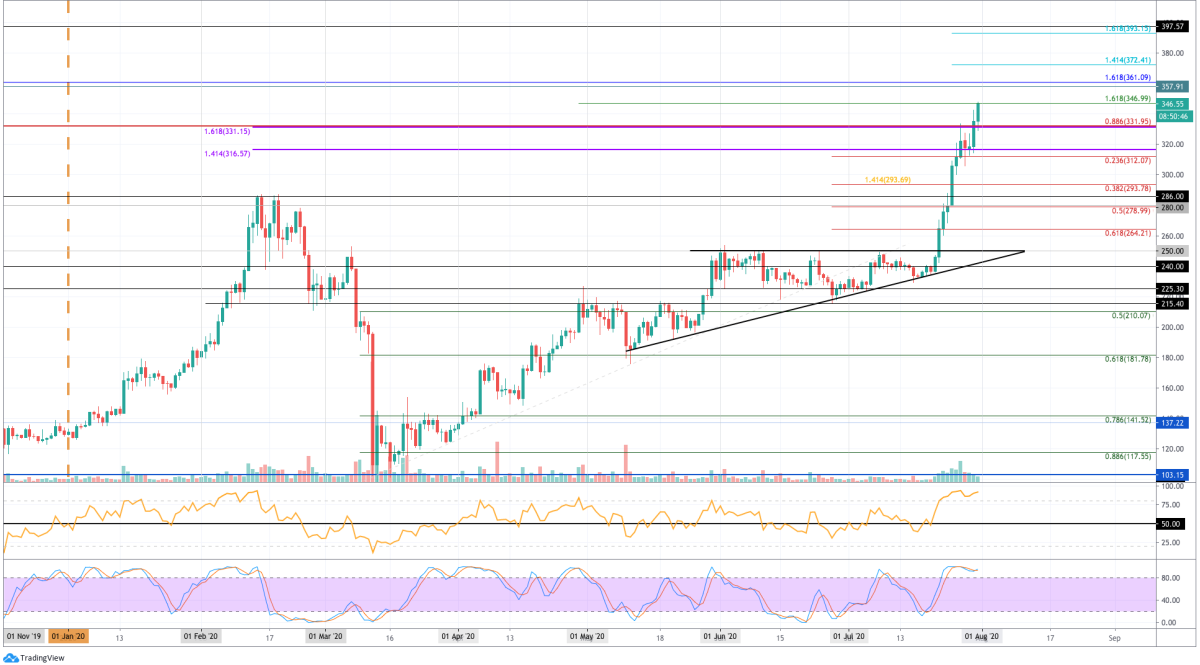 Taking a look at the daily chart above for Ethereum we can see that it has done very well to recover from as low as $120 in March 2020. Through June and July, the coin was trapped in a phase of consolidation as it struggled to break above the $250 level.

ETH managed to break above this resistance over the past fortnight as it pushed much further higher above the 2020 high at $286. It went on to break above $300 and reached the resistance at $332 (bearish .886 Fib Retracement). This aforementioned resistance was broken today as ETH pushed higher yet to reach the $347 level (1.618 Fib Extension).

Likewise, the break above the triangle has pushed ETH into a bullish trend right now. The coin would have to drop beneath $286 to turn neutral and further beneath the support at $250 before being in danger of turning bearish in the short term. 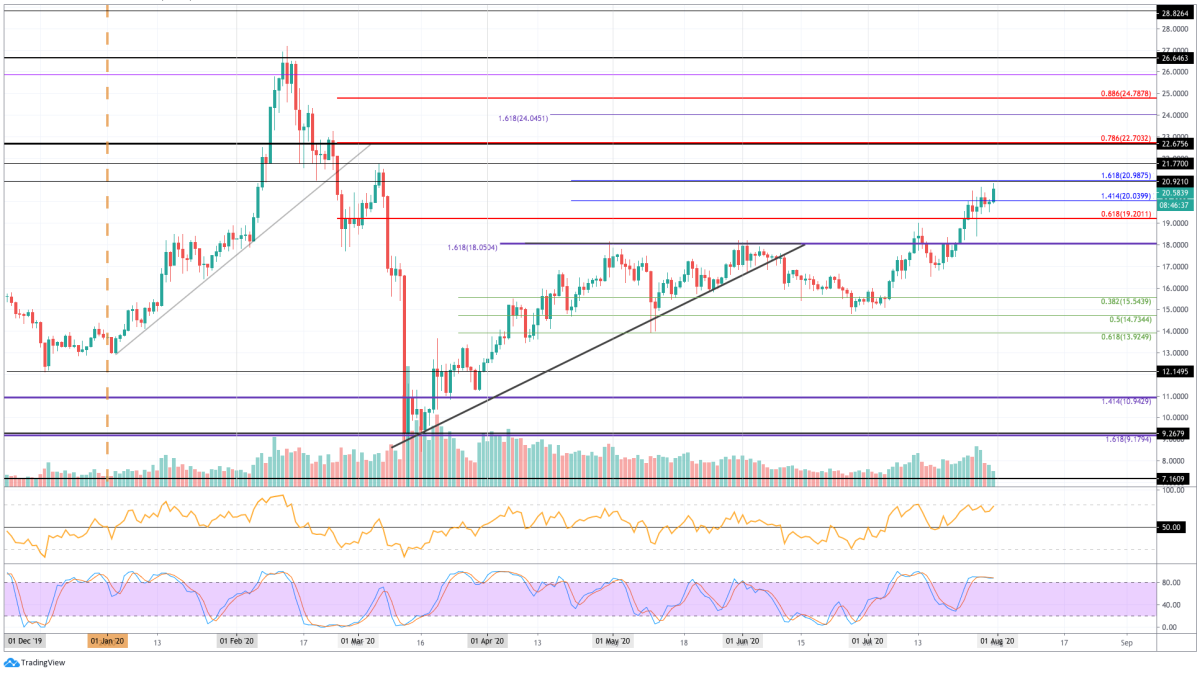 Binance Coin has also been surging during July as it managed to increase by a total of around 33.5% throughout the month. The coin had dropped as low as $10 during the March market collapse as it started to recover slowly. By April the coin had reached $18, however, it struggled greatly to overcome this level of resistance.

During April, May, and June, BNB was unable to overcome the strong resistance at $18. This had caused BNB to drop lower through June as it reached the support at $14.75 (.5 Fib Retracement). BNB would go on to rebound from here and eventually was able to break above $18 during the second half of July.

The break above $18 has shifted BNB into a bullish trend. The coin would have to drop back beneath $18 to turn neutral and then fall further beneath $15 to be in danger of turning bearish. 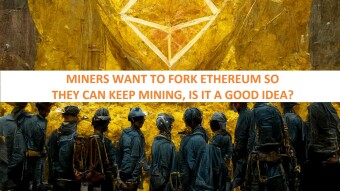 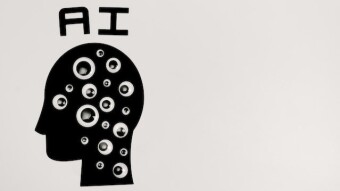