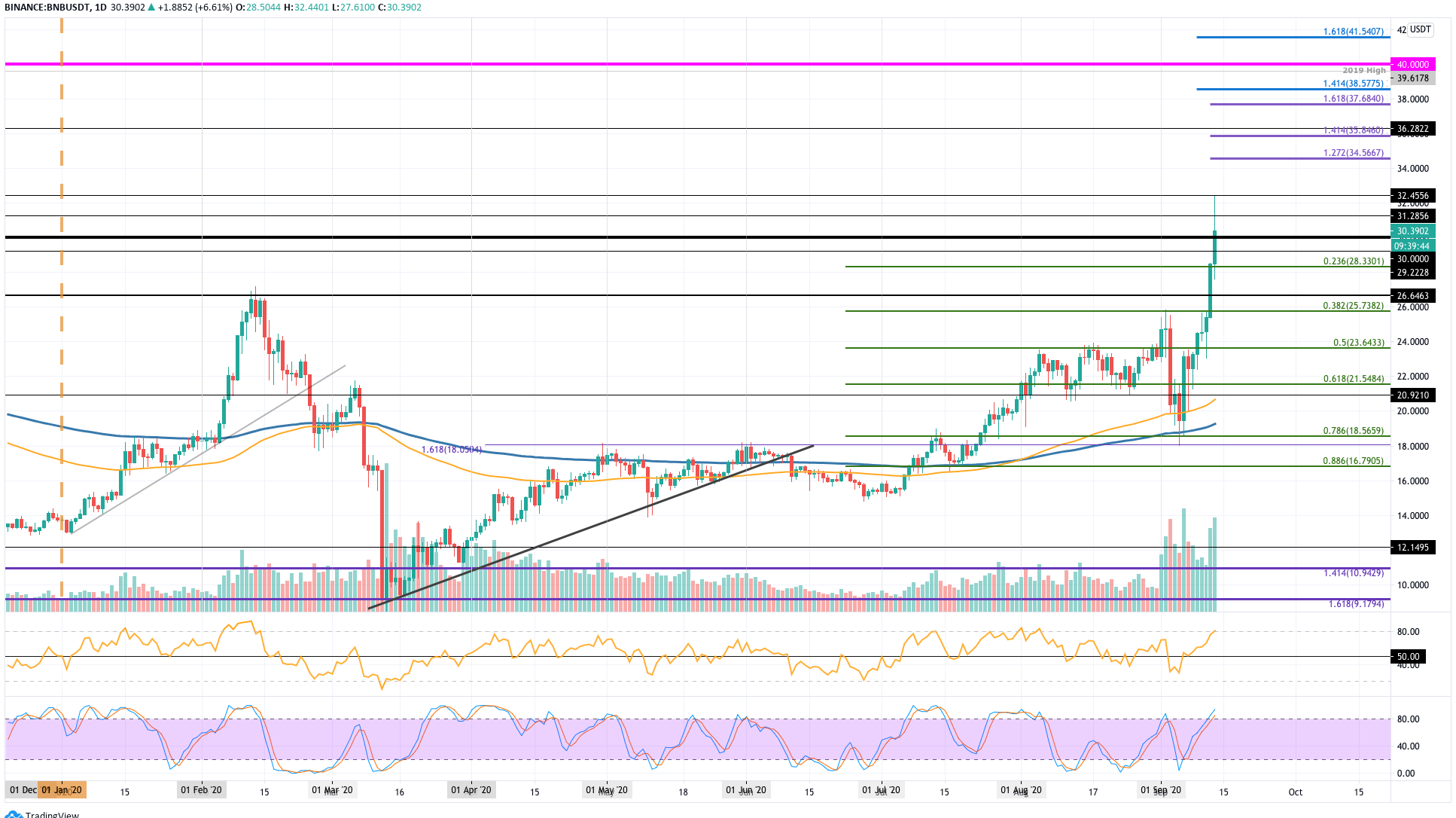 BNB, DOT, & LINK Price Analysis - Where Are We Going?

I’ve been relatively inactive with my analysis recently, so I decide to update some of the major altcoins out there - BNB, DOT, and LINK.

Binance Coin has been on an absolute rampage as of late and has managed to surge by a total of 55% over the past 7-days of trading. The coin has even set a fresh 2020 high at around $32.45 - but we will get to that in the price analysis below.

On the fundamental side of Binance Coin, the team over at Binance recently launched its smart chain - Binance Smart Chain. This allows Binance to tap into the DeFi economy as it brings features such as staking to BNB holders. For example, they have officially launched staking products that will enable BNB and BUSD holders to earn up to 60% APR for locking their tokens into the Binance Smart Chain.

What is interesting about this move into DeFi is that CZ, CEO of Binance, actually calls his smart chain part of the CeFi economy - not DeFi. As you know, DeFi stands for Decentralized Finance. Well, CZ has coined a new term known as Centralized Finance, and he prefers it to DeFi because he believes that when a reputable exchange verifies the project - it is more likely to be beneficial for all investors;

In addition to this, the latest price boost for BNB might be related to the fact that somebody built a Uniswap alternative on the Binance Smart Chain called Burgerswap.

The concept is very similar to Uniswap in that it allows users to quickly come and swap any token on the Binance Smart Chain.

Although he claims not to know who created it, I am pretty sure there must be some form of communication behind the scenes;

In addition to this, data from Santiment shows that whales are starting to load up on their holdings;

The chart above shows that, although small-holders (100-1000 coins - orange line) is dropping, wallets with 100,000-1 million (pink line) BNB is reaching all-time highs. This is an excellent signal for any BNB holders as whale confidence starts to grow.

Additional Santiment Data also shows that Daily Active Addresses on BNB has grown over the past few months and remains relatively high;

All of these fundamental factors combined have led to a fresh 14-month high in the price of Binance Coin. 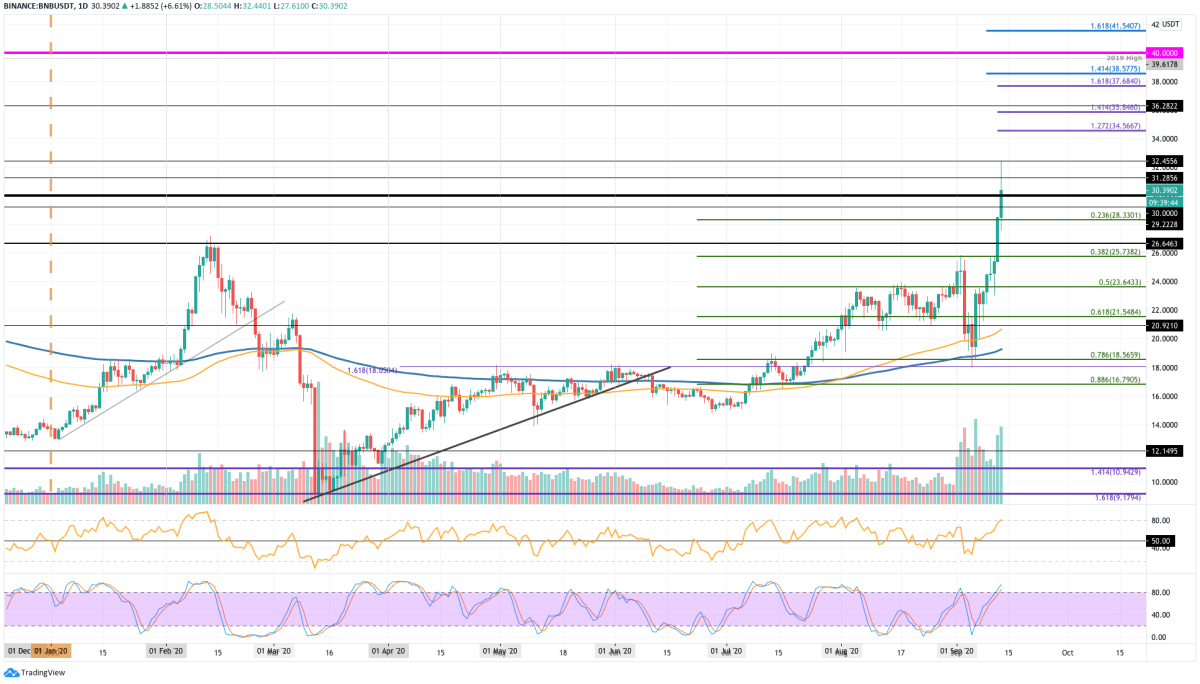 Looking at the chart above, we can see BNB creating a fresh 2020 high price today (September 13th) at the $32.45 level. The cryptocurrency had dropped into the $9.17 support during the March 2020 collapse caused by COVID-19.

From there, BNB started to grind higher slowly but struggled to break the resistance at the $18.05 until July 2020. In August, we can see that BNB continued to climb further higher as it managed to reach as high as $26.

The opening week of September saw Bitcoin dropping from $12,000 to $10,000. As a result, BNB also dropped lower into the support at $18. Luckily, the buyers quickly regrouped, which allowed them to start the 56% price increase this week. At the end of last week (September 11th), the bulls had already reached the August resistance at $26.

The market has since dropped lower to trade at around $30 - at the time of writing.

After setting a fresh 2020 high, we are bullish. The coin would need to fall back beneath $26 to turn neutral again and further beneath the $20 level before being in danger of turning bearish.

Polkadot has also seen quite an excellent period of trading this week, in which it managed to surge by a total of 24.5%. The cryptocurrency has barely been around on the market for a month and is already sitting amongst the top 10 ranked projects in the 6th position.

Post-launch, we can see how the developers are at their most active as they aim to improve their blockchain to make it a viable competition against Ethereum.

The main aim of this project is to facilitate interoperability and scalability between blockchains. They recently secured a partnership with the Trace Alliance, an essential milestone for the project as they share the same vision for creating a blockchain-agnostic internet. 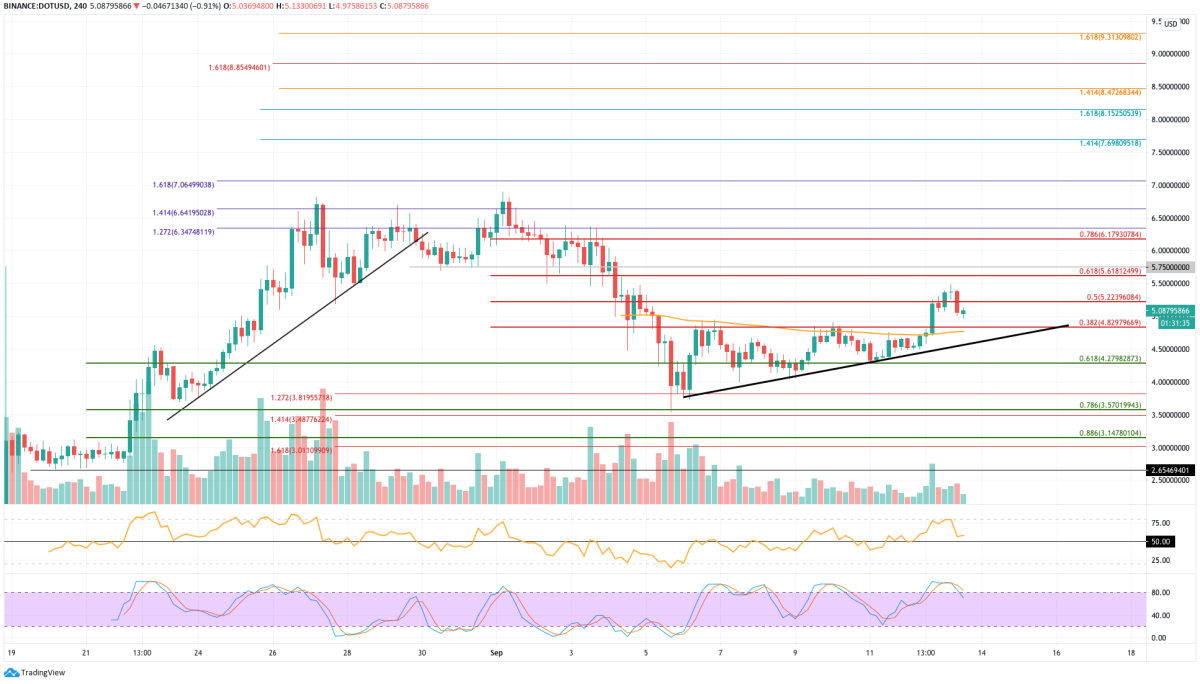 As DOT has not been around on the market for too long, there is not much data to analyze. However, we can still use technical analysis on what we do have on the 4HR charts to highlight some critical areas of support and resistance moving forward.

Looking at the 4HR chart above, we can see how DOT peaked out at the $7.00 level at the start of September. From there, it headed lower during the early-September price fall when BTC dropped from $12,000 to $10,000.

We can see that during this drop, DOT managed to find reliable support at $3.81 (Downside 1.272 Fib Extension). It rebounded from here, but it initially struggled to break above resistance at $4.82 (bearish .382 Fib Retracement). However, the bulls did find support at a short term rising trend line.

The buyers did manage to break this resistance this week as they hit the $5.50 level.

Although it has increased by 25% this week, we still have to consider the market as NEUTRAL right now. The coin would have to break beyond $6.50 to turn bullish again. It would have to fall beneath $3.81 to be in danger of turning bearish in the short term.

Chainlink might have increased by 14% this week, but the cryptocurrency is in a completely different boat to the others mentioned in this analysis. Chainlink went on an epic ride in August as it reached a height of around $20. From there, it has been in a constant decline as the apparent “bubble” pops. To be clear, I do not think Chainlink was in any sort of bubble, however, any asset that managed to surge by 355% in under 50-days would eventually have to turn around and retrace - and this is exactly what Chainlink is doing.

Before we get to the technical analysis, let us take a look at some fundamentals first.

One of the concerning fundamentals for Chainlink is the fact that the whales are capitulating. The following chart shows the holder distribution for Chainlink;

As you can see, the small scale holders (blue, orange, and yellow lines) are consistently increasing as small fish start to grow their bags. However, at the same time, the larger scale whales that own between 10,000 and 1 million LINK (green and light orange lines) have been consistently falling since June this year. This shows that the whales are looking to reduce their exposure to LINK during the recent price falls.

Additionally, it does look like the growth of the network is starting to fall as the Daily Active Addresses starts to decline;

Lastly, it does look like the buzz for Chainlink is dying out as the Social Volume for the cryptocurrency is also in a state of decline; 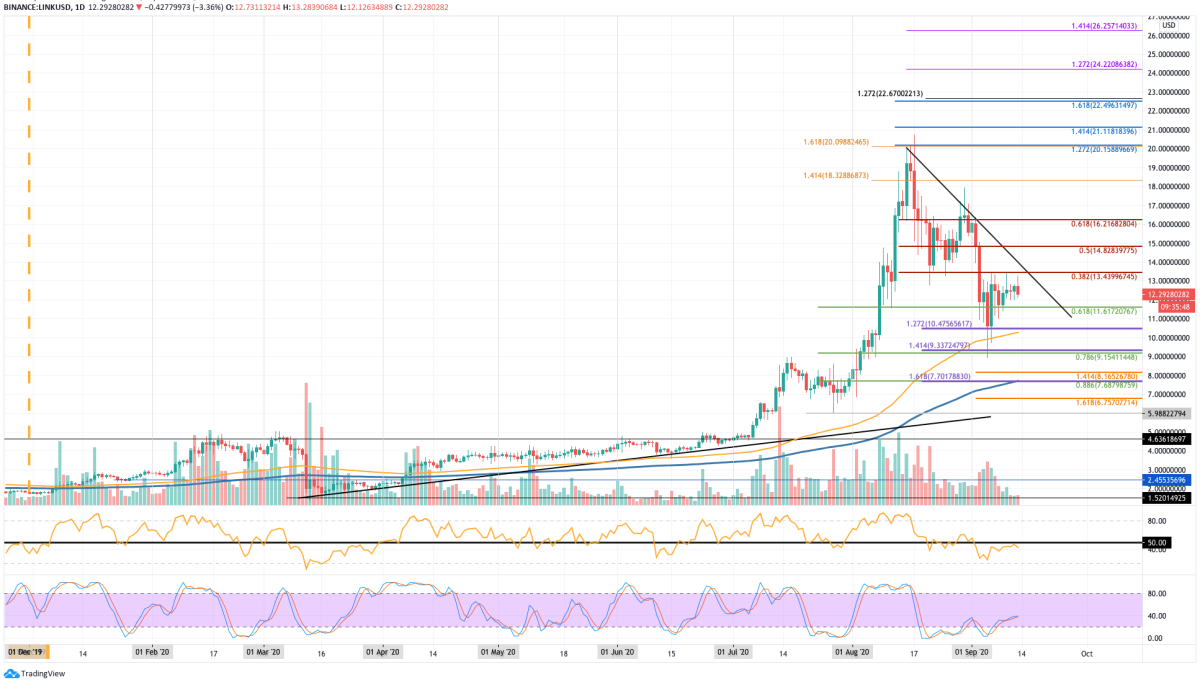 Looking at the daily chart, we can see that LINK has been relatively stagnant for most of the year. The coin was struggling to break the February highs at $4.65 until July 2020. It was not until August when the LINK boom began as the currency surged from $7.00 to reach as high as $20 during mid-August.

Unfortunately, the coin took a turn for the worst here and had been declining ever since.

We can see that, in the first week of September, Chainlink fell in tandem with Bitcoin as it spiked as low as $9.15 (.786 Fib Retracement). More specifically, the buyers managed to hold the support at $10.50 (downside 1.272 Fib Extension level) and allowed LINK to rebound from here.

The bulls have not been able to break the resistance at $13.43 (bearish .382 Fib Retracement) and would need to pass this to travel higher.

Right now, we are neutral. The coin would need to break above $17 before we can start to consider a sustainable bullish market, and it would have to drop back beneath $10 to turn bearish in the short term.