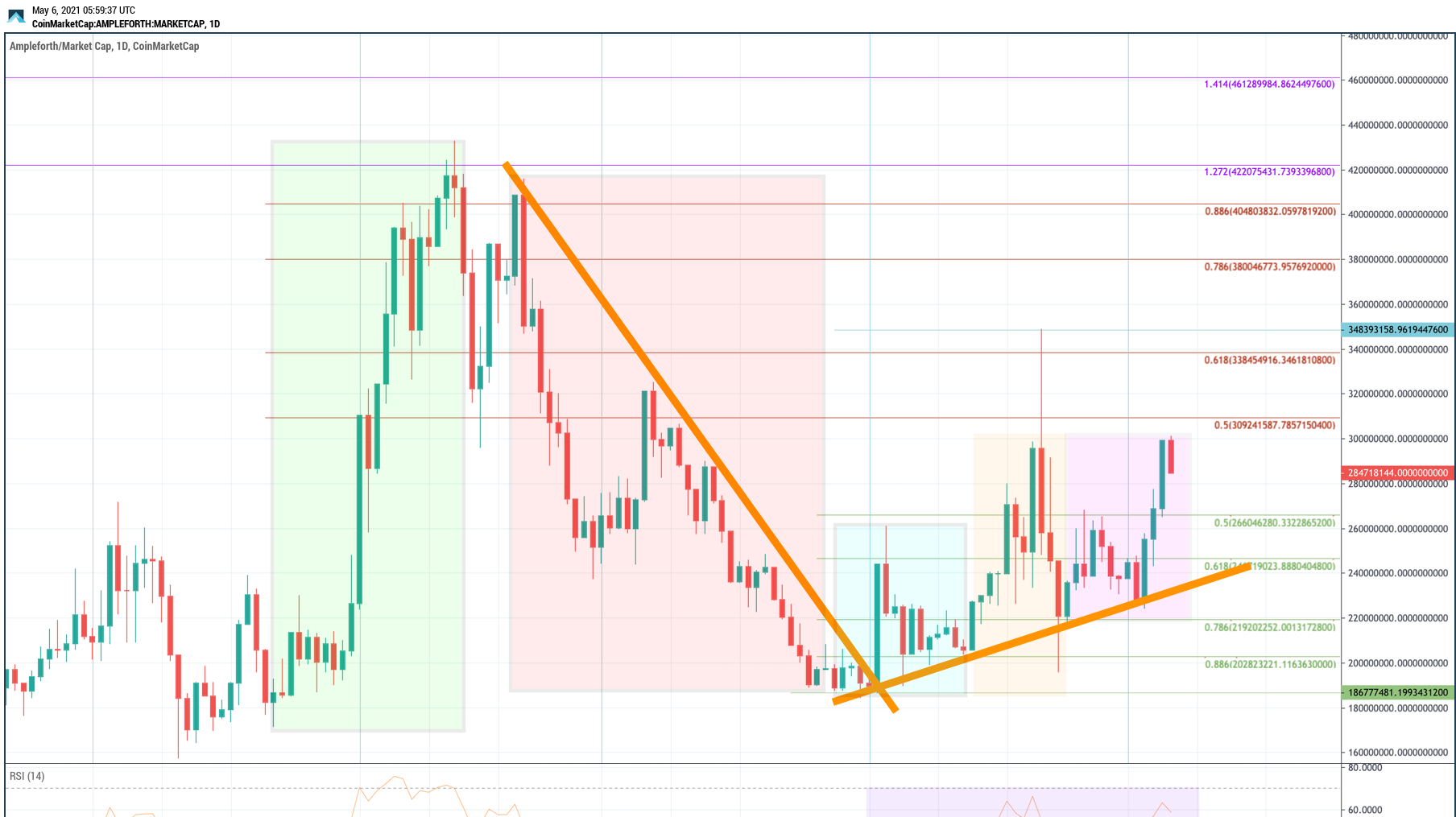 It’s been a while, but I’m back again with another Ampleforth analysis for you.

If you have been tracking $AMPL over the past five weeks, you will know that things are starting to heat up quite considerably. It feels as if the second major expansion cycle is upon us - so long as the total market cap for Ampleforth can break past $300 million again.

In the past three weeks alone, $AMPL has been consistently above the $1.06 level, meaning that holders were experiencing positive rebases each day. In fact, the total average of positive rebases over the past 22-days has been 1.32%. That means you earned an additional 1.32% $AMPL on your holdings each day - compounded! 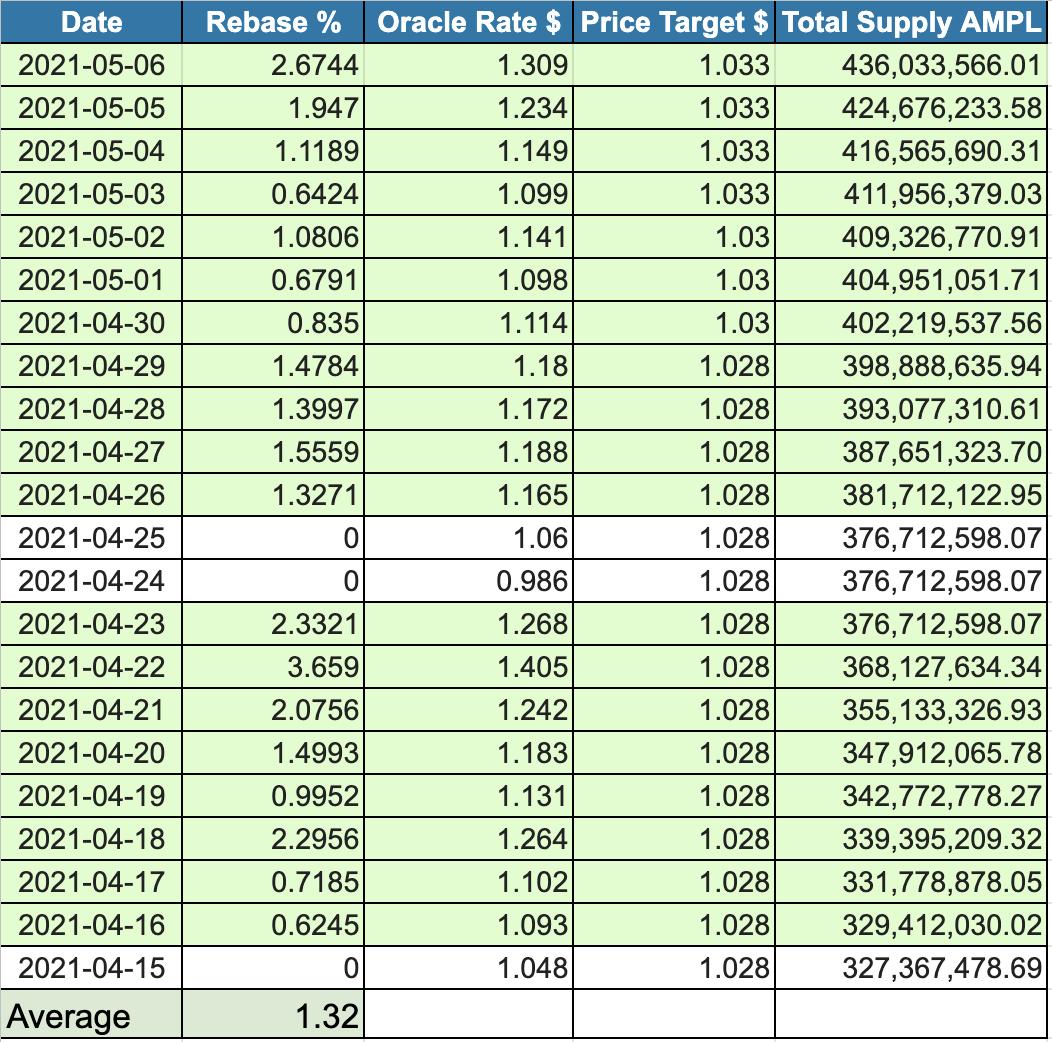 The optimism started at the beginning of April when $AMPL finally surged above the $1.06 threshold for the first time since late February. This sparked a wave of excitement amongst $AMPL holders as they anticipated a slew of positive rebases that was long overdue.

To the surprise of many, the team at Ampleforth decided to reward all $AMPL holders with their Governance Token called $FORTH. The token was available to all $AMPL holders and was split depending on your role in the ecosystem over the past year or so. You can read all about $FORTH and how it was distributed here.

The launch of $FORTH sparked a wave of activity on the network as the Daily Active Addresses metric from Santiment started to spike;

The $FORTH launch caused the DAA metric to spike to highs that had not been seen since early February as users started to enter the network again. As a result, network growth also started to increase;

Before the news, the network growth was pretty stagnant, with relatively little to no growth through Mach and April.

Lastly, the news also helped to cause a spike in the Social Volume as mentioned of $AMPL across all social media platforms also started to spike to levels never seen before;

The great thing about these indicators is that, in this case, they can be considered as leading indicators because the Market Cap for $AMPL has not seen a substantial increase - yet. That means there is ample (no pun) opportunity right now to get into $AMPL before the supply expansion cycle truly kicks off.

Although I will analyze the price toward the end of this article, I would like to focus mainly on the Market Cap. Why? Because the market cap is a better metric to tell if we are in a position of growth for $AMPL as the coin is designed always to head back to its price target - set at the 2019 CPI-adjusted US Dollar value.

First up, here is a chart of the market cap for $AMPL from the beginning of 2021; 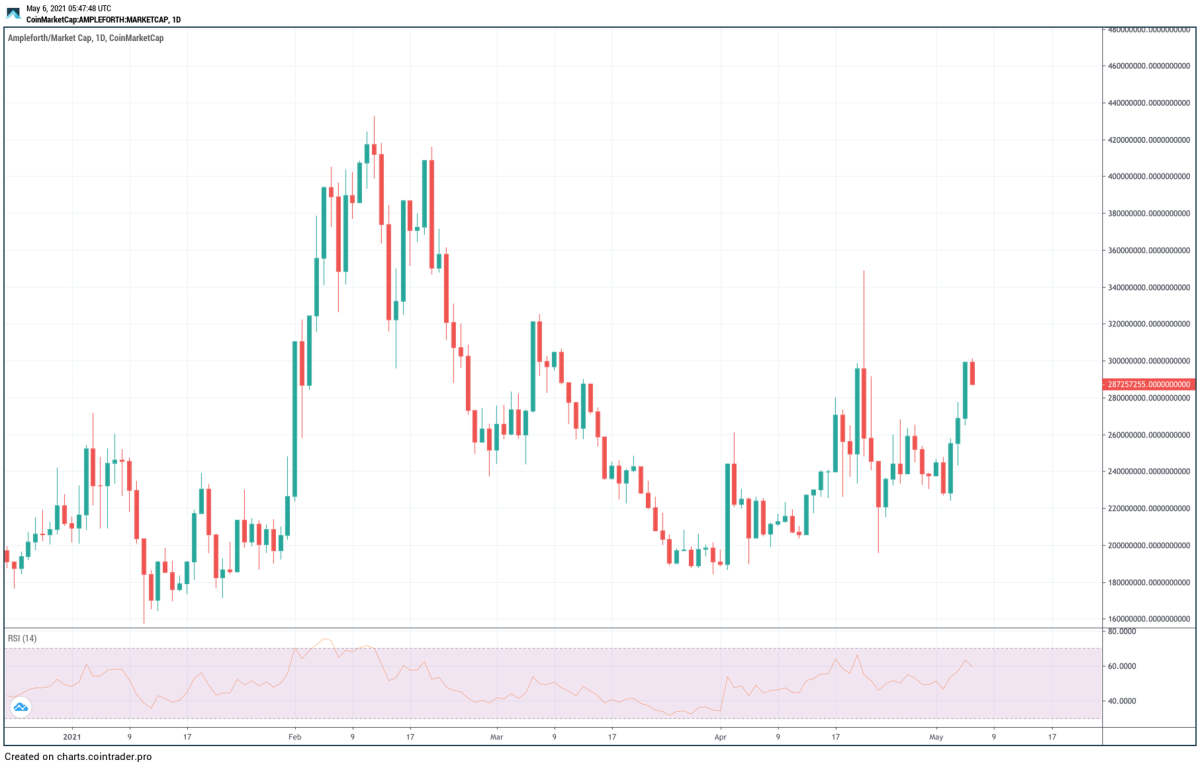 The following has my analysis for comparison. To make it easier to understand I have split the chart into zones; 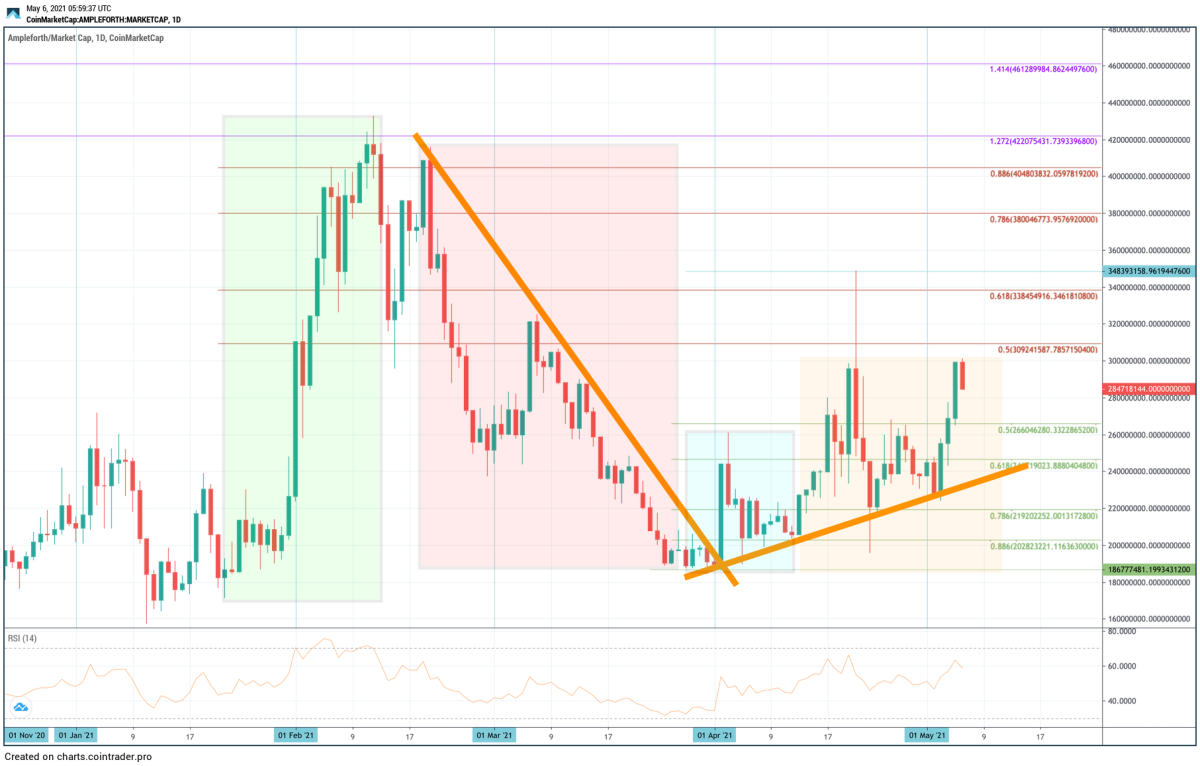 The Green zone - Looking at the market cap for $AMPL in the green zone, it shows that there was a considerable rise during February in which it managed to increase from as low as $187 million to reach as high as $420 million toward the middle of the month.

There, the resistance provided by a 1.272 Fib Extension caused the market cap to roll over as it started to head lower.

The Red Zone - By the end of February, the market cap was sitting at around $260 million, and it continued further lower to return to the late-Jan support at $187 million by the end of March - interestingly, this support is actually a long term .886 Fib Retracement (not shown on the chart).

The Blue Zone - In the first few days of April, the market cap for $AMPL suddenly started to surge, allowing it to break the previous downward sloping trend line (descending Orange line) that was established during the previous red zone. After the sudden surge to $240 million, it dropped lower into $200 million and held there for a week.

The Orange Zone - Toward mid-April, the market cap started to rise as it reached a high-day closing (HDC) price for April of $295 million. It spiked further higher on the 21st of April, the day the news dropped for $FORTH, allowing it to reach as high as $348 million, but it quickly started to fall.

The Pink Zone (Current Zone) - It fell until support was found at $219 million during the last week of April (.786 Fib), and it rebounded from there. In the most recent candles, we can see that the Market Cap managed to reach as high as $300 million. A closing candle above this level would signal that the expansion cycle is about to start.

If you look closely, there is a short-term rising trend line that was established throughout April. The market cap rebounded from this support line in the first days of May and is now starting to push higher.

The Purple Zone (Indicators) - The RSI is above the 50 level for the majority of April. That means that the bulls are in control of the market momentum. So long as it can remain above 50, we can expect growth within the Ampleforth market cap.

Now, to the important part. Where is the resistance moving forward?

If the expansion cycle starts and the market cap for Ampleforth continues to rise, resistance can be expected at;

The market might find resistance at each of these levels, but if it manages to break one resistance, it is likely to push higher until hitting the next resistance.

Now, let’s take a quick look at the price to wrap this up;

First, let me show you a clean chart starting from the beginning of 2021; 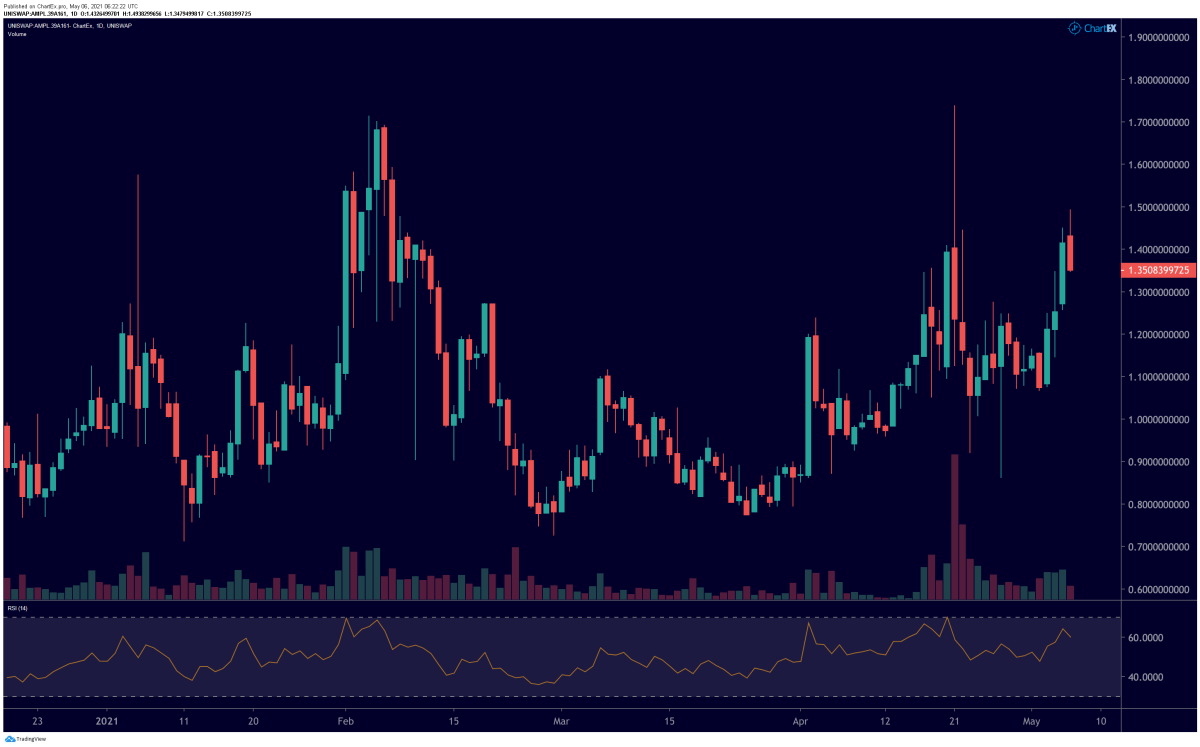 Following is a chart with analysis added. Again, to make it easier to understand I have split it into zones again; 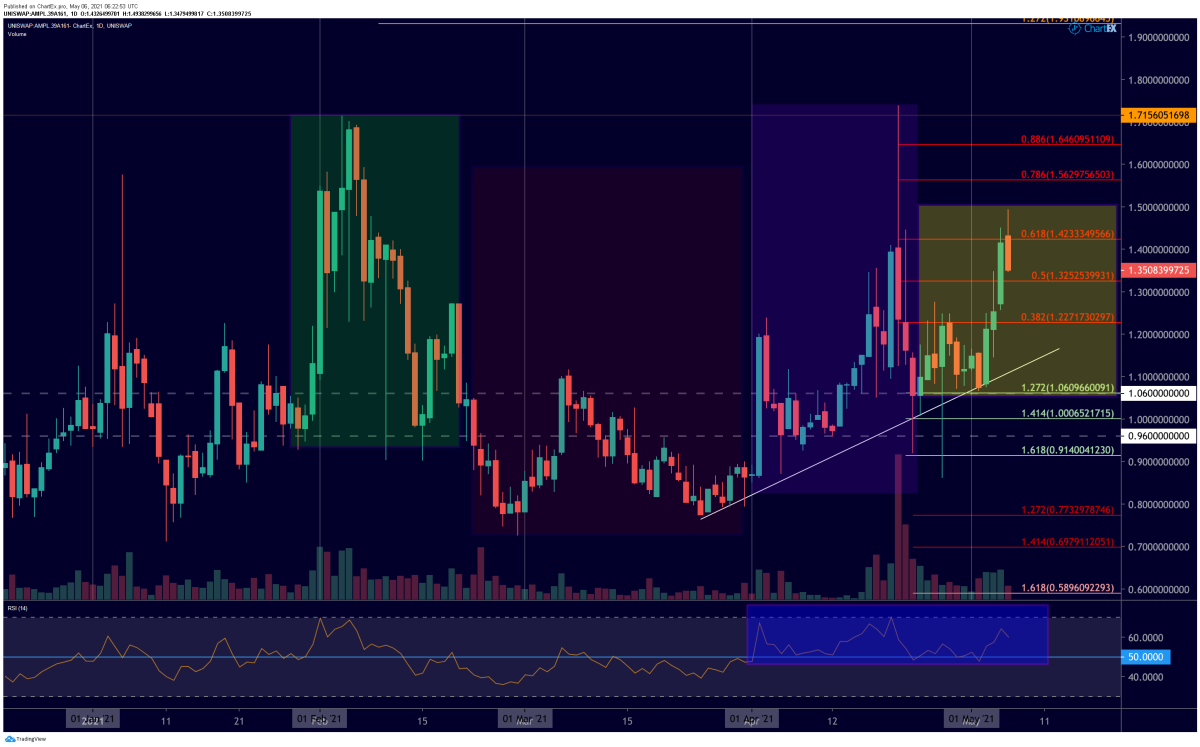 The Green Zone - In early February AMPL started to surge above the $1.06 threshold as positive rebases started to kick in. It continued to skyrocket until resistance was met at $1.71 and then the price started to fall. Although the price was falling, it remained above $1.06 until the final week of February and during this entire time the supply was experiencing positive rebases, allowing the market cap to increase.

The Red Zone - Throughout the entire period of March, $AMPL was remained beneath $0.96, providing a month of negative rebases. It did attempt to reach positive rebasing territory but this was short lived.

The Purple Zone - At the beginning of April, $AMPL started to rise again as it exited the negative rebasing terrirotry. The highest daily closing price was $1.40 in April, around the time the $FORTH token was released to $AMPL holders. It sank from there but didn’t close beneath $1.06 - meaning it remained in the positive rebasing territory and hasn’t been in the neutral band (between $1.06 and $0.96) - except for a few spikes.

Interestingly, you can also see a rising trend line here that was established during April.

The Yellow Zone (Current Zone) - In the last week of April, $AMPL attempted to break resistance at $1.22 (bearish .382 Fib) but could not overcome the level. As a result, it dropped lower into the $1.06 level at the start of May. From there, it found the support at the rising trend line and started to rebound.

It is probably better for $AMPL to stay in this region between $1.50 and $1.06 if we would like to see an extended few weeks of rebases. If it continues further, it might become parabolic which would cause it to sink back into the negative rebasing territory.

The Blue Zone (Indicators) - Looking at the RSI, we can see that it has been above the midline since the beginning of April. This shows that the momentum has been in the bullish favor over the past month. A break beneath the 50 level would be the first signal that the positive rebase run might be coming to an end.

Following is a list of areas where we can expect resistance moving forward;

As mentioned, the market cap is undoubtedly the better metric to conduct your analysis. If the market cap continues to rise, you can expect solid gains on your $AMPL holdings through the positive rebases.

Currently, it is shaping up quite nicely as we wait for a break of $300 million to confirm that we are ready for another rebase cycle that might help the market cap rise above the February highs at around $420 million.