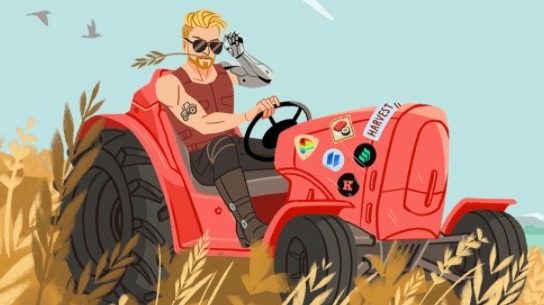 Now that Harvest Finance has launched on BSC, some users who are new to crypto may wonder about the history of FARM and its reliability. This is to help people who have been focused on BSC and not the Ethereum network, of which there are a growing number. I will also explain why Harvest will be more compelling on BSC than on Ethereum.

During last year's DeFi summer, a number of milestones occurred, starting roughly with Yearn (originally iearn) and the launch of the YFI token. This kickstarted a great deal of activity, leading to the emergence of SushiSwap vs Uniswap and the food meme (Yam, Pickle and others), as well as new yield aggregators that borrowed from and built on Yearn's approach. Harvest, started by an anon team, adopted the degenerative meme, building on Yearn to offer complex yield farming strategies that simplified the investment side. Just put some funds into a strategy and it did its magic to optimize yield across liquidity pools.

One of Harvest's innovations was auto-compounding, which is still not used by a number of protocols. For example, PancakeSwap only recently added a "Compound" button to its pools, which reduces the steps involved but still requires manual effort. On Harvest, it is possible to see your balance increase continually, with no need to claim and deposit (might require a page refresh, and not for all rewards). In the early days, the page showed rapidly updating TVL and other numbers, which were not necessarily accurate. The team then deployed a separate dashboard on Github to provide more accurate numbers, and this has evolved into a very detailed dashboard that is referenced in the main site.

So the early approach was about technical innovation and more sophisticated approaches in DeFi, with aggressive development by a dedicated and nerdy team. It was therefore surprising when the project was hacked by an attacker using flash loans. This resulted in an extensive community outreach campaign to retrieve the funds, some of which were returned by the attacker. Harvest also was very conscientious about creating a plan to return funds to affected users. But the surprising fact was that an aspect of the code from Yearn being used in a different context was exploited, which is the kind of inadvertent gap that can occur as DeFi projects copy from and build upon each other. My personal view is that projects that adapt to attacks become stronger in the process, and that is not a deterrent from investing, in my opinion. (The project has now been audited by 4 major firms.) I do recall that Banteg from Yearn suggested a simple fix about preventing transactions from completing in a single block, and one would hope other DeFi projects have taken that on board.

I was invested in Harvest at that time and was not affected. In fact, I have been in the FARM profit sharing pool for about 9 months and have been quite happy with the returns and the growth of the FARM token. One of the appealing qualities of that pool is that it uses the FARM token by itself, which means it can appreciate in value without risk of Impermanent Loss. And it is a direct way to participate in the profit of the project, similar to how YFI used to work if staked in the Yearn governance pool (but no longer). And finally, it auto-compounds.

Which brings me to the point about why Harvest will be more compelling on BSC. One of the project's strengths is its advanced smart contract approach to reducing gas fees, which is a major benefit on Ethereum. However, some of the strategies involved staking in a number of protocols, or multiple steps when depositing and staking, and the gas fees to participate were quite high, simply because a number of transactions had to be completed when joining. This barrier to entry will be much reduced on BSC, and many users will be able to participate with smaller amounts. This also means that the users on Ethereum were usually contributing larger amounts and the maturity of the protocol has progressed steadily with that audience, as well as with increased community participation, including development by the community. Check out the Work page if you want to get involved and be rewarded.

Some new info from support on Discord: the profit-sharing FARM pool is currently on Ethereum only (though there is a pool in Valuedefi that provides good return on bFARM), and Anyswap can be used to transfer bFARM to the FARM pool on Ethereum. In addition, there is work going on to support the PancakeSwap V2 liquidity pools.

Update on 30 April: the CAKE pool has been working well and there was a recent bug in the UI which seems to have been fixed. Also I just helped identify an issue in the XVS-BNB pool, which the team is looking into. As could be expected, there are some slight issues as the BSC version is rolling out, but the team has been very responsive. And the CAKE pool has the same benefit as the one on PancakeSwap - single asset which can appreciate with the market - but the CAKE return is higher on Harvest (presumably because of the auto-compounding) and there is FARM reward in addition.

You can use this to add the token to your wallet, since FARM will be claimed as a reward.

Correction: As of 30 April, PancakeSwap has added an auto-compounding version of the CAKE pool, and the APY is higher than before, though it will likely go down. Maybe Harvest game them a nudge!

News: on around 9 May, ValueDeFi was hacked. The FARM-BNB pool was not directly attacked, and it is possible to unstake the LP token, but there seems to be no underlying liquidity. This is an evolving situation. In the meantime, sending FARM to the Eth version of Harvest via Anyswap and staking in the FARM pool there seems the better approach. Build up a decent amount of FARM before you send it, though, as Anyswap is not cheap.

This is to fill in the gaps between UIs and anyone coming to projects for the first time. I think of it as ways to improve UX or documentation, which are often lacking in the rush to launch new projects. It will also address common usability issues in more established projects.