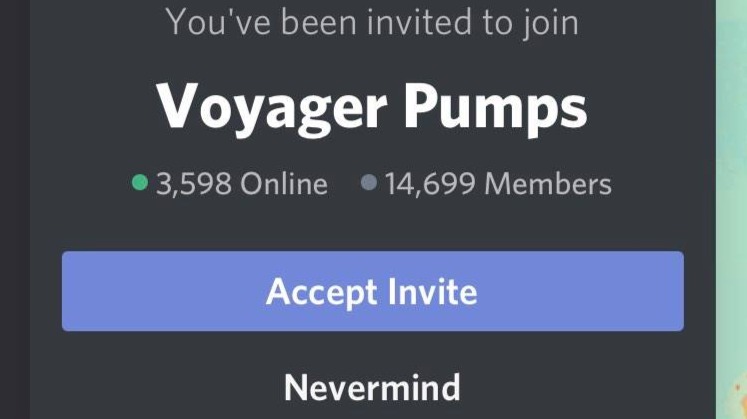 If you think something is too good to be true, it probably is. They promise you the moon, the stars and everything in between, plus a 100–1000% increase in profits if you just join their scheme.

Bitnovo explained it clearly in their article.

A Pump and Dump scheme is a type of stock market fraud that involves artificial inflation (“pumping”) of a stock price through false, misleading or exaggerated statements about the stock price. The fraudster can profit from inflates the price by quickly selling the securities at a high price (“dump”).

In the stock market, this is illegal and subject to lawsuits and hefty fines, but in the world of cryptocurrencies, there’s a gray area where this scheme exists rather lavishly.

The puppeteers behind these schemes usually hide anonymously behind Discord, Telegram, Facebook, Twitter, etc. groups claiming to reward their followers with great gains should they follow their instructions when to buy and what cryptocurrencies to buy.

A week ago as I was happily scanning through my Discord, I was suddenly invited by a random person to join their group. (RED FLAG!)

The name of the groups were “Voyager Pump” and “Galactic Pump”. If you ever see this invite on Discord, run away and don’t look back!

Anyway, let me share to you what I have observed after I joined the group above. I saw first hand how these scoundrels operate and scam, well not really innocent people, but still scammed them out of their hard earned money.

Here’s what they tell you.

Here’s what you do not know.

The spike in the price was when the call of what coin to buy was made. 1 second after, the coin’s price dumped hard.

So what happened here?

The moderator of the group named “Voyager” announced the coin to be bought the exact same time the volume spiked in this chart. They pumped the price before even announcing the coin and anyone who were following them would have bought the token at an insanely high price and be left hanging when the price “dumps”.

The moderators of the group dumped right after making the call and everyone who followed them suffered loses.

To make sure participants are left hanging, they mute the chat right before the scheduled pump so unknowing participants will not be able to communicate to each other and not know what to do.

Moderators will keep on sending messages like how good the pump is going. Only the moderator can post messages. (Another RED FLAG!)

Watching from the sidelines, I felt really bad for those who followed this group. There definitely was no “profit” to be claimed. They were the only ones who profited because the price dumped immediately after they made the call.

But if you’re in the business of ripping off others, people can’t feel too bad if you get ripped off by these groups.

So let this serve as a warning for anyone who is thinking of joining these pump and dump groups.

You’re not going to be an insider. You’re going to be made the fool who is getting dumped on.

Save yourself the headache and save your money.

Here’s another evidence from one of the members.

Someone messaged me asking if I joined. I called these fraudsters out and they weren’t too happy.

Full credits to Coffeezilla (title included) as an inspiration for this article. His videos are very insightful. You can also see he featured the same moderator whose name is “Hesi” in Galactic Pumps. Check it out.

I could not stress it enough, stay away from these groups and if possible, report them.

Like this article? Follow me for more crypto news and insights on upcoming and latest projects in the crypto space.

I write about game-changing cryptocurrencies. (Not to be taken as financial advice)

Cryptalkers is a compilation of critical and relevant information related to cryptocurrency.