To DeFi's Wall Street, where Web3 ,and DAOs have set up shop, are known as Avalanche (Ava Labs), ConsenSys, Solana, Coinbase, and many others who are not yet  in Asia, but are ,well ,known in ,the United States as Web3, such as Alchemy, Gemini., EmpireDAO, etc .

The biggest topic in New York this year, aside from the NFT NYC at the end of June, is None other than EmpireDAO, so of course I'm going to talk to Mike. 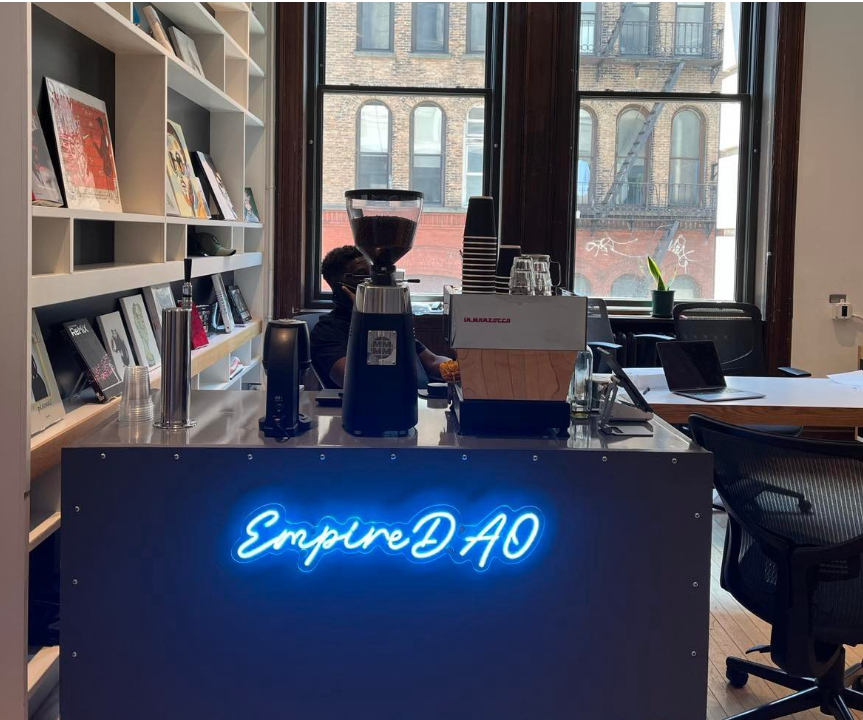 EmpireDAO, the largest Dao of New York Web3, was established in March this year with the goal of becoming Web3's We Work, hoping to serve BUIDLer in New York, and the total fundraising of gossip has reached 80m, and former Brooklyn Nets player Lance Thomas is also one of the main investors. I have bought an entire building in Manhattan, with a total of five floors and a thousand tsubo, the first floor is the world-renowned skateboard brand Supreme, the second floor is all the co-working space and communication space of Crypto-native BUIDLer, and the upper three, four and five floors are all rented by Web3 companies, of which Solana is on the 3rd floor.

It wasn't until EmpireDAO that our belligerents ConsenSys and Alchemy were also here to communicate with Web3 BUIDLer, and Matt (head of ConsenSys DAOs), who was most closely related to our BSOS, was one of the core members of Empire DAO!

After an afternoon chat with EmpireDAO co-founder mike, who is also Multichain, we found that our BSOS and EmpireDAO concepts coincide, Mike has revealed that EmpireDAO's next step is to bring Web2 art to Web3, not in the form of pure art NFT, but more in physical art, such as recent investment in film, Kanye new albums, etc., and we BSOS Along the way, we have also been committed to combining the physical world economy with Web3, and as a member of EmpireDAO, we will continue to create value at the intersection of technology and real applications! WAGMI .

The product head of the former uniswap NFT posted a photo of Solana opening a physical store in New York on Twitter and blew up in the circle! As Solana's partner, we were invited to a pre-opening reception. About the introduction of Solana Space, I have been interviewed by the digital age and the dynamic distinction .

The opening reception was attended by a large number of familiar Web3 faces, and we also shared our recent situation with many Crypto VC friends in the venue, first sell a close, please look forward to the news of our round of fundraising solana .

I guess this doesn't need to be introduced, no one should know this Web3 world hegemon, ConsenSys founder Joseph Lubin is the co-founder of Ethereum, one of the products below the Metamask Little Fox DAU broke 30 million people this year...Solana

BSOS has established a very deep technical partnership with ConsenSys from the very early days, cooperated closely along the way, and also made ConsenSys Quorum's first business case - supply chain financial blockchain system, which has also co-hosted large and small Tech meetups in recent years, which is always a pleasant encounter, and secretly shared with you here, ConsenSys has internally split each product into different DAO to manage, Web3 The leader of the sheep deserves it.

Networking events are the essence of American innovation -:

The biggest difference between the U.S. and Taiwanese startup environments is the number of networking activities after work. BSOS has a regular participation habit in Taiwan, coming to New York is of course also a custom, in New York almost every day there are Networking events to run, just choose the Web3 and FinTech theme of the networking event is too many, three activities a week after work is basic.

For example, I met the Founder of NYVP (New York Ventures Partner is a New York super veteran VC) at a networking event, and I had talked about it before, but I didn't expect to meet here again;

Except for the Networking event that can be found on the Internet, no one needs to use some ghost brains to find resources! BSOS is fortunate that we were invited by Web3 partner Lukka to participate in the 2022 Formula E (F1 electric car) competition, which was held in Brooklyn this year, and more eye-catchingly, this year's team sponsors have appeared two Web3 companies, Lukka and Avalanche.

Lukka mainly connects the exchange API and twitter, discord on the data, into standardized easy-to-use information, customers can be used as a transaction basis or control costs, the current customers already have eToro, Circle (USDC issuer), S&P Dow Jones and so on .

A well-known public blockchain, one of Ethereum's strong competitors, focused on transaction speed, low cost, and eco-friendliness, calls for Tokenizing ALL assets, and certainly doesn't miss the RWA supply chain assets we offer from BSOS. At present, the TVL on the public chain has exceeded 3B US dollars.

Share a few tips:
Don't underestimate this kind of social occasion, a bunch of hidden big guys will appear from time to time. This networking starts with a small talk, a short elevator pitch (super important!) Must be ready at any time), interested people will immediately go to the appointment and officially pitch. The human vein is the best resource, and through the introduction and then the introduction, the number of things that can be obtained behind it is unimaginable.

This trip is less than 50 VCs, but also with a lot of VC friends to share the situation, then I have to introduce the latest type of investors - VCDao New York already has a lot of Crypto VC, now the top 100 famous universities have also set up VC Dao, this trip I also with NYU, Columbia University VCDao did in-depth exchanges, although the identity is still a student, but for the Web3 vision and views are extremely clear, has surpassed most of the industry people, Web3 young blood has become more and more mature, not to be underestimated.

Bear markets are the best times for BUIDLER, with Crypto, DeFi entering a bear market, Aave or Compound's annualized returns from 6–9% to less than 2% now, we believe that DeFi entered the second growth curve, not just crypto assets as a pledge, but need to integrate Real-World Assets; BSOS's SaaS, which came online at the end of last year, is based on this idea, connecting the receivables in the real world supply chain assets to connect with DeFi, which has circulated more than $1M per month; This trip to New York was with many Web3 VCs, whether circle, Alchmey Ventures, Jump Crypto, EVM Fund, who showed a high interest in the topic of RWA and agreed that the advantages of exchanging Web3 value into the real world are the next important topics!