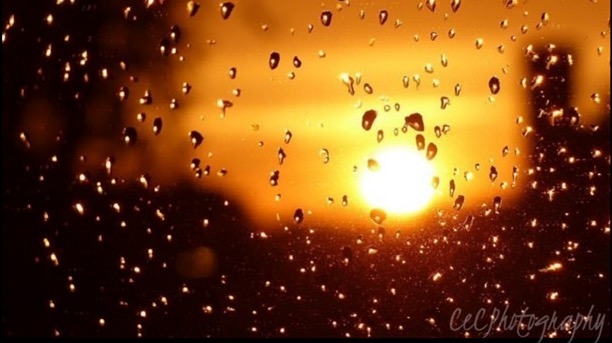 I opened the window one night to hear the sounds of a soft rain falling. The outside has been unobtainable to me as of late and I just wanted that fresh, clean air that only a good rainfall could provide. As I stood with my face pressed against the screen taking it all in, I discovered the music happening just out of my reach.

Everything on the outside is a surface with a melody just waiting to be discovered; different textures creating notes on a scale that only nature can create. The rainfall completes the process by playing these notes and creating the songs.

I closed my eyes and listened. At first, it just sounded like any other rainfall. Steady, relaxing, understanding why this sound is used as white noise to help people sleep.

But the more I listened, the more I began to isolate the sounds. I could start to hear some differences in what was happening outside. The splashes, the tings, the muffled thuds and tried to figure out each individual note.

When the drops hit the cars parked in our lot, the rain created a metallic plink that changed depending on whether it hit a roof or the hood of the different vehicles. When it hit the grass, it became a muffled squishy sound, if it hit puddles, a little splash would happen and the trees created various noises from thuds to cracks and even a deep bass. There was an orchestra playing and I had center seats to its performance.

It was both random and uniform all at the same time. No melody could be sung to it as it was music in its most abstract form; it was addictive and I didn’t want it to end.

I let every drop wash away what had been bothering me before I had opened that window. I let my troubles fall away into those puddles and grassy areas, becoming one with the earth so that I could clear my mind even for a little while. I just listened to the music that was before me and told myself not to let this moment be taken for granted.

The rain slowly tapered off after a bit and it was time for the window to be closed. I walked away with a feeling that I had just witnessed something special. That it had happened just for me. And I will carry that feeling until the rain decides to perform for me once again.

Every now and then I need to stretch the creative muscles. Here you’ll find stories, random writings and just an occasional poem. If it pops into my head, it may land here.