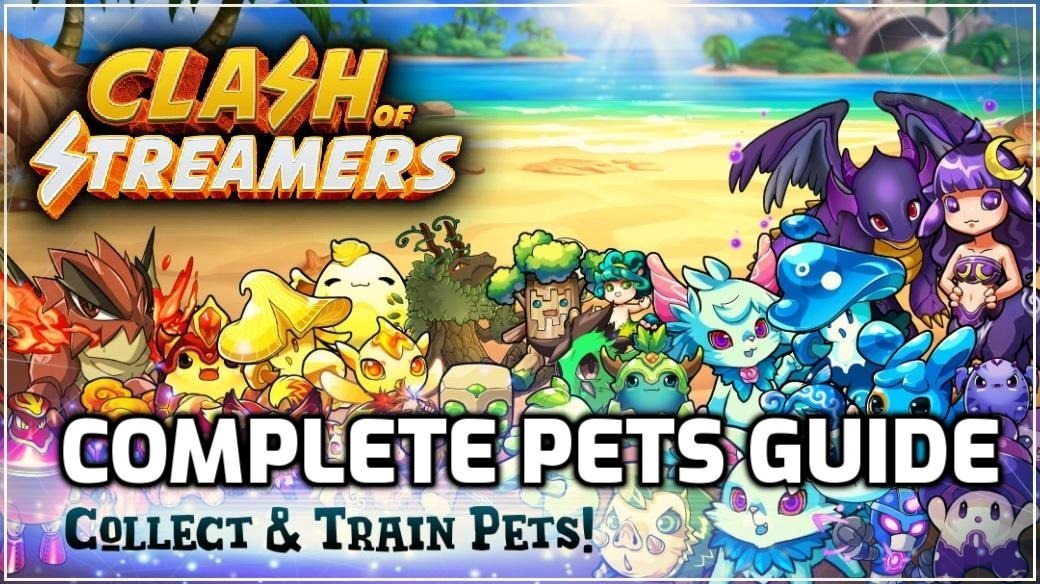 Another Guide on the Clash Of Streamers Play2Earn Mobile Game, this time explaining most of what there is to know about Pets...

For the first 5-6 months playing this game, most of my focus was on just upgrading my heroes and doing battles without really understanding all too well what the pets were about even though I kept collecting and upgrading them. Now that I understand, they have become one of my main focus points in the game as they are closely tied to the Play2Earn aspect of Clash Of Streamers. You can download and try this Free2Play Mobile Play2earn Game for yourself by Scanning the QR code on your phone!

[Everything written in this article is my personal understandings of Pets in the game and not everything might be 100% accurate even though it should be at least very close to it. Future updates might also change some of the dynamics.]

What Are Pets About?

In short, I would argue that Pets are one of the main ways to Level Up your Account and get stronger which makes you get better Rewards. Pets also can act as a great way to Earn Crypton which is needed to Cash Out or Export NFTs.

The Difference between Pets vs Pet Skins

The 100 Pets that you can get each day in the game have Stars attached to them. When you merge 5 of them in the Upgrade Building, 1 pet will increase by 1 star while the other 4 are destroyed and turn into pet skins.

How To Collect 100 Pets Daily!

So each account can get a maximum of 100 Pets every single day. This is done in 2 Different ways:

1) 50 Eggs From Rewards, Loot Boxes, or Hatcheries: Just by playing the game, you are able to get 50 eggs each day which can be hatched to get 50 pets. The eggs tend to come from the Daily Quest Loot boxes, Achievement Loot Boxes, Campaign Tower rewards for wins or losses, or they are passively generated when your hatcheries have immunity. Immunity comes with VIP levels and also from completing the weekly Pet Event. The way I understand this hatchery immunity mechanic is that it prevents players from creating multiple accounts to come back to them every couple of months to get all the pets at once, players that reached higher VIP levels by spending are able to do this and get a lot of pets & progress passively.

There are 2 ways to open these eggs:

2) 50 Pets That can be Attracted or bred: There are 3 ways to get these 50 pets, and these have ways to get an increased chance of them being colored of 75%.

All these pets have a certain chance to be Rare/Epic/Legendary/Shiny and they also have a chance to come with higher Stars and Levels:

How To Use Pets!

So the game allows players to set 1 Guardian Pet for Each Faction that will give you benefits in the game depending on their abilities. These Abilities can be changed in the Spellbook Building. There is an incentive to upgrade and level up Pets since Higher Level pets have more abilities unlocked (Level 4 is MAX), while higher Stars increase the power of the abilities (9 Stars is MAX).

In order to choose your Pet Guardians, go to The Achievements Building and the Pets Tab where you can see which Pet Guardians are currently assigned. For each faction, you will be able to choose between the 6 strongest pets just by tapping the image of the pet on the right. When you change pets, it will happen at the time of the weekly reset. 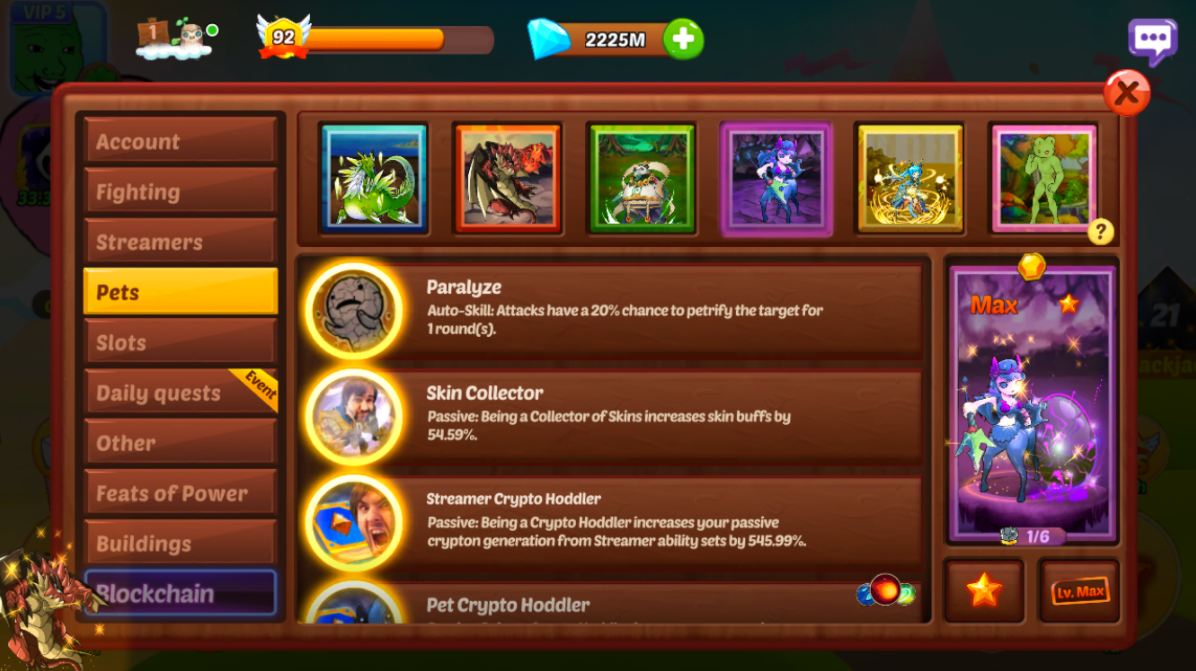 What Abilities to Select for Pets?
Each faction has a couple of unique abilities that can be selected and a lot of shared abilities. A lot depends on what you are planning to do when choosing or changing your abilities. If you are looking to export, it is best to equip the ability where exporting gets a % discount the week before. I personally have the Crypto Hoddler abilities on my pets equipped which allows me to get more Passive Crypton from the Spellbook. If you are upgrading it still, you are best to select the discount for the Crypton it costs to upgrade.

Example on abilities increase based on stars for the Crypto Hoddler

The rarity of a pet (Rare/Epic/Legendary) for as far as I know has no influence on the power or abilities and they are purely cosmetic.

What are Pet Skins Good For? (Gotta Catch 'em All!)

Pet skins bring an aspect of collecting into the game as there are a lot of incentives to get all of them. It will help you complete a lot of achievements & help with specific weekly events which give you a ton of progress. They also increase the luck you have to get Epic/Legendary/Shiny pets which generally are a lot more difficult to get, they can be used as a source of income when selling them on the Auction House for Crypton. Pet skins also increase the Cosmetic Customization on the main menu of the game. 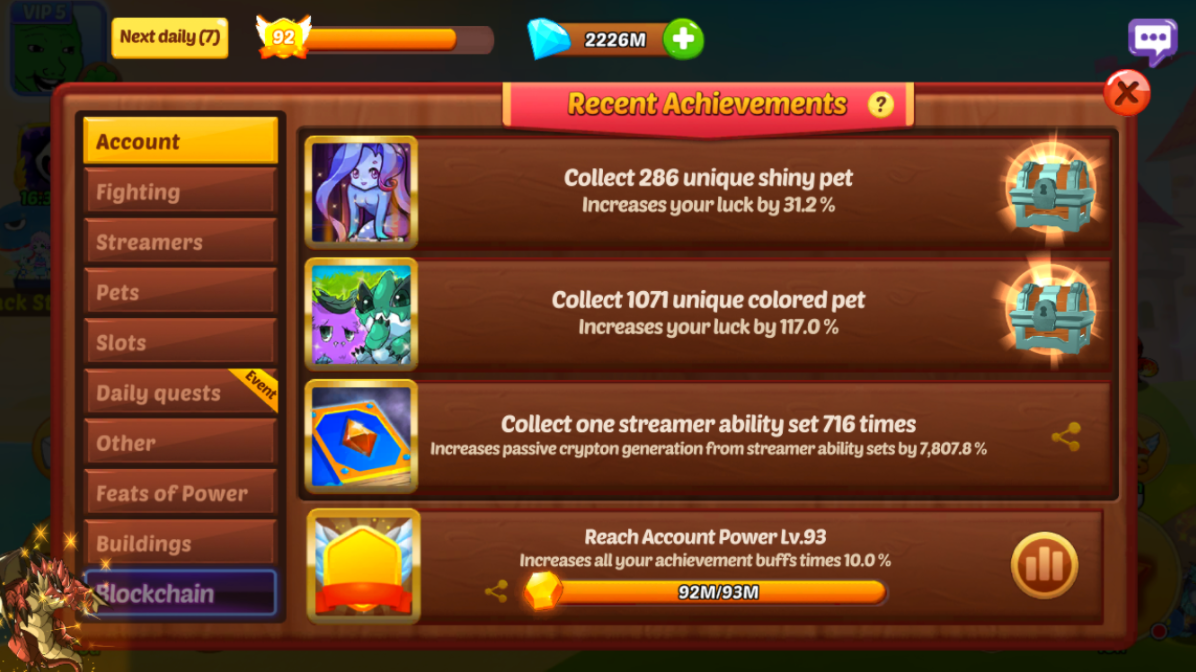 One of the main goals in the game is to increase your account level by Completing Achievements and earning Legendary Stars which helps you to get higher-level Heroes & Pets. Every Unique Colored & Shiny pet is an achievement that gives 1 Legendary Star and many more from Weekly Events that are linked to Pet Achievements. Getting more unique skins in this regard gives a crazy amount of progress. When claiming skins bought in the auction house, you can literally see the progress bar move! Check This Clip on Twitch from iSkittles to see it in action! 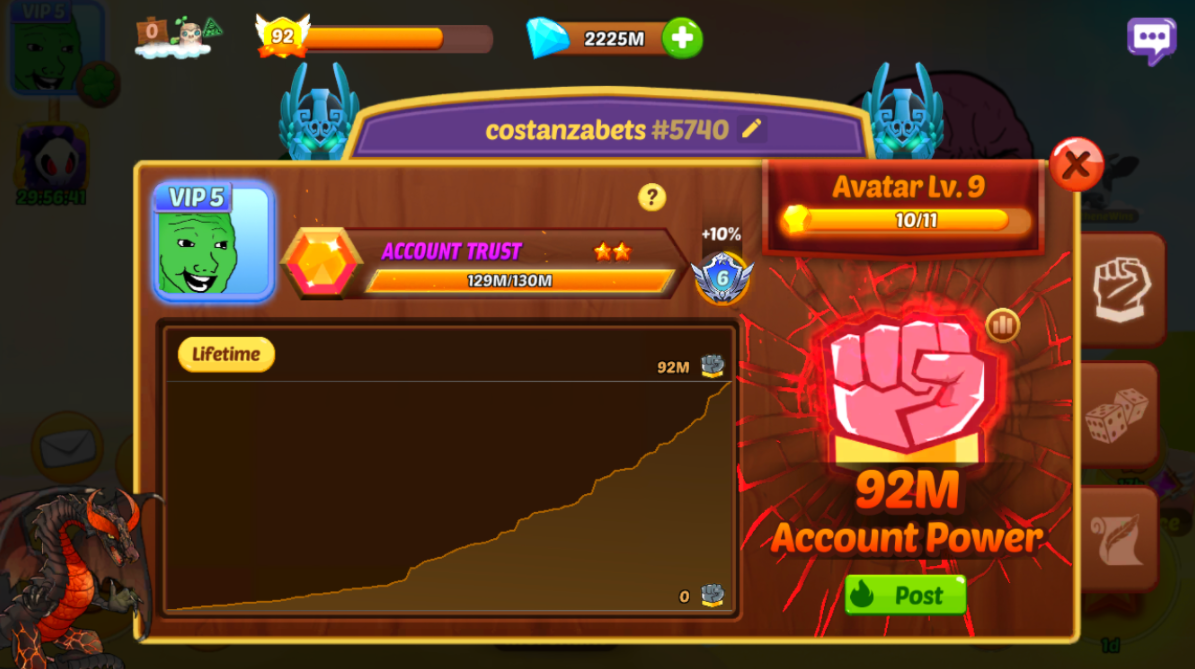 2) Increased Pet Luck
Everything in Clash Of Streamers has certain odds attached to them (See Image above). For example, there is a default 1 in 50k chance to get a shiny Legendary. These odds can be improved and collecting unique colored or shiny pets highly contributes to this. Every single one increases your luck by +0.1%. It is said that big whales could get things to a point where 1 in 500 pets is a Shiny Legendary. You can see your increased luck in the Hatchery Building. 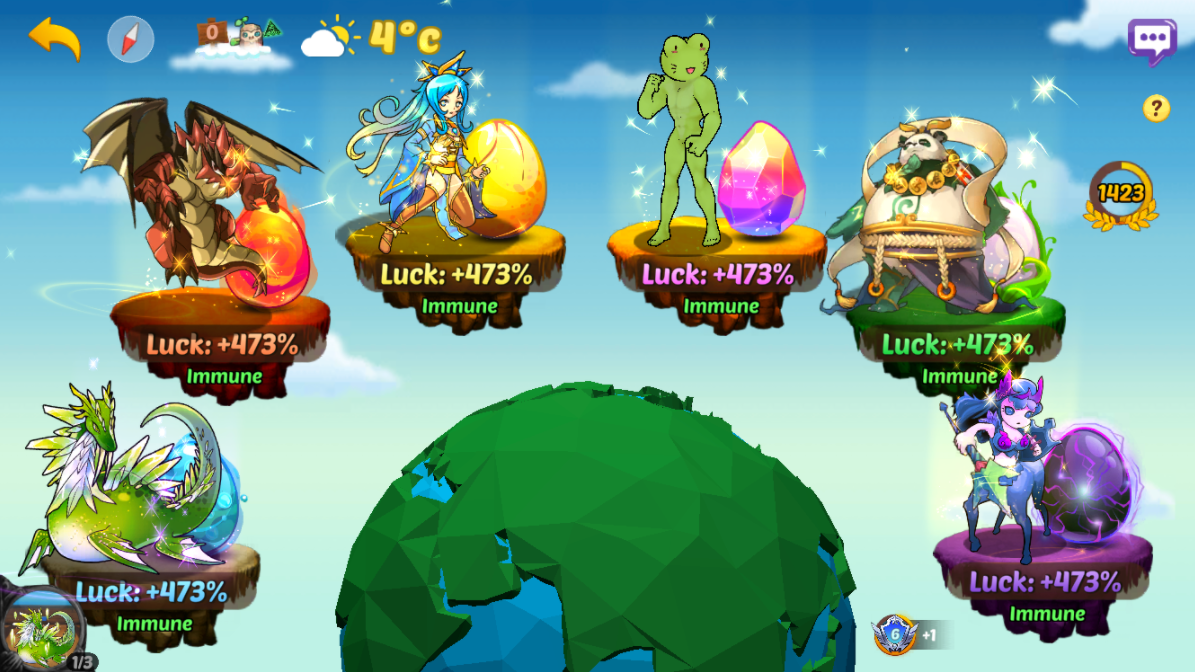 So the more Unique Pets you collect, the better position you get yourself in to get more that you don't own yet which continues to increase your odds and earnings from the game.

3) Selling for Crypton in Auction House
There is a clear reason why players want to buy Pet Skins on the Auction House which gives an opportunity for players who are selling them to earn some Crypton. Crypton can be exported as Gubi which is trading on Pancakeswap. (See Play2earn Economy & Tokenomics Explained) 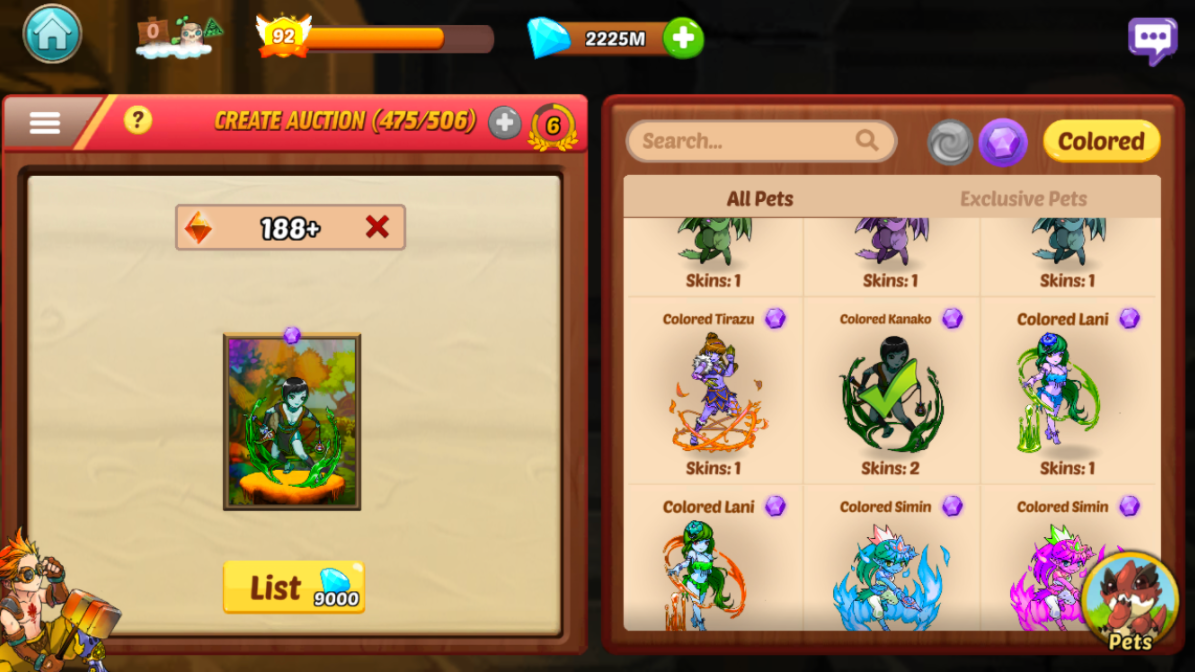 In order to sell pets, you can either put a sell order for the price you want to get (possibly undercutting the lowest price it lists for), or press the smart button which will create a Dutch Auction that gradually goes down in price over time until it reaches the minimum value.

The prices Pet Skins Generally go for at this moment: 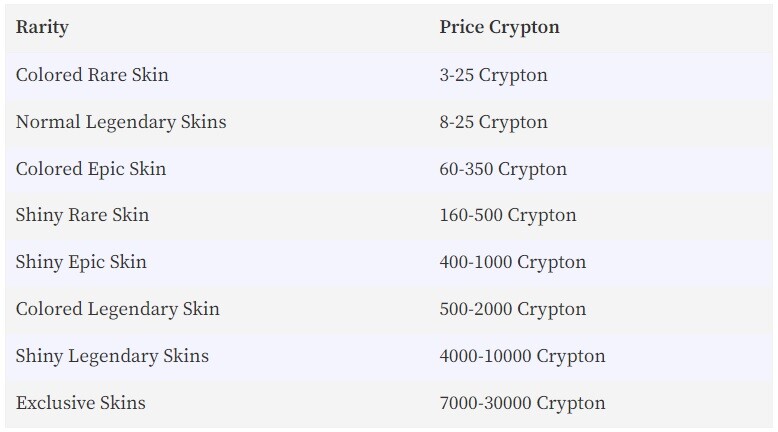 There is nothing really backing up these prices aside from supply/demand. Kappa & Kappa Pride Pets are rarer because only 5 of each can be attracted each day instead of 10 from the other factions. I think some skins are also given to all players as rewards for completing certain achievements and they are not worth as much. I have no clue if pet skins currently are cheap or expensive.

You can see which skin you already own or not and if you have duplicates in the Auction House & Collection Building (the total supply number will also be added in one of the next updates). 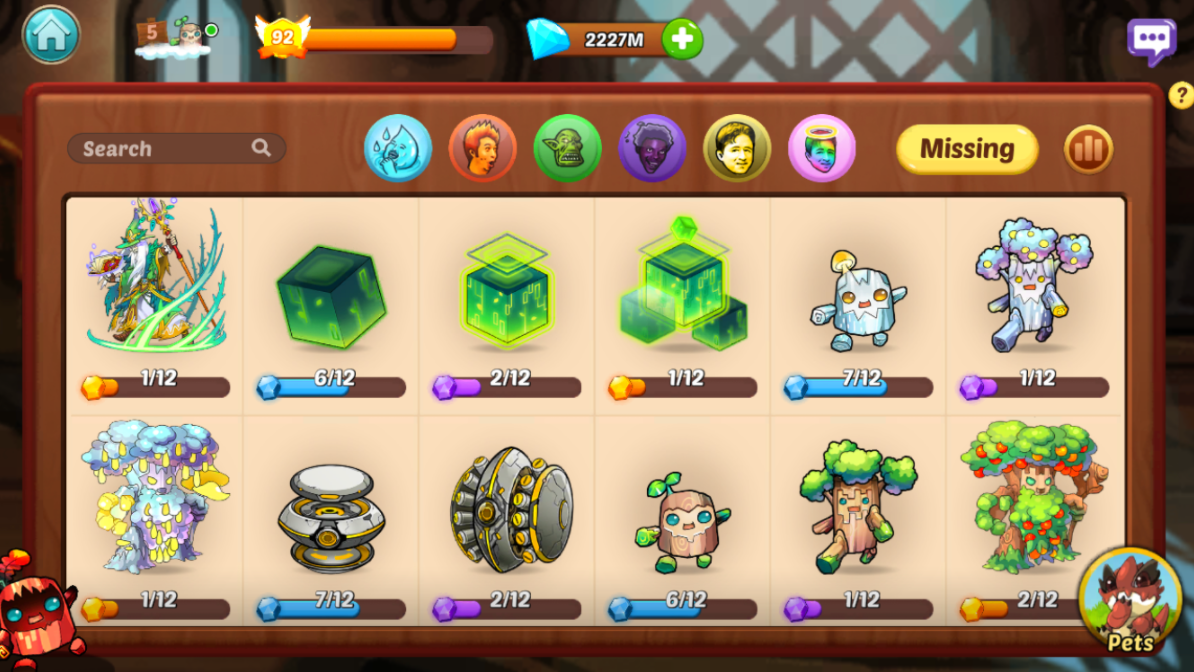 The cheapest way to buy skins right now in the Auction house is to check regularly since most use the smart option. This makes it so that there will always be some cheaper deals available. It for sure is possible to pick up cheap skins and sell them for more in order to make a profit. The game does do a 5% burn on Crypton for each transaction just to avoid alt accounts overly abusing the system.

4) Cosmetic Customization Most buildings in the game can have a pet attached to them which for as far as I understand is purely cosmetic. If you collect all individual pets of a certain building you will also be able to toggle a shiny effect. In order to see the pets of a building and which one you own, just keep a building pressed. Collecting all Regular Pets from a building also completes achievements. 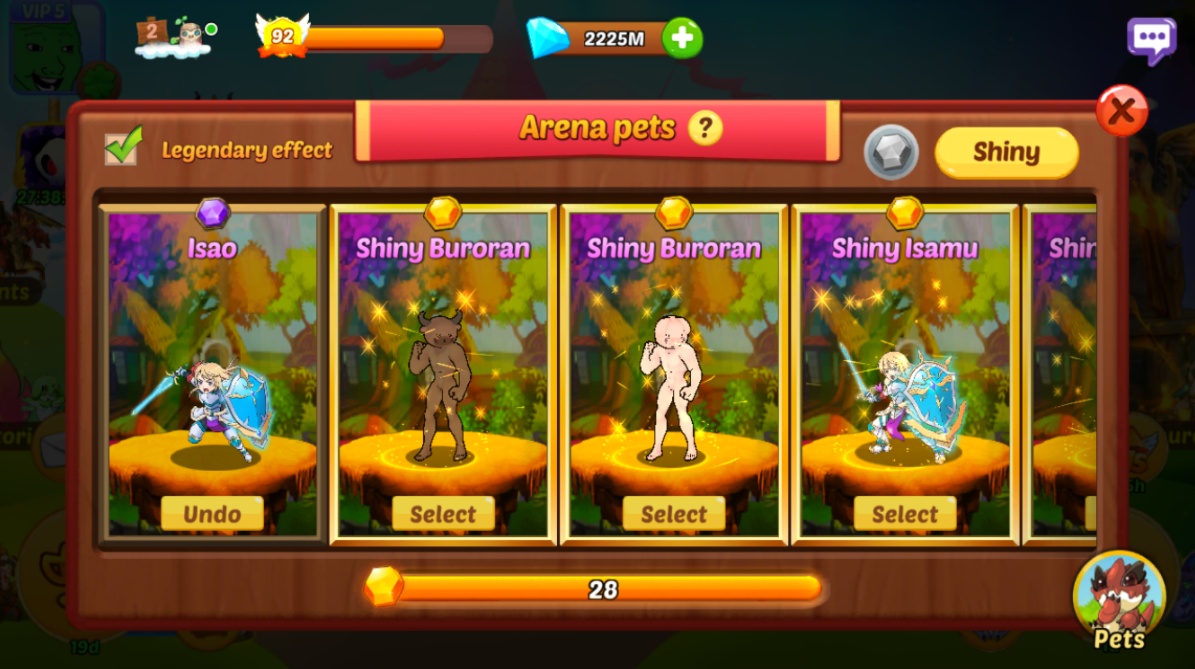 As an extra way to monetize the game, each week there is either an exclusive Pet Skin or an Exclusive Hero Skin for sale. These are available for a week and will never return afterward. They have a similar function in the game to other pets and likely will get more use cases going forward. Since we are very early with a growing player base and most of them do not really know what they are doing, the amount of these skins that are sold is rather limited. If the game continues to grow, they will turn out the be extremely rare. I have been buying them myself and intend to just hold for years to come while the game grows as I do anticipate demand > supply and rising prices. 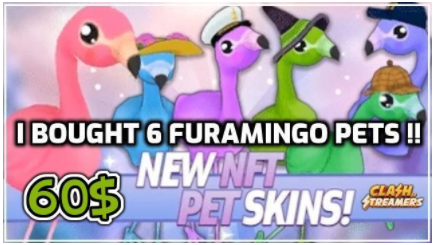 The Pet skins themselves that are attached to the pets with stars are purely cosmetic and can be swapped in the match 3 building. Just select 2 pets and press the casual button with the swap icon and the skins will be swapped 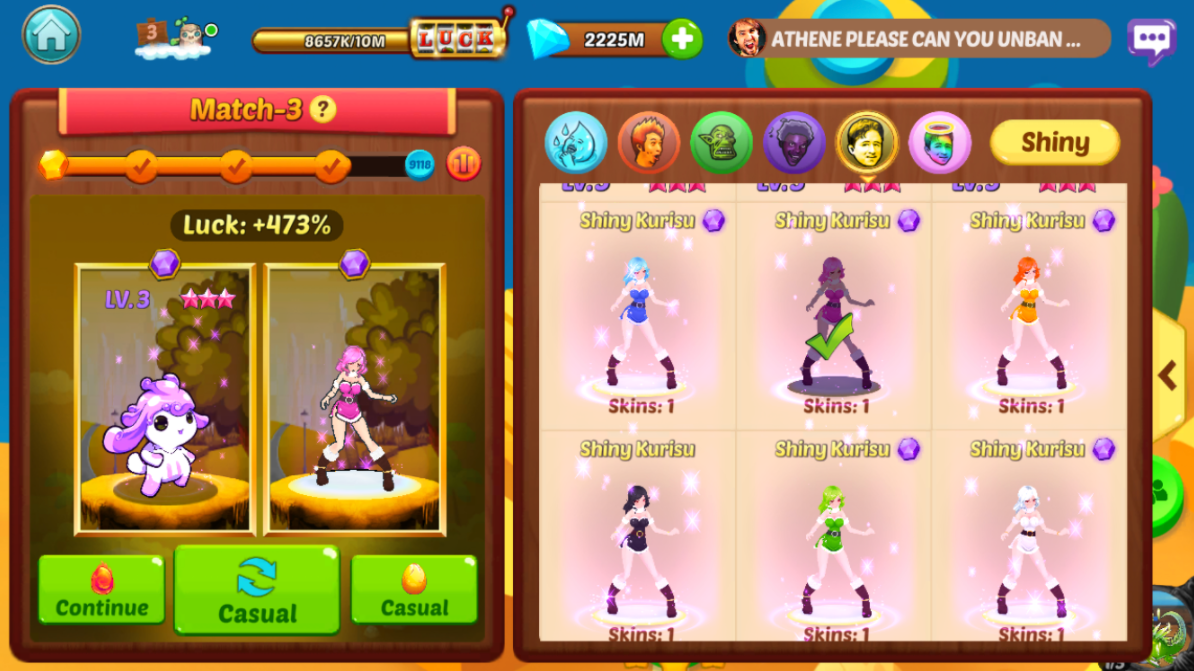 There for sure is a lot of info to process when it comes down to Pets in the Clash Of Streamers Play2Earn Game and most new players who don't inform themselves about all the in-depth game mechanics will miss out on a lot of progress. Once you understand what they are all about, they become a really fun and rewarding part of the game to look forward to each day. You can start collecting Pets as a Free2Play player from day 1 so try it out for yourself and download the game on your Phone by Scanning the QR Code.

For More Info about Clash of Streamers check: