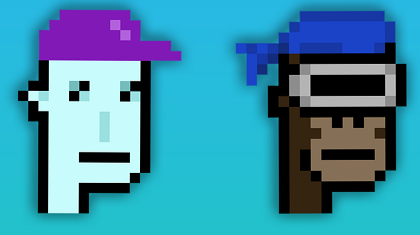 The world of NFTs has taken off like fire again, with CryptoPunks and BoardApes taking over social media and selling for 6 & 7+ figures, and new projects popping up and selling out within hours. While the popularity of NFTs has been quite a rollercoaster, the technology has been around for years, and the THETA blockchain has been a major player.

First with the long running ThetaTV streaming site and it's NFT Emotes, and more recently with the launch of the official Theta Drop NFT Marketplace, which has seen collabs with crypto bigshots like BitBoy & Crazy4Cryptos, and upcoming releases from major artists like Katy Perry. Theta is one of the top blockchains for NFTs.

Now a new independent project has entered the NFT game on THETA with the release of ThetaPunks! Inspired by the original CryptoPunks as well as derivatives on other chains, ThetaPunks are randomly generated character NFTs with a total of 10000 that will ever be minted. There are a varying range of character types and attributes that make each one more or less rare than others. There is also a growing community and developers with some pretty cool ideas in the works regarding blockchain gaming and more.

Since launching not long ago, ThetaPunks has seen a surge of popularity, with 1000+ orders already causing a backlog of the minting process. A handful of rare mints have already been sent out, including 1 alien and a few apes and zombies. To mint your own, you just visit the official website to get their wallet address, and send it exactly 400 TFuel for each ThetaPunk you'd like to mint . Its currently taking 4-5 days for new orders to get minted. It's a really early time to get in on the project, and there's no way of knowing whether these will take off in the future or not, but I see it as an opportunity to get involved with a cool project and an early stage on a very mature and fast growing blockchain. Even if you don't have the TFuel to mint one or don't want to take a chance on them, it's still a really cool project to check out and follow. These are very exciting times for crypto enthusiasts!

If you want to learn more about ThetaPunks and meet the team behind it, make sure to check out the Discord: https://discord.gg/tAgE49YN

Plus make sure to catch my next stream on ThetaTV when I reveal which ThetaPunk I got!

I write about crypto, NFTs, gaming, streaming and whatever else catches my interest.