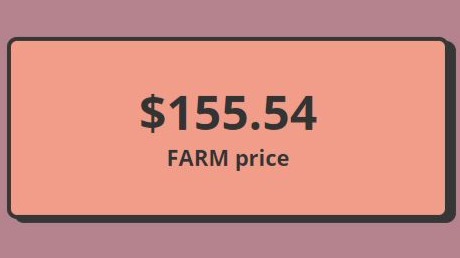 Welp for the most part whenever FARM's yield share percent or APY has been great. Even when it was "bad" it was typically in the 50%+ range. With the recent craziness in the crypto markets, Harvest Finances profits are being depressed. With profits down the amount that is able to be distributed via buybacks is also being limited. This leads to the end result that FARMS APY goes down and not only that but the price of FARM or iFARM depending on which type you have also falls.

One thing I did not imagine though was ever seeing a stablecoin APY being higher than the FARM profit share APY. Currently, the DAI farm on the Ethereum side of Harvest is yielding a little over 14% which is not great but when used as a replacement for a high yield savings account does its job. FARM profit share on the other hand..... 10.22% aka awful. This is substantially lower than I have ever seen it before and made me actually think I was misreading what I was seeing.

As of now, I am not overly concerned but this development is something I would definitely keep an eye on. I would have expected it to be able to continue to stay pretty high or at least higher than this will the BSC introduction as the fees are lower and it has been getting massive deposits. It appears though that that was not the case like I had figured and thus the support I figured would be there is not.

The next couple of days will be interesting to watch developed with Elon announcing the halting of Bitcoin being accepted to pay for Teslas. I am not 110% sure what made him do such an about-face as there has been more and more developments in renewable or green Bitcoin. Hopefully, the farms all bounce back soon. With the sheer number of them and farms covering two separate blockchains now odds are in Harvest's favor to bounce back rather quickly. This is though something that everyone should keep an eye on to track the recovery or lack thereof.