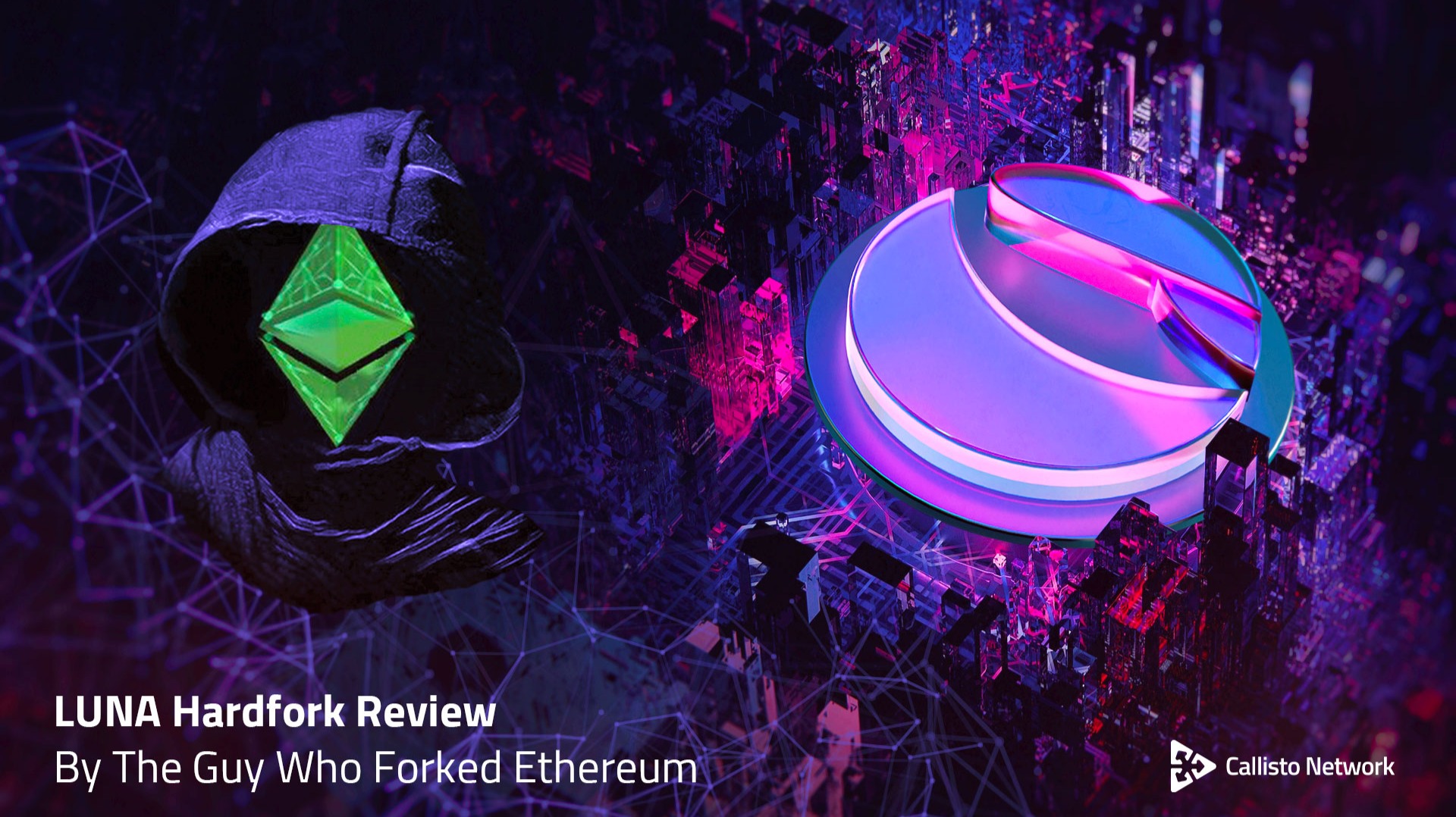 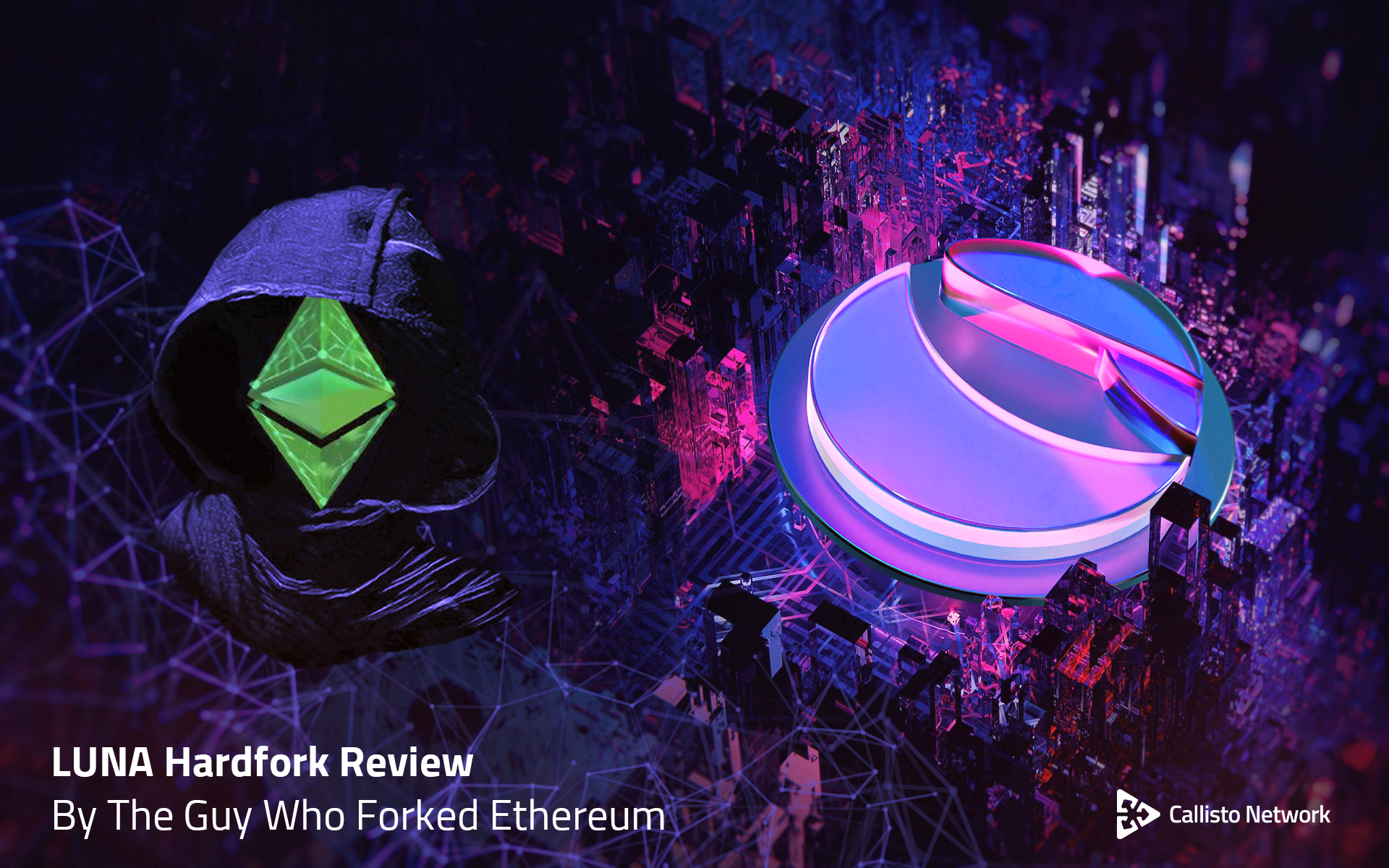 The review has been posted on the Terra Forum, and can be found here​.

This proposal can be voted on Terra Station.

A couple of words about Dexaran

You can find some info about me in this article on cointelegraph. Long story short — I witnessed The DAO hack and I was among those who drove the creation of Ethereum Classic. After that, I ‘forked-off’ from ETC and founded Callisto Network (launched via the airdrop). Since I have unique experience in “forking chains” I would like to share my own experience that could be potentially helpful for the LUNA community.

LUNA crisis in a nutshell

Terra is a blockchain platform that enables its users to create stablecoins. Terra has its own native cryptocurrency traded at the $LUNA ticker. Terra dev team launched their own (stable)coin $UST on their platform. Typically, stablecoins like USDT are “stable” because users give US dollars to Tether company in order to receive USDT tokens. At any time USDT tokens could be converted back at 1:1 ratio to US dollars by the same Tether company. That’s why they are stable. $UST was pegged 1:1 to dollar by a complex algorithm that should have minted / burned LUNA and UST in order to keep the price valid. And this algorithm failed which resulted in huge amounts of LUNA being printed to the market which resulted in its price dropping dramatically.

To fork or not to fork

Notes regarding the “forking plan”

Terra CEO proposes to relaunch the chain from scratch (erasing the transactions history) so it is not a fork of the existing chain.

We already have precedents for a similar situation. TheDAO hardfork. Ethereum Foundation proposed an emergency hardfork to redeem TheDAO funds that were withdrawn by the “hacker”. They gave the community an extremely short time frame to engage in a pseudo-voting process without a proper description and discussion around the topic. Alternative solutions were not discussed widely and a consensus was not built in the community. As the result, a large group of the community (including myself) disagreed with the actions of the Ethereum Foundation and supported the original chain refusing the hardfork. The key point here is that in the case of the Ethereum Foundation, this was a time-limited decision. DAO funds were time-locked and the “hacker” could not use them. Therefore, the decision was rushed as Ethereum Foundation should have developed a solution before the “hacker” could dump all the funds onto the open market.   Mistakes that must be learned:

Although it can be concluded that ETH emerged as the winner of this drama. Indeed, a project supported by the original team will win in the long run as long as the team proves competent (and the competitor suffers from their internal problems).

However, this approach is justified by the time-limiting factor that pushed Ethereum Foundation to make a rushed decision. In the case of LUNA, there is no such time limit and there is a good reason to stick to a more thoughtful solution development process taking into account the above described mistakes.

It is extremely important to note that alternative proposals are presented within the community, most notably this one: https://agora.terra.money/t/say-no-to-the-fork-notothefork/19518​

In the case of LUNA the relaunch / rebranding of the project is NOT a solution to the problem. LUNA is a system of stablecoins. The root of the problem was the algorithm that could lead to such a collapse and the loss of USD-peg of the core stable coin. The removal of the stablecoin does not solve the problem of this stablecoin platform, however. Instead, it simply removes its core part.There were funds allocated to “insure” the collapse like this. Take it and use it on purpose.

Technical Analysis - What The Market is Telling Us

These transactions can be performed in two ways: on the open market or over the counter (OTC). From an essential standpoint, OTC is an exit of liquidity. In terms of using the open market, we will discuss this in detail as follows:

A) LFG reported having purchased (2,684,727,990 UST), representing 23.8% of the total UST supply. Purchasing such an amount in two days should appear on the chart as a spark, even if there was a sell-off, it should absorb it, yet the chart shows a drop in this bar followed by a red bar, "the bar after such a purchase should be green".

The following four charts show the evolution of the liquidity of the four main UST exchanges: 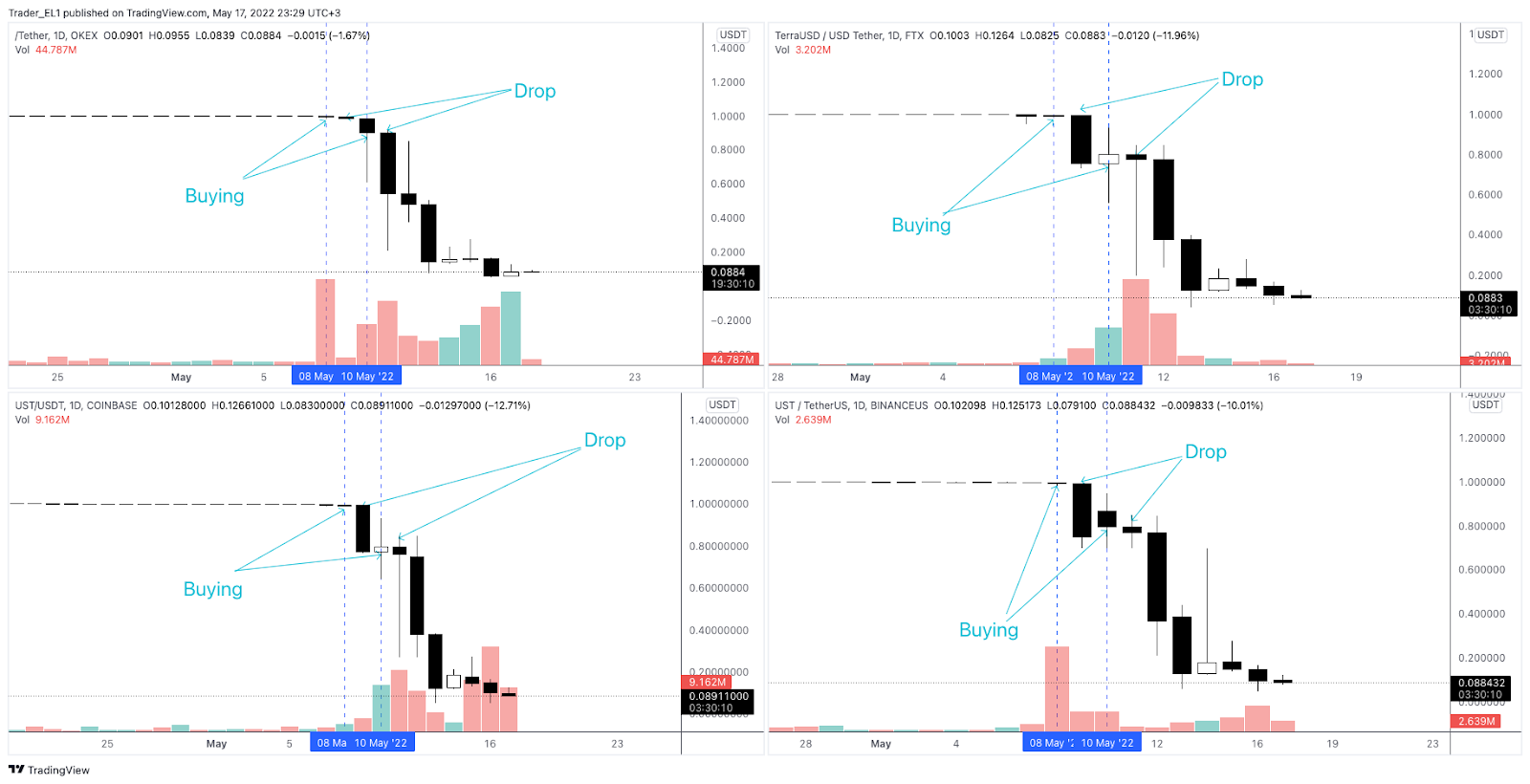 From technical analysis perspective, the red bar after these bars means there was no such a buy.

B). Regarding the sale of BTC "to buy UST", the first purchase took place on 8th of May, technically the bar doesn't show any particular volume change. The increase in volume in that bar was due to the break of the "34413$" support, each bar that breaks a support has an increasing volume due to Stop Loss execution. The next chart shows the normal volume on both volume profile and classic volume for that date: 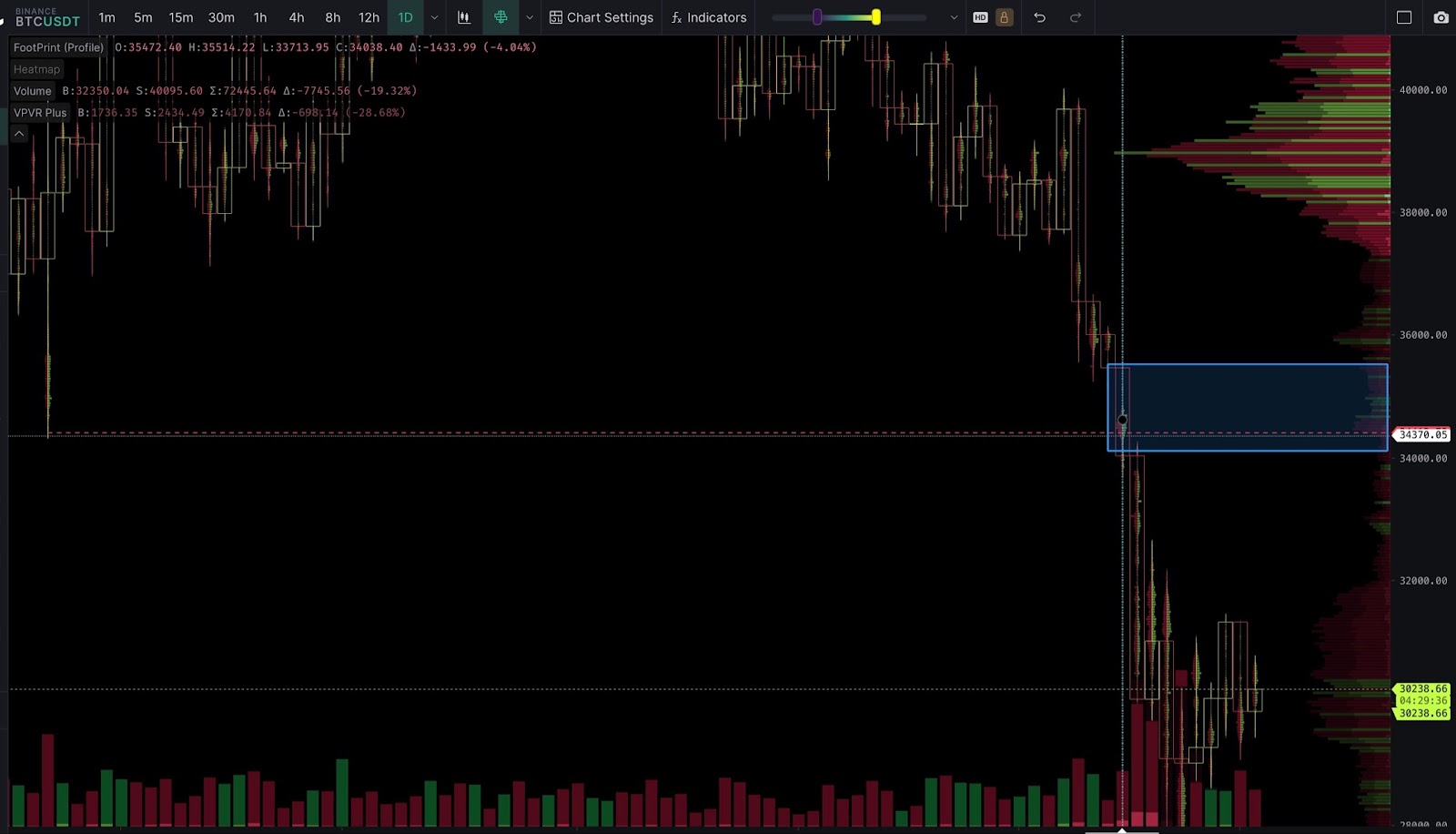 Selling 80 000 BTC within 2 days from a single part should make a significant drop in the chart, yet in May 8 and 10 the total amount of BTC sold worldwide in every exchange was 199.65k BTC, LFG has stated that they have sold half of that volume.

The selling volume on May 8 on all exchanges was 62.02k BTC, the previous days, the volume was 56.4k, 73.77k, and 45.17k. Therefore, there was no increase in volume, which represents a sell of 50k BTC from a single account. The next charts show these data:

Finally, if we take a close look at the total UST chart, we can see a larger drop than the 8th of May drop, yet LFG didn't move any of their reserves at that time, which leads to the question of why they acted quickly this time? The following charts compare both drops: 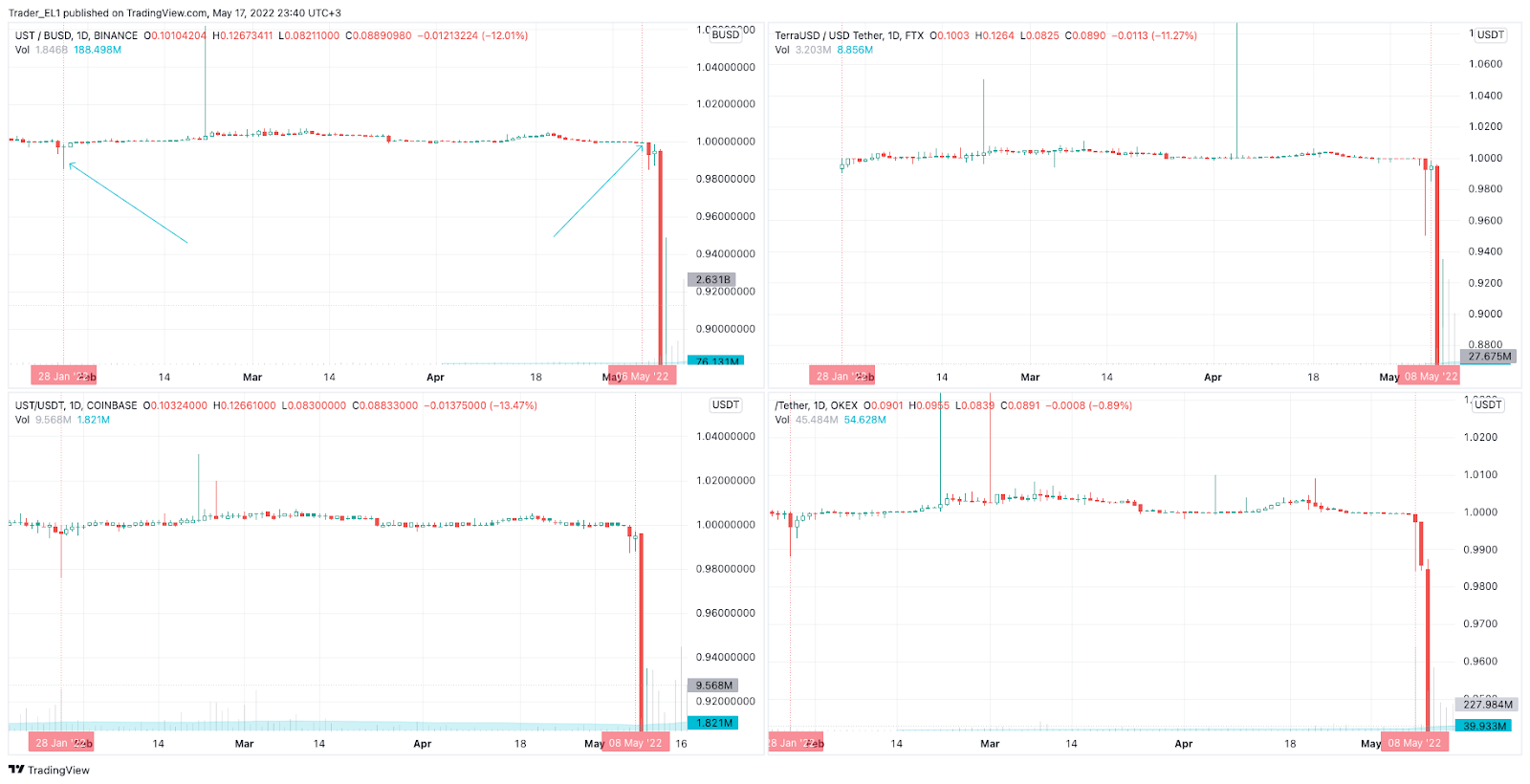 In conclusion, the technical analysis and volume do not show massive buying in UST or a huge BTC selling.

Some Questions That Need to be Clarified

After analyzing the blockchain, it appears that some transactions should be explained by the LFG, for the sake of transparency for the community and investors.

Given the off-chain nature of these transactions and their amount, we strongly recommend the LFG to communicate their purpose and intent. Furthermore, it is unclear how much funds LFG currently has; the dashboard indicates that 1.5 billion were allocated to maintain the UST peg and accumulate BTC, but it is not clear if these funds are available and how they were used during the crash.

What the LFG should do

Considering the elements presented above, we recommend not to proceed with the blockchain hard fork. This action will not solve the current issues and will, instead, lead to split a strong and united community. We would suggest LFG publish in detail the actions that have been taken to maintain the UST peg, as well as the reports of the transactions that have been made on the exchanges. Given the circumstances and the amount involved, the highest level of transparency is required for the sake of the project and its community.

Callisto Team is investigating the issue

Callisto Network is a security organization dedicated to improving the safety of the blockchain industry. We are currently analyzing the accident and we will publish our report to wrap up (1) what happened, (2) what was “officially said” happened, (3) what was done to solve the problem, and (4) what could have been done instead.

Original article by Dexaran can be read here.