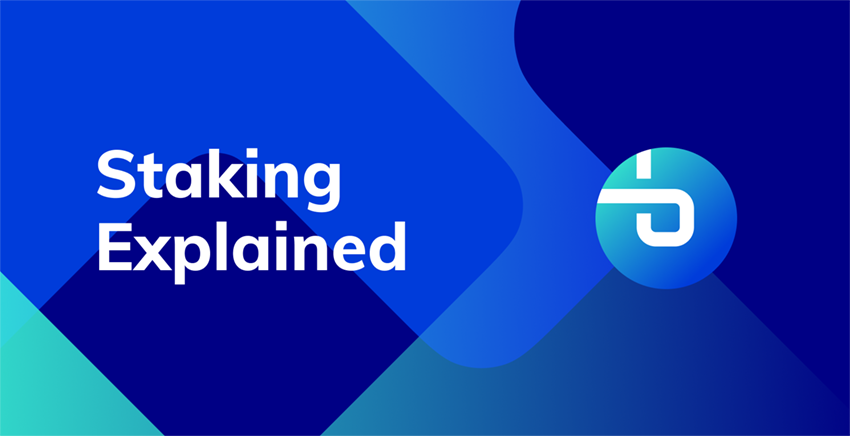 Staking is an integral part of the governance process of the bZxDAO. Staking can be thought of as very similar to delegating votes. When you stake your tokens, you are staking those tokens to an address and empowering them as a representative. Those representatives can then propose and vote on governance proposals. Staking will go live with the re-launch of the platform in late August.

What can you stake?

There are two tokens that can be staked: BZRX and LP/BPT tokens.

When you stake BZRX, it is proposed that you receive a proportionate amount of the fee sharing. For example, if Alice stakes 500 BZRX when there are 1000 BZRX staked, then she is entitled to half of the fees generated by the protocol.

It is proposed that users can also stake LP/BPT tokens by depositing their BZRX into a Uniswap or Balancer pool. Governance will designate one pool address as eligible. Staking LP/BPT tokens can provide rewards in excess of simply staking BZRX. Not only will users earn fees from providing AMM liquidity, but LP/BPT tokens in most circumstances will receive a larger share of the fees than the same underlying BZRX would. This is because any LP/BPT tokens staked are assumed to represent the entire unstaked BZRX supply. This also means that as the staking participation rate approaches 100%, the rewards for staking LP/BPT tokens reaches parity with BZRX tokens.

It is proposed that fees be generated from user interaction with the protocol. These include origination fees, trading fees, and fees collected on interest. Half of these fees will initially go toward the insurance fund until the DAO decides otherwise. To ease the friction of the fees, it is also proposed that generating fees also disburses half the value of BZRX to the generator of the fees. This compensation scheme requires a robust price oracle to prevent the system from being gamed. Without one, the price of BZRX could be artificially manipulated upwards in order to earn rewards in excess of the fees generated, making the system unsustainable. This is why we will use a Chainlink Price Reference Data feed to price BZRX and the rebates. Chainlink’s decentralized oracle infrastructure, high quality data, and security-reviewed node operators fetch and aggregate market data from numerous premium data aggregators. This provides the bZx protocol extensive volume adjusted market coverage across all DEX and CEX trading environments, ultimately arriving at a price feed that is highly available, accurate, and tamper resistant.

The BZRX token has been released in the midst of a “Liquidity Mining” and “Yield Farming” craze. The concept allows crypto holders to earn rewards by passively parking their tokens in different protocols. The bZx protocol is taking a slightly different approach by directing rewards toward active users. Borrowers who pay fees to the bZx protocol will get 50% of their fees returned to them in the form of vBZRX tokens. Additionally, during the first month, 0.5% of the BZRX token supply will be disbursed each week in the form of vBZRX to users based on the quantity of fees generated during that week, with further disbursements determined by governance. This is intended to bootstrap activity on the protocol by compensating early adopters for the risks they bear.

This means that anyone who executes a trade, opens a loan, or keeps a loan open, will begin to accrue ownership of the protocol.

BZRX token holders who stake using BZRX LP tokens will receive a larger proportion of protocol fees than holders who stake using BZRX tokens. This is because fees are distributed proportionally between the indirect BZRX LP staking pool and the direct BZRX staking pool. Staked BZRX LP tokens are assumed to represent the entire unstaked BZRX supply so will nearly always receive proportionally more fees per token. Only in the highly unlikely event that 100% of all BZRX tokens are staked will the reward shares be equal. 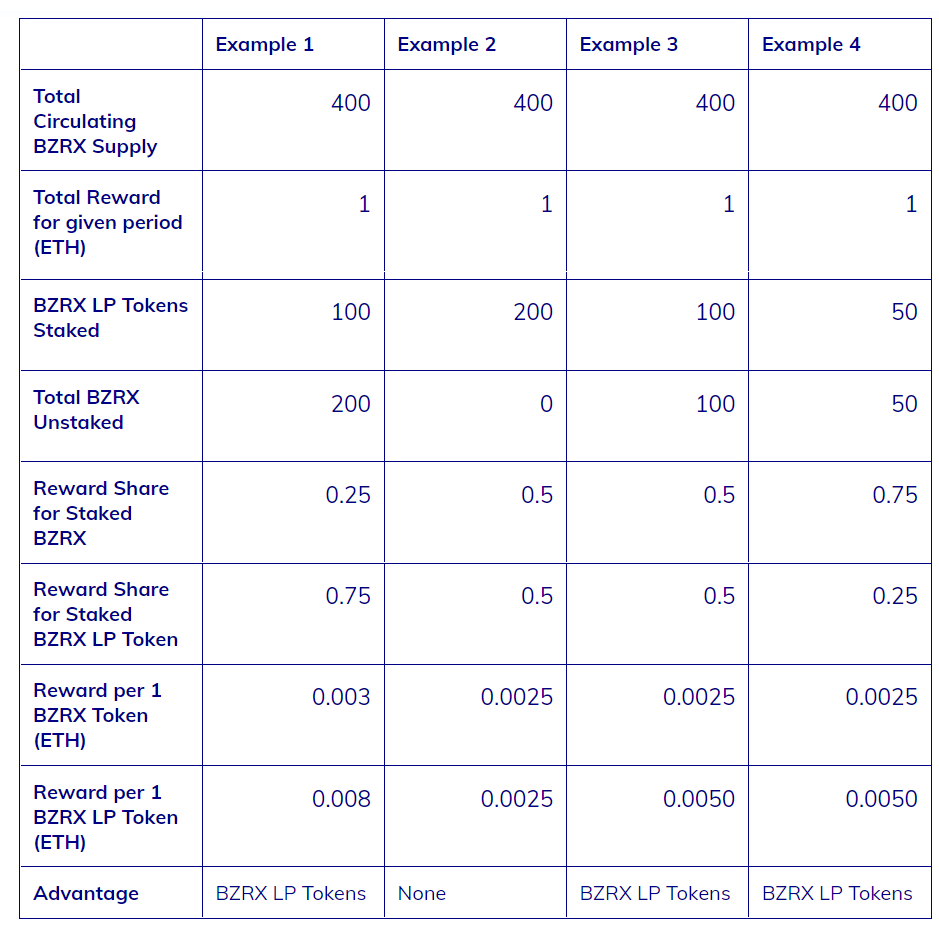 Notice only when every single BZRX token is staked will the reward for staking BZRX tokens and BZRX LP tokens be the same. Otherwise, it will be more profitable to stake BZRX LP tokens.

The BZRX, vBZRX, Balancer LP, and BZRX LP tokens all interact to create a dynamic system of incentives, governance mechanisms, and capital flows. Like everything else in the bZx ecosystem, we strive to maximize ease-of-use and design the best user experience for our community. Staking will be no different. With the bZx Staking Dashboard, you will be able to stake with one click. Unstake with one click. And claim rewards in one click. The dashboard will even let you exchange your vBZRX for BZRX tokens. 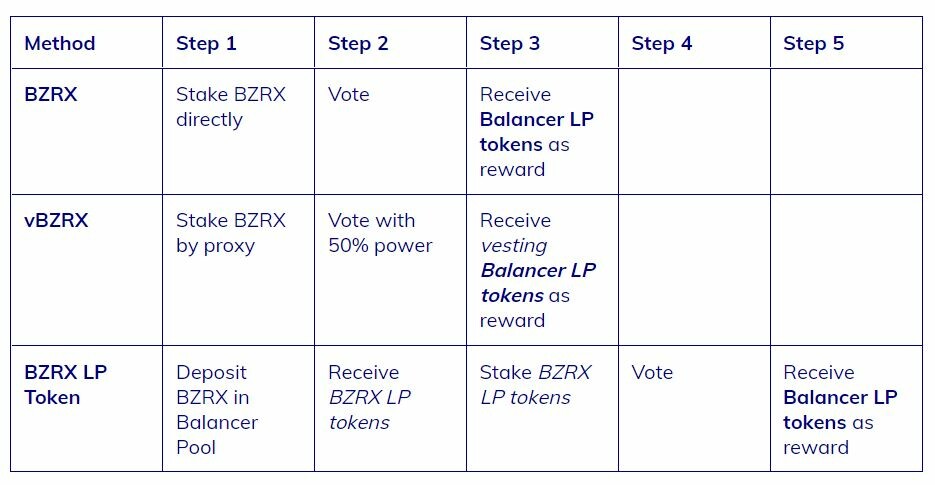 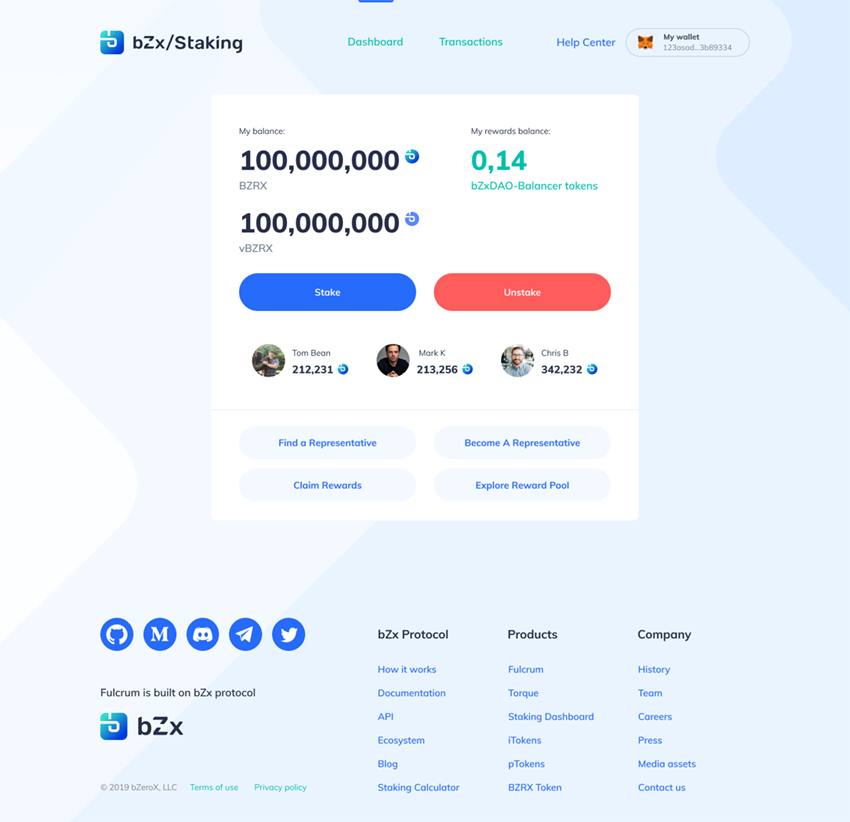 The currently elected representatives will be displayed by default. Simply select which representative you want to support, click “Stake”, and confirm your transaction. If you are satisfied with the performance of one of the existing representatives, that’s all you have to do.

A financial primitive enabling shorting and lending, and borrowing. Integrated with Kyber, 0x, and Chainlink.

A financial primitive enabling shorting and lending, and borrowing. Integrated with Kyber, 0x, and Chainlink.