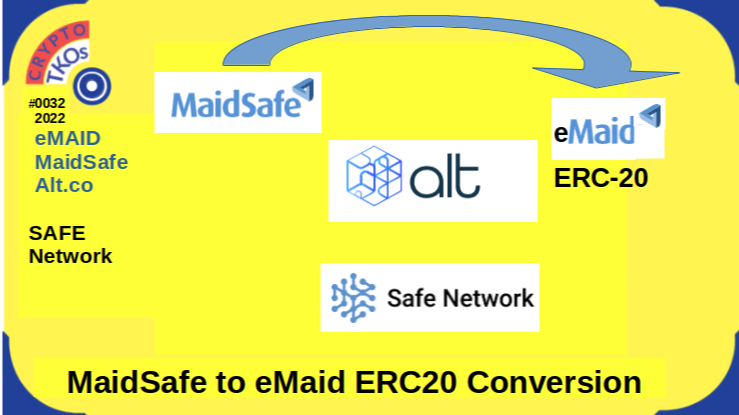 "pass as little or as much of your existing Omni MaidSafeCoins (MAID) as you want to a burn address via a trusted custodian (Altcoinomy). Sending MAID to the burn address automatically triggers the smart contract developed by StakeHound in partnership with Altcoinomy to mint and send eMAID to a wallet of your choice."

Grinding it out, the team at venerable MaidSafe (circa 2015 as crypto and even earlier 2006 when they started), the same folks building the Safe Network have with the above partners enabled the move to ERC20 and the world of EVM SCs.

SAFE Network is being designed by the  dev/test team at Maidsafe(Scotland)  to protect your Web/Internet privacy, encouraging network growth among users by enabling  the safe rental of your excess storage capacity to host encrypted files from anyone wishing to store somehting on the Internet/web. Now the team at Maidsafe has finally joined the world of the ETH Flippening, doing so with eMaid at no risk to their initial investors who purchased Maidsafe tokens on the OMNIcoin blockchain, (Used by Tether as well) as  eMaid can be exchanged for the future Safe coin which powers e-commerce on the Safe Network, one for one.

eMaid, and the use of the ERC-20 protocol token points to the possibility that the Safe Network and upcoming Safe Coin could indeed support smart contracts "SCs" on any ERC20 capable EVM,  for example doing so at scale on  Solana,  which clearly  has the best TPS transaction per second numbers for ERC20 SCs.

A nice move imo,  by the developers and founder David Irvine at Maidsafe.

Going forward expect the MaidSafe  ERC20 eMaid version of their tokens to take some time to materialize in quantity in distributed exchanges and in users wallets (person to person transactions),  as news of the Maidsafe to eMaid conversion capability will take time to disperse through the existing  community of Maidsafe holders, and it will take time for  such users looking to move to eMaid  to figure out their new wallet choices to store their eMaid.

The future is  now much brighter now for the Safe Network.

Which imo, given the latest general bear market move, makes the Maidsafe token a pretty good buy through existing liquidity pairs and exchanges.