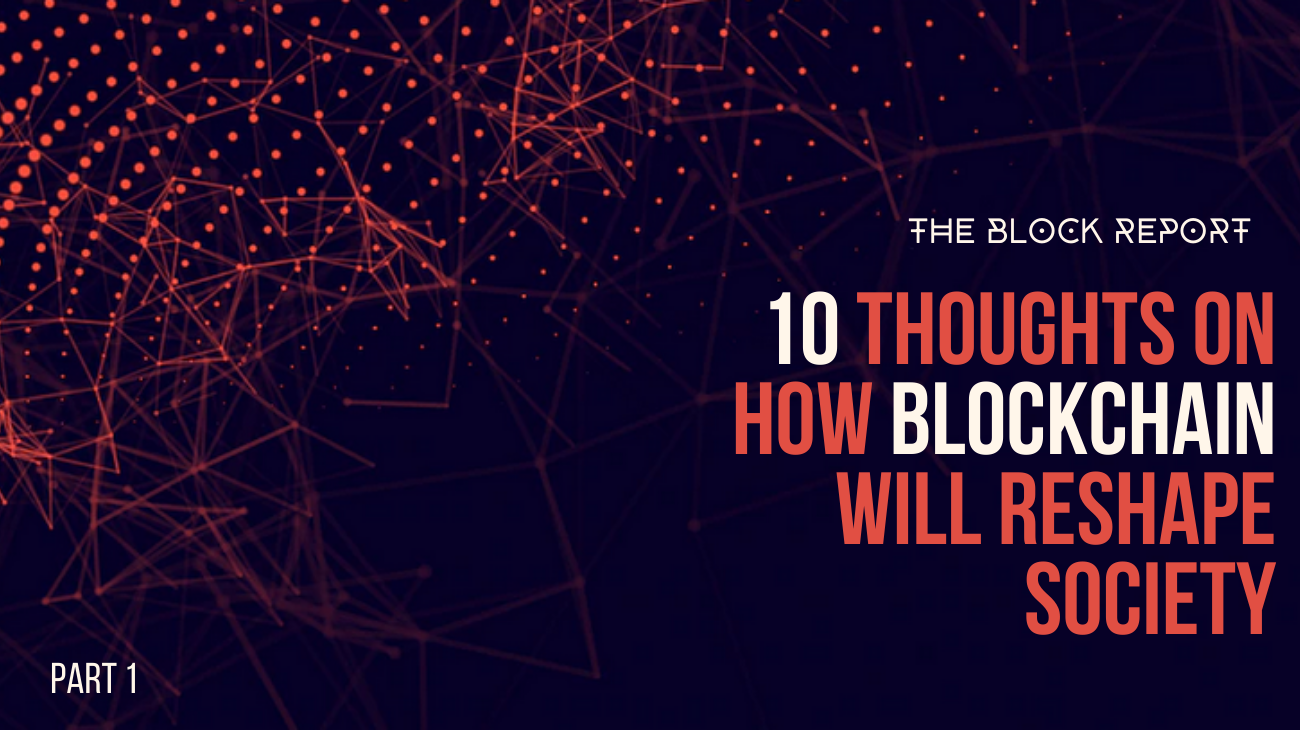 10 Thoughts on How Blockchain Will Reshape Society (Part I)

Hey, guys! This is PART I that will cover the first five of 10 thoughts; PART II will come shortly. I just felt it's better this way to make it more digestible and fun to read. I'll be back soon with Part II. In the meantime, let me know your thoughts! Many thanks. Zed,

Blockchain technology has the potential to revolutionize many aspects of our lives. These are just 10 thoughts on how blockchain will reshape our society. The future is going to be awesome! 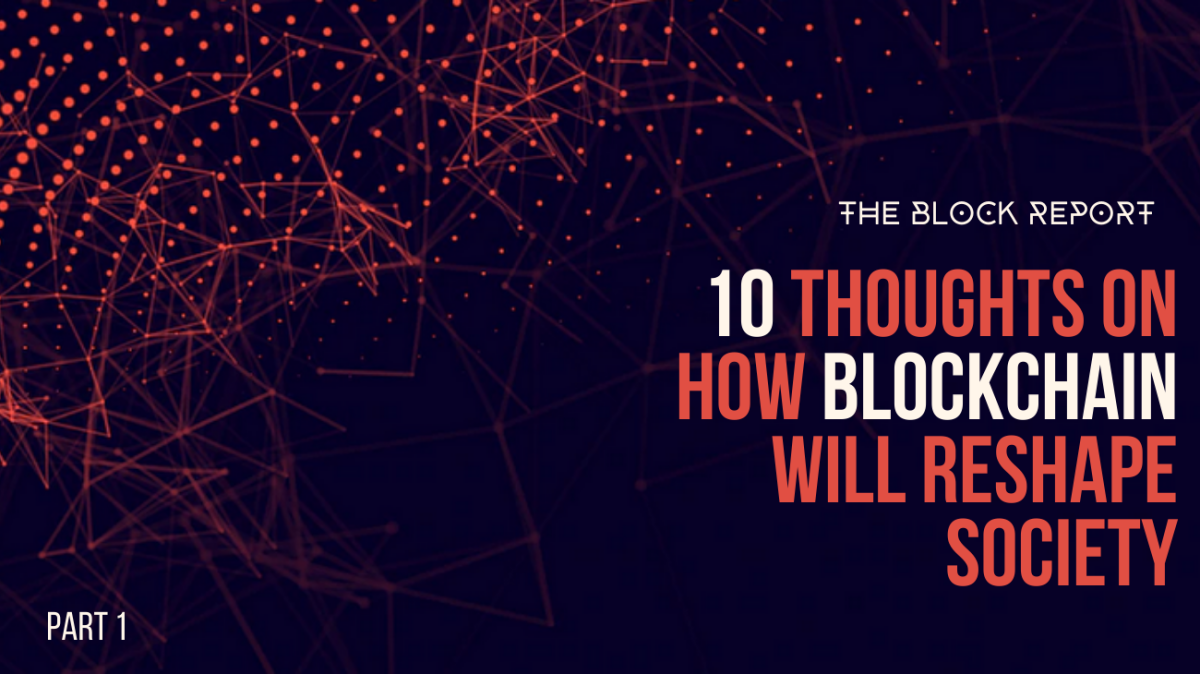 Imagine a world where you have the keys to your money, where millions of people have already verified strangers and where people can lend a small amount of funds (microfinance) to someone in need! This is a world enabled by blockchain technology.

Blockchain has the potential to revolutionize our entire way of living, both economically and socially. It has already proven itself beyond the speculation phase, and is entering mainstream adoption. In the process of popularization, it's easy to forget how prestigious and momentous this technology really is!

I'm a big fan of the growing crypto and blockchain industry. I love that it has created opportunities for entrepreneurs to build their vision, even if their goal was to decentralize or completely disrupt an industry. It's made banking more transparent. And it's given us the opportunity to send funds and make transactions at zero cost by using tokens.

Far from being exhaustive, this article lists 10 ways crypto technology could transform the way we go about our daily life.

1. Blockchain Timestamps Will Be Trusted More Than Notaries 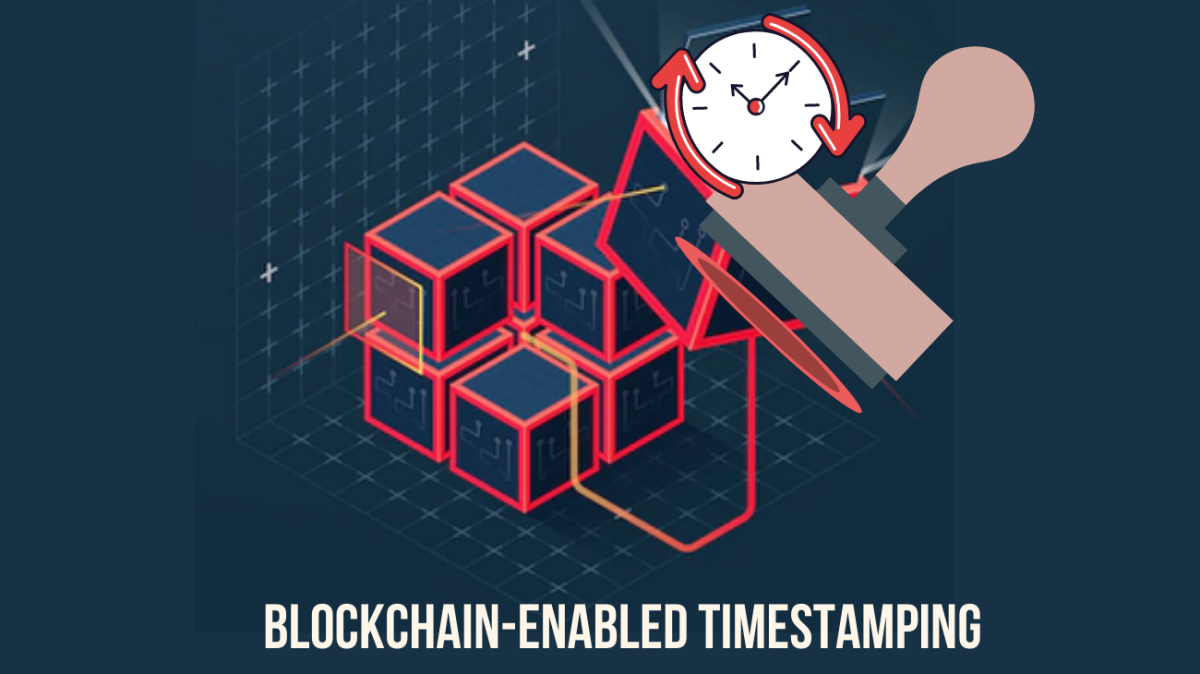 Governments (yuck!) require a notary to make some things official. For example, if you buy a home, you must have the deed notarized and file it with the local government. The problem is that the government charges for this service and the notary is paid by you or your attorney. This is a conflict of interest because the notary wants to keep you as a customer and make more money, so likely (mostly) they won’t tell you about cheaper options.

Blockchain could replace this clunky system because it can timestamp anything at no cost. Of course, you would still need an attorney to prepare the documents, but your attorney wouldn’t have to pay for a notary stamp anymore!

The blockchain is a public ledger that can't be altered. That means it can be used to timestamp documents and prove that they existed at a certain time. This is going to make notaries obsolete, because if you have a document timestamped in a public ledger, you don't need a third party witness anymore to verify that it existed. Smart contracts will do—hussle-free!

The blockchain can be used to write self-executing smart contracts. These are computer programs that run automatically when conditions are met, and they can be used for just about any industry where trusted third parties are required. For example, property title registries could be managed by smart contracts, eliminating the need for property lawyers. 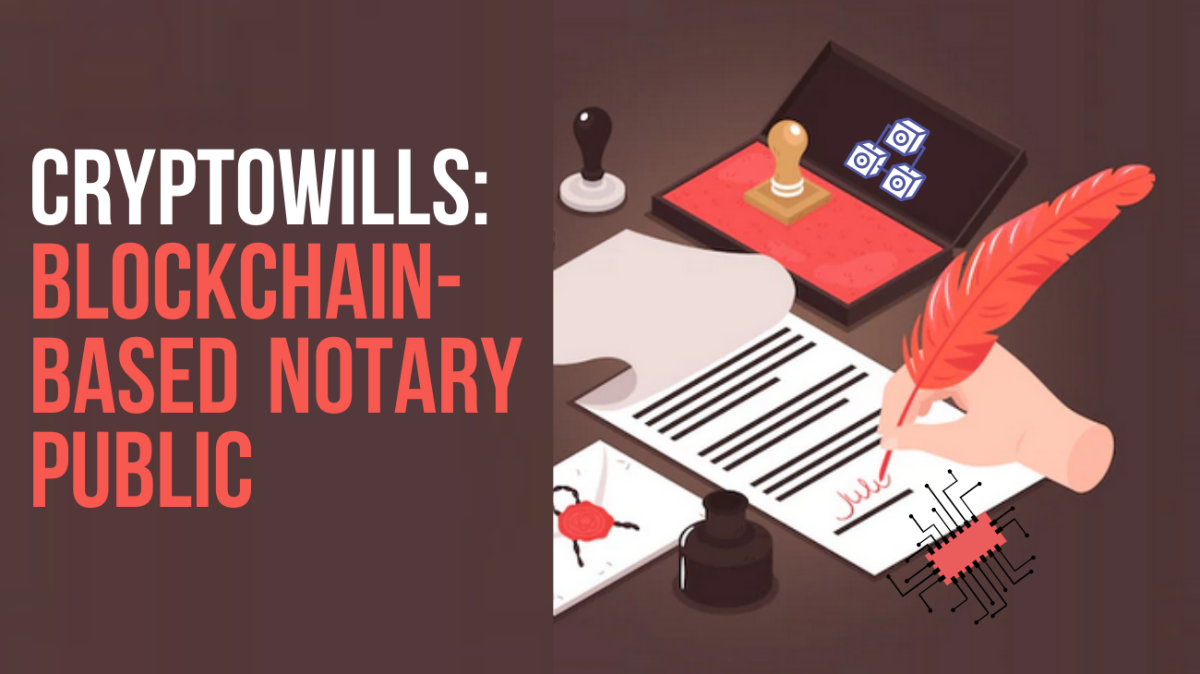 You have probably heard of the many drawn-out, emotionally charged legal battles that arise from untimely deaths and families fighting over inheritance. Blockchain-based wills could help avoid this drama! Once they’re set, they can't be changed.

The blockchain itself is pretty much incorruptible, so once a will is in there, it’s in there permanently and can’t be changed by anyone — not even the person who wrote it. That way, you can ensure that when you die, your wishes will be carried out exactly as you stated, no questions asked!

In the future, blockchain wills could become a legal requirement for certain groups of people. For example, soldiers on military duty may need to have one as proof of who gets their assets in case of death.

A blockchain-based will would guarantee that assets are distributed according to the actual wishes of the deceased, and not the interpretation of an estate management company. Such wills could also enable people to set up trusts for their descendants, for instance, or give money to charity. 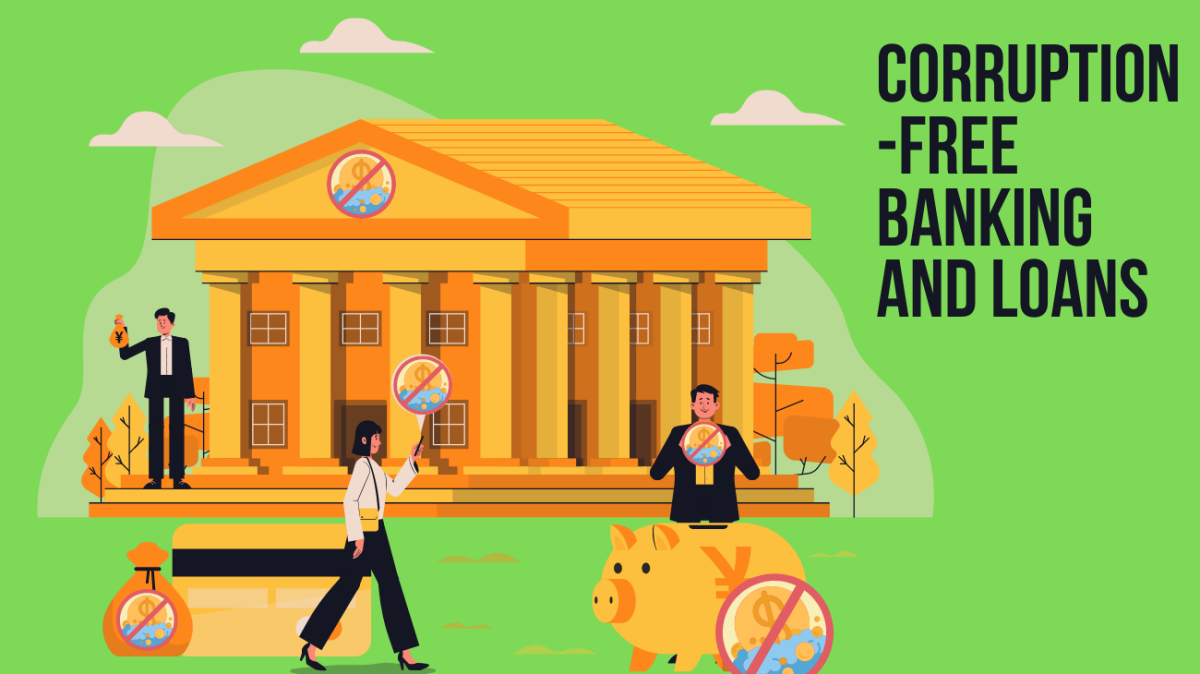 The blockchain revolution will be centered around trust. Trust in traditional financial systems, which is already at an all-time low, has been further eroded by large global financial scandals like the LIBOR scandal (UK), the $2 billion loss at JPMorgan Chase (USA), or the €5 billion loss at Société Générale (France). The public has lost faith in the banking system because of its lack of transparency and accountability.

One of the primary benefits of blockchain technology is the ability to conduct transactions with greater security and transparency. Unlike traditional banking institutions that have been riddled with corruption and financial fraud, blockchain systems can be designed to eliminate these concerns.

Blockchain removes the possibility of corruption from banking because it creates a permanent ledger that cannot be changed or manipulated once a transaction has occurred. This does not just mean fewer scandals; it also means faster, cheaper transactions for customers and less busywork for employees across financial services businesses such as banks and accounting firms.

For example, by leveraging peer-to-peer networks and public ledgers, blockchain systems facilitate a more honest process for conducting loans. Even if the lender is located on a different continent from the borrower, he or she can rest assured that the money will be safely transferred according to the agreed terms of the contract.

In addition, blockchain's unalterable nature allows it to effectively manage customer data. In a traditional bank system, sensitive personal data is vulnerable to hackers who can use it for identity theft scams or other malicious purposes. With blockchain technology, however, banks can ensure customer data remains protected at all times. 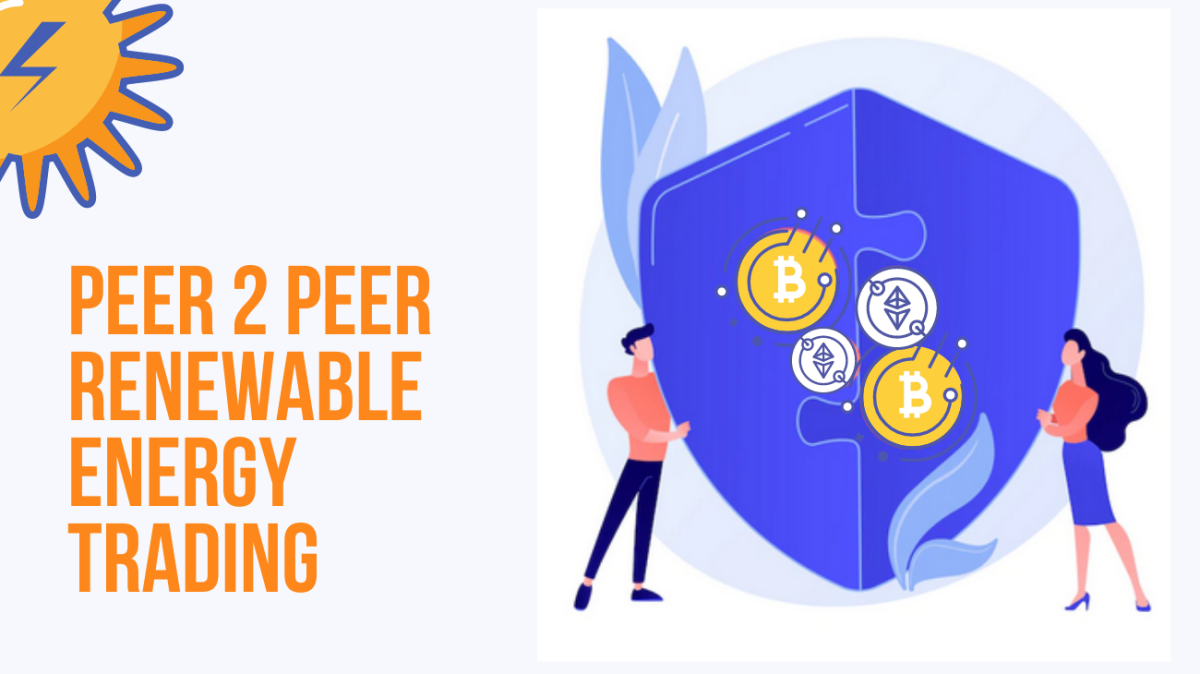 The energy industry is one of the largest and most consolidated industries in the world. It has historically been dominated by a small set of large fossil fuel companies. The production, distribution and consumption of energy have remained largely unchanged for decades.

Until now! It seems to be only a matter of time before blockchain transforms the energy sector as we know it.

We are at the dawn of a new era where homeowners will be able to generate their own renewable energy and use blockchain technology to trade clean power with each other on a peer-to-peer basis. Let's say you have a solar panel farm which produces more energy than you need. With your excess energy, you can sell it directly to your neighbor without having to go through any third party (in fact, there does not even need to be a middleman like an electric company). Such a smart-grid system would ignite competition in the marketplace and lower prices for products and services.

This is going to create huge positive disruption in the energy market as we know it today. It will allow solar panels and battery systems to become more affordable, more transparent and more accessible. It will lead to a transition towards more sustainable and environmentally friendly energy production and consumption patterns.

What if we could democratize energy production in a way that puts consumers in control? What if we could use blockchain technology to create an energy marketplace where everyone can participate? This would literally decentralize power away from monopolistic corporations who don’t give two hoots about people or planet and instead empower individuals with an easy way to produce clean renewable energy and make money while doing it. 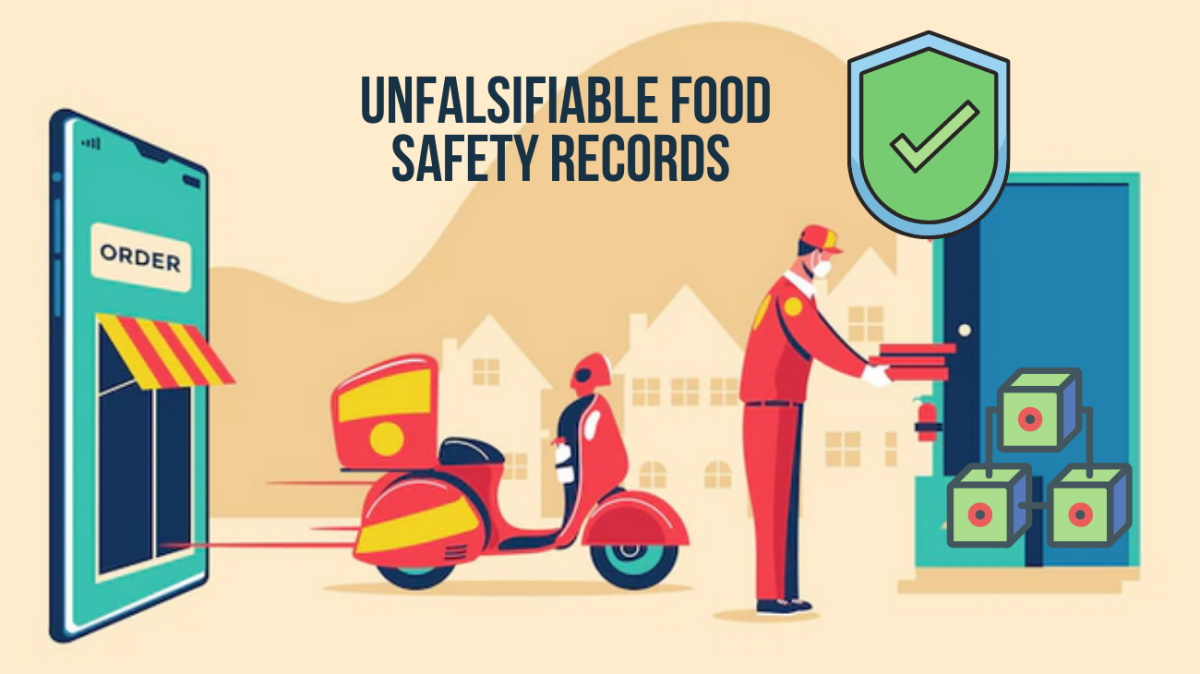 Imagine that you could go on the Internet, enter your favorite restaurant and see all the food safety records of every ingredient in every dish you’d ever ordered there — including information about which farm it came from and when it was harvested.

That's what blockchain could make possible!

In China, IBM is working with Walmart to use blockchain to improve food safety. The retailers say they could cut the time needed to track produce from its supply chain to 2.2 seconds using blockchain technology, down from days or even weeks before.

Leveraging blockchain technology will allow food suppliers to track their products back to the exact farm where they were produced. This means that if there is a food-borne illness outbreak, it can be traced faster and more accurately, which is good news for both public health and reducing long-term costs.

The potential of this technology is not limited to the agriculture industry. Any food supply chain that needs to track information about where items are coming from and how they are handled could use this technology.

Call me Zed! I'm an author of fiction and nonfiction, blog writer and web content creator. As an author of nonfiction, I cover an eclectic range of topics: AI, astronomy, astrophysics, blockchain, quantum computing, social media marketing, to name a few.

Welcome to the Block Report! This is a community-driven news and analysis blog that chronicles the development of blockchain technology, its real world applications, and how it will revolutionize socio-economic aspects of our life. We document the disruption that crypto tech promises, looking at both developing circumstances and future projections on blockchain. We keep an eye on what's going on in the world of crypto, interesting ideas and which crypto-powered solutions to look out for. Have a good read!