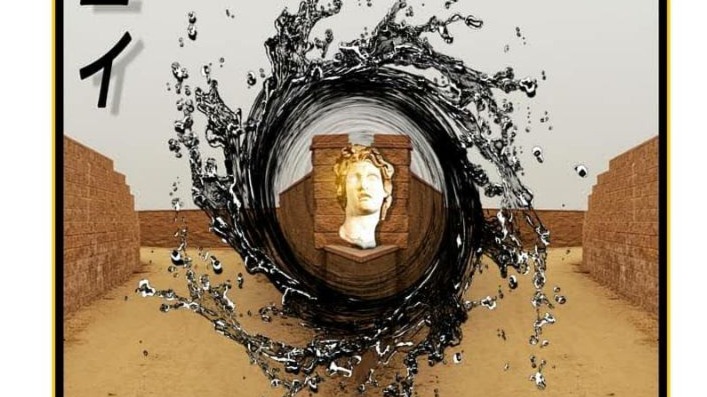 Surface impact was sudden and fast . With all of the intensity of an atom bomb up until the very last moment when touch down occurred with as much force as a burning ember riding an updraft . I sat up as if waking from a nightmare immediately forgotten, yet I could not dismiss the sensation of bridging the gap of time so easily. I lifted my arms and looked at my hands . The suit worked in complete tandem with my subconscious thought. We conquered the subconsciousness as a race long ago, its pockets of ill thought in repressed memories a thing of the past. The word past lingering in my mind as it did not hold the same impact given my current surroundings . I pressed my fingers against the ground. The surface felt hard beneath a thin muddy layer the texture similar to facial cosmetic powder of an antiquarian variety. The color of tapioca milk tea. Wide clear pools of water dotted the landscape , the surface of , so still as to resemble glass. These pools appeared no more in depth than 3 inches or so. Of fauna there was but scant few dotting the landscape. In this case it was a type of Club Moss , bright green in appearance almost glowing against the muddy backdrop of light browns and orange bacterial mats that crowned the pools . This bacteria led me to suspect that these pools were not so shallow after all and merely gave off the impression of minimal depth. In the distance, beneath a deep gray sky that promised storms, was a massive bright white cloud covering. It nested upon what appeared to be deep black volcanic mounds , their silhouettes hunched over barely visible in the white glow. A small blood red salamander no bigger that my finger swam to the edge of the pool nearest me only before dipping under the orange curdled Bacteria. A hot wind kicked up and pressed against my face guard. The hardware I inhabited permitted for sensory simulation. If I had eyes , they would of watered.

There was an electrical energy in the air that made it hard not to feel a sense of growing child-like exhilaration that was rare. I recalled forgotten memories, the sun shining through leaves revealing the inner veins, tiny black lighting bolts frozen in a moment. The foliage creating a sparkling effect as they waved at the blue sky . I held my grandfather's calloused hand. My reverie was broken by the static of hot steam spewing forth- sizzling the white cloud which I now saw to be a mist forever sentenced to shelter the fumaroles that inhabited it. Open wounds in the earth like mouths proclaiming existence to an unseen sky beyond storm grey canopy.

Everything that was visible as well as invisible, before me was recorded into the internal blockchain memory of my virtual cerebral interface as to prevent any involuntary alterations as when solely using the outdated soul consciousness record. The human consciousness will selectively alter what is perceived if a given image/occurrence proves to pose a potential psychological hazard to the silwnt witness.

I decided to head towards the direction of the mist and it volcanic seat to the north stopping to study a cluster of three to four inch tall club moss , known also as 'rats foot' for the resemblance in it's stems. The moss was a vibrant green that pressed up against my vision. I could of sat there and explored the cavernous structure the made up the physical nature of the tiny plant for hours as the sensation of urgency one grows accustomed to in the time I departed from had abandoned me . As a matter of fact, I did not even realize said sense of urgency until my complete and utter removal from my original timeline. In an age that was so far regressed from the degeneration of the twentieth century , we prided ourselves in a lack of time based anxiety . Yet here and now , I found that we are a counterfeit impersonation at best. This open world with horizons ad infinitum and a deep sky that threatened to devour you whole so new in its age had no need to express concern for historical passage. After all, was I not the sole embassador to the kingdom of memory ? For was not until now the recollection of existence non-existent? With no one there to define the passage of the sun , had Apollo yet to complete his first voyage by chariot?

I finally released the plant from my grip , stood up and scanning the horizon.. for what? I do not know , I continued to the fumaroles hissing in the enclosing distance. My legs vanished beneath a thin layer of sand that poured across the ground in waves of golden flakes , carried along a half foot high above the soles of my boots, I wanted to look down into it.

Black porous rock , jagged and reflective . This is what I mistook at a distance for volcanic rock. Although these shards of what appeared to be obsidian , emerged like a giant predator's teeth from an ashen pearl earth. Of all sizes, fixed in every direction skyward in defiance of anything beyond its misty enclosure . Sediment gave off an opalescent shine of turquoise and pink with blues powdered atop pure whitish grey ash. I treaded carefully up the mounds of stone and ash. The first smallest of the mound's peaks about eight feet up was crowned by the first blue hot fumerole, like sundried skulls adorned with smoking exit wounds revealing electric blues with hazel glows framed in the moss of orange and canary yellows like the love tap from a high caliber round. It was entrancing in it's beautiful unfamiliarity.

The pool of water bubbled and popped as small gusts of steam so fine in the thick atmosphere to have a subtle buoyancy. This steam joined the larger atmospheric body that encased this mount of hills.

I reached the zenith of a much larger mound similar in structure ash , sediment and obsidian. The height had now deserted from view its base for even though I had not ascended to any notable peak , the haze refused to yield anything below a foot below me . Merely fading into pure white . I could not see a horizon , I could not even see the outline of the surrounding mounds . What I could see was the sharp shadows of stone drunkenly standing every which way and that in crude groupings, smaller rocks becoming floating black misshapen spheres. This lack of ground gave way to a lack of gravitational sensations , I tensed what the suit told me were my leg and foot muscles. This in an attempt to regain my sense of balance. In this complete absence of color my attention was brought upon a particular location directly in front of me (was I falling ?) This spot no larger in height than myself was of a lack of hue even more so than all other. How this was possible to perceive this level of bone-washed white against once only momentarily ago, blanched alabaster atmosphere of by the very same definition? If I was indeed falling , the exo-suit may or may not withstand puncture by obsidian but would surely succumb to the Boiling water of the fumerole pools if I happened by misfortune to find myself submerged in one. Despite this eminent danger , I could not take my vision off of the particular spot, the air almost looked heavier. It was as if the spot held me in place with its mere presence . The sensation of holding the gaze of a massive predatory grey wolf seconds before being devoured was the thought that came to mind. A slightly enveloping inwardly location in my vision , billowing empty cascading in on itself barely a perception of movement more so a suggestion of movement. My focus becoming tunnel vision my auditory senses picking up a gradual carbonated sound like a million bubbles collectively hissing , their pops and bursts combusting the oxygen around them.

I was running full sprint down the ashen hill kicking up shards of black rock . I came dangerously close to having my left arm removed by a severely thin yet tall sliver of dark monolithic rock barely visible from my descending direction. Only thru sheer momentum of my velocity did i not smash down end over end for I had not yet recovered from the weightless sensation of that haunted sky.

Start from the very bottom!! A Sci-Fi short story I am working on involving time traveling to the late Devonian Period of earth's history. Eventually this will be published in tangible form irl.