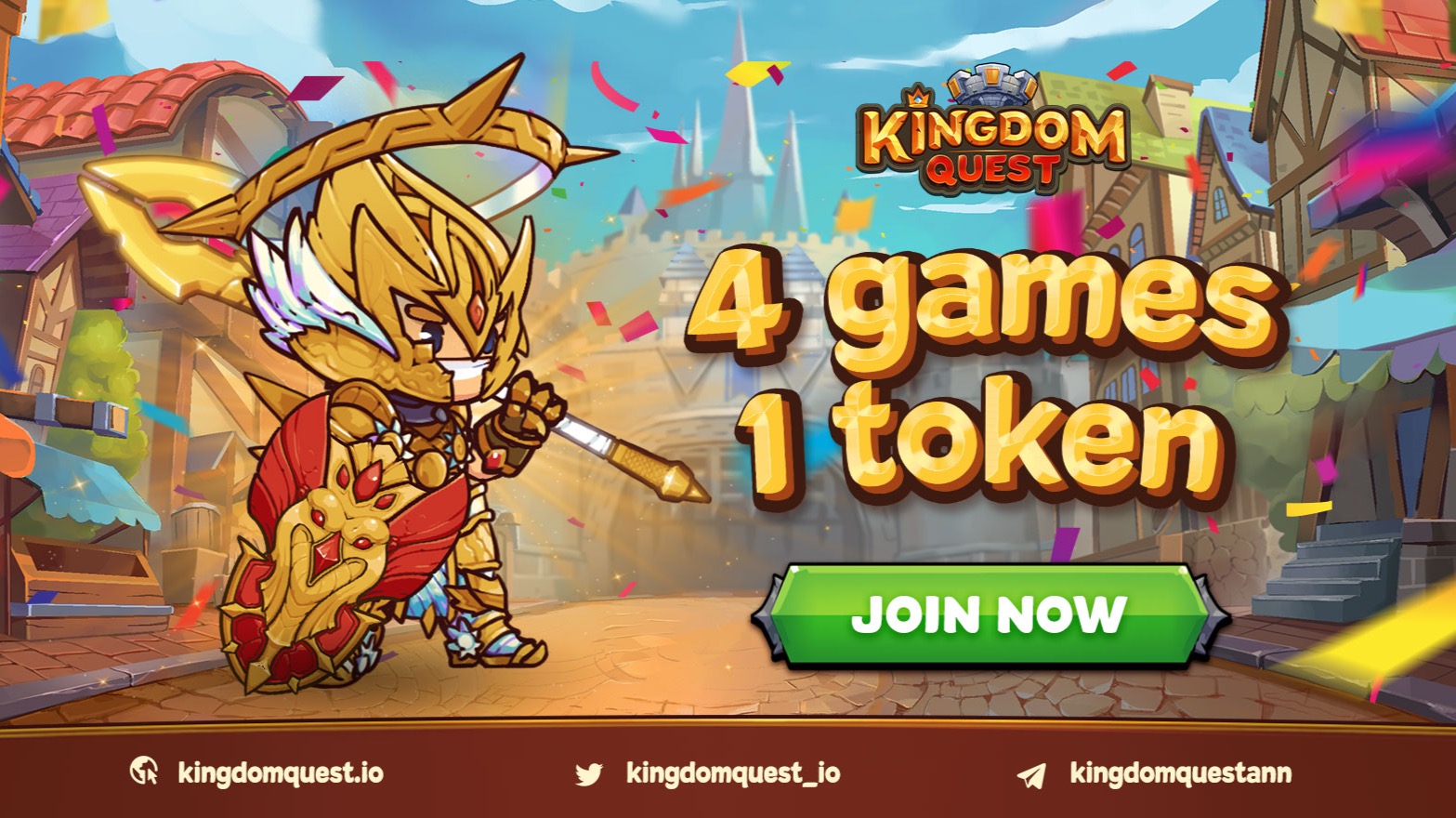 Metaverse has grown up to be one of the most buzz-making concepts on the news headlines today. The first signal of the upcoming massive change that is about to erupt industry-wise became the increasing emphasis tech giants are placing in the virtual environments. The shift to the fully-immersive digital spaces is meant to facilitate a long-lasting strategy of dominance big tech has been employing for decades – as well as give us a hint on what the reality of work and entertainment is going to look like very soon. However, this recently-born investment interest only reaffirms the general paradigm of the data-fueled future that is bound to be virtual.

As the interest heats up, the new projects are increasingly conquering the yet poorly-explored terrain. Among them is Kingdom Quest – the gaming platform that builds its proposition around the forthcoming technological shift to Metaverse that already takes ground within Decentralized Finance (DeFi). While employing the newest technological foundation of blockchain, this decentralized platform hosts the opportunities barely experienced in gaming before, such as the Play-to-Earn mechanism, NFT collectibles as well as rich KGC token rewards, all collectively falling under the umbrella of "4 game - 1 token" ecosystem. Kingdom Quest is a casual-game bundle absorbing blockchain technology. With the Enjoy And Earn model combining Play-Own-Earn and Free-to-Play, Kingdom Quest players can experience various game titles within an ecosystem that shares a native token and NFTs, in-game assets can be exchanged among games to perform tasks and missions. Altogether, the concept of Metaverse Universe designed by Kingdom Quest marks a revolutionary change in the gaming industry, the one that jumps at the forefront of innovation through exploring the paths hitherto unknown.

In anticipation of the forthcoming industry change, I had a meet up with Mr. Dat Le - the CEO of Kingdom Quest to talk about the technological trends and find out how those already find a place within the gaming platform.

To begin with, what prompted your decision to come up with a game entirely based on blockchain technology? Why does this technological basis seem particularly attractive these days?

When I was a kid, I always imagined a world of my own making. For me, gaming is more than a hobby, it's a passion. That's why I entered this market very early. Although I have participated in the development of some quite successful games like 1945: Airforce with more than 100 million downloads, I still feel I am not satisfied. The development of Blockchain technology and the Metaverse trend was born as a leap that brought me closer to my ambition in realizing a virtual but highly interactive world. This era offers users to truly be part of an ecosystem with intuitive two-way interactions.

Having in mind your ambition to grow up in the gaming ecosystem, would require a significant amount of support. Who were the partners that enabled the progress of Kingdom Quest?

We are honored to have the truly passionate partners in technology: Icetea Labs, Shima Capital, Sotatek and Gamefi.org. The improvement of our in-game NFTs also received the advice and companionship of HuobiNFT. In addition, partners in the Avalanche ecosystem such as Islander, Trader Joe, and Kalao also bring many positive values ​​to the development of the Kingdom Quest ecosystem.

What would you list as the main components of the Kingdom Quest?

I don't consider other Gamefis on the market as my competition. Instead, the emergence of the traditional game industry with blockchain technology is accelerating the process of educating users.

Some people might see our biggest competitor right now is the bear market. However, my colleagues and I always believe that the downtrend is a great opportunity for the market to purge, retain sustainable projects, and pose challenges for developers in perfecting the in-game economy.

What role is allotted to the community within Kingdom Quest? In particular, how can they benefit from the KGC token rewards?

Kingdom Quest is not a game title, but an entire series of casual game titles. Our ecosystem uses a so-called “4 games – 1 token” approach, meaning that KGC can be used in every game within the bundle. Currently, you can find specific KGC utilities including:

Governance: KGC holders can take part in the decision-making process on the development of Kingdom Quest products by voting for game-changing, monitoring for the transparency of in-game activity, community treasury distribution ratio…

Crafting and unlocking NFTs: KGC is used as a fee for players to merge NFTs from NFT shards received during gameplay, as well as unlock locked items.

In-game activity and fee: Players can use KGC to purchase in-game items and energy, enhance heroes, upgrade skills and participate in special events.

Purchasing: KGC will be used for trading NFTs and in-game assets on the marketplace

Staking: Owners of KGC can “stake” them to earn interest, limited NFTs, perks, and privileges.

Could you tell a few words about the characters of the game, as well as their rarity?

The Kingdom Quest world, heroes and other asset are crafted by a team of talented artists. NFTs and in-game assets are used in various games with stand-alone features that create interaction in the ecosystem and maximize the NFT utility.

In the immediate future, users can buy NFTs heroes that were opened for sale during the successful INO in April, or participate in the special box sale with limited NFTs that will take place in September. These NFTs can be used right in Kingdom Quest: The Beginning - our first game will be mainnet nextmonth.

NFTs are ranked with 4 rarities: Common, Rare, Epic and Legendary and 2 hidden ranks waiting for users to discover. The higher rarity, the better status the NFTs will have. In addition, with Hero NFTs are also classified by class including Warrior, Mage and Assassin with different strengths.

In anticipation of the future release of 3 other games within Kingdom Universe, could you say a few words on how those differ in their essence? What are its main features?

The games in our ecosystem are in the Casual Game genre - the genre that attracts the most players on the market today. Unlike other game genres, Casual Games are not really designed for gamers, but are mostly consumed by ordinary users. With its easy-to-access, easy-to-play features, Casual Game owns a large user base in all segments. That is also why Kingdom Quest has carefully planned the games in its ecosystem. We create a world where everyone can find a game they love.

After Kingdom Quest the Beginning is mainnet on this September, the next games will be released. Forgotten Waterworld is a farming game for players who like breeding and accumulating assets. The vast Claudia belongs to the genre of MMORPG and Defense of the Heroes will be a Tower Defense game as Bloons TD or Dungeon Defenders.

How do you estimate the success of your gaming enterprise so far? What piece of advice could you give to all new starters in this area?

We never considered our project a success or finisher, because it means stopping. We continuously set milestones and strive to achieve them. Up to now, we have conducted three Beta Tests with thousands of users participating in the experience and providing comments. Our first INO also achieved great results when it sold out on Huobi NFT and Gamefi.org within 2 hours. Our next target will be IDO, mainnet, and the next titles to launch.

In my opinion, new entrants in this field have many advantages, because the picture is somewhat contoured after the last 2 years of rapid development. Of course, this is a long road that requires persistence, perseverance, and flexibility. We all have to accept reality that it will take time for users to adapt to new technology as well as technologies and hardware themselves perfect and become ubiquitous. So the most important thing is to find a way to survive.

And to conclude – what is coming up next for Kingdom Quest?

We are pleased to announce the IDO round of August 19 on the launchpads: PoolZ, DoDo Dex, True PnL, Paragen and MetaverseStarter. Right after that, in September we will conduct Kingdom Quest the Beginning mainnet and launch Special NFT Sale.

Later this year, we will introduce the beta version of the next title in the bundle.