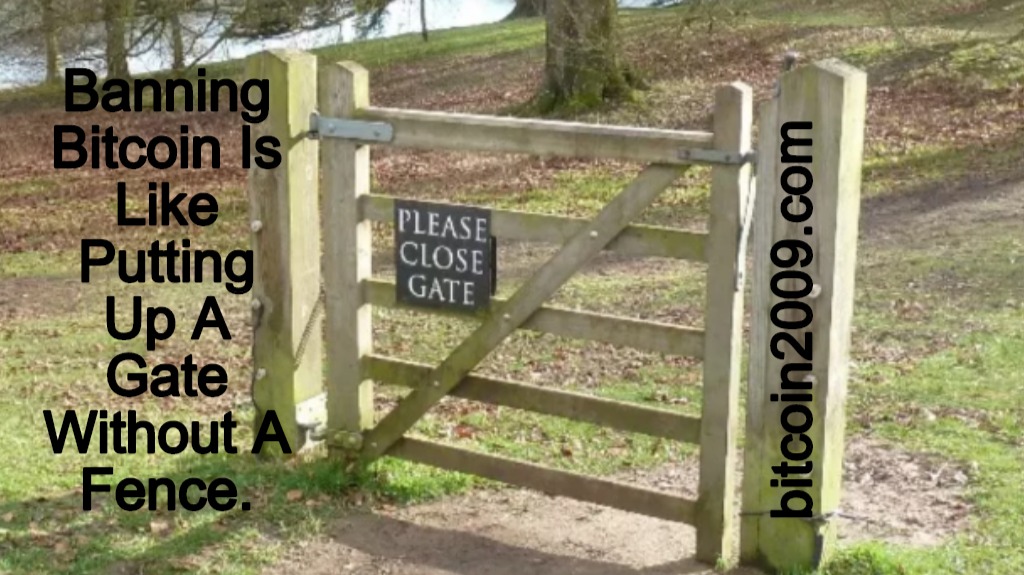 Banning Bitcoin Is Like Putting Up A Gate Without A Fence.

UK watchdog bans Bitcoin-based products for retail investors - This is propaganda in my opinion. Their argument for this ban: investors are losing too much money. I personally think this is just to deter people from adopting/trading Bitcoin. A lot more people around the world are becoming attracted to this space, there is a lot of opportunity here for a good solid career outside of the traditional financial system. Governments are going to use every tactic under the sun in order to keep control of their citizens. They need you to use the government money, otherwise they lose power. This whole KYC/AML charade is dangerous & ineffective. Giving random exchanges/platforms all your data, is straight up asking for problems. Your identity should be protected, it forms part of your freedom as a human being.

Ask yourself this: how many times have you used cash without handing over your identity? They want to move to a system that is centralized and easy to audit - for control & taxation. They're trying to subtly destroy & undermine all the technological benefits of Bitcoin with taxes/regulation. We need to start voting for political parties who end this madness - take a stand. I urge you also - take back your Bitcoin privacy with Coinjoin/Lightning. This kind of behavior simply strips you of your rights - it's gone beyond taxation. There are many exchanges without KYC, I'm betting people will just continue to use them. In this instance, people in the UK will simply use a VPN to leap-frog laws. Banning Bitcoin in any form is extremely costly & near impossible to enforce. It's really just a scare tactic, however the indirect threats will get far worse unfortunately. This is a crime against humanity- this isn't a conspiracy theory. On top of this, the wheels are beginning to fall off the COVID narrative in regards to PCR testing, there's too much evidence of deception & corruption now - buying Bitcoin is your vote for a better world.

Bitcoin Bull John McAfee Arrested In Spain, Sued By SEC For Misleading Cryptocurrency Promotion - I find John McAfee entertaining, but this isn't surprising. He definitely put a target on his head. The amount of crypto-scam projects he's released over the past few years is a little ridiculous. Still, it should be a free market; he should be able to do whatever he likes. If you fall for it, you'll only become wiser & less gullible. Regardless, he does have balls and he's not afraid to speak his mind; so I admire that about him.

This is all part of the government crack down on Bitcoin & crypto. He's got 1m followers on Twitter & he's advising people to break the law; they're probably going to go for the biggest influencers first. The double standards though; governments are breaking laws & constitutions all over the world. The majority are unfortunately blind sheep & believe everything they're doing is completely ethical. They believe everything in the media. You never hear a politician explain how the money system actually works - this is because it would start riots. You don't hear them properly debate a "conspiracy theory" and provide hard evidence. They simply put you in cuffs. Read between the lines.

We're going to see more an more of the above. They're going to make examples of more companies & individuals. Brace yourself.

Be like Brett. Brett understands the value of Bitcoin.