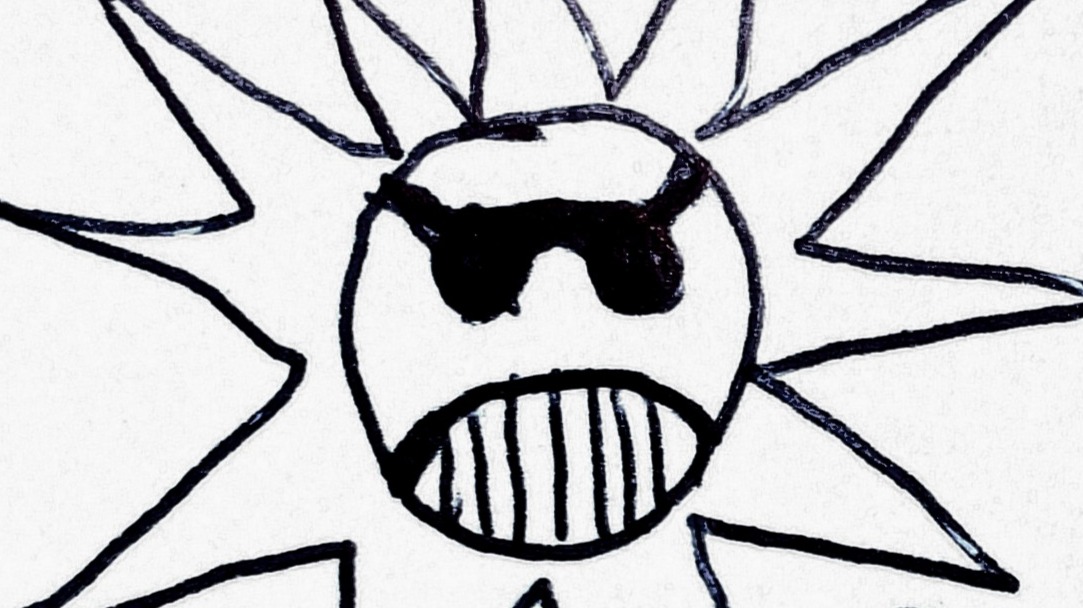 [I wrote this piece last night while lying in bed, but I couldn't POST it because the phone app I was using was having "connection errors." I hope being posted in the morning instead of at night doesn't diminish the content, but if it does, SO BE IT. The piece is finally posted, though late, and I can live with that... ---rfy]

Did you know that Thursday is named after Thor, God of Thunder? True! (Here's a Wiki to explore, if you are so inclined... Etymology is fascinating---to me...) 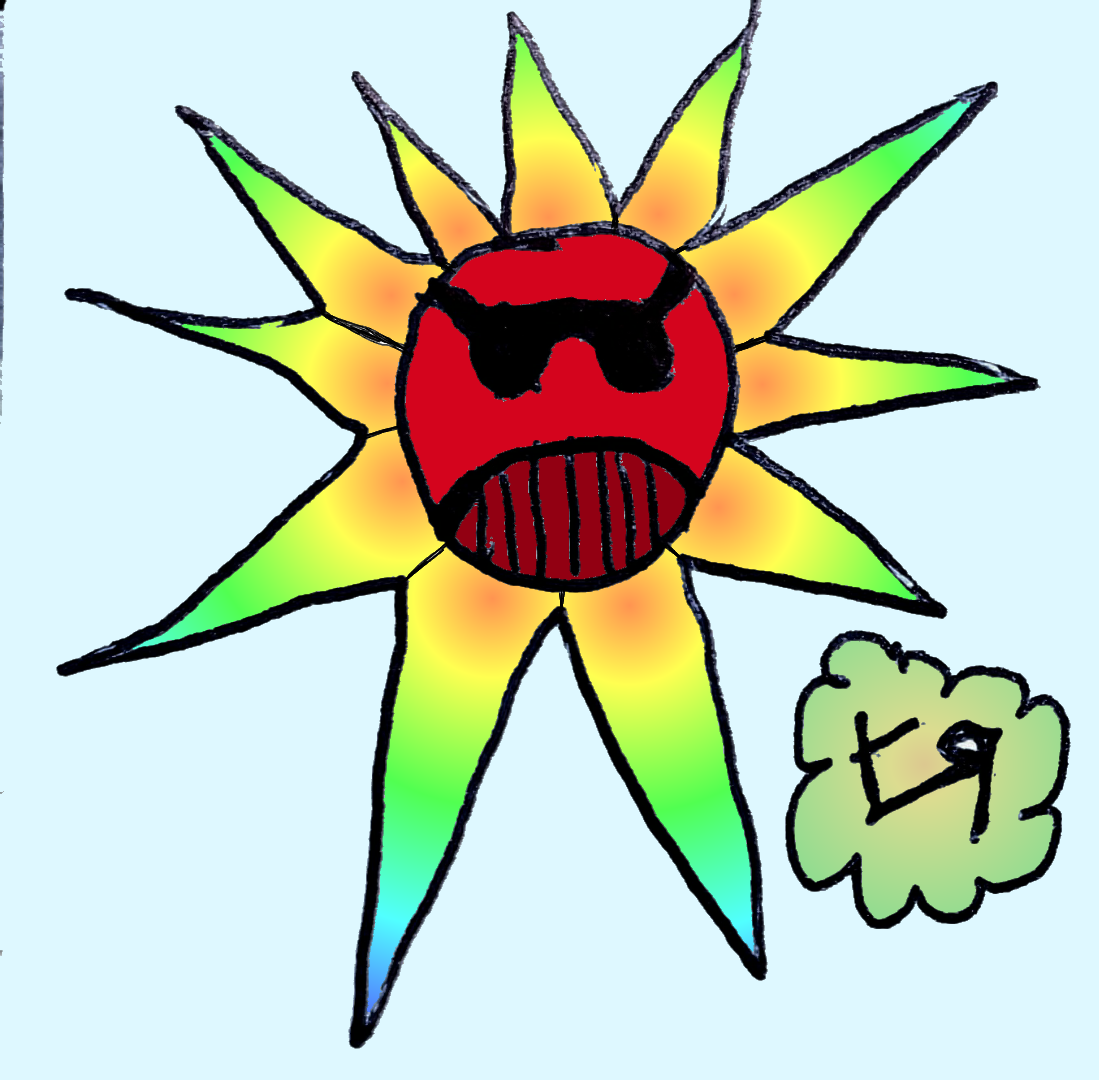 [Ink on notebook page with digital embellishments and color. 2020. A little sketch I made on my lunchbreak at work today, then colored with my phone.]

Time for another end of the day breakdown... A WRITTEN breakdown, not a psychological one. The writing helps keep the Anxiety Demons at bay!

Still protests going on in the tiny, little, northwest logging town where I live. The protests seem to be made up of mostly young people with signs standing on street corners, and most of them have been wearing masks, so that's good!

I appreciate what the protesters are doing, even if I'm too old and damaged to be out there with them. (I have medical issues AND psychological issues that keep me away from crowds... I social distanced WAAAAY before it was cool.)

As I nentioned above, today was a work day, but before I had to wage-slave-away in the salt mines, I worked on a bunch of MAIL ART! I think, at the end of my creative rush, I'd gotten one postcard and three little envelopes ready to drop in the mailbox. (Of course I have severe SEPARATION-FROM-REALITY-DISORDER, which causes me to forget that the "real world" exists as I drift in and out of my various mental dimensions, causing terrible memory loss---but a great imagination!!! In other words, after spending all morning making my art parcels and getting them ready to mail, I forgot all about them when I left for work, walked right out the door with the stack of envelopes sitting on the microwave in the kitchen, and subsequently DIDN'T drop them in a postal box on my way to wage-slavery... Silly. Have to remember to get them in the post esrly in the A.M. tomorrow. (I already wrote myself a note in my day book...)

Aside: HERE is how I remember to get ANYTHING done: 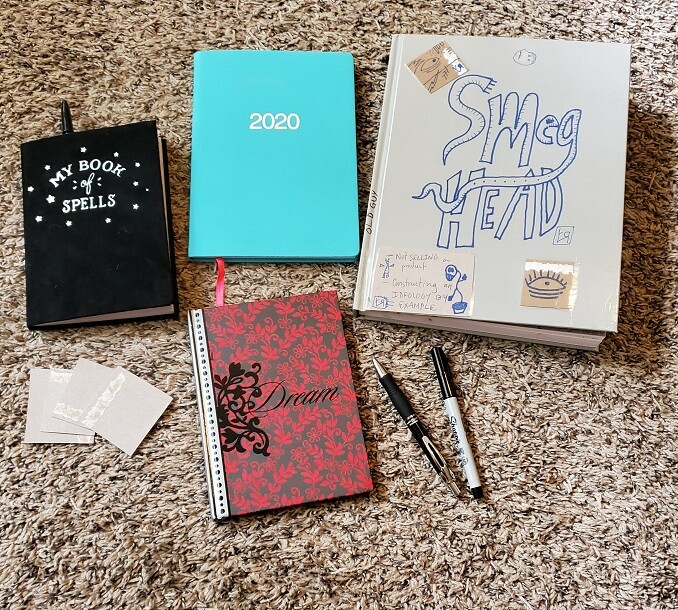 The black book in the upper left is my current "at work" notebook for notes while driving and during lunch break. The blue one is my day planner where I remind myself to do stuff, like shower and take pills and take out the garbage and eat. (Very useful!) The grey book in the upper right is my main journal where I draw and write poems and keep track of my weight and tape in notes and receipts and other things that I don't want to forget. The red book is for addresses. (Not pictured, I also have a book where I write down account passwords and that sort of stuff.) The cardboard chunks, I have hundreds of them stashed around the house, are for drawing or writing myself short notes, like grocery lists, songs for playlists, or short story or poem fragments. You never know when an idea will emerge, but I can be CERTAIN that an idea that isn't written down will FADE AWAY in a matter of minutes. (If I come across a word or phrase that I want to keep while driving or in the shower, I will chant/slash/sing it to myself, over and over, until I can write it down. If I don't, POOF!!! Gone...)

Back to the art... Here are some of the pieces I assembled today... 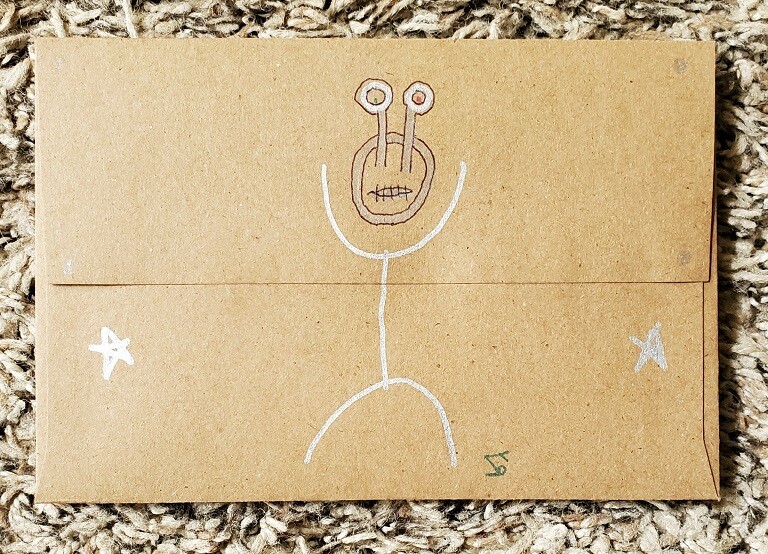 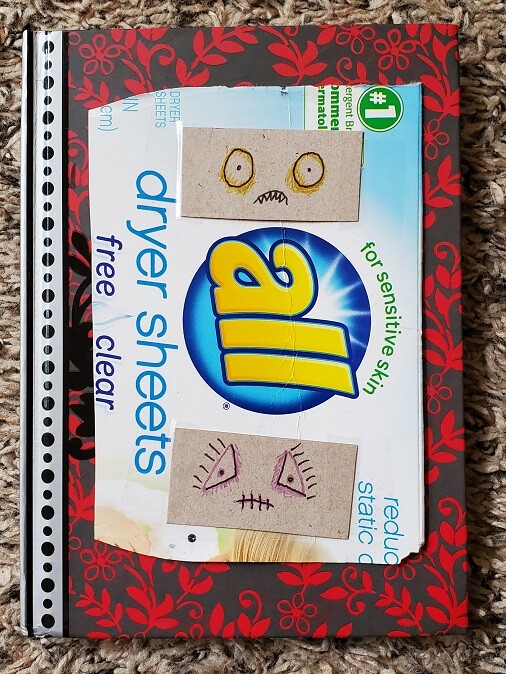 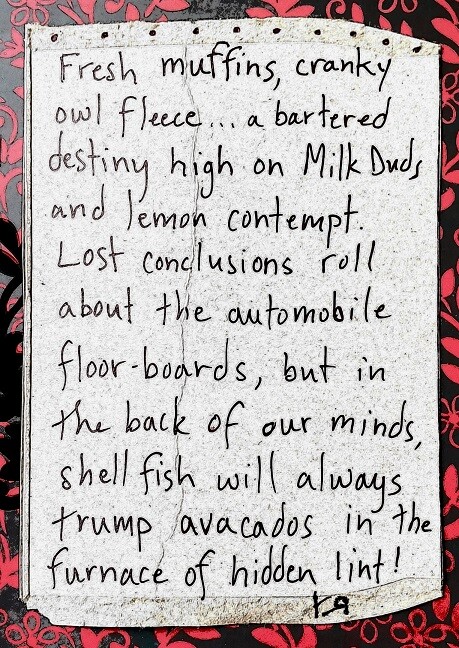 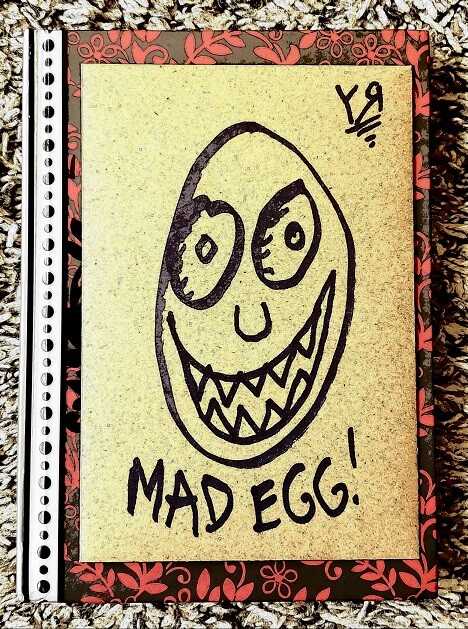 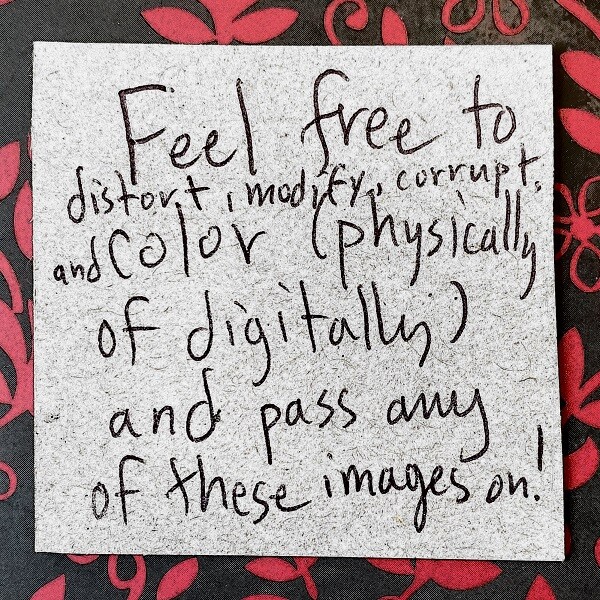 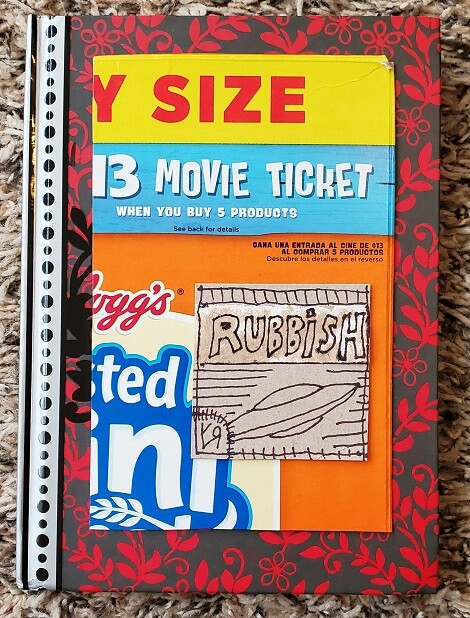 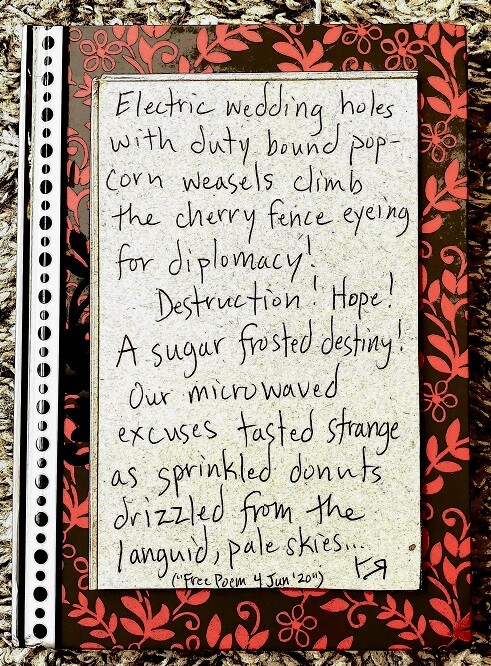 For the Dispersal Collective: 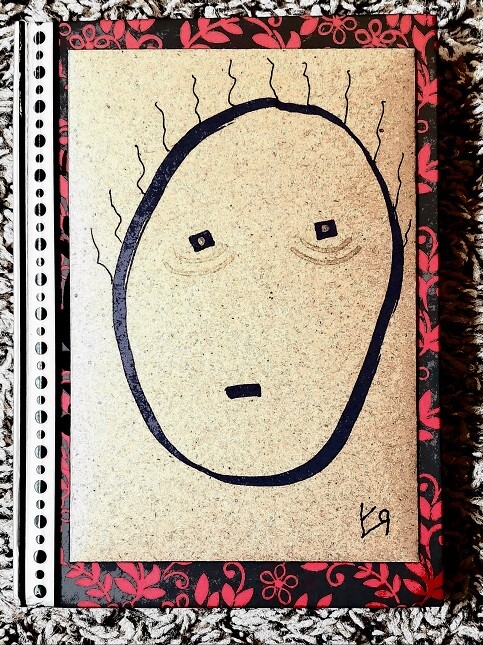 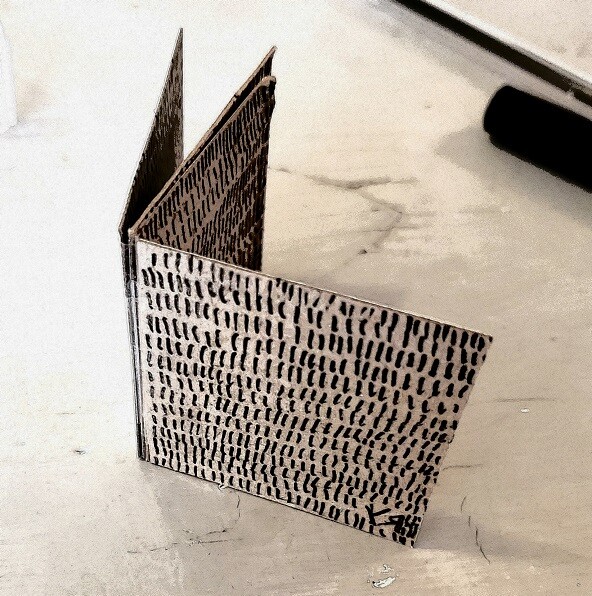 Another fun thing that happened today was an impromptu lunch get-together in which both of our daughters and the grandkid stopped by for homemade quesadillas! 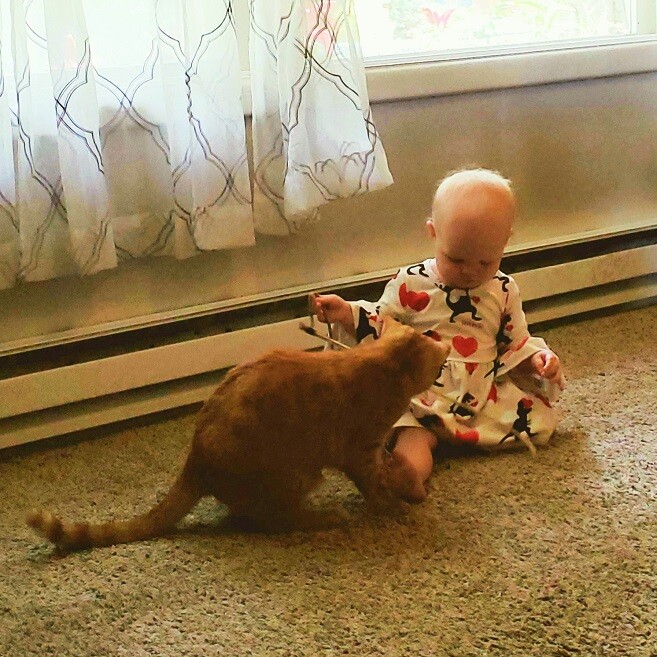 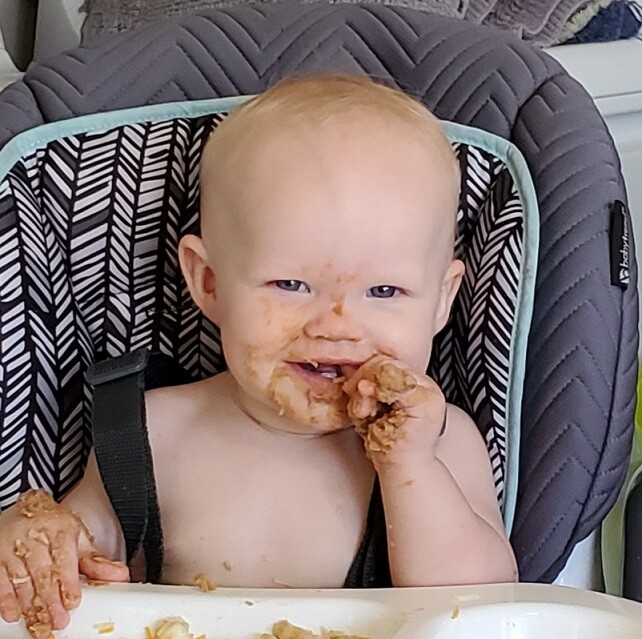 Baby vs refried beans... There were NO winners... (She got it in her EAR somehow!!!)

After lunch, I went to work. (Stupid.) However, I'm home now, and ready for some sleep! Thanks for stopping by!!! More exciting words and images tomorrow!

[This post was originally published on my HIVE blog, a couple of hours ago. I gave myself permission to republish it here... ---RFY]

SUPPORT INDEPENDENT FOLKS WHO ARE JUST MAKING STUFF BECAUSE THEY LOVE IT!!! 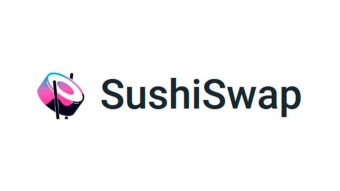 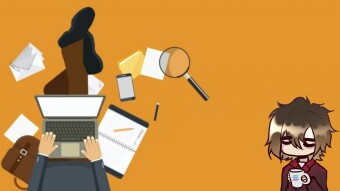