That's right, the "Dougs" may not like it (Dumb Old Utility Guy "Doug" as penned by their own industry experts), however it's true Zinc offers an excellent way out of the mess we are in (Generation not matching demand peaks when it comes to renewables Wind and Solar) and Zinc is being deployed today "at scale" to make both "dspatchable, in real time.

In China, VIZN has signed a deal to supply ZINCIron Flow Batteries, versus what California has done with AES/Siemens and their Fluence joint venture is doing  using Lithium. Rather Ironic the USA and China are on the opposite sides of the Lithium vs ZINC debate for batteries, since China has all the Lithium and North America has lots of cheap Zinc. A case of outsourcing our leading edge tech again? I hope not.

Have a look at this Webcast from VIZN to better understand how this is happning (and read their recent press release about their deal with China), VIZN is essentially enabling Wind power and Solar power farm developers to offer a "Firmed" product to the Independent Service Operators, as the ZINC BIG batteries from VIZN make their energy stored in their ZINCIron Batteries fully dispatchable in real time to serbvice peak electricity demands easily.  NICE!

So ZINC is emerging as the long term safe investment for large format battery deployments to "firm up" wind power and solar power generation delivery to the grid, in effect making such power completely dispatchable in real time. directly from the batteries configured as the "prime mover". (Some Doug talk ;) )

Even incumbent Panasonic who supplies Tesla, and old time battery maker Exide are entering into the Zinc Air market fray... which is growing rapidly (ie some Lithium battery salesperson at Exide and/or Panasonic just lost a big deal to a Zinc Air vendor, and they quickly counter with a press release to stall the market... via MarketWatch their "pay for propaganda" be-otch)

The Zinc Air vendor systems emerging quickly, are made of rechargable/re-useable large format container batteries based on different Zinc Air chemistries and flow handling and generation technologies. Each of Nant, VIZN and MGX for example, have a different way to deliver their low cost Zinc Air Energy Storage systems, so its not a straight apples vs. oranges comparison. 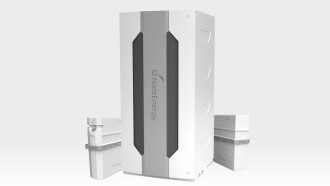 Nant Energy has made big splashes lately having obver 1000 remote sites installed with various sizes of their ZincAir rechargeable battery technology. They have "Silicon Valley Spin" working for them not to mention the VC money behind that spin, which will likely propell them for a while and keep their billionaire owner of the L.A. Times happy and flush with cash to  service their burn rate. (At least until they get to Cash Flow positive when lease revenue  pushes their heads above water). Nanat is hedging a bit by offering a hybrid ZincAir+Lthium  solution, likely because the energy density of their Zinc solution is a bit less than their competitors, so  some might see this as a bit of compromise, to me its a pragmatic move to buy them time to improvee their Zinc chemistry and cost per unit value prop.  ;) \ 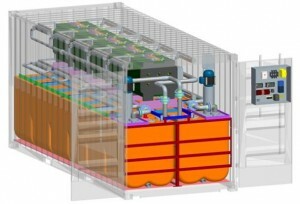 A relatively new player in the field of large scale batteries, with big moves in China earlier this year to license their ZincIRON battery design to a consortium of Chinese companies. Offshoring of tech again? Interesting given AES/Siemens joint venture Fluences has recently won a 450MWhr project to supply So. cal. Edison, using ehri Advancion Batteries designed exclusively with Lithium ( see https://www.energy-storage.news/news/fluence-sets-sights-on-displacing-gas-as-400mwh-storage-plant-nears-complet 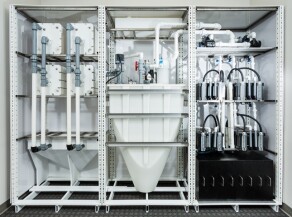 Also a new player in the large format space, MGX brings a scaleable modular design to the market running on Zinc Oxide like early market leader Nanat Energy of California. Based in Vancouver, MGX , formerly ZincNyx until the recent acquisition is currently testing field prototypes and promises to ship in 2019 their first commercially supported products and systems into grid attached projects. Similar to VIZN,  the MGX business model centers around licensing and supporting their technology to OEM partners. Spun out of MGX Minerals for public market listing purposes just a few days ago, it will be interesting to see MGX go forward into the market with newly 3rd party validated claims from the CSA, anada's standards organization.

For those wondering about to integrate ZINC BIG Battery Arrays into your community microgrids, long no further than the battery agnostic company of S&C. They have invented parts of the grid as early as the late 1920s, know their stuff, and are considered world leaders in attaching power to the grid, especially renewables these days.

ZINC is an essential part of life in our own bodies keeping us healthy, interesting isn't it ZINC will also return the public grid to helath in the form of large format batteries, which in turn will improve the health of the planet by one day, sooner than we think, replacing non-renewable combustion using coal, nuclear and even natural gas, with intelligence design and planning.

That said, the base materials in use are Zinc Oxide and Oxygen (Normal Air intake and exhaust),  the former being a cheap an abundant material found in virtually every corner of the Earth, and often a by-product of other mining efforts extracting and refining gold, silver and chromium from their minig sites. The latter, good ole air is filtered in bound into the Zinc Air battery, and exhausted when used in the flow battery process of Zinc Air. Zinc Air  energy storage tech has No fire issues and definitely cleaner, and easier to recycle. (After all Zinc Air batteries are what power hearing aids..)

Zinc Oxide is generally easier to extract because it exists in native useable states located in stratifications quite close and even on top of the earht's surface (Peru for instance).   Where as Lithium hard rock mining methods used to remove Lithium from the Earth at various depths are more complex and require more equipment and Cash. China has a distinct advantage recovering Lithium from the earth, using "near slave" low cost manual labor to extract most of its Lithium from clay stratifications, literally having workers stand in the mud,  packing backs with clay to remove the base clay material before processing takes place to refine the clay or mud into Lithium in a useable form.

Hard rock miners of Lithium must crush and crush and crush again Lithium laden hard rock into progressively smaller pieces until the final pellet size used emerges prior to smelting and separating the Lithium metal from molten ore,  this crushing reduction process into pellets raises the cost of Lithium pulled from mining sites other than China. (Canada, America, Europe,Suoth America, etc..)

So Lithium "reigns the roost" (Specifically Chinese Lithium), so to speak crowing about it's advantages over other energy storage chemistries for the last 20 years,  until now.

As an aside, trying to get new Lithium Mines opened in the USA is another story., the Environmental watch dogs are not budging...nor should they..

Then there is the Lithium FIRE problem 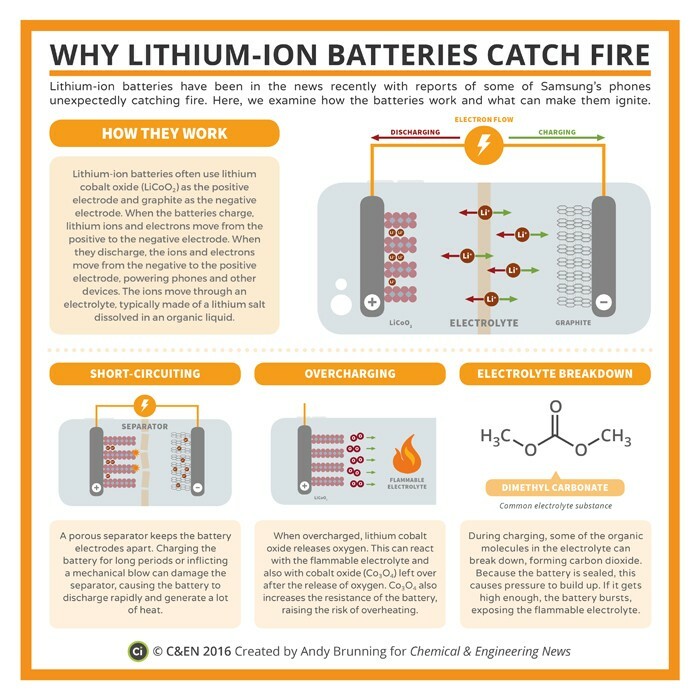 Zinc Air will dominate large formwat battery storage, for a long, long time... Much to the dismay of Lithium Battery Fans..

The reality is everything is changing quite rapidly right underneath the Lithium proponents noses of Tesla and others, in the alternate energy storage universe called ZINC.

For more info in the problems keeping Lithium energy storage from catching on fire... watch this..

And the fact that Tesla is sort of close to $200/kWhr (no thanks to the 10 year tax free subsidy he receives from the tax payer of Nevada?) while other Lithium manufacturers in the same US markets have no chance to hit such a number without the same rate payer subsidy so they source from Japan, China and South Korea companies largely sourcing their lithium battery production on low cost labor spots of China and South Korea.

So the game is changing in large format energy storage, which will certainly be a boon to DER Distributed Energy Resource deployments generating, storing and delivering power at the edge of the grid and off grid. (like us @ TWIND Power)

ZINC THE FINAL FRONTIER? In search of planetary health? look no further than ZINC.

Frankly our efforts to bring low cost offgrid energy stations powered by smaller wind powered battery charging sub systems @ TWIND Power for off grid energy stations will benefit from the emergence of Zinc Air as will Big Wind, which can, if properly engineered, to include on site Zinc Air Storage, will reduce the deployment size and cost of  Big Wind turbines to better match local charging requirements of of Energy Storage. Such a change in energy generation design approach moves Energy Storage into the role of "First Prime Mover" for energy delivery into the distribution system of the power grid or localized microgrid, where Big Wind is simply deployed together with Big Solar to become co-supplying sources of intermittent electricity charging, together with the public grid, where the latter is used by the Energy Storage centric DER "Distributed Energy Resource" as a charging source of last resort, for grid edge or microgrid delivery of power.

All of the moves in the ZINC market for large format batteries above means No  tax payer subsidy required and lower if not just stable rates charged for power generation, storage and delivery, to the rate payer,  where Energy Storage Depth (masured in KWhrs) becomes the replacement line item on your bill for Tranmission (this line item gets owned by the operator of the DER). It will be a great day when DERS become the prime mover for energy generation, storage and delivery and the grid is largely demoted to backup charging sources of last resort in most cases AND,  you can choose how much KWhr Energy storage you want as  "days of backup" guaranteed deliverd by your local DER.(running Zinc Air Batteries) :)

Need the bigger picture? (as the deep state sees it in the USA?)

For those looking at the broad spectrum Energy Mix,  check out this fairly recent VOX aritcle whining about lack of government (rate payer)  funding of the ARPA-e,  the Trump bashing and Obama hero worship aside, there are a few relavant facts and links here, as long as you wear a clothespin  on your nose to keep the stink of political bullshit from putting you off. Most of us can see through this BS to get at the real facts, sometimes written between the lines... ;)

Yes it's happening, and IOTA has a nice blueprint for peer to peer energy trading anyone can use to create their own energy trading market on IOTA's scalable distributed public ledger (blockchain) called the Tangle.. have a look if you are a crypto type,  https://docs.iota.org/docs/blueprints/0.1/p2p-energy/overview

The Future certainly looks alot healthier wor more ZINC entering the battery market. You can all help by liking and sharing this article as you see fit, and if you really got somthing out of it please  sign up to Publishox and earn a tip for reading it, and tip me a bit for producing the content. :)

Thanks for stopping by,