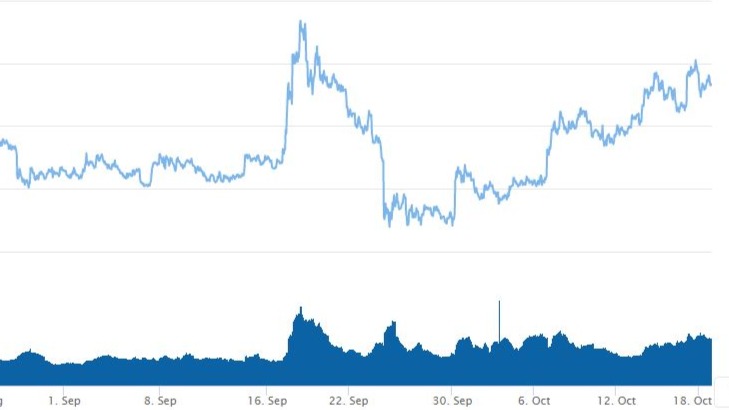 In the last weeks, most of us have been truly obsessed what Bitcoin has been doing. Now Bitcoin plays around 8,000 USD levels, and most of us really don’t know where it goes for sure in the next week, although most of us are 100% sure that there will be a bull run very soon.

All the major cryptos have dropped or have been getting maintained in a boring sideways market during some days.

But there will be always one exception, and this exception is called XRP being issued by Ripple Company.

XRP is the top 3 crypto, it is focused on finance sector. It’s market dominance started to increase in the recent days, ATM to 5.82%.

XRP disappointed a lot of traders this year, for many months of the first part of the year, it’s been traded in the sideway market. For the first 4 months, XRP/USD had a very boring trend being stuck somewhere between 0.30 – 0.36 USD, on June 23rd it hit its max level of 0.47 USD. After Bitcoin drop from 13,900 USD to 8 K levels today, XRP decreased by 50%, breaking a strong support of 0.28 USD in the fourth week of September. (one of the lowest levels of this crypto in 1 year period).

XRP reached 0.23 USD. A lot of people were saying really nasty things about this top 3 player which has been hugely underestimated in the last months. Ripple Corporation has done a lot of good alliances in the banking sector and other financial companies, recently it has done also a strong alliance with leading crypto exchange Bitso in Mexican market.

While other cryptos have had very weak performance in this first part of October, XRP steadily and surely started to climb up.   After hitting the bottom several times during the last part of September, the support line has been market around 0.23 USD barrier.

Guess what? Despite all the forecasts, gloom, XRP has increased in the last 2 weeks almost by 16%. XRP has increased by 8% in 7 days, and comparing to its lows it went up by 25 percentual points. Now XRP = 0.29 USD.

When you check XRP/USD chart you can observe a very nicely formed Uptrend pattern.

This currency has shown much better performance than other key players. So XRP what is your final destiny?

So XRP has taught me a lesson: Don’t ever underestimate any crypto because you may come across with pretty cool surprises!