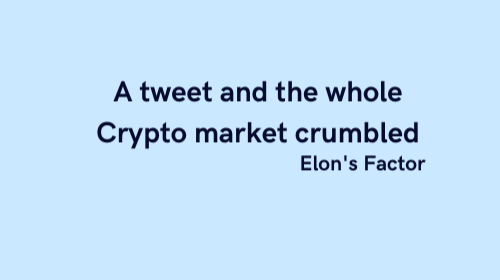 Elon will invest in Crypto but Tesla won't accept crypto

Isn't it ironic that Mr. Elon Musk was advising people to invest in cryptocurrency but suddenly he posted that Tesla won't accept the cryptocurrency? 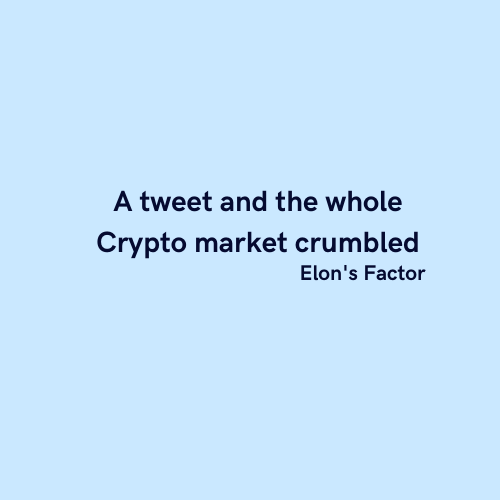 Yesterday, after Elon's tweet, saying that Tesla won't accept the cryptocurrency, the whole crypto market fell. The cryptocurrencies which were doing great in recent days now having a massive decline in their value. He is the same person who was promoting the use of cryptocurrency last week and not through his official account, he is disowning them. Elon also called the father of the Dogecoin was promoting dogecoin on tweeter in April month. he said that "People should be investing in the cryptocurrency as they are the future." But what had happened now? Why suddenly he flipped? Well, let us hear what he said and how his tweet impacted the crypto world?

Elon said, " Bitcoin. We are concerned about the rapidly increasing use of fossil fuels for Bitcoin mining and transactions, especially coal, which has the worst emissions of any fuel.

Cryptocurrency is a good idea on many levels and we believe it has a promising future, but this cannot come at a great cost to the environment.

Tesla will not be selling any Bitcoin and we intend to use it for transactions as soon as mining transitions to more sustainable energy. We are also looking at other cryptocurrencies that use <1% of Bitcoin's energy/transaction."

Well, he started his Tesla plant in China and India which depend More than 50% on fossil fuels for their electricity need. Where were his concerns then? He promoted cryptocurrency openly that we all know, where were his concerns then? I too believe that people should reduce the carbon footprint. Government should switch to clean energy. But it won't happen overnight. Even his tesla cars running in streets of many nations which totally depend on fossil fuel are hypocrisy. Does he think that the electricity generated is clean? Let's take Arab Countries whose electricity demand is fulfilled by ~99% fossil fuel, Will Elon won't sell his Tesla Cars there?

His message to promote environment conservation is good but it became hypocrisy When the same person before 1 week was promoting the cryptos. It is similar to various Nature activist that flew on a charter plane to give lectures on the environment conservation saying people should stop traveling in planes or use their own private vehicles. A person who himself harming nature and then advises you not to harm nature is a big HYPOCRITE

The environment must be conserved but not by taking our society backward but by new innovations like thorium reactors, solar energy more efficient batteries, etc. People will bash me on my post but yes you all are open to your opinions we live in a free world.

How it affected the crypto market?

All the cryptocurrencies have hit bottom this time except for a few. The crypto market is down by 8-10% since yesterday. Bitcoin has faced the biggest loss. The price of the world's largest cryptocurrency dropped from around $54,819 to $45,700, its lowest since March 1, in just under two hours following the tweet. Similar happened with the ethereum. Its price dropped by to $3700 from the $4300.  The Platform currencies like HIVE, HBD, LEO, AMPL all have hit a big blow. The crypto investors are very furious about this. Many new investors have gone in big loss after Elon's tweet. If a single tweet could affect the value of coins this drastically, then I think we are not ready for the cryptocurrency.

Please do tell your opinion on this incident. You are open to support my point as well as open to criticize it. Would love to know your opinions.