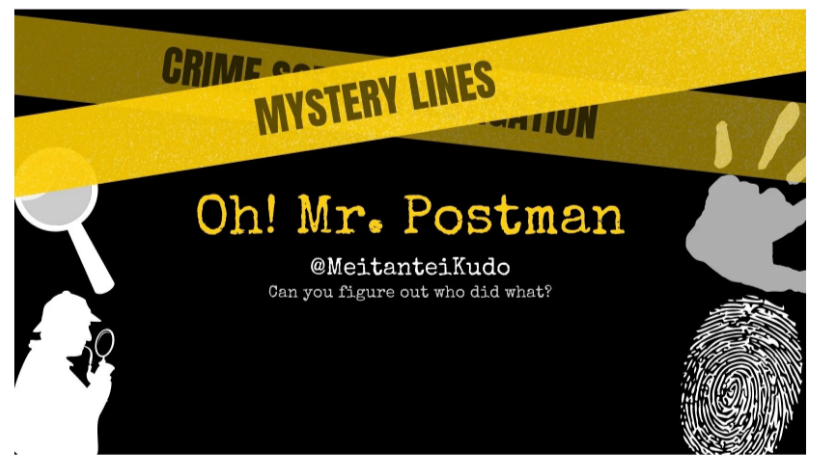 Gone are the days of door-to-door newspaper delivery and the door-to-door mail service. But for Henry, a former mailman, he would forever hold in his heart and memory that fateful encounter he had with a young Sherlock Obvious back when he was delivering the mail.

It was a Friday and as for Henry Post, it started like any other. He had the same breakfast of coffee and some toast. He wore the same uniform that he wore for years. And just like usual, he arrived at the post office 3o minutes before his supposed time-in.

He greeted everybody as he went over and loaded his baggage with letters and parcels for delivery. After a few minutes of chit-chat and idle time smoking cigarettes in the back of their office, he went on his way at the beginning of his route.

Mail after the parcel has been delivered in order of their addresses. It was right after 10 when Henry reached the latter part of his route. It was a lone house at the end of a trail where Mr. Wimble lived alone.

He walked up a set of stone stairs and he was surprised and a bit suspicious in what he saw. He frantically knocked on the door and banged on the window but the old man didn't answer.

Worried that something bad happened to the poor man he rushed towards the main road and phoned for the police.

He waited for the police and he guided them towards the old man's house. As the police arrived they observed the things on the footstep of the door. They found some flyers, unopened mail, Monday's newspaper, some bottles of milk, a catalog, and a TV guide for the month.

The police forced the door opened and saw that the man was dead and there were some abrasions around the neck. They suspected that the cause of death might be strangulation and they are working with the angle that the man has been murdered.

They immediately cordoned off the place and a group of joggers and people that are walking the trails were already gathered around the area.

Young Sherlock was mixed in the ground keenly observing the scene. He was playing around with his friends and he snuck into the crowd and somehow got closed to where Henry and an investigator were talking. He was intently listening to the adult's conversation and he remarked after hearing just about the entirety of facts, "Hmmm. Interesting. I know who killed him."

The boy explained to the investigator his silly theory and he ushered Sherlock back to the crowds and out of the crime scene.

The next day, Henry woke up a bit tired and still shaken up from the incident he had witnessed. He went down to fix himself a small breakfast. He turned the TV on and he sat leisurely in front of his dining table. He sipped a bit of coffee from the cup and the NEWS came on.

It was about Mr. Wimble. There was the interview given by the investigator and the chief of police came on to the scene to brief the public about what happened. As he relayed that they have arrested the suspect, Henry was just surprised and the cup fell from his grip. The facts that the chief of police delivered were verbatim of the young boy's silly remark. It was as if that Sherlock knew exactly what happened.

"What an intelligent boy that was," Henry said to himself in sheer awe of the boy's deductive prowess.