Finding a good project with great fundamentals can be very rewarding in the crypto space. When I began using Presearch, I had not expected to become so vested in it. Initially, I had registered, intending to use it for searches only. However, I ended up running nodes, as well as staking keywords. As I approach the first anniversary since I signed up, here is a look back at how it has fared for me, examining its performance as a search engine, search reward effectiveness, running nodes as a service (NaaS), and the keyword staking mechanism.

Before we move into all that, for any of you who are new or might have skipped looking into the project, here's a little about them. Presearch rewards users for searches with its native PRE token with the premise of better search and privacy. A network of community-run nodes works behind the scenes to anonymize these searches to prevent tracking and storing user information. The genesis of this project was when Google pushed the founder and small business owner Colin Pape's website, shopcity.com, to the far reaches of the internet. Affected by the capacity of search providers to control and influence information, the concept of a decentralized search engine started to take form, and Presearch launched in 2017.

The home page gives you the choice to search with any provider so you can add or remove the ones that you use frequently. For NFT fans, the latest partnership with OpenSea permits it to add to the home page for fast search. Rewards are dynamic and inversely associated with the price of PRE. Using it gets you 30 paid searches, eligible to be withdrawn at 1000 PRE tokens. So how does it perform on some key parameters as a decentralized search engine?

Presearch utilizes several search indexes to provide the best results. There is no censoring, active tracking, or storing of personal data, so results tend to be neutral. If you like personalized searches and don't mind being tracked all over the internet, that can be a bummer. I have been rather pleased with the output quality so far and haven't had to revert to Google or other providers.

My usage varies and is moderate on average. I have never crossed 30 searches a day and find it an appropriate threshold for everyday users. I am a regular user, and despite my moderate usage, I have accumulated a decent 280 PRE tokens in the rewards account, including three referral payments. At the time of writing, PRE tokens were trading at $0.26, which makes it about $75. Considering no other provider is paying for searches, I would say that's pretty decent gains for an everyday task. The catch, however, is with withdrawals, as it's locked until you reach 1000 PRE tokens. This sets a lengthy timeline for anyone wanting to cash out. The silver lining is that web3 withdrawals are in the works, and withdrawal limits will be revised soon after that.

Results can sometimes take a few seconds extra time to display. It isn't as fast as Google or Brave, but it isn't slow enough to impact user experience. That's barring the few times when the service tends to break down while upgrades and fixes are running in the background. That isn't something that happens with any other service, so that's a problem that needs to be fixed. Having said that, this project is still in the test net, and they already have a remarkably stable and usable platform with millions of queries processed regularly.

Presearch is an infant when you look at the biggies that have built an ecosystem that keeps users on their platform. That takes time, effort, and resources to develop. This means that there are a few things that are missing, like maps, snippets, auto-suggest, and image search. These were the few occasions when I did use Google.

It does what it sets out to do, fulfilling its primary job as a privacy focused search engine. After a while, you no longer notice any difference. Even when you need to use the map and other features, you don't have to leave the platform as they are easily accessible on the home page.

Presearch's vision is made possible with community-run nodes that power the search engine. As of the last official update, there were 55,300 nodes in the test net. My natural curiosity and the desire to assist the project actively made me consider running nodes. In hindsight, my timing could not have been better. The crypto crash last July meant a massive pullback in prices, and I was able to get in at under $0.03. Let's see how that worked out.

Spinning up nodes was the hardest bit for me due to my limited technical knowledge. But perseverance and community support made it possible. It requires some amount of technical skills to know what you are doing. Being a novice should not deter you as there are several walk-throughs available, and you can always join the Telegram or Discord channel if you get stuck. If you are playing the long game, I would recommend upskilling, as with the mainnet launch, running nodes can get more technical. Different roles will be required to be performed by node operators, detailed in their road map and vision paper here: Vision Document.

Node returns are dynamic and tied to the price of PRE, similar to search returns. Despite the consistent gains in dollar value, the token rewards have decreased over time. On the other hand, as the token value has increased over 10x, the node value has multiplied. The initial token accumulation and the subsequent price increase have meant that my node returns alone have covered my initial investment in terms of dollar value in a year of setting and running them.

As a test net participant, in Presearch, as in any other project, the risks are as high as the rewards. The early node runners that set up the network did it using their resources without receiving compensation. Post the test net launch, however, they were generously repaid for their support. This generosity was repeated this year by giving longtime supporters commemorative NFTs as the project heads towards the mainnet. These vary depending on the role within the ecosystem. I was super blown away by this surprise gift, and it felt pretty amazing to be a part of this journey! These NFTs can be traded on OpenSea for a profit or held for future perks. 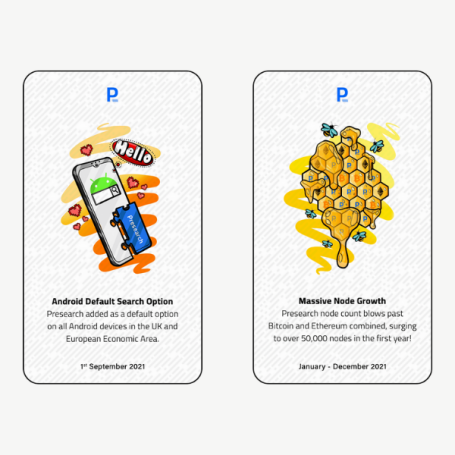 Source: 'The Road to Mainnet' collection on OpenSea

The system requirements are not very massive at the moment, so it's best to use a low-cost or free VPS service, a raspberry pi, or even your computer to be able to meet the operating cost. It isn't going to make you rich overnight, but if you are keen to dip your toes into something new, it is a low-risk investment to run on the side. You can even spin up a node without staking, though it won't give any returns.

The keyword staking program is the advertisement model that allows advertisers to stake PRE tokens for keywords. The highest bid wins the top spot. So far, 7,200 unique keywords have been staked on the test net. There is no PRE to be earned, but so long as you hold the top position, you get free advertising for your business as there is no click per cost. It was a great reason to jump into keyword staking and divert some traffic to my online storefront. Coupled with the slash in keyword stake from 1000 PRE to 100 PRE, I decided to move the node rewards to keyword stake.

It has only been a couple of months since I started my stake, so it's a little early to evaluate it. Nonetheless, this has been the most underwhelming of the lot. Despite the response, I will stick this one out for the time. Besides, this is free until July, after which there are changes in the pipeline. I can see that a couple of my keywords that weren't getting any hits have started to get some exposure as the traffic increases. I will do a detailed review of keywords once some time has passed or some changes introduced. 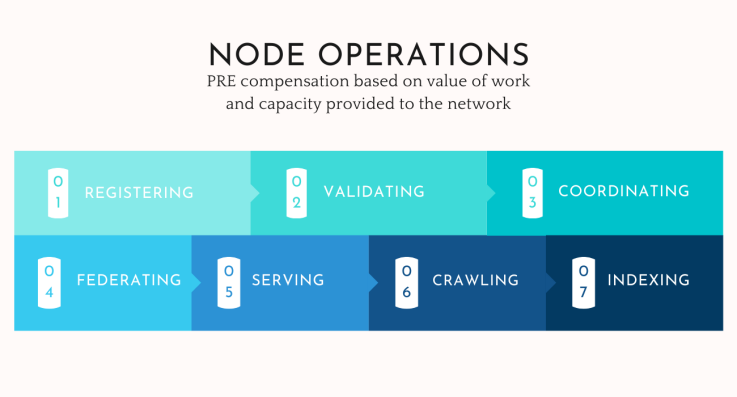 If you have some PRE on the side, you can set up a stake to divert some traffic without any additional cost. You can remove the stake at any time if you want to withdraw. Crypto-focused ads get more hits. I've recently seen an uptick in my non-crypto storefront with increasing users.

Anyone who uses Presearch as a token farm will be disappointed as they have an anti-abuse system to avoid misuse and weed out short-term profit makers. Using it as any regular search engine is more satisfying. Value is gained not just with tokens but also by getting back control and choice. The drop in reward tokens for search and nodes, though disappointing, is reasonable to sustain the project. There is still plenty of opportunities to earn as it is still running on the test net. Mainnet will bring in more users, more traffic, and better yields. Nodes will have other jobs, thus changing the compensation scheme. Before all of this happens, the withdrawal system needs to be improved. The current system is not ideal, to say the least. Bridging over to Polygon or another chain is also necessary to make it economical. It is, however, reassuring the way the team listens and communicates with the community, which makes me pretty optimistic about Presearch. There are lots to look forward to and gear up for this year.

To sum up, my journey has been very fruitful. It is a gift that keeps giving. The financial results may not be typical, and recovering investments might take longer. There are many reasons to use Presearch. Whether as an alternative to the big players, participating in the community, or for economic reasons. Besides, if you are trying to explain the benefits of crypto to someone you know, this project does all the work for you!

If you do not use Presearch yet, consider using use my referral link below to register and earn 25PRE tokens and give it a spin. If you are a user, I would love to hear your experience. How long have you been using Presearch? Do you run nodes or stake keywords? Go ahead and let me know in the comments. Show your love by adding a tip or a like! Your support encourages me to keep writing.