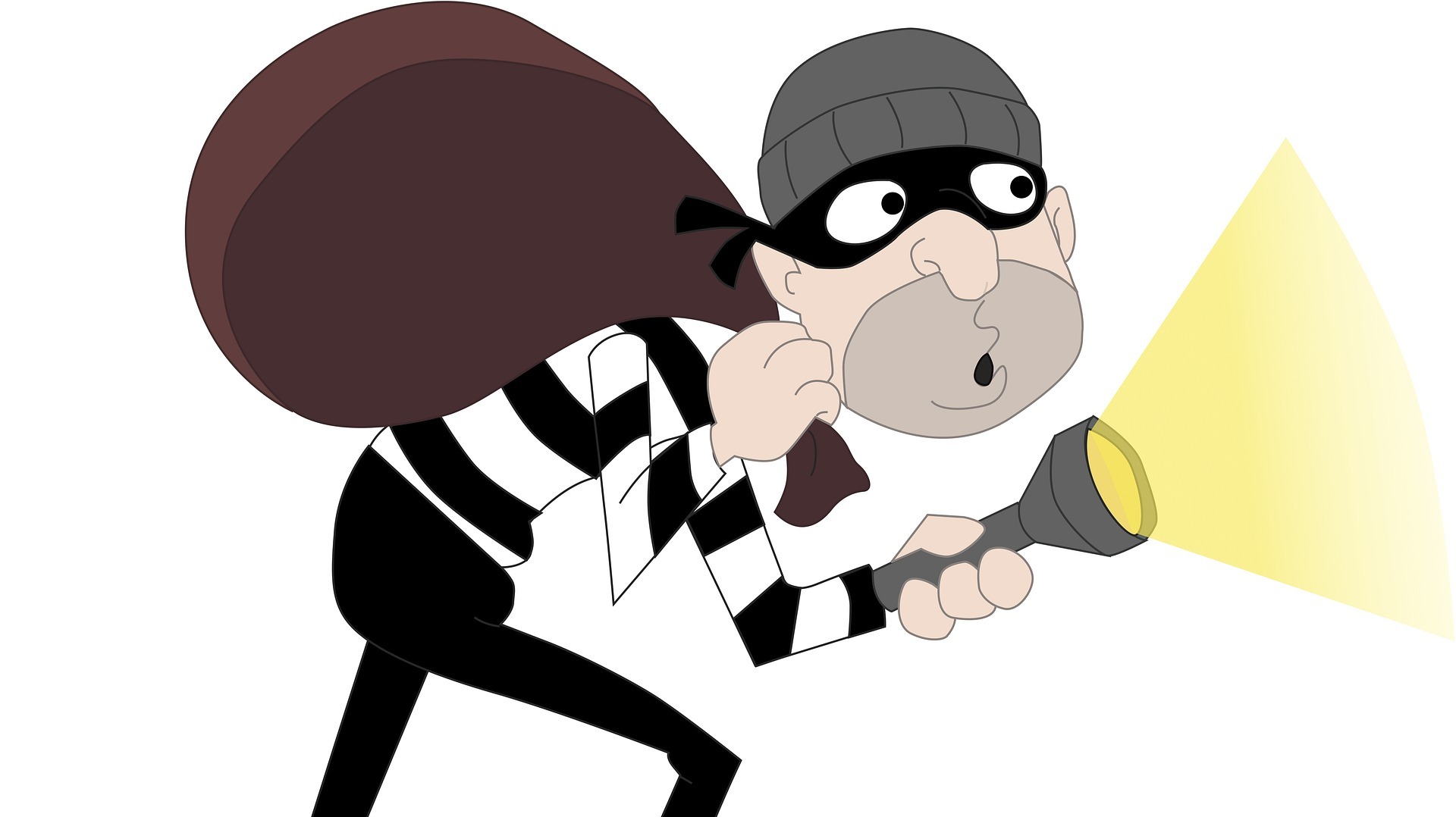 Guys, imagine casing a joint, planning to steal its jewels, breaking into the spot and then barely escaping with your shirt on your back and leaving your own jewelry behind in the process. You've got to a pretty dumb thief, right? Like the hacker who lost 2.5 ETH trying to break into the NEAR protocol. I mean, in the world of thieves, this dude can't leave his calling card anywhere.

Meanwhile it appears as though celebrations in the Yugo Labs camp has soured a bit following complaints of manipulation and ill treatment when users discovered that they had to pay more gas fees than they had bargained for to acquire Otherside NFTs, the sale of which broke all records in the metaverse over the weekend.

And have you heard about the Twitter user who sold his web domain to a crypto company for $500,000 after purchasing it for just $16 himself? Man, some folk have all the luck!

So listen, I couldn't make this one up if I tried. Over the weekend, there was a hacker who attempted to break into the Near protocol's ETH Rainbow Bridge, and if you were on Twitter, you might have had a ringside seat because Aurora Labs CEO, Alex Shevchenko, kept us up to speed on all the details.

Shevchenko noted that the attacker, using ETH from Tornado Cash, deployed a contract to become a Rainbow Bridge relayer and send fabricated light client blocks. His attempts failed, however, because one of the bridge's watchdogs detected the activity and created a challenge transaction, sending it to Ethereum. MEV bots figured out that front-running the transaction would result in a 2.5 ETH gain, and guess what happened guys? The hacker's folly became the protocol's gain.

I mean, listen, this level of genius reminds me of that guy some years ago who either attempted to  vandalize or break into Kent's Meats and Groceries in California, USA, made a complete bumble of it, was caught on camera, and the company later capitalized on his stupidity and made an ad out of it for its award winning pastrami. Remember that story, guys?

In his tweets about the incident, Shevchenko urged fellow firms innovating in the crypto sector to pay adequate attention to security measures on their platforms.

I wish everyone who is innovating in the blockchain to pay enough attention to security and robustness of their products through all the available means: automatic systems, notifications, bug bounties, internal and external audits.

I mean, you can hardly disagree with that, right?

The party's over at Yugo Labs, guys. Following the record breaking Otherside NFT drop over the weekend, it appears as though the hangover's kicking in for some revellers.

So we discussed this yesterday, right? Yugo Labs minted Otherdeeds, title deeds for land in its Otherside metaverse, and according to reports, it was the largest NFT mint in history. So it was deemed to be a huge success and there were champagne bottles popping everywhere. And then someone soured the punch.

And so, today we are hearing that some users paid between 2.6 and 5 ETH to complete their transactions. And you know what I thought? I was like, maybe the NEAR hacker might have been better served with an NFT investment, wouldn't you say? At least he could have tried to flip it for a profit. But then again, there were also users who failed to complete their transaction and lost gas fees, right? So I guess our  friendly neighborhood hacker preferred to roll the dice for a bigger payout the nefarious way. Who knows?

Anyways, disgruntled users are alleging that the mint was planned to fail so that the group could launch their own chain migration. 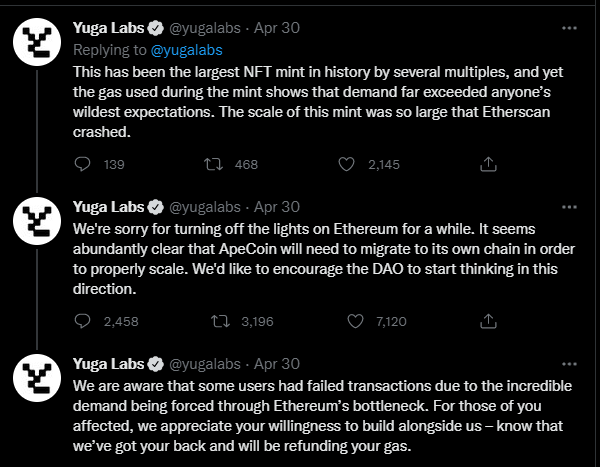 And I mean, I can't say that the allegations are true, but it is kinda clever marketing in a creepy sorta way, isn't it?

But guys, listen, all fun and jokes aside, I'd like to be clear that these are just allegations. I mean, incidents do happen on projects and it should be noted that whenever  there's a business transaction and something goes awry, whatever the circumstances, if someone is disgruntled, one could reasonably expect allegations to fly, often without merit. And so, it should be noted that the Yugo Labs team has acknowledged the loss of gas fees by some users and has indicated that they will refund the lost coin.

Some folks were pretty pissed though. I mean this guy went on a rant.

Listen, this sounds like one of those TikTok content creators' stories, right? But if this story is true, I swear I'm in the wrong business. And personally, I can't help but wonder which multi-billion dollar CEX he was able to stare down.

EU Commissioner: We Need A Global Approach to Regulating Cryptocurrencies

Finally, did you get a chance to read today's opinion piece published in The Hill by the  EU Commissioner for Financial Services, Mairead McGuinness? For a synopsis, the commissioner acknowledges that cryptocurrency, as a global movement, is becoming mainstream and suggested that the response should be mainstream as well.

In his column, McGuinness notes that, "The crypto ecosystem and the technology that underpins it could bring great benefits to the world."

He noted that blockchain technology removed the need for centralized processes and intermediaries, making transactions more efficient and transparent by recording key information in an unchangeable format, and making it accessible to all market participants.

"This has the potential to make payments cheaper, faster and safer," he wrote. "It could also unlock the billions of euros and dollars currently used to cover credit or settlement risk in the financial system."

McGuiness also pointed to risks in the crypto ecosystem, however, referring to risks of fraud, market volatility, the potential to circumvent sanctions, allegations of money laundering and the environmental implications for high energy consumption among other factors.

He states, "I believe that the EU and the U.S. can together lead the way on a shared international approach to regulating crypto. Together, we can enable innovation in finance, while protecting consumers and maintaining financial stability."

Pointing out that to make rules on crypto fully effective, there is a need for global coordination and joint international principles, McGuiness put forward these suggestions:

And so, my friends, what are your thoughts about these developments? The NEAR hacker who fumbled his own bag, that story was hilarious, right? Reminds me of a time when I was a kid and this dude was trying to step on my laces to trip me up and ended up fumbling on his own laces and rolling past me. Talk about foiled.

And what are your thoughts about the Yugo Labs allegations? I don't know how to feel about this one. Part of me wants to think the users are just disgruntled because things didn't work out according to plan, but listen, I'm not gonna stick my neck out when I don't have all the facts. So we'll see how this unfolds.

Also, do you think the Twitter story is true and a guy really flipped his domain for an insane profit? That's some crazy luck if it is, right?

And finally, how do you feel about Commissioner Mairead McGuinness' opinion piece calling for a global approach to regulate cryptocurrencies? I'd love to hear your views.

Well, guys, I'm off again in search of another story. In terms of my personal journey as a trader, I haven't done much trading lately, I've just been sort of investing in my blogs more or less, but I've been introduced to a new exchange, ProBit Global recently and I'm not sure how I feel about it yet. At first glance, I'd say the interface is not as user friendly as Binance or Kucoin, but it's early days yet, I'm still stumbling around, so we'll see.

Until we meet again, please remember to be safe. Always research the projects you invest in carefully and only risk what you're prepared to lose. It's the best advice I can give. We'll chat again soon.