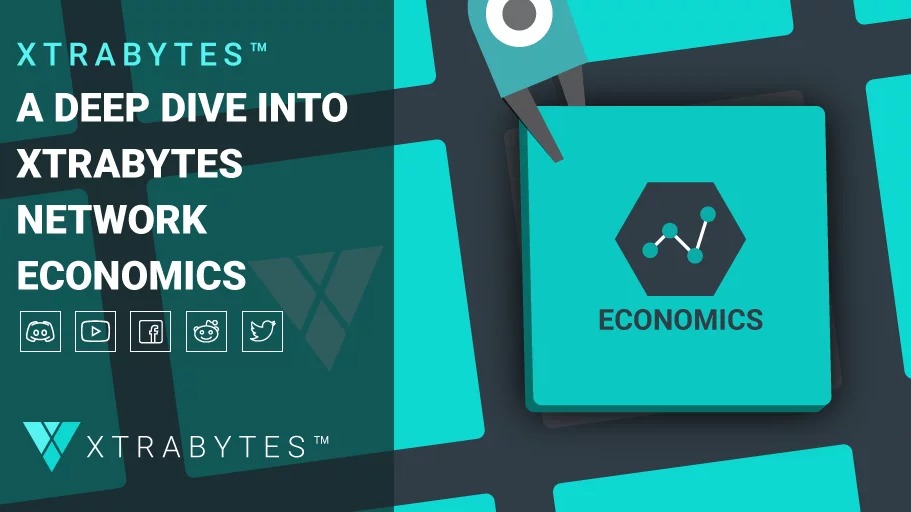 A Deep Dive Into XTRABYTES STATIC Node and Network Economics

As mentioned previously, the XTRABYTES ecosystem is more than merely a network designed to facilitate cryptocurrency payments. The latter excel at providing decentralized payment transactions, a function dependent upon transaction fees that are distributed to those that facilitate these transactions (such as miners).

In contrast, the XTRABYTES ecosystem achieves far more functionality as it provides an entire ecosystem dedicated to enabling a multitude of decentralized services (including payment transactions).

Unlike most traditional blockchain companies, the XTRABYTES ecosystem actively embraces a variety of entities. Among them are the XTRABYTES companies (XTRABYTES Ltd. & XTRABYTES Intellectual Properties Inc.), the STATIC nodes, developers, asset providers, and application users.

A Closer Look at the Ecosystem Entities

For instance, XTRABYTES Ltd. is responsible for the day-to-day management of the network development, the development of its core services and core applications, and overseeing business-oriented aspects of the project.

In contrast, XTRABYTES Intellectual Properties Inc. (XIP) serves as the intellectual property owner for all creations produced by the XTRABYTES project.

As one might expect, a user includes any individual or company using the various applications that run on the network.

XTRABYTES earnings potential is extensive, as various opportunities exist for the entities within the XTRABYTES Ecosystem.

Income transfers include users paying XBY to application developers, developers paying XFUEL to access network services, and service providers paying asset providers for their resources. And that is merely a sampling of how entities might take advantage of the XTRABYTES earnings potential. Indeed, an entire economics system will exist within the network and yet remain outside of XTRABYTES control. As such, the various services costs, user applications costs, and asset provider fees within this network will follow the logic of a free market.

Nonetheless, two key instances exist in which fixed fees balance the earnings achieved between the various entities: the “Application fees” and the “Services fees”.

The “Application Fees Structure” refers to the entry-point of income within the network. In this instance, end-users are paying XBY, for the usage of decentralized applications (DApps) running on the network.

The “Service Fees Structure” refers to an important internal aspect of the network, the decentralized services enabled by the STATIC nodes. Developers will pay XFUEL for any associated services required for their application (or for their own network-related service).

The fees for these two instances are summarized in the following two tables. It is important to note that these fees may require some fine-tuning in the near future, particularly those that express different coefficients within the document.

The payment of these various fees will be regularly performed through smart contracts.

Various ecosystem actors can take advantage of the XTRABYTES earnings potential – as explained below.

STATIC node owners will be able to influence their earnings potential by deciding what services they provide to the network. As described in the table above, STATIC nodes will receive 50% of the total income earned by these services.

Nonetheless, individual STATIC node earnings will depend on several parameters:

All these parameters are combined in a SCORE factor:

and LB coefficient is:

and TL coefficient is:

Thus, the payout for each STATIC node is calculated as follows:

Ultimately, a STATIC node’s total income will equate to the income earned by each of the services it provides. Nodes that do not follow the protocol (for any reason) will have their earnings decreased or stopped, as reflected in the value of what will become their TRUST factor.

By defining the SCORE factor as such, the nodes have these following characteristics:

Simulation results of income for 512 Level-1 nodes, including 300 legacy nodes, 512 L2 nodes and 512 L3 nodes, all with the same reliability, activity and speed. Ratio and losses shown compare L1 blended nodes. Note that these figures are an estimation and will likely differ in reality given the effects of the other parameters (reliability, activity, speed and fluctuation in nodes broken/newly registered)

The table above also reveals the estimated loss of income likely to occur by breaking a node and re-registering a new one. For both legacy nodes and standard nodes, node owners have a strong incentive to keep their nodes operational (and for as long as possible given the age parameter).

This rule is meant to discourage the breaking of nodes for short-term market speculation, thus ensuring the network stability over the long-term.

The registration fee for STATIC nodes was initially proposed to reward both first adopters and long-term holders.

However, the current proposed services fees calculation achieves both of these goals more effectively by the node coefficient and LB factor:

As such, there will be no fee associated with registering a new STATIC node.

Asset owners will be able to earn income by providing their assets as a resource for the network. Assets consist of hardware required by the different services and can be computing resources (CPU & GPU), volatile memory (RAM) as well as storage capacity. Income will vary depending on the supply/demand balance. Anyone with a spare hardware/resource will be able to easily earn income.

Income as an Application Developer

Income as a Service Developer

XTRABYTES Ltd. will collect license fees from developers who use the XTRABYTES network.

License fees from service developers using the network will constitute 5% of the total income earned by their services. This license fee will be allocated to XTRABYTES Ltd.

All license fees will be paid in XFUEL.

License Fees (current intent – legal aspects have to be cleared out)

All profits from XTRABYTES Ltd. (i.e. after counting all corporate expenses, such as development and marketing costs, patents maintenance costs, taxes and so on…) will be forwarded to XTRABYTES Intellectual Properties Inc.

Dividends (current intent – legal aspects have to be cleared out)

This is a very complex process and must be investigated deeply before we can give any specific information in any regard.

A global overview of all different fee/cost flows is depicted in the diagram below.

The expansion of XTRABYTES may require entities in various part of the world to address the different markets. This is indicated as “XTRABYTES INTERNATIONAL” in the diagram.

To illustrate how XTRABYTES earnings potential can be split among the various entities in the network, here is an example.

Imagine a simple application (APP) that employs two services (S1 & S2). This APP automatically registers (thanks to S1) an image stored by the user in a database (stored in an asset A1 paid by S1), with its time tag (provided by S2).

The Service developer (S1) has to pay 1 XFUEL to asset provider A1 per 100 images stored.

The developer of the APP has to pay:

This developer has to pay in XFUEL for the services he uses, while he will be receiving, at the same time, income in XBY. For simplicity, let’s assume that the developer prefers to have everything in XFUEL and that the current exchange is 2 XFUEL for 1 XBY (as an example rate).

Accordingly, he will receive 2000 XFUEL, from which:

Service developer (S1) has received 1000 XFUEL and has paid 100 XFUEL to A1 for the usage of the storage asset, 500 XFUEL to STATIC nodes, and 50 XFUEL to XTRABYTES LTD. for the license fee.

Service developer S2 has received 300 XFUEL, and has paid 150 XFUEL to STATIC nodes and 15 XFUEL to XTRABYTES Ltd.

In summary, here is how the 1000 XBY (or 2000 XFUEL) entering the network will ultimately be distributed:

The economic aspects of the XTRABYTES network have been designed to provide an ecosystem with balanced and attractive earnings potential for its various entities. This leads to conditions where solid foundations facilitate an attractive and long-term resilient network of STATIC nodes which help to guarantee decentralization of its services and provide sufficient cashflow to support the costs of a robust and powerful infrastructure of global servers.

XTRABYTES™ goes beyond being a currency. It's a next-gen blockchain platform that allows DApps to be programmed in any language, utilizing a new and ecological consensus algorithm. Standard blockchain environments contain many centralization vulnerabilities, such as self-contained development, consensus methods, and coin monopolization. The XTRABYTES™ platform seeks to rectify these limitations by creating a truly decentralized crypto currency and applications platform.